A dying civil society sector in the midst of national crisis 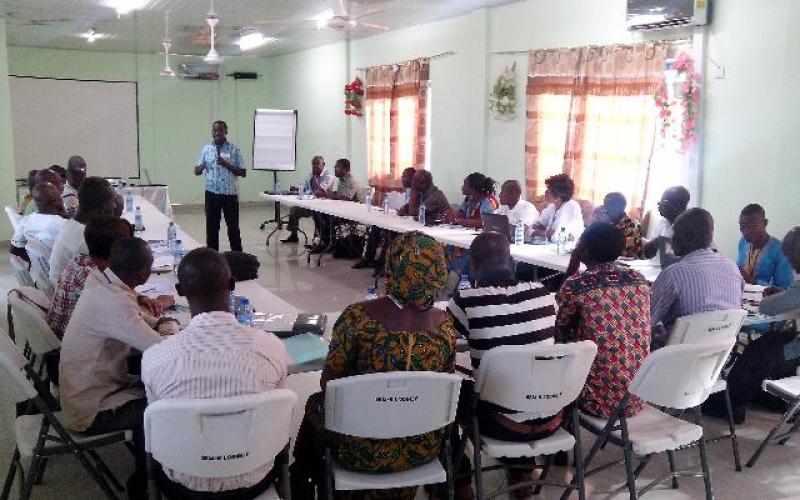 The article deplores the current situation of the civil society in Ghana where the sector seems to be silent on important national issues including the violation of women’s rights and the plight of poor people.

Recently, following the attack on a woman in a Midland Bank premises in Accra, Ghana (August 2018), the journalist, Linus Atarah posed the question, “Where are the women’s organisations in Ghana?” That set me thinking.

Some of these were undoubtedly, fronts for international non-governmental organisations like Oxfam, Action Aid, World Vision, Christian Aid and the like. However, in recent years, the influence and activities of these groups have waned.

They seem to be absent from national life, particularly, in the areas where they are needed the most.  They are noticeable by their silence. To put it mildly, the civil society in Ghana today is a pale shadow of its former self; failing to engage the powers that be to help shape the national agenda, and to speak truth to power.

In other African countries such as Kenya, Uganda, South Africa and Ethiopia, citizens groups react to abuse and maltreatment of women, children and vulnerable people with concerted action. Their anger is not limited to posts on Facebook.

In Kenya, when some irresponsible youth stripped a woman naked in public ostensibly because she was wearing a short skirt, women’s groups reacted with fury on the streets of Nairobi and other cities.

The same happened when a woman was not allowed to feed her child in the public area of a city hotel. Organisations like the Federation of Women Lawyers are proactive and defend women’s rights as they were set up to do. In Uganda, similar reactions from women’s organisations and their sympathisers can be expected. In Ghana today, these organisations are noticeably silent on issues affecting women.

Research conducted by Star-Ghana in 2013, provides a very revealing, but also disturbing analysis of civil society organisations in Ghana, how they are categorised and how donor funds are distributed to mostly Accra based civil society organisations (CSOs) led by the middle-class elite and big recognisable names (“The Political Economy of Civil Society in Ghana”, Star-Ghana, 2013). However, a review of this report is not a focus for this discussion.

My own investigations reveal that there are over 400 CSOs, broadly defined to include NGOs, community-based organisations, rural development and faith groups. These cut across the country as a whole, but with the large advocacy groups located mainly in Accra.

So, the argument cannot be that there are no NGOs or CSOs. They exist but for an agenda which is neither national nor pro-poor. It is sad, but has to be said, that most of the NGOs/CSOs are caught up in the current culture of grab and share. Others are also caught up in self-promotion of their leaders.

The National Union of Ghana Students has also lost its dynamism on the altar of personalised greed and aggrandisement; the Trade Union Congress hardly talks about workers’ rights these days. There is no left wing movement to champion the cause of the masses any longer, and any claim to the contrary is nothing but a ruse.

In the case of the recent incident involving a woman being beaten up in a Midland Bank by a policeman, many citizens expressed anger and angst. The usual Facebook commentaries took over and calls for action against the policeman for assaulting a customer at a Bank were many. Rightly so.

As usual, “celebrities” took over the debate from the operational tactics of some members of Ghana’s Police Service to monetary donations. Have we not been there before? But also know that this will not last long.

Prior to the Midland Bank incident, seven “Zongo” youth had been gunned down ostensibly for being “armed robbers”. Human rights organisations, if they exist in Ghana, were silent on this issue. As usual, the nation was fed the same state-sponsored narrative that they youths were “armed robbers” from the Zongo community in Kumasi.

Do we have a “shoot to kill” policy in Ghana?  Can citizens be gunned down because they are from the “Zongo”? Where are the human and citizens’ rights organisations to ask these basic questions and seek for answers from the state?

Early this year, a female child was subjected to horrendous rape by an adult. In our schools, boys and girls are raped and sodomised and often reported in the newspapers. Yet there is no concerted action by the civil society, particularly, human rights and children’s rights organisations. These organisations cannot claim that they have not read or heard about these incidents.

In fact, Pubic Agenda (www.publicagendagh.com), a national advocacy newspaper, regularly reports these disturbing cases of abuse and provides analysis on the incidents and what the government and civil society should do.

Civil society organisations and others like the United Nations Children’s Fund are aware these disturbing incidents, yet, unlike other countries, there is complete silence from the civil society front.

These apart, the increasing incidents of personal aggrandisement, institutional theft and corruption in state institutions should concern the civil society. In countries such as Kenya, the civil society supports the anti-corruption fight with mass public actions, demonstrations, and analysis of the nature of corruption.

In Ghana today, action is lacking where it is needed.  The anti-corruption campaign has been reduced to middle class discussions in closed environment (mostly hotels) to which ordinary citizens are excluded by language, issues of relevance and location, by the same groups of people, some of whom themselves are “fantastically corrupt”, to borrow the words of former British Prime Minster, David Cameron.

Any casual observer of Ghana’s governance will not fail to notice the partisanship, the lack of independent direct action against corporate corrupt elements either in Social Security and National Insurance Trust, the National Health Insurance Scheme, the Electoral Commission and the lack of accountability and transparency in the awards of contracts to both local and foreign contractors.

Presently, the ineffectiveness of anti-corruption is clear. These campaigns are led by a small coterie of ineffective actors cosseted in Accra and regional capitals, making ineffective demands with citizens acting as “spectators” and observers. Yet the result of corruption is evident in the bad roads, poor sanitation, and child labour, existing side by side with affluence of the obscenest type. Poverty of the nastiest kind confronts every citizen with a conscience.

In the rural areas, children lack the most basic facilities in what we call schools and some resort to sitting on the floor, competing with snakes, scorpions and rodents for space. They are also at the mercy of the rain and anything from above their heads. Child abuse is rife. Where are the education rights campaign groups? A few shiny classrooms in urban areas to provide our leaders with photo opportunities do not constitute a progressive education policy.

Years gone by, these would have been issues for the civil society to address with direct support in the form of school building or advocacy for the government to act. This is missing. Somehow, we have reached a saturation point where expressions of angst by a few citizens on Facebook are enough to tickle the conscience of present and past leaders.

The area of governance is even more disturbing. Our governance campaigns should encourage citizen involvement and participation but even this has been hijacked by corporate interest think tanks, political parties and urban-based organisations with access to resources.

The example of the stalled campaign and debate about the United States military bases in Ghana brings this to sharp focus. This should have been a national and broad-based affair, but some elite factions took advantage of popular resentment against this policy, hijacked the debate, hoping to reap the benefits of emerging national anger.

When it became obvious that the political party leading the “Ghana First” campaign was complicit in the initial decision to allow the United States access to Ghana’s soil, or that they could lose vast amounts of patronage from the United States, they quickly withdrew from the campaign leaving in the cold their most ardent supporters in the anti-military base campaign.

The most recent example of how far the civil society has come in Ghana is the appointment of the new chairperson of the celebrated flagship organisation, the Electoral Commission of Ghana. The civil society was completely muffled by the ensuing debate as to the rights and wrongs of the dismissal of Madam Charlotte Osei and her two colleagues.

The so-called “democratic governance” institutions failed to educate citizens on the issues and engage the government on the substance and suggestions as to how the president could ensure some transparency in the process of appointing new officers for the Electoral Commission. The response was, “we shall go to court”, but courts in themselves are not the avenues for resolving political differences.

Our governance is weighed down by corruption and lack of citizen participation. Citizen participation is frowned upon if it is done outside the remit of identifiable political groups. Independent voices and opinions are silenced, while all along the leaders of the civil society are eyeing the next big position in government under the aegis of their political parties.

It might sound churlish, but it is worth repeating that the civil society ought to be independent minded and managed by confident people with an interest in national development; fearless enough to take risky positions and speak truth to power.

Yet, what we see today are “vacuous careerists” some of whom have become “smiling supplicants of their own destruction”, allowing personal and political interests to influence their actions.

Today, what the civil society has become is a captive of the duopoly, which has monopolised Ghanaian politics and the state. Currently, the state alternates between “a social democratic” (National Democratic Congress) party and a centre of right political party (New Patriotic Party).  Leaders of the civil society are not different.

The lack of radical media to champion alternative development options and citizen voices also account for this malaise.

In countries such as Kenya, the civil society has champions, who write and discuss issues of relevance in governance, education, and society and speak truth to power. The Ghanaian civil society lacks such champions who can stand up to the occasion on issues such as our collapsing banks, or the abuse of children.

*Zaya Yeebo is a commentator on pan African issues, Editor of Public Agenda, and a founding member of the People’s Democratic Movement, an emerging party with a pan African and socialist orientation in Ghana.