Haiti: Roots of an uprising 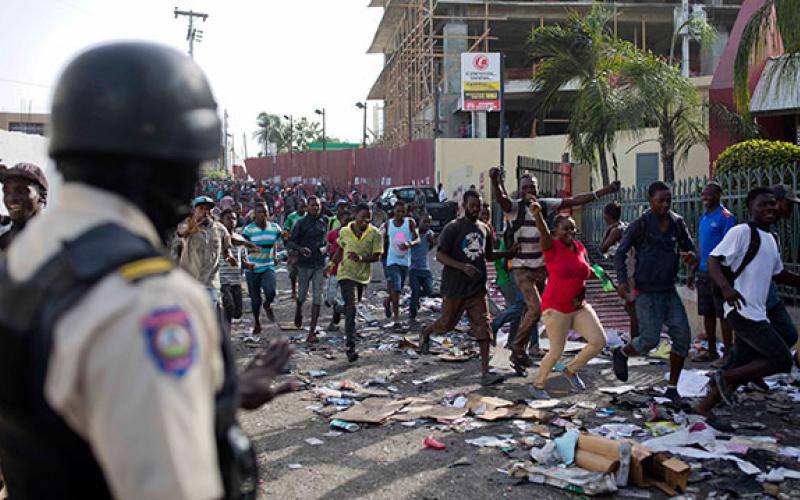 The cauldron of corruption and lies has been boiling non-stop 24 hours a day. The time has come to overturn it, for Haitians to begin to see the light of peace. Haiti is for all Haitians. – Fanmi Lavalas statement, 8 July 2018. Fanmi Lavalas is the party of former President Jean-Bertrand Aristide, Haiti’s first democratically elected president, and represents Haiti’s poor majority.

On 6 July 2018, Haiti exploded. By the tens of thousands, Haitians poured into the streets of Port-au-Prince to demand the resignation of President Jovenel Moïse. The protests were sparked by the government’s announcement that it would reduce or remove subsidies on fuel, leading to a rise of 38 percent in the price of gasoline, and that the price of kerosene would jump 50 percent to US $4.00 a gallon. The uprising spread across the country and lasted three days. Port-au-Prince was brought to a standstill. Protesters set up barricades in the streets, burned tires, and attacked stores owned by the rich. Luxury hotels in the Pétion-ville area were sacked by angry demonstrators.

In the immediate aftermath, the government rescinded the price increases (for now), and Prime Minister Jack Guy Lafontant – the same official who announced the fuel price hike – resigned. And a squad of US Marines was sent to Port-au-Prince, supposedly to increase security at the US Embassy, but also to send Haitians an ominous warning of what was to come should the protests continue.

The Moïse administration had waited until the World Cup to make the price hikes official, in the vain hope that Haitians would be so preoccupied with the festivities that they would ignore this attack on their already precarious standard of living. But the writing had been on the wall since February, when the new Moïse government reached an agreement with the International Monetary Fund (IMF) on an austerity package in exchange for US $96 million in loans. Even after the protests, the IMF insisted that the steep price rise was necessary, but that the price increases should be introduced more gradually. Clearly, the end of this story has not yet been written.

The powerful and militant popular upsurge caught the mainstream US media by surprise. Having ignored months of continuous demonstrations against the stolen elections that brought the current Haitian government to power, media outlets like The New York Times and Miami Herald could only guess at the underlying causes of the rebellion. Cable News Network focused its reporting on the plight of US missionaries who were “trapped” in Haiti. Media coverage was replete with the usual racialised code words: “rioters”, “looters”, “violence”

What was missing from the headlines was the fact that the Moïse government was already operating under a cloud of popular suspicion and anger long before the uprising. Birthed via two elections so replete with fraud and voter suppression that they were denounced, as an “electoral coup” by opposition parties, the current Haitian government has no legitimacy among the population. The first round of elections in 2015 was annulled after weeks of mass protests backed by Fanmi Lavalas, the party of Haiti’s first democratically elected president, Jean-Bertrand Aristide.

The overwhelmingly peaceful demonstrations were met by police clubs, chemical agents, tear gas and bullets, but the grassroots movement persisted, finally forcing the annulment, leading to a new round of presidential elections in October 2016. The new round was yet another charade, resulting in the inauguration of Jovenel Moïse as the new president in February 2017.

The electoral coup spawned a corrupt presidency. Even before being installed as president, Moïse was implicated in a money-laundering scheme after an investigation by Haiti’s banking watchdog agency. Dating back to 2012 when Moïse’s mentor, former president, Michel Martelly, was in power, money-laundering is said to have garnered Moïse over US $5 million. In one of his early acts as president, Moïse replaced the director of the investigating agency with one of his cronies for the purpose of suppressing the investigation.

Peasant organisers have also spoken out against Moïse’s expropriation of land for his banana plantation in northern Haiti. Not only did small farmers lose land; Moïse’s much-heralded banana exporting business now appears to have been a short-lived election image gimmick. In reality, US $25,000 was spent to export only one container of bananas worth US $10,000 to Germany. This is part of a pattern where government officials tout projects, get funding, take over land, and then pocket the money rather than develop the country’s agriculture or infrastructure.

In addition, a massive scandal has been brewing over the outright theft of US $3.8 billion in Petrocaribe loans given to Haiti by the Venezuelan government. Yes, US $3.8 billion. These funds were supposed to lower energy costs and fund education, agriculture and infrastructure, but they ended up instead in the coffers of government officials, including members of Parliament. “Where is the Petrocaribe money?” Haitians demanded in an anti-government demonstration on 24th August. Where is the money for hospitals desperate for supplies of blood and in need of new medical equipment? Where is the money for education, as families prepare to send their children back to schools with reduced or non-existent subsidies for school supplies and uniforms?

In the Artibonite region, the centre of Haitian agriculture, recent rains have led to dangerous floods due to neglected infrastructure, but sanitation workers have not yet been paid to clean up sewage canals and drains, while the hurricane season looms. In Port-au-Prince, police have burned down the stalls of market women, a particularly cruel form of gentrification tearing at the heart of Haiti’s economic life and the foundation of so many families’ ability to survive. Haiti’s prisons are now bursting at the seams, with one epidemic after another sweeping through overcrowded, nightmarish cages.

When Haitians took to the streets in July, they were demanding an end to all of this. In essence, they were letting the government know that there would be no peace without justice. They went far beyond the call to curtail the fuel price increase, insisting that the Moïse government had to step down. The protests were a reminder that Haiti’s popular movement — long the target of both the US government and the Haitian elite — remains viable and powerful. Despite two US-orchestrated coups against the administrations of former president Aristide, despite a sophisticated COINTELPRO-style campaign aimed at dividing and marginalising Fanmi Lavalas and its allies, despite 14 years of United Nations military occupation, despite stolen elections, and despite the grinding economic misery facing most Haitian families, the popular movement has persisted.

Why? This is a movement that has sunk its roots deep — and it remains the central force in the country capable of building an alternative to corruption and repression. During the years that Lavalas governments were in power, more schools were built than in the entire previous history of Haiti. Health clinics sprouted up throughout the country, as the Aristide administrations spent unprecedented amounts on health care. When the earthquake hit in 2010, killing over 300,000 and forcing over one million people to live under tarps in desperately overcrowded camps, it was grassroots activists who immediately went to work with limited funds to set up mobile health clinics and provide food supplies.

In the wake of the devastation unleashed by Hurricane Matthew in 2016, Fanmi Lavalas organised caravans to provide aid to the affected regions. As living conditions have spiralled downwards, grassroots organisations have stood with the poor — backing striking teachers, garment workers and students, supporting market women as they defend themselves against government attack, increasing the reach of independent media to combat the lies of the elite-run radio and television stations that dominate Haiti’s airwaves.

One prime example of the movement’s vision for a democratic and inclusive Haiti can be seen in the work of the University of the Aristide Foundation (UniFA). Founded in 2001 as President Aristide began a new term in office, UniFA’s medical school was violently shut down after the 2004 coup, its campus taken over by US and United Nations occupying troops. When President Aristide and his wife and colleague Mildred Trouillot Aristide returned to Haiti in 2011 from forced exile in South Africa, he announced UniFA would be reopened and expanded. As promised, seven years to the day since the Aristides’ return, UniFA held its first graduation ceremony.

With over 1000 people in attendance, UniFA graduated 77 doctors, 46 nurses and 15 lawyers. Many of the graduates were recruited to the university from poor communities that have had little access to higher education. Already, UniFA doctors are working in areas that have rarely, if ever, seen a doctor before. With 1600 students now studying in the fields of medicine, nursing, law, engineering, physical therapy, and continuing education, this is only the beginning, a microcosm of the kinds of advances Haiti could make with a true people’s government in power. The contrast could not be more stark — education or militarism, democracy or authoritarian rule, inclusion or exclusion, development or corruption, self-determination or occupation. With the July uprising, the Haitian people have once again made known their choice.

* Robert Roth is an educator and Co-founder of Haiti Action Committee. He can be contacted at <[email protected]>.