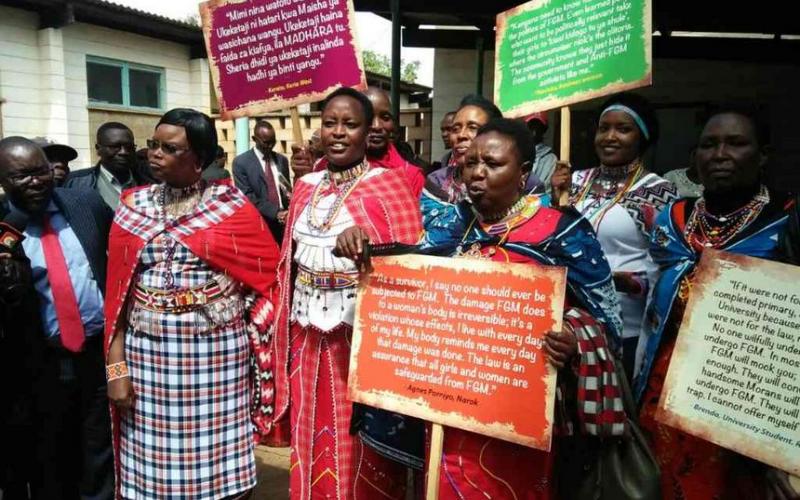 A doctor pushing for the legalisation of FGM told a court on Thursday that she was tired of "unending expert witnesses".Tatu Kamau told a Machakos court that she had been receiving affidavits from these witnesses by email almost every day. It has become difficult to respond to them, she said when the case was mentioned, noting they have been sent since she filed her petition.

"I don't know when this will stop because I am beginning to get tired."

Presiding Judge David Kimei was quick to inform the petitioner that she ought to have prepared for such as the case is of much public interest. "It's okay for interested parties to file affidavits since we are still in the pre-trial process. This is a matter of public interest so we cannot lock out anyone interested in the matter," Kimei said.

The lawyers of the respondents and the nine interested parties demanded to know whether one Arap Koech will be seeking legal representation. Koech is the 10th Interested party in the case and is supporting the doctor. The lawyers wanted to know how they will get him to reply their affidavits. Koech, an elderly man, caused laughter when he emphasised that he was capable of engaging the lawyers personally so he will not seek any legal representation. He gave them an email address by which to reach him.

The judge had warned Koech that the court was not a place of public opinion but one of strict procedures. “I want Koech to be guided well because whatever he is submitting now is going into the record," he said. The parties were given 21 days to file their responses to affidavits and written submissions on whether the case should be heard by a three-judge bench.

The case will be mentioned on June 11. A group of Maasai men and women camped outside the court on Wednesday and today, waving placards with messages against the illegal rite of passage. Sofia Leteipan, a lawyer with Equality Now who is one of the interested parties, told journalists outside the court that they were determined to win the case.

Leteipan noted Female Genital Mutilation is a violation of human rights so it should not be permitted. Other interested parties who are against the petition include Amref Health Africa, Federation of Women Lawyers (Fida), Center for Rights Education and Awareness Africa, Katiba Institute and the Office of the Director of Public Prosecution.