South Africa: time for our bank? 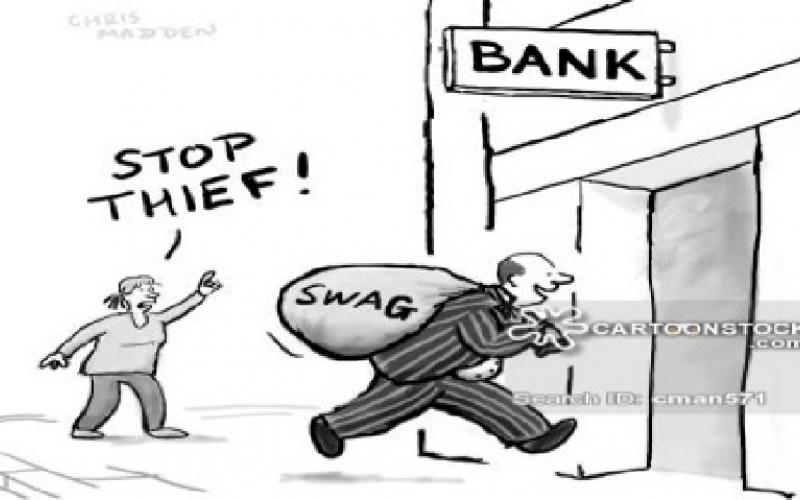 With ever-rising interest on loans in South Africa, there are growing calls to create community banks that use the "profits" to the benefit of community members, and not to continue enriching billionaire bank executives.

It is a nationwide legal sting. South Africans are conditioned to paying out their hard-earned cash without question to support the system.

Had the same house been bought in Malaysia or Australia where the rate is below five percent, the interest paid would have been less than 90,000 units.

With South African car loans, the interest rate is higher still because the asset is not as resalable and as vehicles quickly lose value the repayment period is shorter; typically three to five years. Using the First National Bank repayment calculator at 12 percent over five years, an R100, 000 car will cost R139, 218 [[ii]].

Whatever the loan, the principle is the same. For the privilege of going into debt to participate in the economy, the borrower pays into the banks’ private-members’ box.

It is “… a cruel irony,” said (then African National Congress—ANC General Secretary) Blade Nzimande in 2009, “… after more than 15 years of democracy … why do we still live in a society in which the legacy of apartheid appears to be constantly re-produced and even expanded?”[[iii]]

Ten years further on and the ANC still battles to distinguish between apartheid and Greed Capitalism and fails to grasp that, although all have a vote, there is no democracy while a Greed Capitalism system is in place. It is an elite-group-run financial dictatorship.

The goal of Greed Capitalist corporations is the maximisation of profits no matter the cost to humanity or the environment [[iv]]. Capitalism is the best system we have. Communism (in all forms) failed. Socialism without an ownership component has only succeeded where powerful-accepted leaders direct.

But the current variant – Greed Capitalism as described in my O.B.E.S.E. article – is destroying South Africa. The destruction is visible daily, as the difference in fortunes between powerful ANC cadres and their corporate business friends and the rest widens. South Africa is already the most unequal of all societies.

It has nothing to do with white supremacy … it is elite – black and white – greed made legal by a system managed by private business, authorised by government.

A Standard Bank share bought in July 2002 and sold in (February 2018) appreciated by over 700 percent (Google charts). The profits supporting the share rise comes out of some customers depositing and others borrowing money.

Shareowners don’t have to do any work. They profit merely by buying into the sweat and tears of South Africans who have little option but to use banks. The investor [[v]] doesn’t have to fix broken pipes, cut any lawn or pay levies, maintain the car/save taxi fare or negotiate with the hospital or school uniform supplier. All they do is collect dividends on top of the spectacular share price rise. Their agony lies in deciding when to sell – or hold.

Generosity for “investors”, a slap in the face for those who make the banks’ profits.

The customers are struggling South Africans while Nedbank’s biggest shareholder with over 50 percent is (ultimately) Old Mutual Plc. That’s the company that left South Africa for London when “democracy” came in 1994.

Standard Bank has now the giant Industrial and Commercial Bank of China holding 20 percent with other foreign institutions (Old Mutual is there too) having nearly nine percent. It is complicated but it seems First National Bank is ultimately controlled by Remgro [[vi]] of the Rupert family – that is how private these banks are. And foreign. Barclays Plc, the 17th biggest bank in the world [[vii]], is parent to Barclays Africa and is the parent of Absa Group Limited (Wikipedia).

At nation-level, the effects of money flowing out of South Africa verge on the catastrophic level: Professor Patrick Bond of the University of Witwatersrand noted, in 2016, that the “balance of payments deficit that results from profits, dividends and interest flooding out is the main reason that we have such a huge current account deficit”[[viii], [ix]].  It is also one of the reasons the Rand was crashed … from R8.92 to the US $ in 2013 to R14.30 in November 2017.

As money leaves, the home-situation gets more desperate. Money must stay to circulate … the concept is simple: What one person spends becomes another’s income.

As the ANC, with its open (financial) border policy [[x]], has allowed the money to fly away, that money is not here to be spent in South Africa. It is likely circulating on the Isle of Man, London, Bern …

Disappearing money raises living costs, pressurises wages, and still the high interests on loans have to be paid. And that is not the full story.

The interest demanded was never money in the first place. The bank simply declared (because it can, because we allow it) “R100, 000 is credited to your account to pay for the house. You must pay it back.”

Surely, the word “interest” is wrong? “Tribute” is an older word, which broadly means the “tax or plunder” due to the stronger for allowing the weaker to live.

That R229, 000 is not real money. It was never worked for or manufactured in a factory. In fact it does not exist until the borrower pays. That is damaging enough.

The crippling blow is two-fold: The borrower pays back real money, money that is only found within the community he or she lives. Every tribute payment takes hard-earned money out of South African societies’ economy. Instead of spending the money in the community to make someone else’s income it is being given for no logical reason to the bank. It is the system South Africans voted for.

The two examples, Malaysia and Australia rank in the top ten for safest living: South Africa suffers from endemic poverty and crime that make Gaza appear tame. Rather than fix the problems (and one way is to introduce more money into society) the government’s message to investor-speculators is

“Don’t worry, be happy – you’re getting a risk premium of ten percent. Our poverty struck, sunk in crime, South Africans will pay.”

We will pay all right because with the system we can only sink deeper.

In those 30 years, the children have grown up. They are looking for a similar house, but it will cost R1 million plus. They will need a minimum monthly income of around R30 000 (US $2500), and they will pay over and above the purchase price an extra R2 .159 million [[xiv]] by the end of their 30 years.

The banks are doing well – for themselves. Revenue earned per employee for Nedbank (for example) amounted to R3 million (US $ 250000).

What if it was recognised that …Citizens need work to pay for housing, transport, education and so on, because they need housing as a family base to get to work to earn money. They need transport to get to work. They need half decent food/medical and so on to be able to work productively. They need to improve themselves and to educate their children so that those children will be equipped to fight for the few jobs available so that one day they will be in a position to have a house near their work place to work … and so the cycle should repeat. But it doesn’t.

The system devalues the remuneration paid for the work done; the inflation component makes it harder for all. What was once just a cabbage is now so expensive; it is a buy-leave decision.

Whichever way the issue is examined, all South Africans from middle class down are under the whip held by those occupying the owner/share-owner/manager seats of the system. It is a system that demands the maximisation of profits. The system drivers are private banks.

Is it not time to support community banking?

South Africa is not a super-rich, highly productive first world nation. South Africa has been stripped of resources, left totally unable to compete and when it wants to do anything it is cajoled to borrow first world money on first world conditions. The country cannot afford it – collapse draws daily nearer.

But – South Africa can start to change all of that. It can initiate change at the individual–community level and there is a feasible and sensible alternate: community banking [[xvi]].

Even if initially the only change made is that the tribute paid on those home and car, medical and schooling and so on loans goes into the community – into local clinics-schools-roads-environmental protection and job-creation – then forming Our Bank, a public bank, to do that is worth discussing about.

“Of course, there are critics... They argue that public banks would put public money at risk. Would you be surprised to know that most of the critics are bankers?” said David Weidner, financial advisor at Morgan Stanley. [[xvii]]

*Douglas Schorr is author of The Myth of Smith, which is available on Amazon Kindle

[v] They’re not investors. They’re owners as long as the money returns are good.

[ix] South African tax services are sweating to nail taxpayers who have taken much needed capital out of the country illegally while laughing legally though clearly as immorally, are the banks and the shareholders.