Home » Advocacy & Campaigns » Tackling police violence and impunity in Kenya: Give the Constitution a chance

Tackling police violence and impunity in Kenya: Give the Constitution a chance 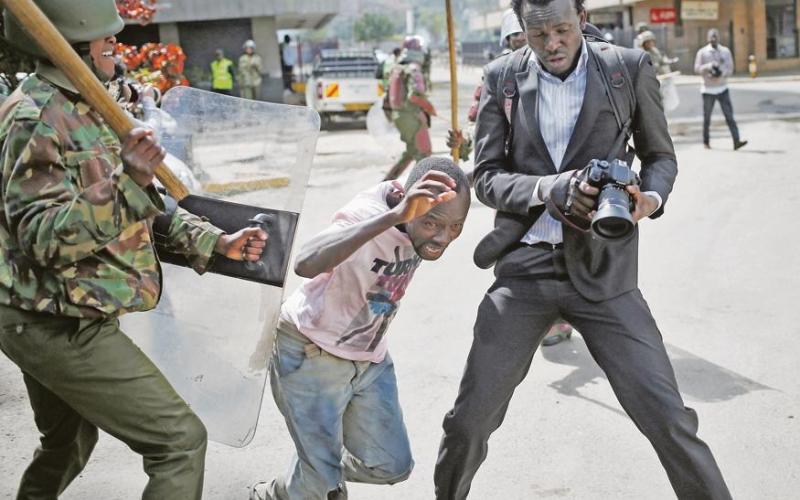 The article explores the problem of police violence in Kenya and links it to the structural conditions, informed by colonial legacy and most recent failure to de-colonise and democratise policing. Particular emphasis is placed on Constitution, adopted in 2010, and how its radical potential for police reform was wasted by current administration.

On June 23, lawyer Willie Kimani and his client were murdered because they tried to challenge police violence.

This story is a story of three Administration Police officers, who thought they would get away with murder, but it is also a story of systemic failure of the government to carry out meaningful police reform.

Kenya has a problem with police violence that often escalates into outright criminality. Every now and again familiar stories break out: the police brutally dispersed protesters, the police tortured an unlucky suspect, a person last seen in police custody is found dead. This is the new norm. The abduction and murder of Willie Kimani, Joseph Muiruri and Josphat Mwenda is just an extreme case of what many Kenyans know to be routine. Beyond the everyday media revelations it is the well-researched reports by human rights commissions and NGOs that lay bare the landscape of police violence.

Last year Kenyan National Commission on Human Rights (KNCHR) came out with a damning report on police violence. The report meticulously documents over 120 cases of gross human rights violations, including multiple cases of torture, enforced disappearances, extrajudicial killings, arbitrary arrests and other violations of detainees’ rights. Other reports suggest that Kenyan police are very trigger-happy. The 2014 study by Independent Medico-Legal Unit (IMLU) found that the police were responsible for 1254 out of 1870 (67%) guns related deaths between 2009-2013. IMLU asserts that most of these cases are unnecessary and illegal use of lethal force by the police. Based on IMLU’s own records and investigations, out of 199 people killed by the police in 2014, 181 were summarily executed, while only 14 were shot to protect life. A similarly gruesome statistics continued into 2015, when out of 97 cases recorded by IMLU, 85 were summary executions. These reports severely undermine IG Boinett’s most recent assertion that the police do not permit extra-judicial killings.

The police leadership tends to either dismiss these reports as “cheap propaganda” or blame it all on a “few bad apples”. The “bad apples” excuse is particularly dishonest, since it diverts public’s attention from the functioning of the police as a system to the conduct of the police as individuals. It obscures the patterns of police violence, conceals the culture that permits the violence, and offers wrong solutions that have little long-term impact.

To be clear, punishing police officers involved in lawyer Kimani’s abduction and murder is absolutely the right thing to do, but to prevent this kind of crime from happening again other steps must be taken as well.

Make no mistake, the problem of solving police violence is not (only) about rooting out violent individuals from the Service. Granted, every police force in the world has a few maniacs in it, but most police officers who beat up and harass others are no different from the rest of us, with their daily routines and struggles, holiday plans and doing their best to make the ends meet. It is their uniform that they use for taking licence with the law and abusing it.

How does the power, intrinsic to being a police officer, translate into brutality and violence? And what solutions are there to tackle this problem?

To answer these questions we must look at the police as an institution, with its own culture, collective memory and established ways of doing things.

Colonial policing: Kenya’s past and present

Kenyan Police has inherited British colonial police’s mind-set and a culture of heavy-handedness and impunity and years of dictatorial rule did not improve the situation. The Colonial police had one goal – to secure the interests of the dominant class. Their primary responsibility was to control populations, rather than protect them. Particular emphasis was placed on physicality and harshness – both toward the public and within the rank and file. Extremely hierarchical and racially colour-coded for white domination they were held to strict discipline, trained to be obedient to the regime’s orders, and harsh with the subjects of the colony. Physically strong, they had to be deliberately isolated from their communities so as to maintain the Crown’s authority by all possible means, including violence. They answered only to their own and to the regime’s bureaucracy not to the constitution as they must do now.

Present day policing continues with the stamp of this colonial legacy, upon which is a fat layer of a history of impunity and abuse that comes down from the post-colonial dictatorships (don’t forget that we are the creatures of our own sins). From extortion of money from drivers to brutal dispersal of protests, the vulgar display of power by the police is omnipresent and very visible.

It needs to be understood that this kind of irresponsible and often inhumane police conduct is illegal. The National Police Service Act outlines when and how the police can use force and firearms and the criteria are clear and tight. Often heard excuse that the police are just following orders from superiors is not satisfactory either, since the law requires them to follow only lawful orders. Thus, the police are either ignorant of what the law requires of them, or they violate the law knowingly in the name of security or what have they, and it is difficult to say which excuse is worse.

Undeniably though, if impunity in the police was dealt with, if police officers were hold to account on a regular and systematic basis and not only when there is  country-wide outrage, it would be a deterrent that could transform the culture of impunity and violence.

Does Kenya have such a deterrent? Yes, but it’s broken. Or rather, it was broken, intentionally and cynically.

The rise and fall of democratic police service in Kenya

Five years ago Kenya adopted a new Constitution. It was a product of years-long struggle for a cornerstone document that would amalgamate and channel hopes, desires and aspirations of millions of Kenyans. Drafting process was a bottom-up, grassroots effort characterised by broad consultations and widespread participation and support. A people-powered constitution was quickly recognised as one of the most progressive in the world. Predictably it upset political elites.

The Constitution envisaged (among other progressive things like a impressive Bill of Rights) an overhaul of the police force – one institution that was blamed the most for perpetuating violence and injustice in the past. It started with renaming police force to police service, a significant shift in language to reflect the desired change in mind-sets of police officers.

Next year, a number of laws were adopted to give substance to Constitutional provisions on policing. New police structures were designed in a way to make the police transparent, accountable, professional and, generally, human rights-friendly. The notion behind all this was to make sure that the police were not creatures of whoever was in power but a real upholder of the law in service of the law and deserving of the public’s trust.

The Executive could no longer command the police around or influence it in other ways thanks to the National Police Service Commission (NPSC) – a special independent commission responsible for recruitment, appointment, deployment, transfer and dismissal of all police officers. Security of tenure for top cops and beat officers alike was also safeguarded by NPSC, so that the police officers of all levels would be certain that the only way they could be sacked was by independent commission and according to clear-cut procedures.

To clean up the police from officers who lack integrity and professionalism, NPSC has initiated an ambitious vetting exercise. However, reports of political meddling and interference started pouring in almost as soon as it commenced.

Accountability was given a paramount importance with creating an internal unit to investigate minor complaints against the police and a special body – Independent Policing Oversight Authority (IPOA) – to investigate serious injury or death inflicted by the police. Community policing was incorporated into the law to help communities and the police to work together to deal with crime and community problems together. From the institutional point of view, the system was one to die for – an independent police service with all imaginable checks and balances gave a promise of better times to come.

However, in 2013 the same very people, who opposed the new Constitution came to power. The Kenyatta-Ruto alliance almost immediately began to roll back the gains brought about by the Constitution and the new police laws. One could be forgiven for believing that the new government has acted in a way as if the new Constitution has never been adopted.

For instance, police recruitment was challenged in court and subsequently nullified because widespread corruption and violations of law took place, but the President, in defiance of his Constitutional mandate and the court order, directed the recruits to present themselves to police colleges anyway. Furthermore, to get more control over the police, the ruling coalition  has amended police laws twice in 2014 alone. Hastily adopted infamous Security Laws (Amendment) Act did away with the independent procedure of appointing and removing Inspector-General of Police (IGP). A new IGP was appointed by the President with a nod from the Parliament shortly afterwards.

In another recent development, the President singlehandedly sacked Deputy IGP Grace Kaindi in violation of the Constitution and already emasculated police laws, which led to another court battle against the administration. The outcome is yet to be seen, but new Deputy IGP was appointed nevertheless.

Meanwhile, the ruling coalition wastes no time – on 1 October 2015 a new Bill was tabled in the Parliament to change police laws again, this time giving the President full powers to appoint and dismiss four seniormost police officers – IGP, Deputy IGPs and Director of Criminal Investigations Department. The Bill sought to further entrench Executive’s control over IPOA by giving the president a power to remove members of the body’s governing Board. The Bill was defeated, but it illustrates the length the Executive is willing to go to to establish full control over the police.

Through changing the laws and political meddling, the ruling coalition have also normalised many of police malpractices and severely weakened police accountability mechanisms. The public is the one that is paying the price of all these political machination by being the victims of increased police brutality. Knowing that it is unlikely to be held accountable for your actions, it is easier to give unlawful orders and to follow them.

Give the Constitution a chance

As it often happens, the solution is right before our eyes – respect the Constitution and go ahead determinedly with the police reform it envisages. This solution requires courage on the part of the government to do what is right – to repeal the laws that undermine police accountability, stop interfering with the police’s work and the work of police oversight commissions and commit to building their capacity to do their job.

This is the only way forward. Unaccountable, non-transparent and partisan police will not correct its past record and will not transcend its culture of violence. You know that the system is broken when the people who are here to protect you are, in fact, the biggest security threat to you and your family.