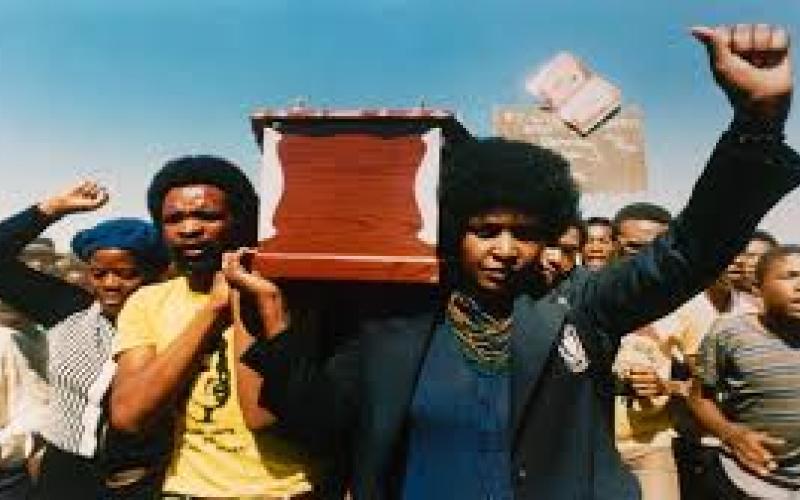 Among the titans of dignified defiance to white settler apartheid rule, was Winnie Madikizela-Mandela  – who not only kept the name of Nelson Mandela alive in the international public consciousness for 27 years – but was a charismatic leader in her own right who remained committed to the people of Azania/South Africa.

Unlike many of the African National Congress (ANC) leaders at provincial and national levels who have taken power since 1994 and lined their own pockets at the expense of the people, she lived in Soweto – one of the largest African townships in the country, which is her testament to the Cabralian philosophy that the radical elements of the African petite bourgeoisie must commit “class suicide” in a dedication to live among and with the people rather than in gated communities that alienate and privilege them from the people. She was “grounded” with her people and helped organise a clinic, school and day-care centre in Soweto – among many other community initiatives that she supported. By the time Nelson Mandela was released from prison in February 1990, she had a huge following in her own right and until her death on 2 April 2018 at the age of 81.

Fundamentally, Winnie was ideologically aligned to the most radical elements within the ANC and also the wider black South African society who were disenfranchised, unemployed and illiterate in the squatter camps and townships who represented a powder-keg in volatile apartheid society. She was also prescient in her analysis during the initial power sharing negotiations between the ANC and the apartheid regime, which she referred to as a collaboration between “the elite of the oppressed and the oppressors” and indicted the ANC leaders of “the distortion of a noble goal in favour of a short-cut route to Parliament by a handful of individuals.” How perceptive she was in castigating elements of the ANC leadership for being seduced by “silken sheets” and cautioning back in 1993 that the violent anger once directed against the white minority could turn against an out-of-touch black government someday!

Imprisoned for 491 days under the brutal regime Winnie Mandela remarked:

“The years of imprisonment hardened me... I no longer have the emotion of fear... There is no longer anything I can fear. There is nothing the government has not done to me. There isn’t any pain I haven’t known.”[[i]]

The human dimension of revolutionary struggle, its impact on human relationships and the human psyche in terms of emotional, psychological and spiritual damage is rarely and openly discussed in radical circles as well as how to address their effects. Yet, no struggle can succeed if such aspects are not dealt with as wounded people are expected to construct a new society. The reality is, crippled human beings may eventually create a crippled society in which nothing genuinely changes unless we deal with the human aspects of struggle on an individual and societal level.

Undoubtedly the Western media and the apartheid state vilified her (and continue to do so). For example, the obituary in the white supremacist Economist magazine characterised her as  “a dangerous woman” and “Soweto mafia matriarch.”[[ii]] She was indeed a threat to the apartheid political system because not only was she seen as representative of the ANC, a banned organisation perceived as a terrorist organisation during the decades of white minority rule, but she was also perceived as radical African woman who had to be silenced, subdued and subordinated to white male patriarchal domination. And Winnie refused this with a phenomenal steely defiance in the historical tradition of Queen Nzinga of Angola who for four decades valiantly resisted the Portuguese enslavers in a similar tradition of Sojourner Truth and Nanny of the Maroons who both defied white supremacy and enslavement in the USA and Jamaica respectively.

The same patriarchal Western media expected on the release of Nelson Mandela that Winnie would return to the kitchen and remain the silent dutiful wife. Archbishop Desmond Tutu also made a similar patriarchal assumption when he rebuked Winnie for refusing to be the good wife and bring Mandela his slippers. Those same patriarchal double standards also played themselves out when Winnie Madikizela-Mandela was expected to remain celibate whilst her husband remained incarcerated and she had a relationship with the lawyer, Dali Mpofu, who was half her age. [[iii]]

Ultimately Winnie Mandela was not only an icon of revolutionary resistance to apartheid hegemony but she was also – like us all –a flawed human being. Some of her judgements and pronouncements are with hindsight gross errors that have been magnified by her enemies and detractors who are threatened by her revolutionary politics and vision for South Africa.

As the great Pan-Africanist, Tajudeen Abdul Raheem wrote about Winnie Mandela in his Pan-African Postcard on the occasion of her 70th birthday:

“The crux of the matter is that Winnie is generally judged by many people as a woman, wife and mother, not as a politician. How many men we greatly respect and admire – and, at the risk of heresy, Madiba himself – would still be standing if we applied the same gendered judgement about them? If the situation had been reversed and Winnie was inside and Mandela was outside would anyone have been surprised if he took an interest in other women?”[[iv]]

She was convicted of fraud in 2003 and being an accessory to kidnapping in the controversial case of the 14-year-old Stompie Sepei in 1991. The boy was allegedly falsely accused of being an apartheid spy and died at the hands of Winne’s football club, bodyguards and driver. Another controversial stance that placed her in opposition with fellow ANC comrades was her support for “necklacing” suspected traitors by placing a tyre around their necks, saturating them with petrol and setting them alight.

Despite her imperfections and misjudgements, Winnie Madikizela remains a “sheroe” of mine, for we need a new generation of Winnie Mandelas in the 21st century, willing and able to take up her legacy in forging a united Pan-Africanist Africa.

* Doctor Ama Biney is a scholar-activist and Pan-Africanist living in London, United Kingdom.

* This article was first published by the PACM in the United Kingdom.