Home » Arts & Books » Can the working class change the world?

Can the working class change the world? 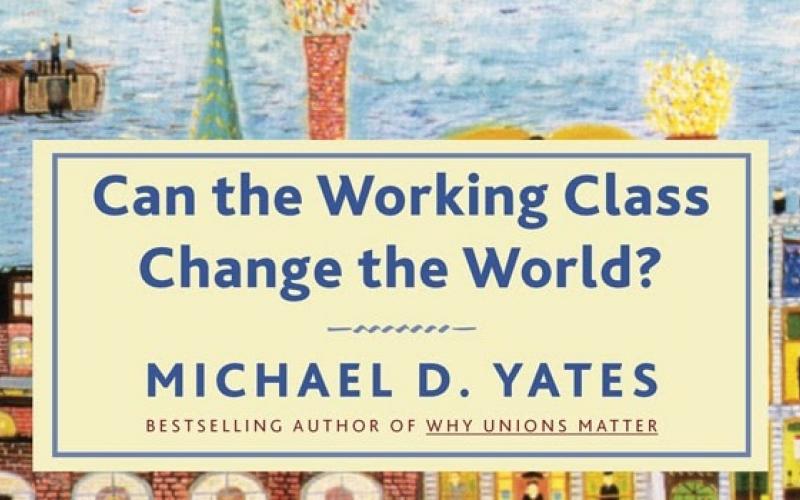 This is part one of a seven-part series introducing the review of Can the Working Class Change the World?

Can the working class change the world? It is a fundamental political question in every economy and society, relevant to all concerned with and aware of class interests tangled in exploitative production relations. Politics in countries has centred on this question of class power. At times, the question has shaped geopolitics on the world stage. Michael D. Yates re-examined the question in his recently released book Can the Working Class Change the World?[[i]]

The question is not limited to a single country or region; neither is it concerned with a few branches of economy. The question, rather, covers all countries and societies, encompassing the entire economy and all of politics. Sometimes, the question stays invisible to ordinary political minds, and at times and in countries, it stands bold in the centre stage of politics. The issue is rooted in the arena of class struggle, and is concerned with the destiny of world humanity, because, capital in its constant contradiction with labour is unceasingly pushing the world to a sphere named destruction. Thus, the question raised by Professor Michael Yates is universal, and is concerned with the universe.

Michael Yates, director of Monthly Review Pressand former Associate Editor of Monthly Reviewmagazine, re-examines the question analysed and discussed by Marx and his comrades; he like they understands that this question concerns the life of the overwhelming majority of the world’s population – the exploited, the working classes. The professor of economics had to embark on the question, given that the world working class is still marching through the path of history, has experienced many developments since its victories of historical significance in the short-lived Paris Commune and in the Great October Revolution in Russia, which shook the foundations of bourgeois civilisation.

The world working class has gained experiences from China in the east to Cuba in the west, from Indonesia in the south to Sweden in the north, in Venezuela, Bolivia, Nepal. There are experiences of victory, of setbacks, of compelling capital to come to compromises, and of defeating Fascism, the worst part of decaying capitalism. The achievements and advancements the working class has made have been unprecedented on the world scale. These strides on the march of humanity toward liberation have improved life and brought relief, positively impacting all the exploited and broader sections of people in countries. These are, as Michael Yates writes in the preface of the book, “a great deal in nearly every country in the world.”

Also there are experiences of the working class that include capital’s brutal assault on rights and life under the streamer of neo-liberalism, sectarianism, supremacist politics, austerity, and dismantling of welfare measures in many countries. Michael Yates, a labour educator for more than 30 years, writes in the book:

“Capitalism […] and those who control its operations are relentless in their efforts […] to beat back whatever gains […] working class political organisations have won. With rare exceptions, the power of capital has remained intact. Gains made have soon enough been taken back. Victorious revolutions have, in time, been reversed.” (“Preface”)

No doubt, the reversals, the losses, are sources of lessons for organising the next assault on the world capitalist system. To learn from the lessons, the question should be asked: How have the gains made so far been taken back?

With this backdrop, Michael Yates, a regular participant in the labour’s struggle against capital, proposes a strategic move: “[F] undamental, radical change, […] will not happen unless the working class and its allies attack capitalism and its multiple oppressions head-on, on every front, all the time.” (ibid.) It is a political plan that concerns strategic and tactical questions, areas of organisation, allies, political moves, and theoretical discourse.

Michael Yates sets the tone of the book by narrating, in brief, incident of selling of his labour and organising the labour, both are related to survival:

“I joined the labour force at twelve and have been in it ever since, delivering newspapers, serving as a night watchman at a state park, doing clerical work in a factory, grading papers for a professor, selling life insurance, teaching in colleges and universities, arbitrating labour disputes, consulting for attorneys, desk clerking at a hotel, editing a magazine and books. I have spearheaded union organising campaigns and helped in others. For more than thirty years, I have taught workers in several labour studies programs, people in every imaginable occupation, from plumbers, bricklayers, postal employees, chemical workers, garment workers, and elevator operators to librarians, nurses, air line pilots, fire-fighters, and teachers. I once worked for the United Farm Workers Union, meeting campesinos and campesinas and helping them in legal disputes and collective bargaining.” (ibid.)

His class origin is also told, in brief, in the preface of the book:

“By any imaginable definition of the working class, I was born into it. Almost every member of my extended family – parents, grandparents, uncles, aunts, and cousins – were wage labourers. They mined coal, hauled steel, made plate glass, laboured on construction sites and as office secretaries, served the wealthy as domestic workers, clerked in company stores, cleaned offices and homes, took in laundry, cooked on tugboats, even unloaded trucks laden with dynamite.”

More than a hundred years ago, Lenin wrote:

“There is nothing more important to class-conscious workers than to have an understanding of the significance of their movement and a thorough knowledge of it. The only source of strength of the working-class movement – and an invincible one at that –is the class-consciousness of the workers and the broad scope of their struggle, that is, the participation in it of the masses of the wage-workers.”[[ii]]

Rich with information, data, analysis, and arguments, the book unfolds issues facing the working class today. Brutal austerity programmes were imposed on the working people in countries following the Great Financial Crisis. The dominating capital successfully transferred the burden of its sin – financialisation, banking/housing/credit crisis – on the working class; and the working class organised resistance to that hostile move by capital. However, those were sporadic, isolated, sudden outbursts, and of short duration. In the area of politics in a few countries, hard-core bank capital representatives were isolated away in elections following the crises. Greece jolted the European Union with its election result. But, those were of very short duration. Ultimately, the bankers prevailed.

Nevertheless, the crisis of/in capitalism persists. But, the working class is yet to organise effective barricades with a working-class leadership – a leadership equipped with a radical programme for crushing the citadel of capital – although imperialism is in a continuous problem within itself, that is, it is subject to severe contradictions. In some areas, imperialism is making temporary retreats, while it is organising assaults in some other areas.

Capital, craftily, has organised/is organising its extreme right wing – xenophobes, neo-Nazis, regressive elements, armed forces with a Middle-Age ideology – to hoodwink the working population in countries irrespective of the level of economy, advanced or backward. It is a new challenge to the working class.

Capital is fuelling sectarian politics, another extreme rightist move. A part of left/progressive political forces is sticking to sectarian slogans in the name of standing by the marginalised as this brand of the “progressives” is trying to make one sect or other its political base. Unions, shamefully, based on colour are being run – a theoretical bankruptcy of a part in the rank of the working class. Even, the practice goes on without any debate.

Many people’s organisations are yet to discuss imperialist intervention in countries. A few of them, even, extend support to or prepare ground for imperialist support under the guise of defending/restoring bourgeois democracy.

The same with the concept of democracy – many working class organisations do not discuss the issue of democracy from a class point of view, which makes them easy prey of imperialism-designed propaganda carried out for the marketing of bourgeois democracy.

In this reality, a reality filled with confusing currents of bourgeois ideas, Can the Working Class Change the World? presents a worldview of the working class related to the task of changing the world.

Michael Yates, whose academic fields were labour economics and the relationship between capital and labour, deals with issues concerning the changing of the world by the working class in his 216-page book with six chapters. The chapters are: “The working class”, “Some theoretical considerations”, “Nothing to lose but their chains”, “What hath the working class wrought?”, “The power of capital is still intact”, and “Can the working class radically change the world?”.

Michael Yates not only answers his question with a resounding “Yes,” but insists that the working class must change the world. Our very survival as a people and a planet depend on it. What makes this book invaluable, however, is […] Yates’s clear-eyed, global analysis of capitalism (historically and in its latest form), the social and environmental consequences of exploitation, the composition of a working class structured by other modalities of difference, class struggle, power, and a brilliant delineation of what exactly needs to change in order to radically remake the world. Insightful, inspiring, indispensable.

Readers of Michael Yates’s classic Why Unions Mattermight expect a down-to-earth discussion of the working class that most of us are part of – and this book doesn’t disappoint. Revolutionary theory is used in a way that doesn’t obscure our world’s complex realities, but instead helps us make sense of them. Can the Working Class Change the World?matter-of-factly blends economics, sociology, and political science with an inspiring call to action. Those who want to understand our world and help change it for the better should read this book – and share it with friends.

Michael Yates’s passion and respect for the class he came out of delivers a book that is especially accessible without retreating from the complexities and internal contradictions of working class life and organisation – a book committed not only to defending workers, but also to building on their potentials to transform society.

Working class study circles, it is hoped, will include the book in their study programme as the book focuses on issues essential to the working class.