Home » Arts & Books » In Praise of Blood: Crimes of the Rwandan Patriotic Front

In Praise of Blood: Crimes of the Rwandan Patriotic Front 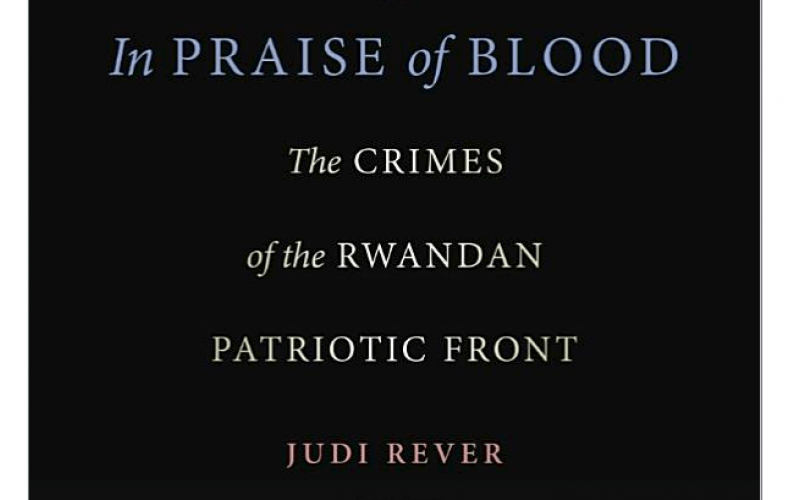 In Praise of Blood

Ann Garrison shares her opinion on Judi Rever’s recent book, In-Praise of Blood: Crimes of the Rwandan Patriotic Front, a book that has given an audacious account of what happened during the 1994 Rwandan Genocide.

If you have ever imagined being a daring foreign correspondent flying into parts unknown, you may at first find vicarious adventure in Judi Rever’s book In-Praise of Blood: Crimes of the Rwandan Patriotic Front. Her story begins in 1997, one week after Zaire’s long-time dictator Mobutu Sese Seko was toppled by a coalition of Rwandan, Ugandan, and Congolese forces. She writes, “I headed for the region, now renamed the Democratic Republic of Congo, to cover the humanitarian crisis. At the time, I was a reporter for Agence France Presse (AFP), born and raised in Québec but living with my new husband in Paris.”

The humanitarian crisis was hundreds of thousands of Rwandan refugees, mostly Hutus, who had crossed the Rwandan-Congolese border, then scattered into Congo’s dense equatorial jungle, fleeing attacks by Rwandan President Paul Kagame’s Tutsi-led army. The epic scale of the refugee crisis was captured in the Frontline documentary “Rwanda 1994.”

The refugees were nearly all civilians who had fled Rwanda at the end of its 1990-1994 war and genocide, which ended in then General Kagame’s seizure of power. Kagame claimed to be pursuing the survivors in Congo because they were genocide criminals, but the vast majority were innocent Hutu civilians including women, children, and the elderly.

Rever joined groups of Congolese volunteers with the United Nations, Médecins Sans Frontières, and the Red Cross who “were there, day in and day out, to provide the means of life to people on the edge of death.” Crossing a dilapidated bridge over a river deeper into the jungle was the first of many times she risked her life before this story ended.

In the jungle she and her search-and-rescue companions met a man in a UN sash with a walkie-talkie and a megaphone. He had been searching for Rwandan refugees calling, “Rwandan refugee, Rwandan refugee. It’s the Red Cross and the United Nations. We have food and medicine for you. Please come out of the forest. No one will hurt you.”

That was one of the book’s more chilling moments for me because by the time I read it, I had already read many books and UN reports that included accounts of how Kagame’s army had taken control of villages, then called all the villagers into the village centre to, they said, distribute food, and instead murdered them en masse. I imagined these desperate refugees trembling at the promises reaching them through a megaphone, wondering whether those speaking were really relief workers or more of Kagame’s soldiers hoping to lure them out and then slaughter them.

Rever reported on the refugee crisis for Agence France Press, but made only oblique references to the leading role of Kagame’s soldiers in the alliance that had overthrown Mobutu and their attacks on both Rwandan refugees and native Congolese. She went on to report from West Africa, covering conflicts in Sierra Leone and Liberia, elections in Nigeria, and the Christmas Eve coup in Ivory Coast, then travelled to Jerusalem to reinforce AFP’s bureau there during the Second Intifada. She loved the work, but her constant traveling, while her husband remained in Paris, began to take its toll on their marriage. At the same time, she was haunted by her memories of the Democratic Republic of Congo and its eastern neighbour Rwanda, feeling there were mysteries there that she was compelled to uncover.

The rest of the book is the story of how she researched and wrote the it, and of her marriage, including the birth of her two daughters upon her return to Canada with her husband. For years she collected the detailed testimony of victims, perpetrators, and contextual witnesses to the crimes of the post-genocide Rwandan government. She had also been on the trail of the true story of the Rwandan Genocide, not believing the simple, Manichean story of demon Hutus murdering a million Tutsis in a long-planned 90-day bloodbath. Then, in October 2003, a whistle-blower working at the International Criminal Tribunal on Rwanda (ICTR) sent her an official, 30-page compendium of crimes against civilians committed by Kagame’s army during the genocide. ICTR investigators had collected 100 witness testimonies, 41 of which were statements signed by people who risked their lives by coming forward. Former ICTR Chief Prosecutor Carla Del Ponte had even prepared to indict Kagame himself for ordering and planning the assassination of the Rwandan and Burundian presidents by soldiers who shot their plane out of the sky over Rwanda’s capital, Kigali, thus triggering the genocide.

The evidence of all these crimes was suppressed because Kagame was the United States of America’s new man in Africa, and the Tutsi were the new managers and local beneficiaries of Congo’s vast resource wealth chosen by the US and its resource extraction corporations.

Rever’s conclusions are likely to shock anyone who has accepted the “Hotel Rwanda” version of what happened during the Rwandan Genocide:

“After the presidential plane went down, Hutu elites in rural areas—drawn from military, political and administrative structures—operated in a political vacuum at first. Some of them resisted the call to kill Tutsis, but many others urged Hutu militia and civilians to murder and rape. These crimes were committed publicly, in broad daylight, and with little or no sense of remorse or concern about repercussions.

“In areas seized by the RPF [Rwandan Patriotic Front] or already under its control, its soldiers and intelligence agents worked with similar ethnic zeal, but they were more discreet: they cordoned off areas and killed Hutus secretly, with great precision. They operated mobile death squads, massacring Hutus in their villages. They brought large groups of Hutus to areas where NGOs and the UN agencies were not permitted to go. Under the cover of night, they transported displaced Hutus by truck, killed them, and burned their bodies with gasoline and gas oil. These atrocities took place mainly near Gabiro, a military training barracks in Rwanda’s Akagera National Park. Portions of the park became outdoor crematoriums, and human ashes were spread in its lakes. It was mass murder leaving barely a trace.”

Rever recounts the grisly stories of Rwandan soldiers who, haunted by the memories of what they had seen or done under Kagame’s command, stepped forward to tell their stories. She travelled on three continents to collect witness testimony. Both European and Canadian secret service agents warned her that her life was endangered by Kagame’s assassins. In Brussels, as she was checking into a hotel, two Belgian agents appeared on either side of her and said they would be accompanying her for the remainder of her time in Belgium.

As Rever reports the escalating danger and stress, the initial glamour of her foreign correspondent stories fades. Nameless Kagame agents called her home phone in Québec with threats and made it clear that they knew the names of her daughters. Her husband beefed up the alarm system in their home, adding panic buttons on both floors, and they told their daughters never to answer the door. She became physically and emotionally unwell. Her jaw locked, one of her feet swelled without external injury, and she developed a limp. By New Year’s Day, 2014, she could barely move. That was the day after Kagame’s assassins strangled his former intelligence chief Patrick Karegeya in South Africa.

Rever’s husband rushed her to an emergency room, where a battery of blood tests and X-rays revealed that she had “some sort of inflammatory response.” A month later she learned that she had developed an auto-immune disease, that her body was attacking its own cells.

She began the road to partial recovery, although she still suffers from an autoimmune disease. Finally, the stress that her whole family had been through ended in divorce and an agreement to joint custody of their daughters.

In March 2018, “In Praise of Blood: Crimes of the Rwandan Patriotic Front” was finally published in English by Penguin-Random House. Its title was drawn from this passage in Chapter 10:

“What were these Western allies supporting? From the point of view of the RPF’s victims, it all seemed to be in praise of blood, an endorsement of mass murder.

“Among Kagame’s greatest supporters in the West is Bill Clinton, who was the US president when the genocide began. Clinton has hailed Kagame as ‘one of the greatest leaders of our time.’ The Clinton Foundation has awarded Kagame its Global Citizen prize, saying ‘from crisis, President Kagame has forged a strong, unified, and growing nation with the potential to become a model for the rest of Africa and the world.’”

Is she safer now? More so, she says, but she remains “careful and vigilant.” Now that her book is published, murdering her in Canada would be an even more glaring indictment of Kagame than his many assassinations of Rwandans abroad. She has not returned to Rwanda, the Democratic Republic of Congo, or anywhere else in Africa.

Protestors sometimes appear at her speaking engagements to accuse her of denying “the genocide against the Tutsi,” even though she never has. She has been interviewed by Canadian, African, and European outlets, including the Canadian Broadcasting Corporation, Radio France Internationale, Ikondera Libre, and her former employer Agence France Presse. “In Praise of Blood” won the Mavis Gallant Award for the best non-fiction book of 2018 and the Huguenot Society of Canada Award, and it was shortlisted for the Hilary Weston Prize.

However, her story is such a radical rewrite of what most of the world has been led to believe that it continues to meet stiff and fearful resistance. It upends the story now embedded in US foreign policy, which tells us that the US must “intervene” all over the world—in Sudan, Libya, Syria, Venezuela, and perhaps Myanmar soon—to prevent another genocide like Rwanda’s.

Rever recently initiated legal action against the French publisher Editions Fayard, which had signed a contract to publish her book but suddenly cancelled.

I asked Judi Rever whether “In Praise of Blood” was worth all she went through to write it. She said yes, because she hated all the lies she had read about Rwanda and Congo, and because Rwandan and Congolese lives matter. The book is sure to become a classic history of one of the worst, most misunderstood, and most geopolitically sensitive tragedies of the 20th century.

*Ann Garrison is an independent journalist based in the San Francisco Bay Area, United States of America. In 2014, she received the Victoire Ingabire Umuhoza Democracy and Peace Prize for her reporting on conflict in the African Great Lakes region. She can be reached at @AnnGarrison or [email protected].

Tags:
In Praise of Blood