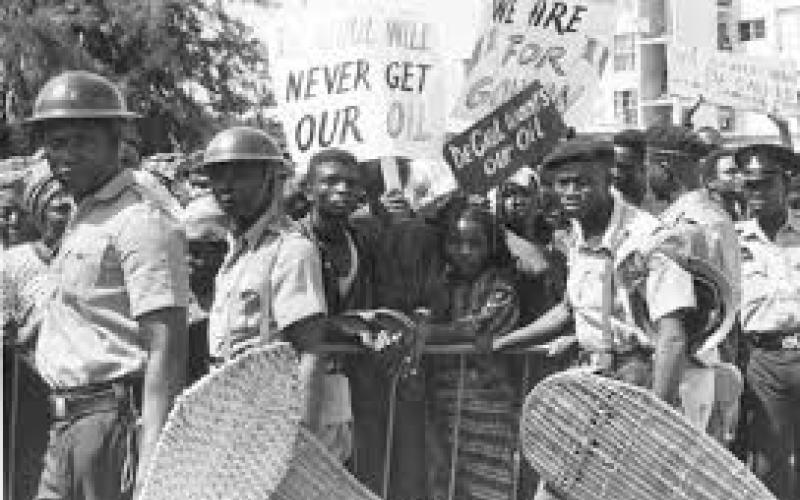 What sort of intellectuals would write a book about a genocidal war in which more than three million lives of their own brothers and sisters were wasted without even acknowledging in the index that the word ‘genocidal’ was used in the text by some authors to objectively describe the atrocities?

Writing The Nigeria-Biafra War, edited by Toyin Falola and his doctoral student at the University of Texas, Austin, Ogechukwu Ezekwem (2016, Woodbridge, James Currey), is a highly anticipated volume about a country in which authoritarian dictators banned the teaching of history apparently out of fear that such an academic discipline would sooner or later excavate the atrocities that they engineered in a genocidal war for opportunistic selfish gains in the guise of national interest. The book is timely now as the masses agitate for the actualization of Biafra, although the book is silent on this raging mass agitation and ongoing extra judicial killings and detentions of nonviolent protesters sometimes for waving the banned flag of Biafra which could have been permitted as a tourist attraction and as homage to the dead.

The chunky book carries the trademark James Currey polished finish with glossy hardcover. However, the choice of an abstract painting, ‘Niger Delta Militancy II’, by ‘dele jegede’, for the cover illustration is questionably ahistorical and trivialistic given the theme of Biafra that is better illustrated with genocidal images of kwashiorkor babies or with the bullet-ridden paintings or sculptures (‘Seeds’) of memories from the war by the scholar-activist artist, Olu Oguibe, for instance. I strongly recommend that the publishers should replace the cover illustration with more appropriate powerful paintings about Biafra by Obiora Udechukwu or Uche Okeke.

I could not wait to delve into the 491-page tome as soon as my review copy arrived from the publishers. I was impressed to see the high caliber and timber of intellectuals assembled in the book with essays from the eminent historian, Godwin Uzoigwe, and the Marxist literary theorist, Biodun Jeyifo, promising mouth-watering mussels of knowledge waiting to be carefully digested. The book also ambitiously included chapters on fictional narratives (analyzing fiction written by women such as Buchi Emecheta, Flora Nwapa, and Chimamanda Ngozi Adichie) alongside chapters on ‘objective history’ to attempt a more ‘comprehensive’ coverage of the grammatology of the war.

Sadly, the intellectual cowardice that forced many into silence in the face of tyranny as condemned by Wole Soyinka in his detention memoir, The Man Died, was too evident in the book about a country where scholarship on the war was apparently censored and official archives were sanitized to erase much of the evidence while the prolific documentation of the war in novels, memoirs and biographies by the Igbo survivors (such as Victor and Arthur Nwankwo with their legendary Fourth Dimension Publishing Company) were completely ignored in this book. These were suspected by some authors in the book of being ‘biased’ even when backed by newspaper reports that some dismissed as ‘propaganda’ by Biafran and foreign journalists who witnessed the war.

I have always wanted to read accounts of the Nigeria-Biafra war from the perspectives of Nigerian intellectuals on the side of Nigeria during the genocidal war but this book will not quench that thirst. There is no contributor from the Northern part of Nigeria where the genocide against the Igbo started and claimed an estimated 100,000 lives, leading to the secession, and then followed by the genocidal war in which another three million people were killed mainly through what Obafemi Awolowo unapologetically tried to justify with the assertion that ‘starvation is a legitimate weapon of war’. Anthony Enahoro also bragged that Nigeria had only two choices; either to starve the Igbo into surrendering or to kill them in the battlefield, as narrated by Achebe in There Was a Country and by Ekwe-Ekwe in Biafra Revisited.

For some reason, the word genocide was not even mentioned in the index of the book perhaps because the editors were searching for ‘objective’ archeology of the sort that Soyinka mocked in Season of Anomy: Poke-poke, a dry bone here, poke-poke, another ancient fossil there; meanwhile rivers of fresh blood were flowing across the country while the so-called intellectuals indulged in the ‘rabid’ historian’s ‘professional disease of tidiness’, according to Uzoigwe (p.17). What sort of intellectuals would write a book about a genocidal war in which more than three million lives of their own brothers and sisters were wasted without even acknowledging in the index that the word ‘genocidal’ was used in the text by some authors to objectively describe the atrocities?

The chapters in the book can be grouped into three categories – 1). The chapters by Igbo intellectuals (Uzoigwe, for instance) painstakingly identify the avoidable causes of the war and the regrettable genocidal consequences (p. 34). Akachi Odoemena also details the genocidist boasts of Nigerian officials (pp186-192). Furthermore, Francoise Ugochukwu in chapter 17 defends the objectivity of the gendered historical fiction of Buchi Emecheta’s Destination Biafra, condemning the ‘pogrom’. Ogechi Anyanwu reviews the sociological, economic and psychological conditions that led to the war against those that Ojukwu called ‘the foremost champions of unity in Nigeria’ before they were forced to secede due to state-sponsored genocidal killings in the North (p.49).

Raphael Njoku and Austine Okwu both focus their chapters on the Ahiara Declaration of June 1969 and suggest that it was too little too late and that it may have discouraged western superpowers from intervening to save Biafra, despite the support of the Soviet Union for Nigeria, because of the ideological borrowing of ‘African socialism’ from the Arusha Declaration of Julius Nyerere one year earlier. Christian Opata compares the memoirs of Alex Madiebo, a commanding general in the Biafra Army, with that of Robert Collis, an Irish medical doctor in Lagos who left the country after the war started and who saw Nigeria as an ‘artificial’ creation that the Igbo were planning to dominate. Opata dismissed the allegation of Igbo domination plans and concluded that all writings, including history, are reflective of vested interests. Though all writers may lay claim to degrees of objectivity, Madiebo is obviously more objective than Collis.

Egodi Uchendu finds that Nigerian authors reflected the impact of the genocidal war on women more than foreign ones. She quotes N.U. Akpan as reporting that Igbo women demanded revenge for the killings in the North. However, the remarkable thing is that the Igbo were not seeking revenge for the genocide; they were seeking justice.

2) The chapters by Yoruba intellectuals display intellectual dishonesty in vain attempts to mitigate the course of the war. Bukola Oyeniyi, for example, parroting rational choice or game theory, represents the state-sponsored genocide against the Igbo in the North before the war as ‘the spate of violence that erupted between Hausa and Igbos in Northern Nigeria following the first military coup of 1966’ (p. 111). He goes on to childishly accuse Azikiwe of ‘sowing the seed of disunity in Nigeria’ just because Zik chose to selflessly form a government as a junior partner with the Northern Peoples Congress rather than with Awolowo’s Action Group which allegedly offered him the office of prime minister (p.120). Also, Olukunle Ojeleye dismisses ‘local authors’ as lacking in objectivity or historical ‘positivism’ supposedly due to their ‘commitment to ethnic sentiments’. Adetayo Alabi reviews The Trial of Christopher Okigbo by Ali Mazrui and superficially concludes that it was an example of magical realism or science fiction. Unlike the dramatic chastisement of Mazrui by Ekwe-Ekwe at a Harvard University symposium on his irresponsible condemnation of a fellow intellectual for his scholar-activism, Alabi fails to offer a word of dissent against the ideological condemnation of the heroism of Okigbo, in giving his life to stop a genocidal war, as a crime against poetry, according to Mazrui. Amazingly even the otherwise Marxist Jeyifo condescends to use his verbose, self-opinionated, five-part serialized, newspaper book review of There Was A Country to describe that damning witness against genocide by Achebe as the work of a ‘propagandist, media apparatchik, and ideological zealot’, (p.246).

3) The chapters by non-Nigerian intellectuals appear more sympathetic to the plight of the Igbo who managed to survive genocide in Biafra. Fiona Bateman’s chapter, for instance, highlights the solidarity of Irish fiction writers who shared with the Igbo the oppressive experience of being colonized and exposed to artificial famine. Hugh Hodges focuses on the fictionalized childhood of Chris Abani in post-Biafra Graceland characterized by lawlessness reminiscent of Spaghetti Western films that children enjoyed watching in Nigeria without realizing that they were based on the subtext of the genocide against American Indian Natives.

Meredith Coffey looks at the representation of ethnic minorities in Biafra in the works of Chukwuemeka Ike and Chimamanda Adichie in a way similar to the chapter by Cyril Obi on the neglected ‘blind spot’ of minorities in the history of the war, showing that they were seen as being more likely to support Nigeria. Jane Bryce and Ofure Aito focus on the historical narratives of the ‘pogrom’ from the perspective of the survivors in Buchi Emecheta’s Destination Biafra. These chapters were more compassionate than those from most fellow Nigerian authors, especially those from Western Nigeria.

The shortcoming of this promising book lies in the futile search for ‘objectivity’ when it has been established that ‘committed objectivity’ is the best that scholars can approximate either in their cowardly support of tyranny or in their heroic challenge to genocide wherever it may rear its ugly head. There is no such thing as a point-of-viewless history of genocide (see my book Counter-Colonial Criminology). Nigerian intellectuals need to live up to the expectations of history by challenging the government of Nigeria to reintroduce the teaching of history in schools and also by supporting the teaching of the history of the Nigeria-Biafra war lest we repeat our tragedies. A book like this should include scholar-activism against injustice by calling for reparations to be paid by Nigeria and by the foreign allies for the genocide against Ndi-Igbo so that we can finally say, never again.

African intellectuals should renounce their shameless denial of the Igbo genocide and join courageous intellectuals like Soyinka in denouncing the evil that has been done to fellow Africans by greedy rulers of the neocolonial genocidal state, otherwise the culture of genocidal violence would continue to haunt the continent. We need to hear the perspectives of historians from the Northern part of Nigeria on the unjustifiable atrocities visited on their Eastern brothers and sisters before, during and continuing after the Nigeria-Biafra war. What sort of intellectuals are you if you choose to keep silent in the face of tyranny? This is the question posed by Soyinka to progressive African intellectuals, a question made more scandalous because the so-called pseudo intellectuals were not just silent, they were the cheerleaders of genocide while hiding behind the mask of ‘objectivity’ to deny the crimes against humanity. Africans should outlaw genocide denialism as hate speech.