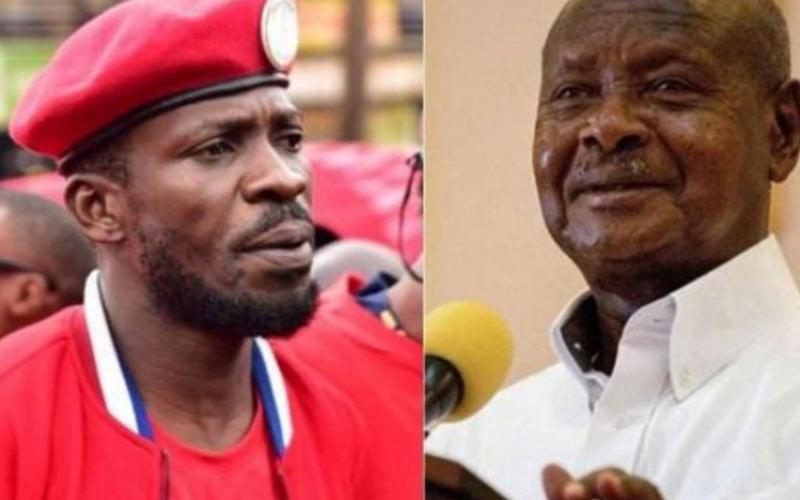 Not sure what to make of the unfolding political drama in Uganda.  It all started by a simple by-election for Arua Municipality where for some unknown reason all the political heavy weights of the country converged for a show down.  By-elections in Uganda have become matters of life and death. This time around, the elections was indeed a matter of life and death—the drive or Bobi Wine [whose really name is Robert Kyagulanyi Ssentamu] was shot dead, President Museveni’s car was stoned and windscreen shattered, several people were injured including some Members of Parliament (MPs).

Then the seemingly most popular Ugandan politician to date Bobi Wine got a severe beating and was then arrested.  Is the case of Bobi Wine, a youthful talented musician turned politician, taking on President Museveni something to be worried about? Is this the case of David vs. Goliath, or even “new wine in Uganda’s political wineskin? And should President Museveni be worried for his political future? These three questions and the unfolding drama around Bobi Wine will help frame some thoughts about the current political situation in Uganda.

Bobi Wine: Politics of music and music of politics

Two movements here. On the one hand, Bobi Wine is daring Museveni’s political power using the tool he wields and knows how to deploy best—politics of music.  On the other hand, Bobi Wine is confronted by the state brutality thus dancing to the violent tunes of music of politics of repression that has marked Uganda’s political history since independence.  This is a battle of titans since it has attracted a lot of media attention both at home and abroad.  No politician in Uganda’s political history has caused such a political storm during President Museveni’s rule of 33 years as Bob Wine has done.

Music has a lot to do with this hugely popular political drama whose trajectory we can only guess.  Music appeals to multitudes especially the youth.  Bobi Wine, carefully deployed his musically talent to rally political support, first for himself, then for other politicians of his choice. Wherever he goes to campaign, the masses are electrified and the one he supports wins. This kind of political magnetism has not gone down well with the powers that be.  To mobilise human emotions one requires a lot of energy, but if you happen to be a musician, it comes quite easily.

Once emotions are mobilised, then one can turn them to political use.  This musical political theory is strange and new for President Museveni who used another strategy—guerrilla warfare in Luwero Triangle in the early 1980s.  It is not surprising that Bobi Wine has huge following among the youth who have no idea what the Luwero Triangle war was all about.  It is a new generation that is seduced by Twitter (once in a while Museveni also uses this), Facebook, Instagram, WhatsApp, etc.

This clearly shows why when Bobi Wine deploys his musical guerrilla tactics, the military and police descend on him with brute force and guns.  The public and the international community quickly put their sympathies on the poor victim of brute force.  Even in Kenya some youthful MPs went on the streets to protest what they consider, as excessive and unjustified force against a simple musician who is promising some hope to the marginalised youth of Uganda. The politics of music has gone regional and global, and it seems hard to stop it.

Deep down, I am sure; Bobi Wine was somehow surprised as to how his political music turned out.  He has in a short time become a global political icon and a face of the youthful political movement that is now posing an existential threat to Museveni’s 33 years old reign.  All of a sudden all opposition forces see in Bobi Wine, the hope for the resolution of their long political frustration and long political battles.  Even Kizza Besigye, who has been at the receiving end of Museveni’s regime’s brutal force, has joined the political music of Bobi Wine. He has, however, cautioned the young comrade in the struggle of the tough times ahead.

Doctor Besigye has seen it all: treason and rape charges; arrests and severe beatings; tear gas; exile and return, etc.  Bobi Wine’s arrival on Uganda’s political scene has brought some freshness and new momentum, but this has been met with equal brute force—the law states that “for every action, there is an equal and opposite reaction.”   Indeed, Bobi Wine has attracted an equal and opposite force.

Is Bobi Wine then the new wine in Uganda’s political wineskin? It is too early to tell. What we are seeing are some seeds of political mutations and transmutations.  The Arua saga was akin to an inauguration of the new form of political activism to challenge Museveni domination of Uganda’s political landscape.  This came with youthful and vigorous energy and symbolically represented by the defeat of the national Resistance Movement (NRM) in a by-election that was taken by an independent Kasiano Wadri, who was formerly a member of Dr. Besiggye’s Forum for Democratic Change.

The little known small town of Arua has all of a sudden become a global phenomenon thanks to the confrontation between President Museveni and Bobi Wine.  When Bobi Wine was arrested along with other MPs, the theatre of political drama shifted to Kampala, the capital of Uganda, with street running battles between supporter of Bobi Wine and security forces.  As if this brought the two major protagonists contesting Museveni’s long stay in power, Bobi Wine and Dr. Kizza Besigye were both arrested.  The new and the old wine have been mixed to produce a potent brew that has left Ugandans politically intoxicated.  The hangover might take a while to go away.

Bobi wine being escorted by Security forces to a courtroom.

But where is the yeast for the new wine coming from? We are still guessing.  State functionaries are suspecting some foreign influence since the calls for “release Bobi Wine” increasingly grew louder even from the international community.  Even though this might just be the normal routine for human rights activities and international obligations when human rights boundaries have been crossed, President Museveni’s handlers will suspect some invisible upper hand.  One clear source of the yeast that is brewing the potent Bobi Wine are the disgruntled and unemployed youth of Uganda.  The fruits of the NRM “prosperity for all” programmes have not reached the many hungry youth.  In Bobi Wine they see a sort of Messiah—a self-made youth who not only entertains the youth with music, but also with a message of a better tomorrow.

The other source of the Bobi Wine yeast are all the opposition forces that have been battling Museveni’s overstay in power.  And they are many.  Some of his old comrades have also been disillusioned at how he has been shifting goalposts and extending his stay in power under the guise of having not yet accomplished his mission of the “Mustard Seed.”  Recently, even his close security and military/police most trusted General Kalekezi Kayihura, has fallen from grace and is under trial for a host of charges.

Bobi Wine vs. Museveni: Who will win this one?

We are all guessing at this stage.  President Museveni is a seasoned fighter and has fought bigger battles before.  Bobi Wine came with a new weapon—music—that follows a different logic that Museveni is not used to.  Even some of the most hardliner supporters of Museveni like Major General Kahinda Otafiire (now Minister of Constitutional Affairs) and the Chief Justice Bart Magunda Katureebe, have expressed their anger at the way the security forces are using violence on unarmed civilians.  They have both said that it is not right to take victims of state-violence to courts when they are still frail and fragile.  Is this some sort of moral outrage and voice of reason beginning to sink in?

The elephant in the room is the million-dollar question: does President Museveni have an exit strategy at this point? Can his NRM withstand the mounting pressure against Uganda’s longest reigning regime since independence?  Lots of analyses of likely scenarios are still on-going.  The ball seems to be in President Museveni’s court to do the right thing and save his legacy before it is too late.  As some observers have hinted, the Museveni of today will not recognize the Museveni who took power in 1986.  A regular EastAfrican columnist Generali Ulimwengu put it that “if the two Musevenis were to meet each other, they would shoot each other!”  These are words from someone who has watched closely Museveni’s rise and likely demise.

As for Bobi Wine (whether he is new wine or a mix of new and old wine), he has become a political icon no matter what the security forces will do to him.  Police and military brutality against a rising political star only magnifies the stature of such a person.  The unequal power relations between Yoweri Museveni and Bobi Wine makes the latter a victim of political persecution not matter what he may have done against the law.  The popular saying that a pen is mightier than the sword is also true with music: Music is mightier than the sword.  The battalion of youth in Uganda, who are more concentrated in the region where Bobi Wine comes from, are hard to contain once their emotions are excited.

President Museveni’s Vehicle that was stoned in Arua. Credit: The Observer.

For those who have a Marxist inclination, it is important to pose a question as to whether Museveni betrayed the very revolution that he launched way back in the 1970s? He waged a protracted guerrilla war supposedly to remove dictatorial regimes that were brutalising civilians.  Are we then back to where we started? Only Museveni can answer this question and draw the right conclusion.  The popular answer to this question has been offered by the youthful musician Bobi Wine through the medium of song.  Are all listening?

* Doctor Odomaro Mubangizi teaches social and political philosophy at the Institute of Philosophy and Theology in Addis Ababa, where he also is Dean of the Department of Philosophy. Doctor Mubangizi edits the Justice, Peace and Environment Bulletin.