Will the Brazil-Russia-India-China-South Africa (BRICS) bloc ever really challenge the world financial order? The BRICS New Development Bank (NDB) leadership is meeting in New Delhi from 31 March to 2 April with a degree of fanfare unmatched by accomplishments. It is a good moment to assess progress since the BRICS Summit in 2013 when rumour had it that the then host city of Durban would also be the NDB’s home base. (It ended up in Shanghai, launched in 2015.)

BRICS leaders often state their vision of establishing alternatives to the World Bank and International Monetary Fund. Indeed the NDB leadership began with environmentally-oriented loans last year, and in 2017 wants to add $3 billion in new credits.

But looked at from South Africa, questions immediately arise about key personnel, as well as the willingness of the only local NDB borrower so far – the electricity parastatal Eskom – to support renewable energy, and perhaps most importantly whether the country and the continent can afford more expensive hard-currency loans.

Why green loans? The original NDB designers were two former World Bank chief economists, Joe Stiglitz and Nick Stern. Although their public endorsements of the NDB stressed sustainable development and climate change, in private Stern offered a different rationale during a 2013 conference of the elite British Academy (which he chairs): “If you have a development bank that is part of a [major business] deal then it makes it more difficult for governments to be unreliable.”

Stern asked, “are there any press here, by the way? OK, so this bit’s off the record. We started to move the idea of a BRICS-led development bank for those two reasons. Coupled with the idea that the rich countries would not let the balance sheets of the World Bank and some of the regional development banks expand very much, and they would not allow their share in those banks to be diluted.”

Four BRIC countries stood on African and Latin American heads to get better executive director seats at the IMF table. When they got there, the BRICS directors approved the reappointment of Christine Lagarde in 2016 and after she was convicted on a $430 million corruption charge last December, the IMF directors unanimously endorsed her continued employment.

The NDB’s first loans did boost environmentally-oriented projects, as $300 million went to Brazil, $81 million to China, $250 million to India and $180 million to SA, the latter to connect renewable Independent Power Producer generators to the main grid. But these processes are accomplished with mostly local-currency inputs, hence the US$ loans were inappropriate. Like the other multilaterals, NDB repayments are in US dollars, which adversely affect the borrower’s balance of payments, although the NDB has started fund-raising from yuan and rupee markets so this may eventually change.

But worse, Eskom’s two most recent leaders, Brian Molefe and Matshela Koko, simultaneously announced that they wanted nothing more to do with renewable energy. A massive battle over renewables was only resolved a month ago when Finance Minister Pravin Gordhan’s Budget Statement recommitted to the IPP contracts. (Koko may well have to step down after last week’s conflict-of-interest revelations involving a scandalous $100 million tender suspiciously won by his stepdaughter’s company.)

In that budget, Gordhan refused Eskom further nuclear energy financing, beyond an initial $15 million: a tiny downpayment on the in-principle reactor purchase agreement that President Jacob Zuma had made to Moscow-based Rosatom, with anticipated costs of $50-100 billion. The principle supplier of raw inputs to the nukes – if they are built – will be Oakbay, a uranium (and coal) company owned by the notorious Gupta brothers.

This week the Guptas are in court fighting Gordhan over his failure to reverse the main SA commercial banks’ boycott of Oakbay and other Gupta-owned firms. This boycott is the widely understood reason that Gordhan was recalled from a UK-US investment trip on Tuesday morning: to be fired.

For the NDB, such turmoil is extremely important because SA’s Governor to the NDB is Gordhan. And the oft-rumoured ascension to the Treasury by Molefe is vital in part because he was SA’s BRICS Business Council leader until recently – following his own humiliating resignation as Eskom chief executive last November. That was the result of the Public Protector’s “State of Capture” report revealing influence over Molefe by the Guptas.

After he (incorrectly) claimed that the Gupta’s luxurious Saxonwold neighbourhood contained a shebeen (pub) that might explain his regular presence there, Molefe’s credibility was utterly destroyed. Nevertheless, in January, Molefe was appointed to parliament amidst fresh controversies over Gupta meddling.

Just before the Eskom resignation, Molefe made an articulate appeal for a replacement of “the current ‘casino’ financial system or ‘law of the jungle’ with a project that expressly promotes the common good among nations, provides credit for high-technology development projects, on youth education and training and meets the growth challenges of the future.”

Molefe bragged that “BRICS and its allies are taking bold corrective measures by building a world system based on real value and to create a system capable of fundamentally shaping socio-economic growth and development. There have been some significant steps taken, in particular the launch of the NDB, which has already started funding key projects.”

Yet these are the very ‘key projects’ – renewable energy – that Molefe was sabotaging at that time, suggesting his NDB pronouncements simply cannot be taken seriously.

The NDB website itself observes “a need for Multilateral Development Banks to reinvent themselves” on the one hand, but on the other, its president KV Kamath last September signed a deal with the World Bank for “co-financing of projects; facilitating knowledge exchange… and facilitating secondments and staff exchanges.”

In contrast to Molefe, two other executives from SA receive regular praise. Ironically, SA’s NDB Director is former Reserve Bank Governor (1999-2009) Tito Mboweni, who had slammed the NDB as “very costly” in 2013. Upon accepting the NDB directorship two years later (as the only one of the five not employed by a BRICS state), he promptly declared that nuclear energy financing “falls squarely within the mandate of the NDB.”

Mboweni is International Advisor to Goldman Sachs. That should have been an embarrassment in January 2016 when, according to financial journalists, the bank “identified shorting the rand as one of its top trades for this year due to falling commodity prices and SA’s current account deficit.” At that point the SA currency was rapidly pushed down to its historic low of R18/$. (It since recovered to R12/$ after the speculative wave ebbed, but recent Treasury turmoil just drove it below R13/$.)

One other NDB job remains open: the much-advertised head of the NDB Africa Regional Centre in Johannesburg. In December 2015, Zuma announced that his 2014-15 finance minister, Nhlanhla Nene, would urgently take that job. It appeared to be a fig-leaf appointment, so as to replace the fiscally-conservative Nene with a man – Desmond van Rooyen – considered close to the Guptas.

This caused such an uproar that not only did three top white bankers communicate to Zuma that he must reverse course, but also a “critical intervention” (according to the country’s leading business writer, Peter Bruce) was made by Beijing’s owners of the Johannesburg-based Standard Bank, leading to van Rooyen’s firing within four days, and Gordhan’s appointment.

Zuma, acting as clumsily as usual, never had a guarantee of Nene’s job from the NDB officials, who subsequently stalled the Africa Regional Centre’s launch. It was originally scheduled for March 2016. Then last September, the BRICS Business Council website declared that the new Centre’s Johannesburg headquarters would be ready by November. (The Africa Regional Centre is still to be launched, now more than a year late.)

The location was ‘well received’ in the rest of Africa, according to the Business Council, because the NDB will lend to other countries, not just the BRICS. Leading Ugandan official Louis Kasekende argued that Africa should “have access to credit as quickly as possible at low rates,” especially to “reduce the timeframe of projects finalisation and approval process.”

Reducing the timeframe would logically mean reducing attention to environmental and social dimensions (the critique of development banks most often made by civil society). But the larger problem is the exceptionally high debt burden African countries now shoulder, following the world crash of commodity prices from 2011-15. The NDB would offer Africa only hard-currency loans that are extremely expensive when currencies crash.

As the Financial Times recently reported, “One factor Africa’s indebted countries have in common is sharp devaluations of their currencies against the US dollar. Since mid-2014, the Mozambique metical is down 56 per cent against the dollar, the Angolan kwanza 41 per cent and the Ghanaian cedi 36 per cent, for example.” In 2011, 6.3 South African rand bought a US dollar; today it costs twice as much.

After multilateral lenders’ and G7 debt relief in 2006, the foreign debt of SubSaharan Africa was cut by $100 billion, to $200 billion. But thanks mainly to Chinese state loans (associated with the extractive industries), it is now up again above $400 billion, with countries like Angola, Chad and Ghana paying more than 30% of their governments’ revenues on debt servicing.

South Africa’s own payment obligations to the BRICS NDB will become onerous as well. To capitalise the NDB, $680 million was allocated by Nene in 2015-16, rising steadily to $3.2 billion this year and $6.2 billion by 2020. The NDB’s capital base, which is notionally $100 billion, is shared equally by all five (unlike the $100 billion Contingent Reserve Arrangement which treats South Africa the way the IMF does, with a much smaller share of the quota: $10 billion). Other multilateral financiers cost South Africa $19.2 billion in ‘provisions’ made in the current budget (i.e. to be paid when called for by the financier); indeed only the IMF capital subscription will be more costly ($6.4 billion this year, rising to $7.2 billion in 2020) than the NDB.

Paying these substantial subscriptions is onerous, given that they contribute to enforcing the neo-liberal ideology that continues oppressing the continent’s people. But moreover, South Africa also faces a terrifying rise in its own foreign debt, which according to the March 2017 SA Reserve Bank Quarterly Bulletin had risen to $143 billion in September 2016, a $10.6 billion rise over the prior three months. At 50% of GDP, this is the highest debt burden in the country’s modern history; the only prior default was in 1985 when the ratio was 40%. 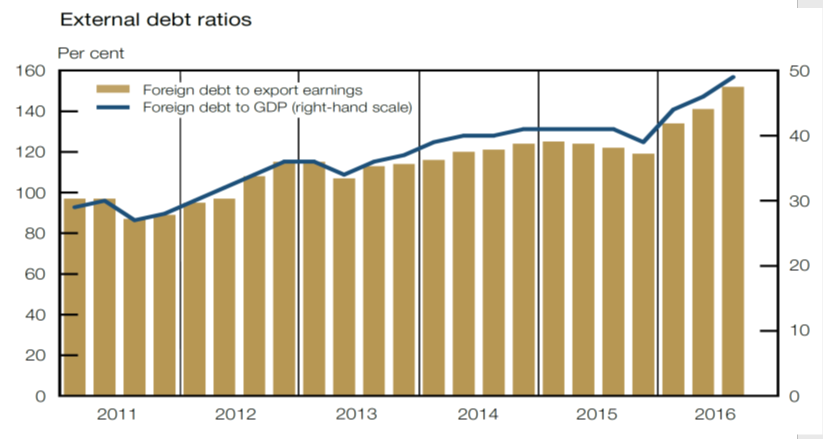 The reason for soaring foreign debt is that multinational corporations are taking SA-sourced profits and dividends to London and other offshore financial headquarters. Indeed, as Chinese lenders, Indian steelmakers, other BRICS mining houses and the Gupta family externalise their own funding flows, the tragic irony of the NDB emerges.

In sum, the unnecessary NDB loans to Eskom contribute to more BRIC country power over the one African country, South Africa, that once had the potential to stand up and fight for justice. But perhaps Molefe in the Gupta’s suburb of Saxonwold, that might just have been shebeen talk.

* Patrick Bond is professor of political economy at the Wits University School of Governance in Johannesburg and co-editor of BRICS: An anti-capitalist critique.