Home » Democracy & Governance » Ghana: Edging towards the abyss as it fails to learn the lessons of its past?

Ghana: Edging towards the abyss as it fails to learn the lessons of its past? 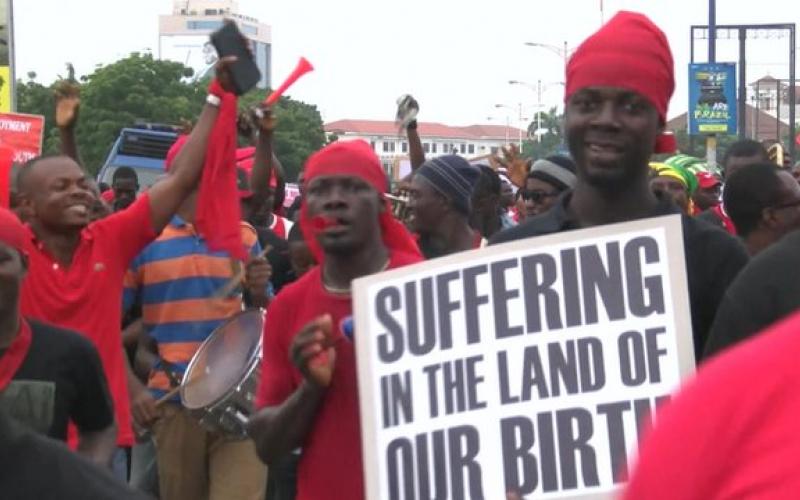 The author believes that the current challenges that Ghana is facing are largely due to the fact that the ruling elites have refused to learn from the past and continue making the same mistakes of opportunistic, short-sighted and divisive politics.

Recently, I watched in disbelief at the pictures of violent incidents at La Bawaleshie on the day of the Ayawaso West Wuogon (in Accra, Ghana) by-election. It was like shots from a conflict zone film in which law and order had broken down completely.

Following this, I also watched pictures of a demonstration supposedly organised to protest against the by-election violence, which ensued in La Bawaleshie.

I am not against demonstrations. It is a democratic way for citizens to express their opinions. I am not against them.  I spent my university days protesting against the General [Ignatius Kutu] Acheampong regime, some of my compatriots have scars to show for it. We called ourselves “Aluta Graduates”.

We did not belong to any political party. We were not beholden to any politician or foreign interests. We would have been horrified to find that someone had sold us to any politician, even though the dreaded “Military Intelligence” and “Special Branch” were always on the prowl looking for possible sell-outs and traitors of the student movement.

They found one or two but these were not the leaders of the movement. Kwasi Adu, then the strategic and respected leader was never bought. Other student leaders, I remember for instance, our respected President of the Students Representative Council in Legon, Accra at the time, the late Oduro Kwarteng. They were neither for hire nor for sale.

We resisted military rule, campaigned against General Acheampong’s “Union Government” idea, and against foreign domination of the Ghanaian economy. We built solidarity across West Africa with student and workers movements. It was all about patriotism and pan African solidarity.

Let me add that the student movement was also divided ideologically but we never threw stones or punches at one another. Those we descried “right wing” like Dua Adonteng, now a respected lawyer, and Sir John (Kwadwo Owusu Afriyie) were what they have always been.

In the same way, Kwasi Adu, now a retired but prolific writer, Nicholas Atampugre, then Coordinating Secretary of the feared but respected National Union of Ghana Students, and several others from the Kwame Nkrumah University of Science and Technology have remained consistent fighters for social justice.

When it was necessary, we built alliances with politicians like the late Johnny Hansen (Secretary for Interior of the Provisional National Defence Council of 1981), the late Safo Adu, a respected member of the right wing in Ghanaian politics, and several others. At some point, we met with the feared General Akwasi Afrifah. At one meeting he was visibly disappointed that the student magazine “ALUTA” had described him unflatteringly as a “right wing traitor”, but he still supported us with some funds to print some copies of “ALUTA”.

This shows that at some critical moments in Ghanaian history, ideological lines were blurred in the cause of the common good. Where necessary, we worked together. We condemned American and British imperialism, and for some people, Communist Union of Soviet Socialists Republics in equal measure.

We debated and argued amongst ourselves on national and global issues, but when necessary we marched together. We strategised together. Demonstrations were serious business and no cerebral antics, because when the Mounted (Horse) Police Division showed up, there could be no talk of human rights.

We saw the might of the Ghana Police Force (as it was then called) when they invaded Legon, to our surprise. Our Political Science lecturers had told us that university campuses were sacrosanct places of intellectual discourse, and therefore safe from police intrusion. We learned different. Even the British head of Balme Library (University of Ghana) was not spared as they clobbered us mercilessly.

Demonstrations these days don’t even pass the laughing test. Sponsored by political parties, individuals with partisan interests and representatives of “foreign development” partners, they do not last more than a few hours because the organisers are in a hurry to go for lunch.

In some cases, the ambassador or his representative from the United States Embassy calls the leaders of the protests to order, threaten some of them with visa bans and withdrawal of support, so they sneak back into the holes from which they emerged. The recent protests against United States military bases in Ghana suffered from this malaise, the anti-military base protests suffered stillbirths.

The good old Ghanaian bubble is bursting. To paraphrase one writer recalling the good old days when Ghana was known as the Black Star: “the belief in the inherent greatness of Ghana and its people has been replaced by ‘casual dishonesty’ of our leaders, intolerance, lack of political and ideological clarity and, complacency.”

Our football, one thing Ghana was known for is collapsing in the midst of corruption, self-aggrandisement and selfishness without patriotism. Our much-vaunted democracy is a sham manufactured by the middle class dominated by two large parties with the smaller ones being developed for sale to the highest bidder, our children lie on their stomachs in schools, and our daughters are being kidnapped. How much lower can we go?

In the meantime, the two main political parties are engaged in a game of political brinkmanship. I am yet to hear of any serious discussion on matters of national values, policy direction or any discussion with serious political underpinnings. Screams interspersed with insulting vituperations and anger is what we are treated to on television and FM stations.

And yet, this is a country with too many universities, serious minded academics, voluntary sector experts like Ibrahim Tanko, and world-renowned journalists like Professor Kwame Karikari and governance experts like Emmanuel Akwetey and his team, and think tanks like the Centre for Democratic Development and serious socialist left oriented political formations like the People’s Democratic Movement.

Yet, our political parties are run like colonial one party states. These political parties crave and demand loyalty and “slavish adulations” from those to whom they dole out crumbs. In the words of one British journalist, some have become “insufferably pompous” in their demands for loyalty to the extent that being independent minded in Ghana today could earn you accolades of disloyalty to the party or the leader.

To what ends are these post by-election protest demonstrations, policy discussions and seminars being fronted by some parties? Will the protests help deepen our democracy or are simply part of a gigantic effort to deceive the population at large and for electoral gain? Will they outlast the harmattan?

Certainly, the issues will remain with us. Protests organised by political parties with a short-term agenda cannot last.  They are for electoral purposes and will not outlive an electoral victory or defeat. In the same way, the eerie silence of progressive intellectual elite is not helpful.

The problem however, is more than that. The middle-class ruling elite is refusing to learn the lessons of history. It has taken the road to irredeemable disaster. In West Africa, we have examples from Liberia, Sierra Leone and Nigeria to teach us a few lessons.

Years ago (in the 1980s), when West Africa was gripped by coups, conflicts and the like, the respected Nigerian Nobel Prize Winner, Professor Wole Soyinka viewed the rest of West Africa, and concluded that what was happening in Ghana, Liberia, Sierra Leone and some “Francophone” countries then, could not happen in Nigeria.

He was wrong as Nigeria got a brutal dictator, General Sani Abacha. Now there is Boko Haram. He could not have missed the lessons for the rest of us.

This reminds us of the saying that “those who refuse to learn from history are bound to repeat it”, sometimes with disastrous consequences.

We are often reminded that the Fourth Republican Constitution offers us a safe, violence-free route to political transition. Yet, a section of the middle class, having tasted power they did not fight for, and did not help to bring about, are determined to regain it with methods that can only be described as being against the popular will of the people. The other winning side is cleverly gerrymandering electoral units to perpetuate its rule.

I support protest demonstrations, but these should have one aim: protecting the nation’s interests. These should also be guided by genuine patriotic demands aimed at preserving national unity, promoting development, enhancing our quest for democracy and defending the territorial integrity of this entity called Ghana.

The opposite can only lead to irredeemable and irreparable chaos and confusion. Sadly, these are what we are getting. When people can attack the police and seize weapons, when our children are being abducted, and individuals behave as if we have no national values, and some of our leaders conduct themselves as if wrong doing is the only way to power and wealth, then it is time to worry.

The people of Sierra Leone and Liberia, the people of Nigeria, of Niger, Mali and Burkina Faso are suffering from the failure of the ruling elites to negotiate and struggle to build unified states in which all the people have a stake. The reliance of the elites in these countries on foreign military support has accentuated the activities of armed non-state combatants. It is the failure of the ruling elites with partisan and entrenched interests. Are we about to make similar mistakes?

We should not as a people take our freedom, peace and stability for granted. Political violence (called vigilantism in Ghana), and lack of confidence in and respect for the security forces to protect the nation and all those who live in it can only lead us through the path of unnecessary mayhem with gruesome consequences.

Is there a way out? It is the duty of all progressive peace-loving Ghanaians to refrain from seeing partisanship in every issue in Ghana. There is need for like-minded Ghanaians to reject violence and sabre rattling in Ghana. Those predicting violence in 2020 are dangerous agent provocateurs who should be ignored.

The youth of Ghana need to sit up as people who will inherit the future, and therefore must reject rigid partisanship. Stories of “bloodbath” in 2020 are only spread by people who have acquired first class tickets and visas to foreign countries. The rest of us should take it as warning. They almost certainly would not be around to be consumed by the violent conflagration that they are talking about.

It is the poor, unemployed youth who will. We need to build a united nation for the people and for future generations. Let us reject violence of any sort, rejuvenate the patriotism we had in the days of the Convention People’s Party and the early years of the General Ignatius Kutu Acheampong regime.

That is only when the economy and national values can be revived, employment generated to absorb the youth, child mortality reduced, and only then can we build a “Ghana Beyond Aid”.  Political confusion can only enrich few people, and cannot create jobs.

Those who refuse to learn from the past are bound to repeat it.’

*Zaya Yeebo is former Provisional National Defence Council Secretary for Youth and Sports. He is an essayist, writer, political commentator and a member of the People’s Democratic Movement. With additional editing from Linus Atarah.