Home » Democracy & Governance » Lessons from the Ghanaian elections: No 1, don’t sign a deal with the IMF

Lessons from the Ghanaian elections: No 1, don’t sign a deal with the IMF

Opposition candidate Nana Addo Dankwa Akufo Addo has been sworn in as Ghana's new president. Beyond the current euphoria sweeping through much of the nation, the winning party is stuck with Ghana’s IMF programme at least for the next two years.  It remains to be seen how they will rise above the country’s worrying high debt ratio, currently around 70 per cent of GDP, to achieve their ambitious campaign promises.

Few could have predicted the dramatic fashion in which the party would rise to overwhelm the ruling National Democratic Party (NDC) and snatch Ghana’s 2016 presidential and parliamentary elections in such convincing fashion two weeks ago.

But the goose started cooking when the John Mahama administration signed a three-year bailout package worth $918 million with the International Monetary Fund (IMF) in mid-2015. Who submits to IMF conditionalities going into an election year?

Until Flt Lt Jerry Rawlings in 1983 became the African strongman who could make an IMF austerity programme stick, it was widely believed across Africa that anyone who brought the IMF home would invite a coup d’état.

Successive governments did sign IMF programmes. But after the Highly Indebted Poor Country (HIPC) status years of the John Kufuor administration when we declared to the world that we were in need of special assistance, through the short John Atta-Mills years when the lucky oil finds enabled us to proudly announce that Ghana was now a lower middle income country, we had thought that we had finally graduated from IMF tutelage.

Not that there is anything technically wrong with IMF programmes. After all, what can be wrong with financial discipline and good accounting? It is just that IMF programmes are designed to stabilise an economy and not to transform it.

And often stabilisation measures are an indicator that a government has lost the plot. A government that is in control of its economy does not need to turn to the IMF.  Thus keeping a good distance between your Finance Ministry and the IMF is a good indicator that all is blooming at home.

IMF programmes do not generally make governments popular because they require considerable belt tightening. Though they all claim to be “homegrown”, these ‘structural adjustment’ programmes always have the same macroeconomic stabilisation features.

And whereas transformation implies investment in production, stabilisation by contrast suggests taking an economy off the boil, more austerity, less spending and usually less innovation.

So then the question became if the NDC thought they could do austerity and win the elections, what on earth did they have up their sleeves?

For example, how were they going to find money for the 2016 electoral campaign and quash speculation that the GHc 51.2 million paid controversially to pro-NDC businessman Alfred Agbesi Woyome in judgement debt was meant to finance the campaign?

Otherwise why did the current Attorney General, despite a Supreme Court ruling that Woyome should refund the money to the state, withdraw its application to orally examine the businessman? Why did Rawlings call Woyome a “thief”? Why was he not campaigning for President Mahama?

These questions became more and more troubling as utility bills soared and food prices matched the rise in fuel prices, which continued to be regularly adjusted upwards even though, as many pointed out, oil prices were at historically low levels on world markets. Who raises the price of fuel seven weeks before an election?

Some people thought they had found what the ruling party had up its sleeve when former Attorney General and Woyome case whistle blower, Martin Amidu, cried that President Mahama was using his recently appointed Electoral Commissioner, Charlotte Osei, to rig the elections.

The first sign that the new EC boss was going to get tough had come soon after her appointment in mid-2015 (around the time the IMF deal was signed), when she announced that any party that did not have offices in two thirds of constituencies would be disqualified.

Charlotte Osei’s next move was to disqualify 13 presidential candidates, leaving only four candidates representing the two big parties, an independent and, curiously, the Convention People’s Party.

Not only disqualify them on the grounds that their filing forms were not properly filled out, but then report them to the police for fraud. The police even started probing how some small parties had raised the money to pay the inflated filing fees.

As the parties abandoned their campaign grounds to run in and out of the High Court, Progressive People’s Party flagbearer, Paa Kwesi Nduom, successfully won a Supreme Court ruling that led to some of the disqualified parties being reinstated.  Happily, the ballot papers could now carry seven presidential candidates.

In the midst of this confusion, Ghana’s elephant party — the elephant is the party symbol of the NPP — began trumpeting a series of manifesto pledges that caught the imagination of the populace. One District One Factory. One Village One Dam. One Constituency One Million Dollars. So dizzying were these promises that unschooled presidential aspirant, Akua Donkor, had her own euphoric moment when she pledged One Fisherman One Sea! 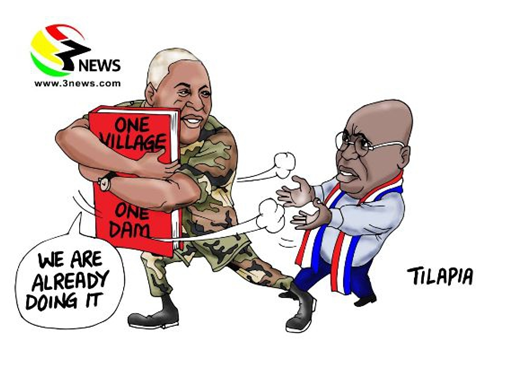 Beyond the current euphoria sweeping through much of the nation though, the NPP is stuck with the IMF programme, at least for the next two years.  It remains to be seen how they will rise above Ghana’s worrying high debt ratio, currently around 70 per cent of GDP, to achieve their ambitious campaign promises.

President Nana Addo Dankwa Akufo Addo has said that his plans do not depend for success on dwindling government reserves but assume private sector participation in the economy.

Whether the NPP can create a model for economic development, not seen before in Ghana’s history, in which the private sector buys into the manifesto plans of a ruling party and delivers broad-ranging economic and social development is a question that will dominate policy-making over the next four years.