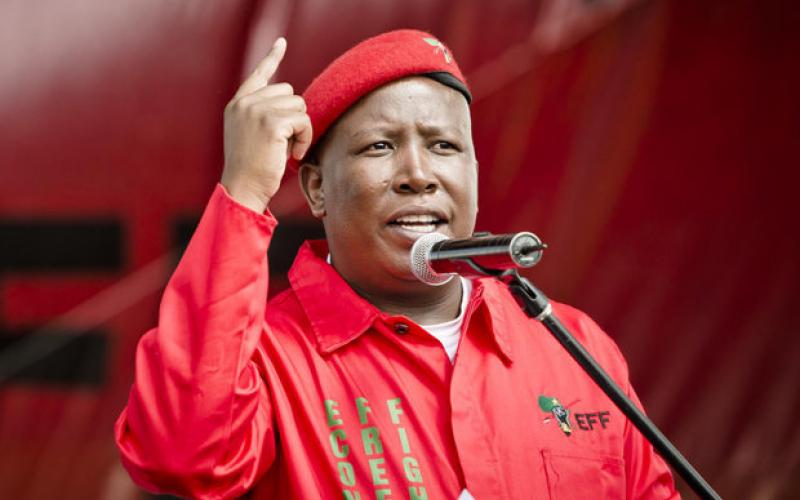 As election fever grips South Africa, the Economic Freedom Fighters’ manifesto stands out for its radical policy agenda and departure from the country’s political norms. It is time for South Africans – and the world – to take notice.

If the restriction of private property rights and radical economic reform are on the political horizon, South Africans will need to become less comfortable with inequality and brace themselves for the new normal.

Understanding Malema’s vision for the country – and why it seems to resonate so strongly with so many of our people – is no longer a choice, but a necessity.

Julius Malema the politician has come a long way since his firebrand days as leader of the African National Congress Youth League.

The younger Malema, who rallied the ruling party’s young supporters to kill for Jacob Zuma, has given way to an older, wiser and sleeker figure – and a responsible family man to boot.

Today, the media flocks to EFF press conferences where Malema plays the oracle, explaining developments within the ANC and giving the country insights into the hearts and minds of the poor – a group so often ignored despite their constituting the majority of our population.

Julius Malema has a knack for taking South Africa’s social and political pulse. His enthusiasm for social transformation, coupled with a penchant for the sometimes forgotten ideas of the political left. To his opponents, this may be his most dangerous characteristic.

Land is a big deal; the EFF plans to broker it

Of all the issues that the EFF has raised, land expropriation may be the most controversial – because it exposes the biggest elephant in our room.

Land has been called an emotive issue for black South Africans. In reality, it goes beyond emotion. It is a fundamental issue of human dignity and regaining a sense of belonging in their own country. The reason is simple and historically unambiguous: black people’s land was taken from them by whites, arbitrarily and by force.

South African history is replete with accounts of colonialist land grabs, from the original dispossession of the Khoikhoi and San people in the then Cape Colony to the settler wars against the Xhosa and Zulu people, the expulsion of the Ndebele from the Limpopo region, and incursions by the boers into what is modern-day Botswana. The list goes on.

At the heart of these horrific acts was one central aim – the theft and control of land from its original owners and the procurement of forced labour to cultivate them.

In virtually every case, we have to recognise that the aggressor was white and the victim black.

Emboldened by these early victories, South Africa’s white minority intensified its control of the country’s land. The Natives Land Act of 1913 assigned a measly seven percent (later increased to 13 percent) of the entire country to black citizens, with prime agricultural and urban land reserved exclusively for the white minority.

Far from being the root of South Africa’s land problem, this law simply legalised a process of injustice that had persisted for centuries before. With the exception of the Cape, where a somewhat liberal legal position allowed people of colour to own some of the land, South Africa was officially a White Man’s Country.

When one group considers itself superior and victorious in conquest, it sees no problem dictating to others where they should and shouldn’t live. Apartheid forced removals were the epitome of this horrific mentality, destroying lives and livelihoods of South Africa’s black, coloured, and Indian communities and dumping them in townships designed to sicken their bodies and crush their spirits.

Come 1994, the ANC inherited a country that was reeling from decades of twisted, Nazi-inspired social engineering. With ten percent of the population occupying almost 90 percent of the land – by law – South Africa was one of the world’s most unequal countries. Twenty-five years later, little has changed.

Malema was the first politician brave enough to shine a light on this absurd inequity in public – and having been exposed, it can never be re-concealed.

When Julius Malema speaks, a lot of privileged people – most of them white – can barely suppress their laughter. It is not his witty repartee that gets them going, but his African accent.

Instead of indulging in racism by mocking his words, privileged South Africans – including the author – should be listening to them very carefully. The ruling party certainly does.

Free education, expropriation without compensation, and the nationalisation of the South African Reserve Bank are key policy agendas for Cyril Ramaphosa’s ANC.

It is worth remembering that each one of these are EFF policies, once mocked and rejected by the ruling party but quickly adopted on the sly.

The ANC is aligning itself with EFF policies at a rate that alarms many on the centre-right spectrum of South Africa’s politics. Faced with the prospect of floating, disaffected voters, the ruling party’s imitation of EFF ideology proves just how strongly these ideas resonate with the majority of South Africans.

South Africa is crying out; the EFF takes time to listen

Our country’s majority don’t spend their weekends at the Waterfront or Melrose Arch. They have never seen the inside of a golf club or a day spa – unless they clean and service it for wealthy patrons.

With 40 percent of households lacking employment, they live at the mercy of an ANC government that is stumbling, almost blindly, in its attempt to provide basic services. Fiscal mismanagement and state capture are threatening the social welfare budget, which keeps millions of our people from dire poverty and possible starvation.

These are not merely dry statistics and arbitrary facts – they are the daily-lived experience of millions of our fellow citizens. We ignore their pain at our peril.

Julius Malema sparks the intellect and imagination of South Africa’s dispossessed with a fresh image of the future. Productive land, dignified households, and safe communities free from the scourge of crime and poverty are just some of the ingredients in the EFF’s proposed recipe for success.

Self-sufficiency lies at the heart of Malema’s thinking, with local communities producing food and other goods for local consumption as part-owners of local enterprises. From a radical starting point – the expropriation of land – the EFF’s long-term vision sees South Africans taking responsibility for their own prosperity and freeing themselves from the indignity of unemployment and reliance on meagre social grants.

Is it any wonder that millions of South Africans might be willing to give their vote to the EFF, a party that promises to restore the land – that cherished possession that, once lost, marked the beginning of three oppressive centuries?

The practical implementation of EFF policy has been called impossible. Its policies have been criticised for coming straight out of failed states like Venezuela. Its leaders have sparked controversy, scuffled with police officers, been removed from Parliament by force and assaulted journalists.

On paper, the EFF looks like an idealistic, pie-in-the-sky party with little chance of implementing its policies. Yet its message excites millions of South Africans – including the ANC’s main voter base.

Unlike most of us, the EFF speaks – and listens – to the majority of South Africans. Whether their mandate in the upcoming election will allow them to govern or not, their ideas are here to stay. It is time we got used to them.