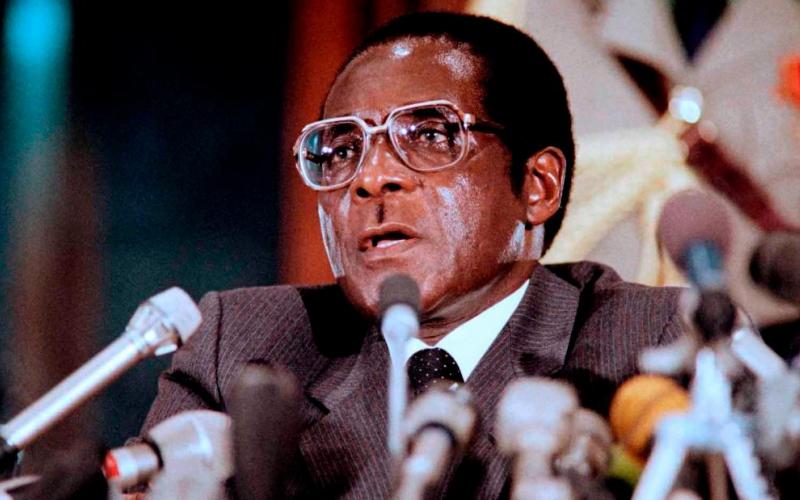 Robert Mugabe belongs to the generation of Africans who fought for Africa’s self-determination only to finally succumb to the selfish pursuit of power that has left a country with tremendous opportunity on its knees.But he is not the only big man who has betrayed the aspirations of African peoples for authentic peace, prosperity, unity and healing.

In 2009, while on a working trip to Harare, I remember ordering breakfast that cost me trillions of then Zimbabwe dollars ($100 was worth many trillions of Zim dollars!), witnessing mothers delivering babies in a rural clinic that had neither water nor electricity, looking at a pile of decomposing and smelly rubbish at the entrance of the Ministry of Health, and meeting among many others, Emmerson Mnangagwa, currently at the center of the political drama in Zimbabwe.

I also remember feeling sad because I knew Zimbabwe before. There was a time when Zimbabwe was the bread basket of Southern Africa, a stellar performer in education and literacy, and had a robust public health system. Moreover, Robert Mugabe’s was among the several pictures of towering leaders from the Third World that graced my room while I attended Medical School in Uganda in the 1980s. As a medical student who was both an atheist and Marxist at the time, and who had read Frantz Fanon’s the Wretched of the Earth, and Walter Rodney’s How Europe Underdeveloped Africa, I felt a pervasive sense of denial and despair about the African condition. As one of the senior leaders in Rwanda during the tragic years of civil war and genocide, and a student of Africa’s liberation movements, I knew how initially well-intentioned leaders in Eritrea, Ethiopia, Uganda, Angola, South Africa, Rwanda, Burundi, the Democratic Republic of Congo, South Sudan, and in many other places  had been progressively corrupted by power and lost direction. Was there something inherently wrong with us Africans, I asked myself?

The current African condition has a history. When European powers converged in Berlin for the Berlin Conference (also called the Congo Conference) of 1884-1885 to divide the continent among themselves, the ensuing scramble for Africa would ultimately culminate in 54 independent states. Africa, a huge continent of 30.22 million square km, a diverse current population of about 1.2 billion people, and tremendous natural resources, was seen by foreigners, then and now, as a lucrative business to supply cheap raw materials and a market for expensive finished products.  Before, and since then, slave traders, colonialists, cold war spies, foreign powers and corporate entities have crisscrossed Africa in search of treasure through covert and/or overt means, directly or indirectly. Often in collusion with the local ruling elite.

Looking back, there are grounds to celebrate some of Africa’s political, economic and social achievements since 1957, when Ghana blazed the trail to become the first to gain political independence from British colonial rule, all the way to South Sudan which gained independence by seceding from Sudan in 2011.

Africa’s struggle for independence and self-determination did not come cheap. Nor was it a kind donation, or an act of benevolence from a change of heart of the European powers. Self-rule was a product of sacrifice. Robert Mugabe is among many African leaders who rose to the occasion to lead their people in the hour of need.

Unfortunately, since 1957, Africa’s post-colonial experience in general, as exemplified by the rise and fall of Robert Mugabe and by the protracted crisis in Zimbabwe that has now reached a climax, is not something to be proud of. Depending on who you are talking to, Africa’s dominant narrative from the ruling elite and their international collaborators is that Africa is on the ascendancy, destined to become a powerhouse within the next few decades. To them, the glass is half-full.

On the other hand, there are those who point to Africa's sore spots and open wounds since gaining independence: poverty, HIV/AIDS, illiteracy, poor infrastructure, famines, poor governance, human rights abuses, violent conflicts, terrorism, genocide, war crimes, crimes against humanity, failed or failing states, and environmental degradation. Most African states are poor, fragile, conflict-prone and poorly governed societies where weak institutions, absence of the rule of law, and rule by big men is the order rather than the exception. These big men are largely dependent on narrow bands of elites normally recruited from their tribe and ethnic group, aid from the West and its financial institutions, or from other foreign backers. In crisis, the ruling elite who have presided, and still preside, over this sorry state adopt the language of the anti-colonial, Pan-African, democratic, national, pro-people vanguard that is reminiscent of the olden days. To this group, Africa is a half empty glass.

The real Africa is both half full and half empty.

Robert Mugabe belongs to the generation of Africans who fought for Africa’s self-determination only to finally succumb to the selfish pursuit of power that has left a country with tremendous opportunity on its knees. In this regard, Robert Mugabe is the big man of Africa par excellence, having ruled Zimbabwe since 1980. Mugabe is not the only big man who has betrayed the aspirations of African peoples for authentic peace, prosperity, unity and healing from gross abuse that stretches far back to slavery, colonialism and modern-day Africa. Big men are the general rule, rather than an exception.

Hence,  an indictment against Mugabe must be extended to the ruling party, ZANU-PF, and to Africa’s ruling elite who are totally oblivious to the megatrends that are shaping their societies, among them, Africa's youth aged 14-25 years who constitute a growing majority of a jobless population, and prone to be recruited into violent conflicts and terrorism because they have nothing to lose; immigration, migration and refugees movements that are generating pressures worldwide; the ascendancy of  Christianity and Islam with deadly potential for being exploited by local and global elites; China’s ascendancy in Africa; science, technology, and globalization creating opportunities and challenges at levels never experienced before; and non-state actors taking advantage of fragile states to impose new security threats that extend beyond Africa.

After five decades of political independence, thousands of reports on human development, tons of advice from mainly Western consultants, and trillions of aid dollars that hardly reach ordinary people, the condition of most African people remains precarious. Africa remains the continent of poor peasants, and increasingly of poor urbanized populations living on the margins of squalid slums bursting at the seams.

Africa’s ruling elite must admit that they are now primarily to blame for Africa’s problems. They must recognize that the interests of African people are sovereign and, therefore, a priority. Of these interests, nothing is more important than the right to life, security, health, education livelihoods, civil and political participation.

African ruling elite must prevent and cure the recurrent epidemics of self-inflicted conflicts. The current fire-fighting demonstrated in international peacekeeping, drones, special forces, and ad hoc security arrangements for U.S and Western armies to intervene in Africa can be temporary relief but are not sufficient to ensure lasting security, peace and development.

Conflicts within African countries remain unresolved problems because of the cut-throat competition for power among the elite. It is a life-and-death struggle to capture state power and in turn use it to access resources and/ or dispense a victor’s justice to the losers. The winner takes it all and often the losers must accept their losses or otherwise organize for the next round of bloody conflict since the status quo rarely yields power peacefully.

The antidote to all this is to democratize and enlarge the circle of people’s participation in governance, strengthen the rule of law, nurture a culture of dialogue, power-sharing and peaceful resolution of conflicts.

Africa’s ruling elite must have a clear and robust strategy to exit from being dependent on foreign aid. Africa’s natural wealth must beget value for Africans. Africa’s export of natural resources, national revenues, foreign investments and aid money while it lasts must be deployed and recycled into developing capital, knowledge and skills to create value-added products and services for Africans.  This is the trajectory of wealth creation that the rich aid-givers of today followed in the past, and still do.  Africa is not an exception.

Last, but not least, African rulers must heed the wisdom from all cultures of the world. Human progress is not solely about building material abundance and registering GDP growth, important as they are for human survival. Creative imagination, innovation, science, technology and entrepreneurship proceed from people’s quest to improve their lot in both material and spiritual domains. To do this, they discover that co-operation is both a pre-condition for survival, and an opportunity to demonstrate what Bantu-speaking peoples of Africa call Ubuntu (or human-ness). Africans must learn from their own achievements and flaws and those of other societies to nurture the sustainability, wellbeing and resilience of individuals, families, communities and nations.

A mind rich in Ubuntu peels away clan, tribe, gender, race, ethnicity, class, religion and nation identities to see the brother and sister in all other humans. Such a mind is not quick to kill and plunder.  Such a mind does not cling to power for its own sake, but to serve others. It does not commit genocide or other crimes, or easily go to war. It is a mind that shares and weeps when others suffer. It is a mind that sees dialogue, respect of others and humility as strengths. It is a mind that is happy because it fosters happiness in others.

I believe that Robert Mugabe, a man familiar with personal and societal suffering, at one time identified with the suffering of Zimbabweans and Africans. Being an African, he initially had Ubuntu which must have helped him win the hearts and minds of Zimbabweans, Africans, and many in the world. As a Christian, he must have come across the teachings of Jesus Christ, when he asks, “For what shall it profit a man, if he shall gain the whole world, and lose his own soul?” (Mark 8:36). Along the way power corrupted him and then he lost his soul. By losing his soul, he lost the umbilical cord that connected him to his people, and his nation.

Robert Mugabe gained Zimbabwe and then lost it long before the current end game drama and final act. This is teachable moment for Africa’s ruling elite and Africans.

* DR. THEOGENE RUDASINGWA is Former Ambassador of Rwanda to the United States and author of Healing a Nation: Urgent Call and Voices from Exile. E-mail: [email protected]