Popular democratic power is the way to challenge inequality 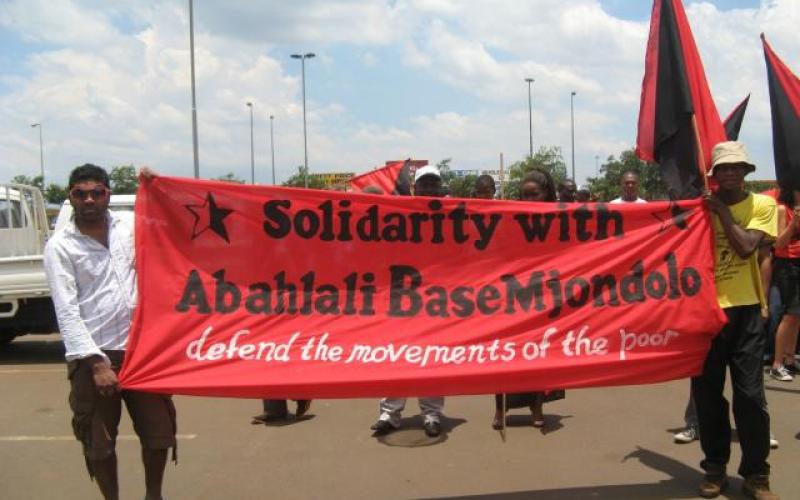 The most important task in the struggle for a more equal society is to build the power of impoverished people through building democratic popular organisations. It is through these organisations that the people can challenge the state and capital.

[This talk was presented at a forum entitled, ‘Fighting Inequality – Talks on How to Change the World’, 23 November 2016, Oslo, Norway.]

I am Thapelo Mohapi the current elected General Secretary of the movement Abahlali baseMjondolo. I would like to begin by thanking our friends at Norwegian People's Aid for the invitation to participate in this discussion.

Abahlali baseMjondolo is a democratic movement of shack dwellers and other impoverished and marginalized people in South Africa. Last year we celebrated our tenth anniversary. We are the biggest popular movement to have emerged in post-apartheid South Africa. Our movement was formed in Durban 2005 to fight for, promote and advance the interests and dignity of shack dwellers and other impoverished people. Although we do have branches in other cities, and are expanding into other provinces, our movement is concentrated in the city of the Durban and the Province of KwaZulu-Natal.

Our movement is best known for our struggle for land and housing in our cities. But we also take up all kinds of other issues such as equal access to schools, opposition to corruption and opposition to forms of development that, like mining, will displace people from their land. We take a strong stand in support of the full equality of women. We work in solidarity with migrant organisations to oppose xenophobia. But most importantly Abahlali (as our movement is popularly known) struggles for the human dignity of shack dwellers and other impoverished people. We place the question of human dignity at the centre of our politics. The movement is a space where the dignity of impoverished people is recognised. It is also a space where we come together to build our power and to use that power to struggle for a world where our dignity is recognised.

Land is fundamental to our struggle. We have occupied and held land in many new land occupations. We have also successfully resisted many evictions from old land occupations through popular protest and by using the courts. We have kept thousands of families on their land and in their homes. But, most importantly, we have built a politically conscious movement where we can, thinking together, develop a better understanding of poverty and what keeps us in poverty. Through the movement we can build our power together and organise and struggle for justice together. We are committed to a society and a world in which land, wealth and power are shared on an equal basis. We take the question of power very seriously and are committed to building the power of the oppressed. In our view a radical politics must start where the people are. It must be directed from below. We call this a living politics. Our movement and our struggle are organised around the values of ubuhlalism.

Our movement is very pleased to be able to send a delegate to this meeting. The Norwegian people played a very important in supporting the struggle against apartheid. We remember and acknowledge that role. But there is another reason why we are very happy to be able to send a delegate to this meeting. For many years the international solidarity networks that want to support struggles for social justice in South Africa have mostly chosen to support NGOs rather than popular struggles and movements. Norwegian People’s Aid recognises that there is an important difference between NGOs and popular organisations. Your organisation also understands that as oppressed people we must organise and liberate ourselves and that we are already organising and struggling everyday. For this reason we respect your organisation and see a way to building relationships based on solidarity, respect and equality.

In 1994 our parents stood in those long queues to cast their first vote in what was to become a “New South Africa”. We all thought that things would be better. Our parents had fought a good fight against the apartheid regime so that we could live a better life. But that better life did not come to the majority of the people. Millions are still living in abject poverty. Our lives count for nothing to the South African government. We are left to rot and to die in shacks. We are still living in the mud like pigs. We are still subjected to fire and floods. Every year lives are lost in these fires and floods.

When the new democracy came we found that our voices did not count to the government. When we raised our issues with the state we faced arrests, assault, death threats, slander and even murder. In Kwazulu-Natal, where I come from, there is what we call a politics of blood. In the year 2014 our comrades who were uncovering the corruption that was taking place in their areas had to pay a heavy price for this cause. They lost their lives in the struggle. Assassination has become a common feature of politics in KwaZulu-Natal. Today we have orphans, widows and widowers as a result of this.

Inequality is not just a matter of colonial and apartheid history. We continue to be actively oppressed today. Previous generations were made poor by colonialism and apartheid. We are kept poor by new forms of oppression. I would like to give three examples of this from three different branches of our movement.

In the Briardene community, where I come from, we were about to be evicted by a wealthy businessman who happens to be a provincial police officer. We are a community of 280 families. He would come to where we live, armed and with other police officers, and demolish our shacks. In 2012 he burnt our shacks with petrol. We lost everything. We then decided that we should go to the street and protest outside his house against this injustice. We were sick and tired of this abuse by this particular person. He came to us and pulled out his firearm and opened fire at the crowed. One of the community members was shot and injured in the process. Fortunately he was not killed. The bullet hit him in the thigh and broke his bone. That was the start of the struggle. We were alone in this. We tried to speak to the government officials to assist, but they could not assist us. The local councillor was in favour of us being removed from this land. We have been living in this community for more than 20 years. I grew up in this area. Both my parents passed on in this community.

This businessman then approached the High Court in Durban to get a court order to evict us. We were about to be evicted in a place where we have lived for more than 20 years. We did not have a legal representative to prevent the eviction. We then approached Abahlali baseMjondolo for assistance. We leant to organise and build our power from below. At first we had to represent ourselves as the community at the High Court. But later Abahlali assisted us with a very good legal team. We managed to successfully fight against this eviction with the help of Abahlali. Through organisation and struggle we as the community have managed to achieve a lot. Today we are still on the land. We also have sanitation in the form of toilets and water. We are also united, democratically organised and working with comrades across the city, the country and the world for a just social order.

In Cato Crest, Abahlali has a powerful branch on the Marikana Land Occupation. The people decided to build on this land after they were left out in a government housing project because they were not members of the ruling party. Here our members were evicted more than 24 times. The municipality disobeyed a court order that prevented them from demolishing people’s homes. Because the politicians and government officials regard themselves as bigger than the law they continued to demolish people’s houses.

In a protest march which took place in September 2014 in the main road in Cato Crest a 17-yearold girl was brutally murdered by the police. Also in the same year Nkululeko Gwala, who was the chairperson of Abahlali in the branch of Cato Crest, was murdered by unknown hit men. The people who murdered him have not been apprehended till today. Gwala was publicly threatened by the chairperson of the ANC in Durban just before his assassination and we believe that the politicians were behind his murder. This was a very difficult time in our movement. Some of our leaders had to go underground. This was not the first time. Some of our leaders and members also had to go underground in 2009. We had to hide from those who wanted to kill us.

We have been killed and tortured by the very people whom we entrusted with our votes. Our crime is that we are standing up for our dignity. When we struggle for houses we are struggling for something that is in the Freedom Charter and that is also a right that is enshrined in the Constitution: the right to housing.

Today the people of Cato Crest are still holding the land and are living peacefully. This is through the struggles that the people went through. It is through struggle that we managed to win the right to land. That struggle included road blockades, rebuilding after each eviction, court action, solidarity with comrades across the city and international solidarity. It is struggle that builds collective power from below and opens the road to freedom and justice.

In KwaNdengezi the ward councillor was involved in the selling of government houses in daylight. Our chairperson in this branch, Ms Thuli Ndlovu, was assasinated for uncovering this corruption. On the eve of her death two councillors threatened her over the phone. Fortunately in her case the two ward councillors were convicted and sentenced to life imprisonment together with the hit man that they hired to carry out their dirty work.

Through these hardships the movement has grown immensely. We have about 35 500 members in good standing in the Kwazulu-Natal province. We have managed to create a home for thousands of people in our movement.

In the past people who are living in shacks were undermined. They were taken as people who can’t think. Government, many NGOs and some academics all treated us as people who couldn’t think. But through our struggle we have built our power together and we are now able to participate in many of the discussions that effect our lives. The government today recognises us as a movement. They have started to recognise us as a movement because our struggle, over ten years, has forced them to recognise us.

However we have a long way to go before we can build a more equal society. For us the most important task in the struggle to build a more equal society is to build the power of impoverished people through building democratic popular organisations. It is through these kinds of organisations that we can challenge the state and capital. We are always keen to make alliances, based on equality and mutual respect, with others, in South Africa and internationally, who share our commitment to democracy, dignity and justice.