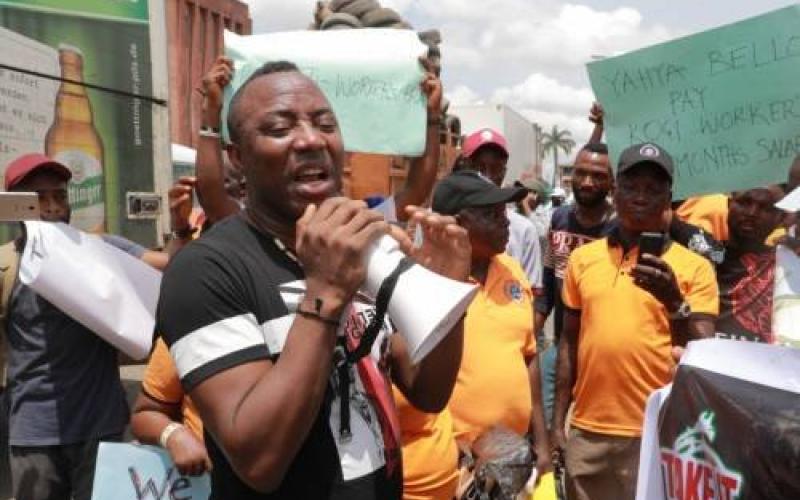 For the Nigerian Left, the strongest lesson of what may now be called Nigeria’s #RevolutionNow—that is, the 5 August mass protests organised by some young fragments of the movement—may be formulated as a warning.

If Nigeria survives long enough from the current battering of the country’s ruling class, variants of what was attempted on 5 August may be attempted again and again until a spark leads to a national conflagration or a successful popular revolution resulting from a better conceived, planned and executed strategy.

Such a successful popular revolution will present to every Left entity—organisation or individual—the choice of joining the revolution as an active participant, thereby ending this long stalemate. An implicit premise of this proposition is that Nigeria’s present ruling class has refused to, or indeed cannot mobilise the social forces necessary to pull the nation out of its ever-expanding crisis.

One may start the story of #RevolutionNow by recalling the 2019 general elections conducted earlier this year. The official result of the presidential contest showed that President Muhammadu Buhari of the All Progressives Congress won while the other presidential candidates, including Omoyele Sowore of the Leftist African Action Congress, lost. This point should be conceded.

However, it is a long-established and tested principle of political strategy that in a non-democratic setting such as Nigeria, a left-wing formation or a formation with a left-wing leadership may organise itself, its programmes and its activities in distinct but connected levels, or in concentric circles.

This simple principle “prima facie” explains and justifies, ideologically and historically, the link between Sowore’s presidential contest and his “involvement in” or “leadership of” #RevolutionNow. Sowore himself may not be acutely aware of this. But Sowore’s lawyer, radical human rights lawyer, Femi Falana, should theoretically be aware of the principle. In any case I have seen that Falana endorses its application in the present case if the term “revolution”, as used in #RevolutionNow, is demystified and given its factual, true and contextual meaning.

We may briefly go to some background: Omoyele Sowore was the president of the students’ union of the University of Lagos for a period during the long military dictatorship of mid-1980s to late 1990s. He was a radical, left-wing and popular students’ leader. He also commanded attention in the national students’ movement. He was, however, ideologically and organsationally outside the Marxist core that maintained and exercised hegemony in the national students’ movement during that period. It was a measure of its success in strategy and tactics that on several campuses, this Marxist core managed to strongly “influence” students’ politics without insisting that the official leaderships be revolutionary Marxists.

Now, how do we assess #RevolutionNow? We may begin by asserting that proclamations of revolutions are not new. In fact, in certain circumstances, a proclamation is necessary, if not mandatory—if it is a “people’s revolution” or a “revolution of the people.” But this proclamation is made not to herald a revolution-in-general (which the masses ought to have known) but to announce the start of a new stage, such as armed struggle.

It is this tradition of proclamation of people’s revolution that right-wing coup makers copy and bastardise. The content, tone and language of a revolutionary proclamation make the statement indelible in the history of the liberation of the people. Finally, it should be obvious that at the point of making a proclamation, the leadership should be unreachable.

Does #RevolutionNow, in its broad ideological and political amateurishness, have precedents in Nigeria? Yes, it has precedents in Nigeria. Have I taken part in the organisation and leadership of any? Yes, I have taken part in more than one. Which one is the freshest in my memory? The “revolution” of January 1975 in Lagos: that is in pre-Internet and pre-social media Nigeria. Were mistakes committed in it? Yes, grave mistakes were committed—although these were not the fundamental reasons the “revolution” did not succeed in its illusory ultimate objective!

Those old enough may remember that between late 1974 and early 1975 there was a wave of strikes and mass protests throughout the country—but especially in Lagos, which was then the federal capital of Nigeria. The general issues included corruption, “bad governance” and the shifting of the promised date for disengagement of the military from governance. But the particular national issue was the long-awaited wage reviews. Among the radical groups, which participated in the struggle was Anti-Poverty Movement of Nigeria (APMON), a revolutionary Marxist formation, a mass mobiliser with an unknown operational base and a shadowy leadership.

At the start of the struggle I was transiting from being a graduate student to being a lecturer in the Department of Mathematics, University of Lagos. Comrade Bene was a graduate student of Botany in the same university. Bene and I were both in the leadership of APMON. In addition, I was the Secretary of APMON and my office in the department was APMON’s coordinating centre—unknown to anyone outside the leadership. I was 28 and Bene was 27. In crisis periods, the link between this coordinating centre and members of APMON’s leadership outside the campus and outside Lagos was provided by the late Comrade Tony Engurube, a revolutionary Marxist of Ijaw parentage but very fluent in Yoruba, French and a certain Swedish language—in addition to English, of course.

One evening, during the particular struggle under reference, we stumbled on a rough document carrying what was claimed by the author or authors to be a proposed wage structure for the army. The figures were scandalously high. An emergency meeting of APMON’s leadership was called the next day. The unanimous decision of this fateful meeting was that the production of an agitational publication in support of striking dock workers and medical doctors should be stopped for the “uncovered” military wage structure to be added as an appendix.

About 400 copies of the revised publication were to be produced and distributed covertly at strategic locations in Lagos. The decision was carried out immediately. That was it! The publication, to use a modern language, became “viral” within 72 hours. The effect was electrifying. My banker-senior brother with whom I was squatting in Lagos came back from work to show me a paper “some people” were distributing in Lagos Island! We both shouted!

Security agents poured out in search of “subversive” and “unpatriotic” people, “enemies of the nation”. Another emergency meeting of APMON’s leadership was called. However, the decision this time was not unanimous. But the majority opinion—which was supposed to be binding—was that the organisation had achieved its realizable maximum objective and should suspend all public and private agitation, with or without the “document”.

As the meeting was dispersing, it could be observed that some comrades were still not happy with the decision. They believed that the “revolution” was nearing victory and required only a final push! In fact, earlier that day, a particular comrade, with some APMON cadres, had gone to Nigeria’s land border with Benin Republic at Idi-Iroko to urge border guards not to allow certain senior state functionaries to escape from the country!

Three days later, soldiers swooped on him as he was agitating at Lawanson Bus Stop! And two days later, two comrades, one from a well-known Ondo family, and myself, not knowing that we had been uncovered and were just being lured and trailed, drove into the military police headquarters at Apapa. We went there in a prestigious Volvo car to secure the release of our detained comrade! The gates closed behind us for six months.

*Edwin Madunagu is a mathematician and journalist who writes from Calabar, Cross River State, Nigeria.