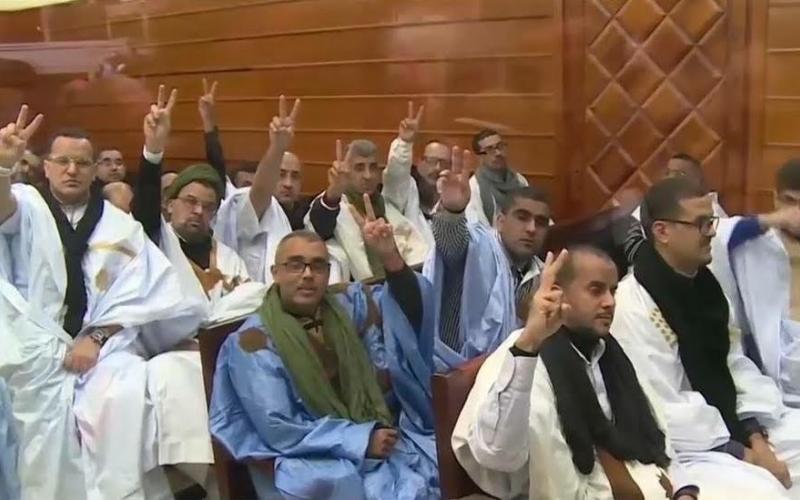 International presence and pressure is necessary to ensure a fair re-trial, set to continue on March 13, against the Gdeim Izik Group from Moroccan-occupied Western Sahara, who Amnesty International says were “unfairly convicted.” The Group strenuously denies the charges, claim that they are politically motivated, and insist that confessions used at the trial were obtained using torture.

In 2013, 21 members of the so-called Gdeim Izik Group were given sentences of between 20 years and life imprisonment in a military court for allegedly belonging to a “criminal group” and for acts of “deadly violence” against Moroccan “public forces in the line of duty.”

The offenses allegedly happened during and after the violent Moroccan raid of the Saharawi Gdeim Izik protest camp outside El Aaiun in Moroccan-occupied Western Sahara, where over 15,000 Saharawis peacefully protested against Moroccan occupation in late-2010. The Group strenuously denies the charges, claim that they are politically motivated, and insist that confessions used at the trial were obtained using torture.

Amnesty International stated in 2016 that the 2013-trial was “grossly unfair,” that the Gdeim Izik Group were “unfairly convicted”, and that the claims of confessions obtained by torture must be independently investigated for the re-trial to be fair.

Unfair trial
But the re-trial of the Gdeim Izik Group has so far been biased and politically motivated, the most basic principles of a fair trial have not been met, and a court representing a colonial power does not have any jurisdiction in their homeland, Western Sahara.

Nevertheless, the judge has said that he did not see the international agreements that Morocco has signed as legally binding in the trial and furthermore refused the defendants bail, even though they have been in prison for six years after a trial that was declared null and void. The most basic principles of a fair trial have thus not been met.

These are the overall conclusions, made by Norwegian law student Tone Moe and Portuguese human rights activist Isabel Lourenco, who were present at the initial court sessions of the re-trial on December 26, 2016 and 23-25 January in Sale near Rabat.

Hostile environment
Other findings made by Moe and Lourenco were that the defence team were not given access to the full contents of the case file, were interrupted “numerous times” by the judge and prosecutor while the prosecution was allowed to speak freely, were not allowed to speak about the political background for the Gdeim Izik protest camp, and that the defendants were often unable to speak with their lawyers, to hear what was said in the courtroom or to take notes due to being denied pens and paper.

There was also a lot of hostility directed towards the Saharawis who took an interest in the case, according to Moe and Lourenco.

The Moroccan press referred to the defendants as “criminals” and seemingly regarded them as guilty before the case was concluded. Saharawis who wished to protest or enter the court room had dead rats and other objects thrown at them or were threatened by Moroccan bystanders, and some were refused admission to the court room.

Business as usual
According to Abba Malainin, the representative in Denmark of Saharawi liberation movement Polisario, these conclusions are consistent with how Morocco deals with matters regarding Western Sahara, or “the southern provinces” as the colony is usually called by the Moroccan authorities and in the Moroccan media.

He therefore doubts if they will receive a fair trial without any real pressure being put on Morocco, both in regard to the case and Western Sahara in general.

“Many of the accused are leading members of Saharawi organizations and were conducting negotiations with the Moroccan authorities prior to the violent dismantlement of the Gdeim Izik camp. The real reason for their detention is their activism for human rights in occupied Western Sahara, their support for the Saharawi people’s right to self-determination, and their work to expose the illegal exploitation of Western Sahara’s natural resources by Morocco and third parties such as the EU, says Malainin.

Even so, the spirits of the 21 Saharawi defendants were apparently still high during the court sessions. On more than one occasion upon arriving in court, where they appeared dressed in traditional Saharawi Daraa’s, they chanted "Labadil, Labadil, Antakrir El Masir” - "there is no other solution than self-determination.”

Morocco invaded Western Sahara and suppressed the indigenous Saharawi population in 1975 in violation of international law. They have consistently stalled UN demands for a referendum on the status of the colony since the cease-fire with Polisario in 1991. Human rights organizations such as Amnesty International and Freedom House regard the Moroccan regime in Western Sahara as one of the most repressive in the world, and the UN Special Rapporteur for Torture, Juan Mendez, reported “systematic patterns of acts of torture and ill-treatment during the detention and arrest process” in Western Sahara in 2013.