South Africa: Which way for a new workers’ party? 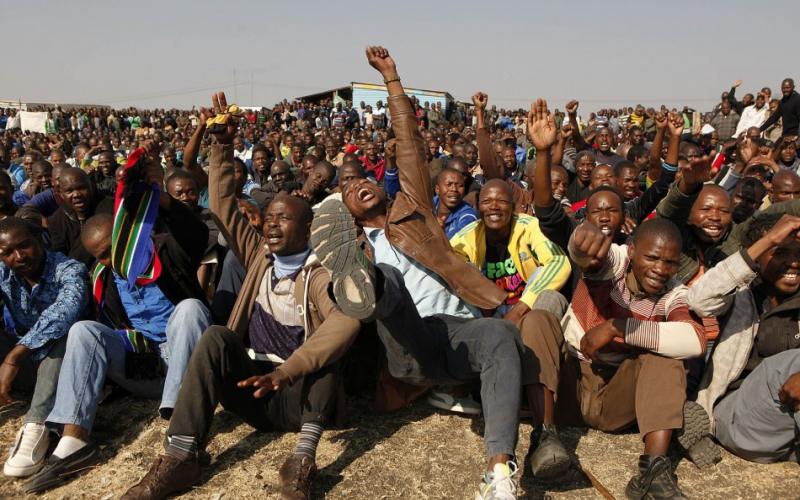 What is required is a non-sectarian political party of the working class that could go beyond unionism to defend the aspirations of the entire social class, not only those few with full-time employment. So, the leftists ought to clearly distinguish between unionism and activism if the working class is going to become a class-for-itself.

The alarm-bells had better be ringing in the South African Left after Andrew Chirwa, the president of the National Union of Metalworkers (Numsa), referred to “Numsa’s planned new workers’ party” (‘New union federation comes from grassroots’, Mail and Guardian, 13 to 19 May). The Numsa leadership does not seem to view the envisaged workers’ party as an all-inclusive and non-sectarian undertaking. So, the Workers’ Summit held on April 30 in Johannesburg revealed again that the South African left wing finds itself at a crossroads today. This dilemma is reflected in the widespread confusion about trade unionism and a broader left-leaning project. Despite the crisis of unionism, the leftists expect organized labour to take the initiative on an endeavour as crucial as the mass workers’ party. Even the declaration from the summit acknowledged that ‘never since the days of apartheid has the union movement been weaker and more fragmented’. The context, of course, is not only confined to South Africa, but is indeed an irrevocable global one. The labour unions all over the world are in the midst of their worst crunch ever due to the technological revolution that made most permanent jobs redundant. How could the trade unions then be driving the process of launching a workers’ party?

The summit statement is amiss when it asserted that ‘never have workers had a greater need for the protection of strong trade unions and a powerful, united federation to defend jobs and living standards’. Trade unions are far too partial to be able to do that successfully at this juncture and in future. What is required is a non-sectarian political party of the working class that could go beyond unionism to defend the aspirations of the entire social class, not only those few with full-time employment. So, the leftists ought to clearly distinguish between unionism and activism if the working class is going to become a class-for-itself.

The verbal radicalism of the Numsa leaders contradicts their immersion in social-democratic politics over a period of 20 years. This is exemplified by their silence when Nelson Mandela single-handedly decided to drop the key clause of the Freedom Charter, namely, nationalisation. Moreover, the situation is worsened by these leaders seemingly being oblivious to the existential crisis of the Charterist Movement. The insistence of the Numsa leadership on the Freedom Charter as a minimum political program is meant to solidify their top positions in any new formation, but is also a divisive ultimatum and excludes significant sections of the left wing and the working class in general. It is indeed debatable whether or not the Freedom Charter enjoys support among the unemployed, the landless and the homeless since that document is hushed about crucial contemporary issues such as the right to work, a basic income grant, social housing, the ecological catastrophe, etc. Furthermore, besides being characterized by sexist language, that Charter promotes ethnocentrism by recognizing national or ethnic groups. This is why the use of the term ‘African’ by the Charterists is really as an ethnic label. In short, the Freedom Charter is outdated.

As far as the South African Left is concerned, the need to maintain a mass base – usually interpreted as trade unions – means that political objectives are compromised in the sense that the interests of a subgroup of the working class are served. The realistic fear of the left wing of being merely sects makes it sometimes go along with reformist aims. It loses its balance. The focus on a living wage, say, is a goal of the employed and represents a validation of the wage system, which is central to the rationality of the status quo. But, as Jane Duncan maintained, the factory is no longer the epicentre of organizing the working class. What are called for are political demands that could assist the majority of the working class and further an egalitarian logic. If anything, the primary goal of the Left ought to be the implementation of the right to work, which is the most basic social right. It is time for the South African leftists to choose between prioritizing the aspirations of – what Andrѐ Gorz calls - the neo-proletariat, i.e. the unemployed, the precariously employed and all those alienated from their jobs, or that of an ever-shrinking minority, viz. all those with full-time (and fulfilling) jobs.

A workers’ party would need to have its mass base among the jobless as this constitutes the mainstream of the working class. The so-called neo-proletariat must determine the political program of such a party and the right to work ought to be interpreted first and foremost in the context of unemployed people. This could mean a struggle for job sharing within a 20-hour work-week, the creation of new jobs in the public and social services and climate jobs. Given the interests of metalworkers, a dialogue would be necessary about the establishment (or not) of additional jobs in the industrial sector against the background of the ecological disaster.

Similarly, a movement for a basic income grant of R12 500 would be desirable. This is not only about fighting for a decent living for all, but also about expressing solidarity with the militant mineworkers of Marikana and the farmworkers of the Western Cape. The fight for social housing would be indispensable as a means to rally people in informal settlements behind a workers’ party, while a campaign for the right to food could draw in the entire social class in a situation of ever-increasing food prices.

It would be required of the Left to clearly separate the new trade union federation, the united front, the movement for socialism and the workers’ party as different formations. This also implies that these structures must not share the same leadership. Leaders ought to only wear one political cap. At the same time, the rank-and-file members might be encouraged to wear many political hats in order to ensure that grassroots issues are canvassed inside a party of the working class.

And such a political party ought to practice the highest level of internal democracy. This suggests first and foremost that it must uphold the principle of non-sectarianism and that all progressive political streams should be recognized. Likewise, the right to political tendencies would be permitted to make possible the open contestation of different ideas. Due to the regional nature of the economy, the mass workers’ party ought to organise throughout the sub-region. All left-wing formations in southern Africa must form a non-sectarian interim committee that could begin to arrange a conference for the formation of such a mass workers’ party. The political consciousness and skill levels in all small groupings would be invaluable to such a party.

It is a strategic blunder on the part of the South African Left to wait for organized labour to take the lead on the mass workers’ party. It is possible to build a foundation for such a party of the working class from the unity of all the existing left-wing parties in South Africa, i.e. the Democratic Left Front, the Workers’ and Socialist Party, the New Unity Movement, the Socialist Party of Azania, etc. The effort should undoubtedly involve the Marikana mineworkers and the Western Cape farmworkers, but also generally the organisations of the unemployed, the landless, the homeless, etc. The political energy of the movements against outsourcing, against fees, against rape, against racism, and so forth, would be essential to the realisation of such a new political structure. And all the left-wing formations in the sub-region, for instance, Lalit in Mauritius and the Marxist Group of Namibia should be embraced.

Ironically, Chirwa’s article appears at a time when the Brazilian Workers’ Party – which was based on metalworkers there – has been pushed out of power without having brought about fundamental change. This had better make South African leftists realise that another 20 years should not be wasted here to construct a similar social-liberal party. At the same time, the landless workers of Brazil or the neo-proletariat of Argentina, for example, demonstrated through their mass action that they can exercise political power. The myth that only the organised working class has such power ought to be dispelled.

* Shaun Whittaker was a member of the Workers’ Organisation for Socialist Action (Wosa).