It is widely acknowledged that electoral participation is the cornerstone of modern democracy. Leading political scientists think low turn-out is a “common symptom of democratic ill health” (Norris 2012:221), and of “a crisis of democracy…[and] legitimacy” (Przeworski 2008:126). Politicians are thought to have more incentives to espouse policies in the ‘public interest’ when majority of citizens take free and fair elections seriously. It was partly for these reasons that in the run-up to Lesotho’s snap election on 3 June 2017 — the third in five years— Lesotho’s Independent Electoral Commission (IEC) embarked on an ambitious campaign to attain a voter turnout of 85%. If achieved, this would have eclipsed the 47% average turnout recorded in the previous general elections.

This being a snap election, IEC’s ‘85% voter turnout campaign’ was limited to within the three months of the election campaigning period (from March to June 2017). The limited time notwithstanding, the campaign was rather ill-informed of the real factors behind the voter apathy that goes back to 2007, and is one of the lowest in the SADC region. The content of the campaign material was not underpinned by empirical evidence regarding the factors that keep the majority of Basotho disinterested in voting.

The IEC and its pre-election campaign had absolutely no social media presence despite its main target being the youth and first-time voters. The result was that voter-turnout in 2017 remained roughly as it has been over the past four general elections (see Figure 1). 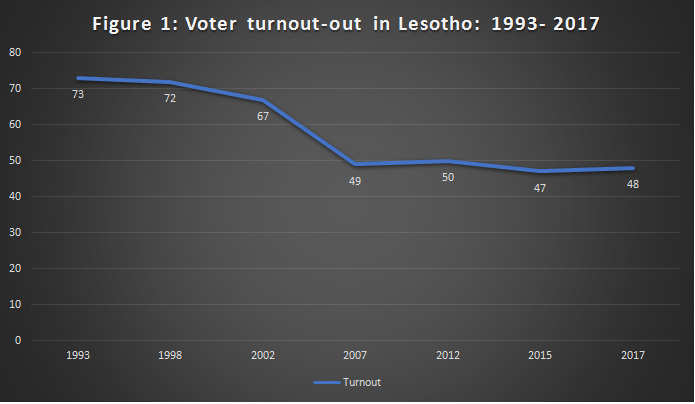 A few hypotheses have been advanced regarding the low turnout in this election. The IEC spokesperson, Tuoe Hant’si conjectured that the presence of the members of Lesotho Defence Force (LDF) in the immediate vicinity of the voting stations might have intimidated potential voters, nullifying the positive effect of the ‘85% campaign’. Hantsi’s suspicions might hold water. While LDF has a long history of meddling in national politics, soldiers are usually confined to the barracks on the polling day.

Amidst allegations of connivance between powerful individuals within LDF and senior politicians in government, the unprecedented presence of armed soldiers around polling areas might have had a chilling effect. But we have no way of measuring how big the impact this was on turnout.

I have argued elsewhere that central to Lesotho’s high levels of apathy is an electorate that has been disenchanted with a fractured democracy for so long that it has given up on the notion that ‘democracy is the worst form of government except for all others’. Basotho have grown weary of the political class that often pervert the idea of democracy to advance personal interests.

Regarding the recent poll, the straw that broke the Carmel’s back pertains to the circumstances surrounding the decision by the prime minister and the king to call an election instead of handing over to the opposition after the former lost the confidence of the majority of parliamentarians.

An analysis of the 5th round (circa 2013) of Afrobarometer survey on Lesotho confirms that older individuals and rural folks are likely to vote. Trust in the prime minister also has a positive effect on turnout. The coefficient of trust in opposition parties is also positive, but not statistically significant.

Notably, an increase of one standard deviation in the perception that the government is losing the war on corruption decreases the probability of taking part in Lesotho’s general election by 0.033 on average. This is quite a sizable statistical effect. Although the effect size is relatively smaller, increase in the frequency of paying bribes also reduces the likelihood of voting in this country.

In addition, anecdotal evidence suggests that the serious allegations of impunity that dogged the administration of the outgoing Prime Minister Pakalitha Mosisili, (1998- 2012 and 2015-2017) and the antagonistic reaction of his cronies to corruption allegations cemented voter apathy. Just before it collapsed, Mosisili’s government was besieged by a plethora of claims of nepotism and the wanton violation of rules, including public procurement regulations.

In fact, rampant corruption and marginalisation are believed to be among the major reasons for the split of Mosisili’s political party, Democratic Congress (DC), which precipitated a successful vote of no confidence in March 2017.

It is also important to note that throughout Mosisili’s premiership of 16 years, Lesotho consistently ranked below the global average on the Transparency International’s Corruption Perception Index (CPI). Incidentally, Lesotho’s ranking improved considerably in the two years that Mosisili was out of power. While CPI is not a perfect measure of corruption, it provides a rough idea of its pervasiveness, in addition to being strongly correlated with more objective measures of accountability and the rule of law. It is not a wonder that CPI is highly regarded in the international development community, and often informs advocacy in the global fight against corruption.

The reasons for low turnout proffered in the foregoing put the blame, squarely, on the dynamics in the political environment, especially the self-centred behaviour of the political elites. But, the potentially unreliable voters roll might exaggerate Basotho’s apathy.

It is now common for Lesotho’s electoral agency to raise concerns about its state of preparedness and the integrity of the electors’ register in the run up to snap general elections. Shortly before the general election of 2012, an outgoing IEC commissioner claimed that the voters’ roll was highly defective, and that there was urgent need for voter re-registration.

Elections expert and IEC’s consultant, Robert Johnson, later corroborated these claims, estimating that the register was inflated by more than 100 000 voters. This is not a small figure in a country of 2 million people. It is important to mention that Johnson pinned this down to insufficient cleaning and updating of the register by the IEC, rather than a deliberate plan to rig elections.

Once again, in 2015, the current chairman of the IEC raised concerns about the poor state of the voters roll. The EISA Election Observer Mission noted that the total number of registered voters represented 110% of the voting age population, according to the 2015 population census projections.

While IEC always comes out before the polling day to assure the public that identified irregularities and concerns have been addressed, it is difficult to independently verify these declarations.

Also, one wonders how effective, given a very short period within which IEC prepares for a snap election, are the crude and cumbersome methods currently in place to purge the register. One of these methods entails sending out personnel to villages to identify and compile a list of deceased voters. In this year’s election, however, IEC did not have time to undertake this extremely unwieldy voter verification process.

While a growing number of African countries are adopting advanced biometric technology to ease the burden of auditing the voters roll and verifying electors during the poll, Lesotho is still stuck with the more rudimentary methods.

It is plausible, given the snap nature of the recent general elections and the capacity constraints of the IEC, that the faulty register consistently over-estimates the number of registered voters. If this is true, the actual turnout is possibly higher than the official figures. A bloated register overestimates the number of expected voters compared to the actual voters.

This analysis should not be interpreted as an insinuation that the faulty voters roll was designed to favour some political party/ parties over the others. With every stage of the polling process open to scrutiny by representatives of more than thirty political parties and hundreds of election observers, it is difficult to take advantage of a defective voters roll to rig elections.

One of the possibly main correlates of turnout in Lesotho is perceptions and experiences of corruption. When coupled with widespread poverty and the ever-narrowing prospects of upward mobility for a majority of the youth, high corruption perceptions undermine the belief that citizens’ involvement in decision-making processes of the state makes a difference.

The new Prime Minister Tom Thabane campaigned on a strong platform of zero-tolerance for corruption. Following through on his promises to address the cancer of corruption will not only strengthen his political party — currently the largest in Lesotho — it will also go a long way towards restoring Basotho’s faith in democratic politics.

Voter turnout is also likely to improve as the Independent Electoral Commission graduates from the short, temporary and election-focused voter education programme to a comprehensive, targeted and continuous democracy education programme.

Lastly, the IEC needs to acquire advanced Biometric Verification Devices (BVDs), such as the ones currently in use in Ghana. This will not come cheap and their technical glitches will mean that voting could proceed much more slowly, as was the case in the 2015 presidential election in Nigeria. But, it will go a long way towards easing the qualms about the integrity of the voters’ roll, such as recently expressed by Mothejoa Metsing, the outgoing Deputy Prime Minister and leader of Lesotho Congress for Democracy.

Other than helping to keep the voters roll up-to-date, BVDs can aid in the quick transmission of voting stations’ results to the Results Co-ordination and Announcement Centre in the capital, or wherever IEC chooses to announce election results. This can speed up election announcement process and potentially reduce temptations to tinker with the results at the polling stations.

* MOLETSANE MONYAKE is a PhD researcher at the Centre for the Study of Corruption, University of Sussex, UK.