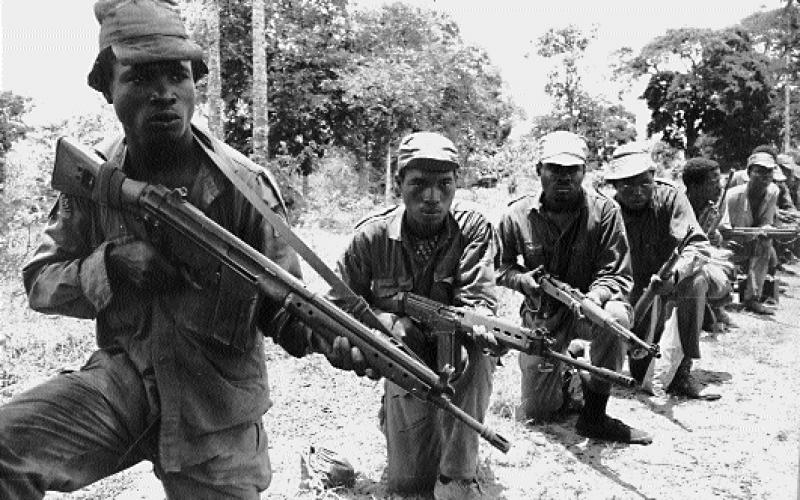 Isn’t it an interesting coincidence that Britons have voted to leave the European Union exactly 50 years after the British government helped ruthlessly crush the Biafra secession in Nigeria? Aren’t all people, whether Biafran or British, entitled to the same right of self-determination?

“Denial is the final stage that lasts throughout and always follows a genocide. It is among the surest indicators of further genocidal massacres. The perpetrators of genocide … try to cover up the evidence … They deny that they committed any crimes, and often blame what happened on the victims. They block investigations of the crimes, and continue to govern … with impunity … unless they are captured and a tribunal is established to try them. The response to denial is punishment by an international tribunal or national courts...” (Gregory Stanton, President, Genocide Watch, Professor of genocide studies and prevention, George Mason University, Virginia.)

On 6 July 1967, Nigeria expands the territorial range of its execution of the Igbo genocide, the foundational genocide of post-(European)conquest Africa, which it launched 14 months earlier, 29 May 1966, murdering 100,000 Igbo people. Now, it embarks on a land, air  and sea-borne invasion of Biafra, with the British government, under the leadership of Harold Wilson, playing a key if not central role in the campaign (http://www.pambazuka.org/human-security/igbo-genocide-britain-and-united-states-pt1, accessed 6 July 2016). Indeed without British support, pointedly if not ironically 50 years before Brexit, the Igbo genocide, this crime against humanity, would probably not have occurred. This Phase-III of the genocide stretches for 30 months during which 3 million Igbo are murdered.

Nigeria is supported militarily, diplomatically and politically in its invasion by a string of allies, notably Britain, as already stated, Egypt, the Sudan, Saudi Arabia and the Soviet Union. Right from the outset, genocidist Nigeria establishes on the ground and employs rape and abduction of Igbo girls and women and the public execution of Igbo boys and men as pivotal instruments in waging the campaign. Its ghoulish anthem of the genocide, broadcast uninterruptedly on state-owned Kaduna radio (shortwave transmission) and television and with editorial comments on the theme, regularly published in both state-owned New Nigerian (daily) newspaper and (Hausa) weekly Gaskiya Ta fi Kwabo during the period, has these lyrics in Hausa:

(English translation: Let’s go murder the damned Igbo/Murder their men and boys/Rape their wives and daughters/Cart off their property.)

This genocidist intent, particularly its empirically earmarked specifics, is unequivocally explicit and its overarching method sets the precedent of the savagery and barbarity that are the hallmarks of the genocide and subsequent genocides in Africa as Rwanda (1994), Darfur/Nuba Mountains/Blue Nile/South Kordofan (the Sudan, variously since 2004), and Democratic Republic of the Congo (since the late 1990s) attest.

At the apogee of the Igbo genocide, beginning from the second-half of 1968 when thousands of Igbo children and older citizens die daily from starvation, one of the genocidist’s publicly-stated “weapons” in the prosecution of the crime as articulated by chief “theorist” Obafemi Awolowo himself, British Prime Minister Wilson insists, most unconscionably, when he informs Clyde Ferguson (United States State Department Special Coordinator for Relief to Biafra) that he, Harold Wilson, “would accept half a million dead Biafrans if that was what it took” the Nigerian génocidaires to destroy the Igbo resistance to the genocide (Roger Morris, Uncertain Greatness: Henry Kissinger and American Foreign Policy [London and New York: Quartet Books, 1977]: 122).

Nigeria in fact ends up murdering 3 million Igbo – 2 and one-half million more than Wilson’s grim 500,000 Igbo-death wish. Furthermore, it is indeed a telling irony, given British support for Nigeria and the génocidaires’ strategy of rape and abduction of Igbo womanhood in Biafra, that it is in London, in June 2014, forty-seven years later, that the first international conference on “rape and sexual violence” in war, with emphasis on Africa (and particular focus on the Democratic Republic of the Congo), is hosted by none other than the British government in which Foreign Minister William Hague describes rape as “‘one of the great mass crimes’ of modern times” (BBC News, 10 June 2014).

In Biafra, beginning 6 July 1967, every Igbo town or village overrun by the Nigerian génocidaires becomes  a gruesome milestone in an inexorable march of rape, death, and destruction:

As contemporary Nigeria demonstrates, most graphically, as these lines are written, grounded genocidist advocates/“theorists”/operatives especially Obafemi Awolowo, Tony Enaharo, Hassan Katsina, Alison Ayida, Olusegun Obasanjo, Gbadomosi King, Umaru Dikko, Benjamin Adekunle, Muhammadu Buhari, Yakubu Gowon, Murtala Muhammed, Yakubu Danjuma, Ibrahim Haruna and Ibrahim Taiwo are perhaps just coming to terms with the realisation that their thoughts and deeds have incubated within their very own and become hauntingly cyclical across generations – DNA signature. This is precisely why survivors from these purveyors of state-directed mass slaughter, such as the Igbo, for example, must keep well away from the latter’s tent. Boko Haram insurgents now ravaging swathes of territory across the north, northeast and northcentral and elsewhere in Nigeria are remarching along the paths first trodden by their parents/grandparents/greatgrandparents/Nigeriãna-génocidaires, beginning 29 May 1966, 50 years ago to the day.

As for Nigeria’s genocide-prosecuting ally Britain, again 50 years to the day, it has, alas, caught up with Biafra, via Brexit, to engage, critically, with exercising its right to self-determination – in this instance, to determine whether or not it wishes to be part of the supranational state called the European Union. Unlike the Biafrans, who, 50 years ago, exercised this same right but in staggeringly existential circumstances, Britain hasn’t sought Brexit from the European Union because it has been threatened or subjected to the crime of genocide by the latter. On the contrary. Similarly, the 5 million constituent Scottish people in Britain do not, 50 years after Biafra, currently seek to exercise their right to self-determination from Britain because they have been threatened or subjected to the crime of genocide by Britain. Not at all.

Just as the Biafrans, 50 years ago, the underlying awareness by the British, as a whole, collectively, or the Scots, separately, is that this right to self-determination is inalienable and its exercise by any people across the world is not dependent on prevailing circumstance(s).

* Herbert Ekwe-Ekwe is visiting professor in the graduate programme of constitutional law at Universidade de Fortaleza, Brazil. He specialises on the state and on genocide and wars in Africa in the post-1966 epoch, beginning with the Igbo genocide, 29 May 1966-12 January 1970, the foundational and most gruesome genocide of post-(European)conquest Africa. Among his books are Longest genocide - since 29 May 1966 (forthcoming, 2016), Readings from Reading: Essays on African Politics, Genocide, Literature (African Renaissance, 2011), Biafra Revisited (African Renaissance, 2006), African Literature in Defence of History: An Essay on Chinua Achebe (Michigan State University Press, 2001), Africa 2001: The State, Human Rights and the People (International Institute for African Research, 1993), and Conflict and Intervention in Africa (Macmillan, 1990).