Home » Economics » How ‘classy’ is the African middle class?

How ‘classy’ is the African middle class? 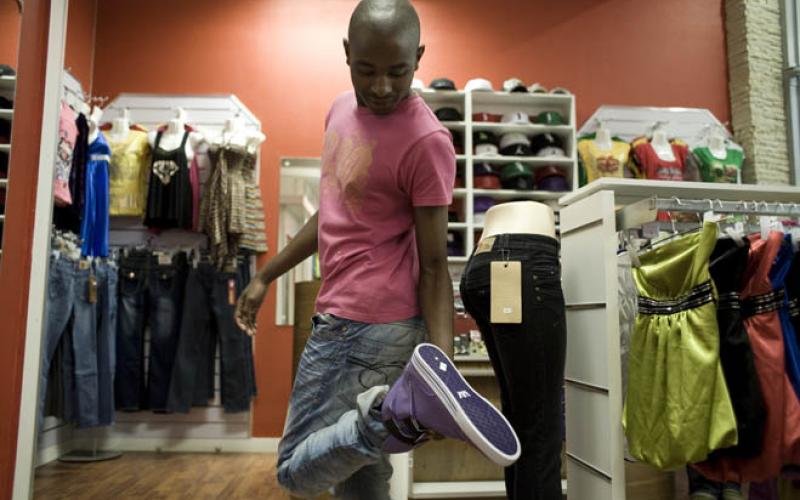 It is dubious that African middle classes by their sheer existence promote economic growth. Their increase was mainly a limited result of the trickle down effects of the resource based economic growth rates during the early years of this century. Their position and role in society has hardly economic potential and dynamics inducing further productive investment contributing towards sustainable economic growth.

The middle classes in the global South gained growing attention since the turn of the century mainly through their rapid ascendancy in the Asian emerging economies. One of the side effects of the economic growth during these ‘fat years’, which also benefited the resource rich economies on the African continent, was a rapid relative increase of monetary income for a growing number of households. Many of these in the lower segments of society crossed the defined poverty levels of $1.25 a day. The ominous term ‘middle class’ was part of the effort to quantify this trend and at the same time to classify it.

The concept advocated by this new discourse remained, however, vague and limited to number crunching. The minimum threshold for entering a so-called middle class in monetary terms was critically vulnerable to a setback into impoverishment. After all, one sixth of the world’s population has to make a living with two to three dollars a day. This is a degree of existential insecurity, which motivated Raphael Kaplinsky in his keynote delivered at the General Conference of the European Association of Development Research and Training Institutes (EADI) in June 2014 to make the observation that these days everyone not starving is considered to be middle class.

What is ‘the middle’ in Africa’s middle class?

The African Development Bank (AfDB) played a defining role in promoting and transferring the middle class debate onto the continent. Using the two US$ benchmark, it declared some 300 million Africans (about a third of the continent’s population) as being middle class. A year later it expanded its guestimates to 300 to 500 million and declared them to be a key factor.

As problematic as such monetary acrobatics remain the analytical deficit, which characterizes such purely numerical classification. The so-called middle class appears to be a ‘muddling class’. Rigorously explored differentiations remained largely absent – not to mention any substantial class analysis. Professional activities, social status, cultural, ethnic or religious affinities or lifestyle as well as political orientations were in the original discourse hardly (if at all) considered. But all these attributes do matter, if one wants to properly define a middle class as an array of collective identities (once also including reference to class consciousness), whose bearers act in a political and economical way.

More recently, the debate has finally arrived in African Studies too, where scholars have undertaken more serious efforts to claim ownership over what has initially been a discussion imposed by economists from the outside. They offer much more nuanced assessments from the point of view of social anthropology, sociology, political science and economics. This claim to ownership is also reflected in edited, inter-disciplinary volumes both in English and in German.  The compilations show how African Studies have advanced as regards the need for a more profound engagement with the African middle class and the need to deconstruct the mystification of such segments being declared as the torchbearers of progress and development. As alerted in a paper by UNU-WIDER, a new middle class as meaningful social actor does require a collective identity in pursuance of common interests. Once upon a time this was called class-consciousness, based on a class in itself while acting as a class for itself.

Politics, development and the middle class

Politically such middle classes seem not as democratic as many of those singing its praise song assume. While middle classes elsewhere have shown ambiguities ranging from politically progressive engagement to a status quo oriented, conservative approach to policies (if being political at all), this is not different when having a closer look at African realities. In South Africa, the only consistency of the Black middle class in historical perspective is its political inconsistency, as Roger Southall suggested. They are no more likely to hold democratic values than other Black South Africans, but are more likely to want government to secure higher order, rather than basic, survival needs if one trusts the results of an Afrobarometer survey.

It is also dubious that African middle classes by their sheer existence promote economic growth. Their increase was mainly a limited result of the trickle down effects of the resource based economic growth rates during the early years of this century. Their position and role in society has hardly economic potential and dynamics inducing further productive investment contributing towards sustainable economic growth. There is little evidence of any correlation between economic growth and social progress, as even a working paper of the IMF admits. While during the ‘fat years’ the poor partly became a little bit less poor, the rich got much richer. Even the AfDB admits that the income discrepancies as measured by the Gini-coefficient have increased, while six among the ten most unequal countries in the world remain in Africa.

That a sensible political economy analysis needs to differentiate between the rich with political leverage and the rest was even conceded by Nancy Birdsall who is among the most influential and persistent advocates of the support of a middle class rather than a pro-poor developmental orientation. She remains adamant that the middle class is an ingredient for good governance. This is based on her assumption that economic growth continues and inequalities will be reduced, that a growing middle class has a greater interest in accountable government and is willing to support a social contract, which taxes them as an investment into collective public goods to the benefit also of the poor. Dream on!

Caught in the middle?

Meanwhile it is necessary to put the record straight and lift the ideological haze. Already the UNDP’s Human Development Report of 2013, which promoted the middle class hype, predicted that 80 per cent of middle classes would in 2030 come from the global South, but only two per cent from Sub-Saharan Africa. Recent assessments claim that it is not the middle of African societies which expands, but the lower and higher social groups. According to a report by the Pew Research Centre only a few African countries had a meaningful increase of those in the middle-income category.

Multinationals in the retail and consumption sector have already reacted to the dwindling purchasing power of the middle class by reducing investments. Nestle has downscaled its presence in Africa by 15 per cent of its employees. And a report in The Economist, which earlier shifted its doomsday visions of a ‘Hopeless Continent’ towards ‘Africa Rising’ and ‘Continent of Hope’, concluded end of October 2015 that Africans as a worrying trend are mainly rich or poor but not middle class.

Fortunately, the debate has now created sufficient awareness within the scholarly community to explore fact and fiction of the assumed transformative power of a middle class. This also includes the need to sensitize towards ideological smokescreens close to the neoliberal paradigm, which try to make us believe that a middle class is the cure. In reality, little has changed as regards leverage and control over social and political affairs. José Gabriel Palma had already summed up what really matters: ‘It’s the share of the rich, stupid!’

Despite such conclusion, however, the current engagement with the African middle class phenomenon is anything but obsolete. Independent of their size, its members signify modified social relations, which deserve attention and analysis – with the emphasis on the latter. Göran Therborn stresses that discourse on class – whether right or wrong – is always of social relevance. The boom of the middle class debate is therefore a remarkable symptom of our decade. Social class will remain also in the future a category of central importance.

* Henning Melber is a Senior Research Associate with the Nordic Africa Institute and Director emeritus of the Dag Hammarskjöld Foundation, both in Uppsala/Sweden. He is an Extraordinary Professor at the Department of Political Sciences, University of Pretoria and the Centre for Africa Studies, University of the Free State in Bloemfontein, and a Senior Research Fellow with the Institute for Commonwealth Studies/School for Advanced Study at London University. He is editor of The Rise of Africa’s Middle Class: Myth, Realities and Critical Engagements (London: Zed 2016).