Russia and Angola stuck between diplomatic rhetoric and business reality 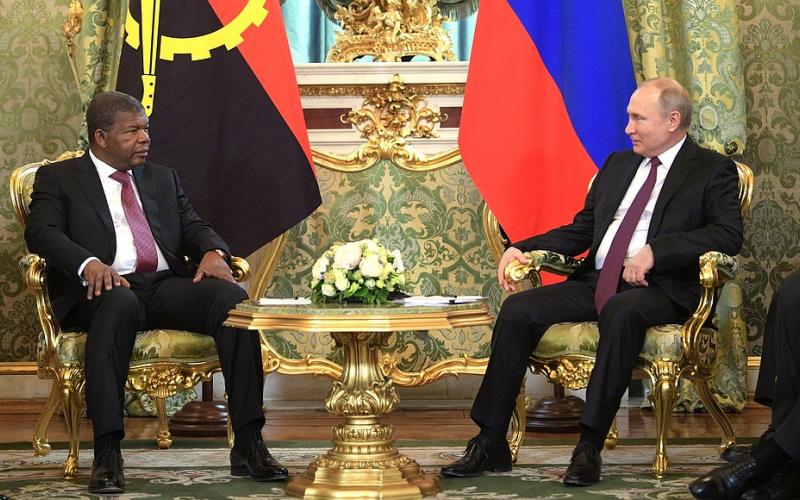 Strengthening cooperation in trade, economy and culture, as well as current international and regional matters were top issues in talks between President Vladimir Putin of Russia and President João Lourenço of Angola at the Kremlin on 4 April.

Striking a personal note, the Angolan leader, who completed his education in 1982 in Moscow, said: “Moscow then and now are two different cities. My congratulations – you have ensured progress and development for Russia and the Russian people.”

The two leaders not only signed a joint communiqué, but also a number of bilateral documents during the official visit that kicked off on 2 April. These included intergovernmental agreements on the peaceful exploration and use of space and on fishery and aquaculture as well as documents on cooperation in diamond mining and processing.

“Angola is a reliable and old partner. We need to consider what we need to do, without delay, to stimulate our trade and economic ties. There are interesting fields of activity, such as the diamond industry, fisheries and space exploration. There are also cultural spheres, such as education and the training of personnel,” Putin told the Angolan President.

On his part, the Angolan leader João Lourenço added: “We have come to Russia on an official visit to strengthen our ties and cooperation and, if possible, to promote interaction between our countries. Russia is doing splendidly in the spheres of mineral resources, education, healthcare and defence. But we would like to know about Russia’s potential in other fields so we can promote cooperation in these areas of the Angolan economy.”

He informed further that his opening speech earlier at the Angola-Russia Forum in Moscow was designed to attract the interest of Russian business people to invest in the Angolan economy, and finally added “many countries are doing this, and we are confident that Russia can help with economic diversification.”

Consultations continue on draft agreements on cooperation in the peaceful use of outer space and nuclear energy, commercial shipping, mutual protection of classified information, simplified access to Angola’s ports for Russian warships, as well as agreements involving Russia’s Justice Ministry, Ministry of Industry and Trade and Communications Ministry, according to the Kremlin Press Service.

Before their final departure from the Kremlin, João Lourenço presented Vladimir Putin with a high Angolan award – the Order of Agostinho Neto, the first President of Angola – as a sign of gratitude for several years of support for the Republic of Angola.

The Agostinho Neto Order is the highest distinction of the Angolan State with a single degree, granted to nationals and foreigners, in particular heads of state and government, political leaders and other heavyweight individuals.

Earlier at the Angolan-Russian Forum, the Angolan leader said that political and diplomatic relations with Russia were “excellent and privileged” but asked for more Russian private investment.

In his objective assessment about economic engagement by foreign players, only a few Russian companies are operating in the Angolan market and their activity is limited solely to the exploration and production of diamonds, to the financial system and to the construction of hydroelectric dams, the Angolan President said.

“Angola wants to change that scenario through public-private partnerships or by creating Angolan-Russian companies with a focus on the manufacturing industry, agro-industry, fishing, energy, tourism, geology and mining, among other sectors,” he added.

Lourenço, however, recalled the long-lasting tradition of “friendship and solidarity” between the two countries, which has remained firm and strong despite the great changes the world has seen in the last decades. Angola counts with Russia’s solidarity and support at a time when it must guarantee economic cooperation and sustainable development, the president said.

Commenting Russia-Angolan interaction, Sergei Nenashev, who served as Russia’s Ambassador to Angola from 2007 to 2012, said: “Angola is a priority area of Russia’s cooperation in Africa. To begin with, that was the case since the time when Angola fought for its independence. Secondly, this is due to Angola’s huge economic potential.”

The former ambassador told the Kommersant daily newspaper: “Now the country lives off oil, gas and, partially, diamonds. On the other hand, Angola has vast resources. Today, Russia and Angola maintain ties in all areas of interstate relations, including culture, education, personnel training, military-technical, financial and economic cooperation.”

Russians like historical references. As expected, the local Russian media were awash with articles highlighting Russia’s historical contributions to the independence of Angola, the development and strengthening of friendly relations with the country during the Soviet era, and that Russia has promoted political dialogue, including the exchange of visits at the high levels, as well as trade and economic cooperation and cultural relations between the two countries.

Media reports offered a number of examples of many areas of cooperation. Russian companies have, at least over the past ten years, made only a marginal impact on development of the country. Alrosa is involved in diamond mining in Angola’s largest Catoka deposit. Global Resources is involved in geological prospecting. Rosneft has won a tender for working in Angola. Russian and Angolan companies are cooperating on high technology.

But, professors Vladimir Shubin and Alexandra Archangelskaya from the Russian Academy of Sciences’ Institute for African Studies, have argued that “both Russia and Angola still need to be more strategic in aligning their interests, and more proactive in carving out efficient bilateral instruments and mechanisms in order to promote economic exchanges and reap the benefits of a fully-fledged partnership.”

Angola has diamonds, oil, gold, copper and a rich wildlife, forest and fossil fuels. Since independence, oil and diamonds have been the most important economic resource. It is a member of the Southern African Development Community, an inter-governmental organisation that has made its goal to further socio-economic cooperation and integration as well as political and security cooperation among 16 Southern African states.

The Republic of Angola is a country in south-central Africa, the seventh largest by territorial size and bordered by Namibia to the south, Democratic Republic of Congo to the north and Zambia to the east, and on the west the South Atlantic Ocean, making it strategically located.