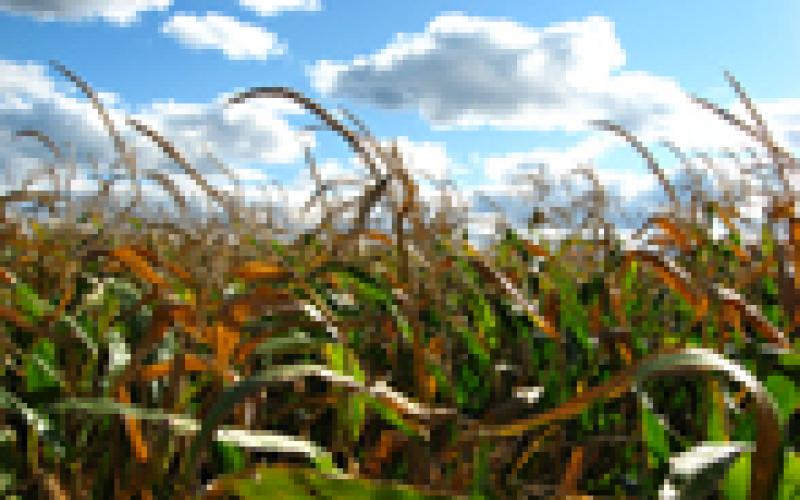 ‘Under the guise of developing "climate-ready" crops, the world’s largest seed and agrochemical corporations are pressuring governments to allow what could become the broadest and most dangerous patent claims in intellectual property history.’ Hope Shand unpacks the findings of ETC Group’s new report into patent claims on ‘genes, plants and technologies that will supposedly allow biotech crops to tolerate drought and other environmental stresses'.

Under the guise of developing ‘climate-ready’ crops, the world’s largest seed and agrochemical corporations are pressuring governments to allow what could become the broadest and most dangerous patent claims in intellectual property history. A new report by ETC Group[1] reveals a dramatic upsurge in the number of patent claims on ‘climate-ready’ genes, plants and technologies that will supposedly allow biotech crops to tolerate drought and other environmental stresses (i.e. abiotic stresses) associated with climate change. The patent grab threatens to put a monopoly choke-hold on the world’s biomass and our future food supply, warns ETC Group. In many cases, a single patent or patent application claims ownership of engineered gene sequences that could be deployed in virtually all major crops – as well as the processed food and feed products derived from them.

The patent grab on ‘climate-ready’ crops is a bid to control not only the world’s food security but also the world’s yet-to-be commodified biomass. In the fog of climate chaos, the ‘Gene Giants’ hope to ease public acceptance of genetically engineered crops and make the patent grab more palatable. It’s a fresh twist on a stale theme: Crops engineered with ‘climate-ready’ genes will increase production and feed the world, we’re told. Plants that are engineered to grow on poor soils, with less rain and less fertiliser will mean the difference between starvation and survival for the poorest farmers.

To gain moral legitimacy, the Gene Giants are teaming up with high-profile philanthro-capitalists (Gates and Buffett Foundations), big governments like the USA and UK and big-box breeders (Consultative Group on International Agricultural Research) to donate royalty-free genes and technologies to resource-poor farmers – especially in sub Saharan Africa. The quid pro quo is that African governments must ‘ease the regulatory burden’ that might hinder the commercial release of transgenic crops and embrace biotech-friendly intellectual property laws.

ETC Group’s report identifies 262 patent families (subsuming 1663 patent documents worldwide) published between June 2008 and June 2010 that make specific claims to abiotic stress tolerance (such as drought, heat, flood, cold and salt-tolerance) in plants. Just six corporations (DuPont, BASF, Monsanto, Syngenta, Bayer and Dow) and their biotech partners (Mendel Biotechnology and Evogene) control 201 or 77 per cent of the 262 patent families (both issued patents and applications). Three companies – DuPont, BASF, Monsanto – account for 173 or 66 per cent. The public sector has only 9 per cent. A detailed list of the patent documents is http://www.pambazuka.org/images/articles/504/climatereadypatents.jpg

The patent grab on climate ready crops is not limited to food and feed crops – the major players also support research related to biofuels and industrial feedstocks (i.e. biomass).

In 2007 BASF and Monsanto initiated the world’s largest agricultural research collaboration, jointly investing US$1.5 billion to develop stress-tolerant maize (corn), soybean, cotton and canola crops. In July 2010 BASF and Monsanto announced an additional investment of US$1 billion – which now extends to abiotic stress tolerance in wheat – the world’s second most valuable crop commodity after maize. Monsanto and BASF claim that the world’s first-ever genetically engineered, drought-tolerant maize variety will be the first product to emerge from their joint pipeline – scheduled for commercial release around 2012. Monsanto also is engineering drought tolerant cotton, wheat and sugar cane.

Mendel Biotechnology, collaborating with Monsanto since 1997, is a major player in climate-ready crop genes. Monsanto has exclusive royalty-bearing licenses to Mendel technology in certain crops and vegetables. Mendel also partners with BP and Bayer. Since 2007, Mendel has been working with BP on second-generation biofuels.

DuPont (Pioneer Hi-Bred) refers to its work on drought tolerance technologies as ‘the next great wave of agricultural innovation.’ Pioneer focuses on both conventional breeding as well as transgenics. Pioneer also collaborates with Israeli biotech company, Evogene, on maize and soybean drought stress and with Arcadia Biosciences.[4] In August 2010 Evogene revealed its ‘Athlete 3.0’ – a proprietary computational technology for ‘cross-species discovery of genes, based on genomic data of over 130 plant species.’[5] The company claims it holds over 1,500 novel genes for key plant traits.

Arcadia Biosciences (Davis, California), founded in 2002, is collaborating with some of the world’s largest seed companies to develop genetically engineered, stress-tolerant crops. Although Arcadia is privately held, BASF’s venture capital fund has invested in the company since 2005. In 2009, Arcadia entered a partnership with Vilmorin (world’s fourth largest seed company, owned by Groupe Limagrain) for the development of nitrogen use efficient wheat. Arcadia has agreements with Monsanto, DuPont, Vilmorin, Advanta (India) and the US Agency for International Development (USAID) on projects related to nitrogen use efficiency, drought and salinity tolerance.

Syngenta unveiled its first generation drought-tolerant maize (‘water optimized hybrids’) in July 2010 – the result of conventional breeding (non-transgenic). According to Syngenta, the product offers the ‘potential to deliver 15% yield preservation under drought stress.’ Syngenta predicts that its second-generation maize hybrids – genetically engineered for drought tolerance – will be available post-2015.

MULTI-GENOME PATENT CLAIMS… AND BEYOND

Many patent claims related to climate-ready DNA are sweeping in scope. Most of the Gene Giants are staking claims on key nucleotide sequences – trying to convince patent examiners that the same bits of DNA identified in one plant are responsible for endowing similar traits across other plant genomes (known as homologous DNA). Because of the similarity in DNA sequences between individuals of the same species or among different species – ‘homologous sequences’ – the companies seek monopoly protection that extends not just to stress tolerance in a single engineered plant species, but also to a substantially similar genetic sequence in virtually all transformed plants. Armed with genomic information, Gene Giants are making claims across species, genera and classes.

The patent grab on key gene sequences in the world’s major crops is neither trivial nor theoretical. A decade ago, genomic companies and Gene Giants were routinely filing ‘bulk’ claims on huge numbers of DNA and amino acid (i.e. protein) sequences – over 100,000 in some cases – without specific knowledge of their function.

In 2002, rice (Oryza sativa) became the second plant genome to be published, and the first major crop genome to be fully sequenced; it quickly became the target of monopoly claims. In 2006, Cambia, an independent non-profit that promotes transparency in intellectual property, used its ‘Patent Lens’ project to conduct an in-depth analysis of US patents and patent applications that make claims on the rice genome. Patent Lens revealed that, by 2006, roughly 74 per cent of the rice genome (Oryza sativa) was named in the claims of US patent applications – due, in large part, to bulk sequence applications. They discovered that every segment of the rice genome’s 12 chromosomes was recited in patent applications – including many overlapping claims. Patent Lens’ remarkable visual display is available here.

Fortunately, Cambia’s 2006 analysis concluded that the corporate quest to win monopoly patents on molecular-level chunks of the world’s most important food crop had only partially succeeded – so far – and that most of the rice genome remains in the public domain. That’s due, in part, to recent decisions (by courts and patent offices) that attempt to restrict the number of DNA sequences claimed in a single patent application.

In 2001 and 2007 the US PTO put a brake on ‘bulk claims’ by issuing new rules requiring that claimed inventions must have ‘well-established’ utility, and then limiting the number of sequences claimed in each patent application. In July 2010, Europe’s highest court – the European Court of Justice (ECJ) of the EU – made a ruling that significantly restricts the reach of agricultural biotech patents on DNA sequences – and specifically reigns in the breadth of Monsanto’s monopoly on herbicide tolerant soybeans. The European Court affirmed that the purpose (function) of the DNA sequence must be disclosed in the patent, and protection of the sequence is limited to those situations in which the DNA is performing the function for which it was originally patented.

Recent rulings to restrict monopoly claims on DNA sequences are significant, and a major upset for Monsanto, but that hasn’t stopped the scramble for gene-based patents. In the words of one patent lawyer, ‘The challenge for patentees in this area will be to find alternative ways to protect these products.’[6]

Although some of the most egregious examples of sweeping patent claims identified by ETC Group are found in patent applications that have not yet been issued, there’s ample reason for concern. According to Patent Lens, applications alone may be used to scare off potential infringers, or used as leverage in licensing negotiations. The mere existence of the designation ‘patent pending’ is a powerful deterrent that may discourage others from using, making or selling a technology that is claimed in a patent application. The practice of over-reaching patent claims and unjust monopolies is far from over.

To gain desperately needed moral legitimacy, Gene Giants like Monsanto, BASF, Syngenta and DuPont are forging high-profile partnerships with public sector institutions that aim to deliver proprietary technologies to resource-poor farmers – especially in sub Saharan Africa. The public/private partnerships are hosted by a growing web of South-based non-profit institutions that exist primarily to facilitate and promote the introduction of genetically engineered crops. The immediate impact of these partnerships is to enhance the public image of Gene Giants that are donating royalty-free genes to needy farmers. But the longer-term goal is to create the ‘enabling environments’ (biosafety regulations, intellectual property laws, positive media coverage to promote public acceptance) that will support the market introduction of genetically engineered crops and related technologies. It’s a package deal – wrapped in a philanthropic façade – and it comes with strings attached.

The Nairobi-based is one of AATF’s five projects. The public/private partnership involves Monsanto; BASF; the CGIAR’s flagship research centre – the ’ (IMAS), a partnership that aims to increase maize yield’s in Africa by 30-50 per cent over currently available varieties – with the same amount of fertiliser. The project is led by CIMMYT, with US$19.5 million in grants from the , and the ETC Group. She writes on issues related to technology, development and diversity, and continues to work closely with ETC Group on special projects.