Somalia: A country devastated by drought, famine and conflict 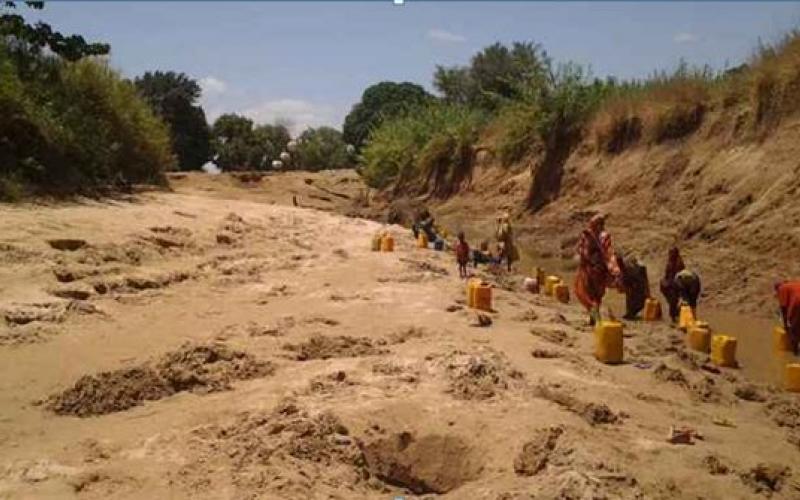 Somalia’s president has declared the famine ravaging the country a national disaster. There has been little response from the world.  Drought is a natural calamity that can happen anywhere, but what makes it more deadly in Somalia is the continued conflict that prevents relief aid from reaching the needy or makes it difficult for affected nomads to travel to other places to find help.

We often hear the platitude “water is precious” while we carry around bottles of water we can drink anytime. We bathe with it several times a day, wash our cars with it, flood our lawns and gardens with gallons of it, and waste it in every conceivable way. On rare occasions, when we wake up in the morning and we don’t find readily available water in the faucet we go crazy, frantic that we can’t brush our teeth, wash our faces, or flush our toilets for a single morning. Now, imagine, just a sip, stands between you and death, and there isn’t any to be found.

This is exactly what is happening now in Somalia where according to the United Nations more than 6.2 million people face famine and starvation due to food insecurity caused by poor rainfall and lack of clean water. “Somalia is in the grip of an intense drought, induced by two consecutive seasons of poor rainfall. In the worst-affected areas, inadequate rainfall and lack of water has wiped out crops and killed livestock, while communities are being forced to sell their assets, and borrow food and money to survive,” says the report.

In a country where more than 48 per cent of the population are nomads and farmers in rural areas, rain is a life giver. No wonder that Somalis measure prosperity by ‘Biyo iyo Baad’ (water and green pasture). And when there is a shortage of rain for more than two consecutive years, as preceded the current situation, the result is famine, starvation, and even the death of people and livestock. It was in 2010-2011 when the country was hit by its last, and one of the most devastating droughts in its history, which developed into a famine that killed approximately 258,000 according to the UN and its agencies. And presently Unicef lists Somalia as one of the countries of heightened concern where acute malnutrition could kill tens of thousands of children if a quick international response does not arrive.

Large numbers of people have already been uprooted from their nomadic areas and moved to either urban places or other rural areas less affected by the dry conditions. The worst hit areas are in the eastern regions of the otherwise peaceful and self-declared state of Somaliland and the northern and central regions of Somalia proper. The people have lost all their livestock which is also the main income earner of the country, contributing 40 per cent of the country’s GDP. In 2015 alone Somalia exported 5.3 million heads of livestock to Middle Eastern markets, according to the Food and Agriculture Organisation (FAO). This explains why drought puts not only the pastoral life of people at risk but also hinders the economic recovery of the country which is already hampered by a civil war and other major geopolitical, socioeconomic and ecological challenges.

Droughts are natural calamities that can happen anywhere due to environmental changes but what makes it more deadly in Somalia than other places is the continued conflict that denies relief aid to reach the needy or makes it difficult for affected nomads to travel from drought affected areas to other places where they could find help and succour, bringing the Somalis face to face with one of their traditional nightmares, ‘Col iyo Abaar’ (war and conflict). The conflict also defeats the country’s capacity for resilience and resistance to future droughts.

This was emphasised by the new UN Secretary-General during his recent visit to Somalia. “We have witnessed the deadly combination of conflict, of hunger and of disease, caused by the continued struggle of Somalia to be able to defeat Al Shabaab, to end terrorism and to create conditions for peace to be re-established, but with drought that has had a devastating impact in the economy and in the lives of the Somalis. And in these tragic circumstances, the rapid spread of diarrhoea and cholera killing people, making people suffer enormously, with a clear need of support from the international community,” Antonio Guterres said.

This drought, however, comes at a time of great hope for the Somali people with the election of a new president in early February. A president that the people hope will lead the country to peace and stability and restore the nation’s respected position in the international community. A hope that after 25 years of war and lawlessness Somalis may finally look forward to an era of ‘nabad iyo caano’ (peace and milk). The president has since then declared a state of national disaster and appealed to the international community for an urgent response in order to avoid a humanitarian tragedy.

But while the Somali people live between hope and desperation in these difficult times, it seems the international community is too slow to act, or, one might say, even inconsiderate to the suffering of their fellow human beings in Somalia. We have seen how the world looked the other way during previous humanitarian crisis in Africa. It happened in Ethiopia during the famine of 1983-84 when the world was too sluggish to come to the rescue of a whole country ravaged by drought and famine until TV pictures shocked the world. Again the world failed to respond quickly to Somalia’s devastating conflict-engendered famine in 2010-2011 until Recep Tayyip Erdogan, Turkish Prime Minister at the time, and his wife landed in Mogadishu to become the first world leader to visit Somalia.

It would be unfair to blame the international community for the famine that strikes Somalia when the famine itself, and not the drought, is a result of the ongoing conflict between the extremist Al Shabab fighters and the successive Somali governments ensconced in Mogadishu under the protection of African peacekeeping forces. But it is unbecoming of the international community to ignore the plight of the helpless nomads and rural farmers, particularly as developed countries and the UN in particular have access to sophisticated early warning systems that identify the risk of drought and famine. They have the moral responsibility to mobilise preventive and mitigation measures before the actual disaster strikes.

The international community should do more than callously wait for the media to offer up graphic images of large scale mortality, massive population displacement, and arid lands littered with animal carcasses and skeletal children to our television screens before responding to such a tragedy.

Failing to help Somalia imperils world peace and security as extremist groups like Al Shabab, who already keep the population hostage, will use the suffering of the people to their advantage by attracting more of the hapless and unemployed youth to join their ranks, particularly as the western nations shut their gates to immigration due to rising Islamophobia and fear mongering.

* Bashir Goth is an African commentator on political, social and cultural issues. This article first appeared in Gulf News.