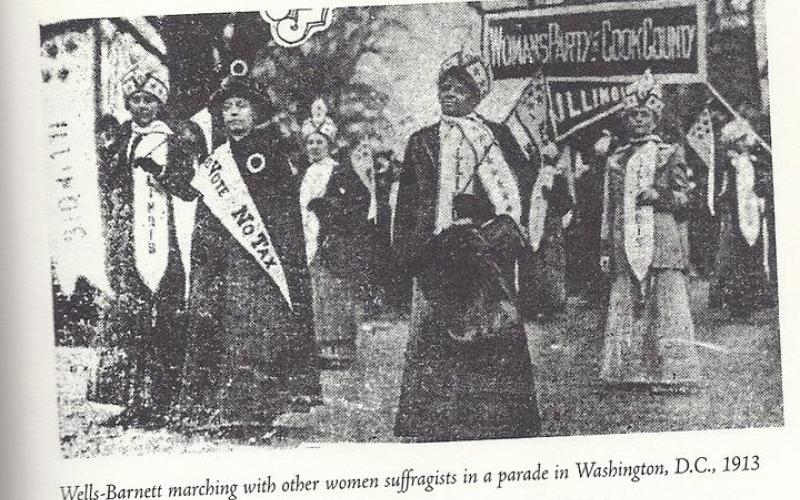 From the antebellum period through the Civil War and Jim Crow the issues of gender and race were interwoven.

A cursory re-examination of the early years of what became known as the women’s suffrage movement and abolitionism represented the embryonic phases of self-organisation and mass struggle politics within United States society.

As we pointed out in an earlier essay, the campaigns aimed at winning the right of women to exercise the franchise emerged directly from the demands for the outlawing of African enslavement.

William Lloyd Garrison as leader of the American Anti-slavery Society provided an opportunity for both free African men and women to enhance their avenues of expression in work related to the achievement of ending involuntary servitude. The Philadelphia Female Anti-slavery Society and its national component of the Anti-slavery Convention of American Women during the 1830s attracted people of both African and European descent creating the conditions for the early calls for full equality eventually leading to the demands for universal suffrage.

None of these efforts would have been possible absent of the flight and rebellion taking place among the enslaved African people. By the early 19th century concerns about the untenable nature of the Atlantic Slave Trade and its containment of the impacted populations created the material basis for the stiffening of repressive measures aimed at controlling the African people residing in the United States.

Although there was a gradual reversal of the legalisation of slavery and the limited enfranchisement of African people in the Northeastern states after the War of Independence from Britain, the rapid expansion of slave labour production occurred during the opening decades of the 19th century after the invention of the cotton gin in 1793, prompting the large-scale European settlement of South. Rebellions and rumours of unrest in Richmond (Virginia) in 1800, Charleston (South Carolina) 1822 and the South Hampton County (Virginia) uprising led by Nat Turner in 1831, fuelled the notions of the potential for a collapse of the slave system through violent upheaval.

The Haitian Revolution from 1791 to 1804 and the founding of the Black Republic born in the military defeat of French empire on Hispaniola Island actually worsened the conditions for enslaved Africans on the plantations of the South during subsequent decades. By the 1830s and 1840s the demand for cotton continued to rise in order to supply the textile industries of the North and in England.

Seneca Falls, women’s suffrage and the intervention of Frederick Douglass

Organisers of the Seneca Falls, New York 19-20 July 1848 convention through writings and speeches have placed this event as the genesis of women’s suffrage claims. However, these demands had been raised before in other fora including the Liberty Party platforms earlier in the same year (14-15 June) by presidential candidate Gerrit Smith and within the work of previously organised female societies opposed to slavery. Ernestine Rose delivered addresses as early as 1846 in support of abolition and universal suffrage. [[i]]

Many of the concerns, which were initially addressed at Seneca Falls were related to the right of property ownership, inheritance and marital status. Even leading women activists were unsure about the timeliness of demands for universal suffrage.

In fact it was Frederick Douglass, the publisher of the North Star, a leading abolitionist, who spoke to the delegates on the second day of the Convention urging the gathering to pass a resolution calling for the right of women to vote. Douglass, said to have been the only Black person and one of very few men in attendance, rose militantly to pronounce: “If there is any argument to be made, it must be made by opponents, not by the friends of woman suffrage. Let those who want argument examine the ground upon which they base their claim to the right to vote. They will find that there is not one reason, not one consideration, which they can urge in support of man’s claim to vote, which does not equally support the right of woman to vote.”[[ii]]

Yet Maria Stewart of Boston had written and spoken publically as early as 1831 on the need to end African enslavement as well as advocating equality for women. Stewart published in the Liberator newspaper initiated by Garrison, and beginning in 1832, delivered at least four lectures on the horrors of slavery along with the need for women’s emancipation. It is important to acknowledge that Stewart is often referred to as the first woman to speak in public settings where audiences were composed of diverse genders.

Speculation is that Stewart spoke within the same mode as other 19th century African women preachers such as Jarena Lee and Julia Foote. Lee preached after much struggle and opposition in the African Methodist Episcopal Church founded by Richard and Sara Allen in 1794 in Philadelphia. Foote was ordained as the first woman deacon in the African Methodist Zion Church and would later become a well-known evangelist associated with the spiritualist tradition, which reached fruition in the early 20th century.

The Women History Blog notes that: “Maria Stewart’s essays and speeches presented original ideas that were to become central to the struggles for African American freedom, human rights and women’s rights. In this she was a clear forerunner to Frederick Douglass, Sojourner Truth and generations of the most influential African American activists and political thinkers. Many of her ideas were so far ahead of their time that they remain relevant more than 180 years later.”[[iii]]

Another notable personality of the era was born into slavery in the early 1820s in Dorchester County, Maryland. Harriet Tubman ran away from her master to become a leader in the Underground Railroad. She liberated many Africans from bondage and would later serve as a member of the Union Army in the Civil War where she provided intelligence on the locations of plantations.

Divisions intensify after the Civil War

Tubman later worked with Elizabeth Cady Stanton and Susan B. Anthony after the Civil War in efforts aimed at acquiring women’s suffrage. These efforts linking African emancipation and women’s rights would be strained over events surrounding the enactment of 14th and 15th Amendments to the Constitution.

A leading section of the women’s movement led by Stanton and Anthony opposed the passage and ratification of the 15th Amendment, which was purportedly drafted to guarantee the right to the franchise for African American males formerly enslaved in the Confederate states. This disagreement prompted the split within the American Equal Rights Association (AERA) founded in 1866 with the stated purpose of winning civil rights for African Americans and women of all races. The AERA would collapse by 1870 resulting in the advent of two rival women’s suffrage organisations.

Even Douglass’ alliance with Stanton and Anthony would be strained during this period as one historical source describes how: “After only three years, the AERA dissolved over heated fights about whether to support the 15th Amendment, with which Black men won the right to vote (in the South, this victory would be short-lived). At a pivotal convention in May 1869, Douglass argued that the AERA should support the amendment while continuing to fight for women’s suffrage. Stanton not only disagreed, she gave an address filled with racist stereotypes about the male immigrants and male former slaves whom the amendment would enfranchise.”[[iv]]

This fragile victory gained through the passage of the 15th Amendment would be liquidated through the withdrawal of federal troops from the former Confederate states, the passage of Jim Crow legislation by southern state governments instituting peonage for African American farmers and the widespread usage of racial terror by white supremacist groups such as the Ku Klux Klan.  Lynch law became the order of the closing decades of the 19th century.

Ida B. Wells-Barnett, an educator, journalist and political organiser was driven out of Memphis after her militant opposition to the 1892 triple lynching of three African American men by leading white officials and businessmen in the city. Launching an international campaign against racist mob violence and state approved repression, Wells-Barnett would also become a leading force in the African American women’s club movement of 1890s and early 1900s.

After relocating in Chicago, Wells-Barnett was a key figure in the struggle for full political rights through the founding of the Alpha Suffrage Club in 1913. Despite here valiant efforts, members of the renewed white-dominated women’s movement sought to segregate her along with dozens of other African Americans at a demonstration for voting rights in Washington, DC.

An account of this episode says: “In March 1913, Wells-Barnett travelled to the first suffrage parade in Washington DC, an event organised by the National American Woman Suffrage Association. On the day of the parade, Wells-Barnett and sixty other Black women arrived to march with the Illinois delegation, but were immediately advised, as women of colour, to march in the back, so as not to upset the Southern delegates. Wells-Barnett refused, arguing: ‘Either I go with you or not at all. I am not taking this stand because I personally wish for recognition. I am doing it for the future benefit of my whole race.’ She initially left the scene, therefore convincing the crowd that she was complying with the request. However, she quickly returned and marched alongside her own Illinois delegation, supported by her white co-suffragists Belle Squires and Virginia Brooks. This event received massive newspaper coverage and shed light on the reality for African-American participation in politics.”[[v]]

Over a century later these unresolved contradictions remain a serious impediment to inter-racial political unity aimed at the realisation of full equality and self-determination for women and the oppressed nations in the United States. Gaining the right to the franchise through the 15th (1870) and 19th Amendments (1920) was the result of decades of tireless work and sacrifice.

During the mid-20th century, the passage of the 1964 Civil Rights Act prohibiting discrimination based on race, religion, gender and national origins was the direct outgrowth of mass initiatives and legal challenges. The following year, the 1965 Voting Rights Act empowered the federal government once again to exercise its authority to guarantee universal suffrage. Moreover, the international pressures from the world socialist movement and the national liberation struggles were an important element in the transformation of the superstructure of United States political culture.

Nevertheless, the existence of these civil rights cannot be guaranteed under a capitalist system, which is committed to the reversal of every gain won by popular movements. This historical reality requires the building of independent revolutionary organisations based within the working class and the masses of oppressed peoples.

The acquisition of sustainable guarantees for democratic rights and self-determination cannot be secured by the two existing ruling class oriented political parties. A party of the working class and nationally oppressed must come into existence which can speak in the name of those who have been the victims of the centuries-long class domination and economic exploitation.