Home » Global South » A century after the Bolshevik Revolution: We need a new spectre to haunt the world

A century after the Bolshevik Revolution: We need a new spectre to haunt the world 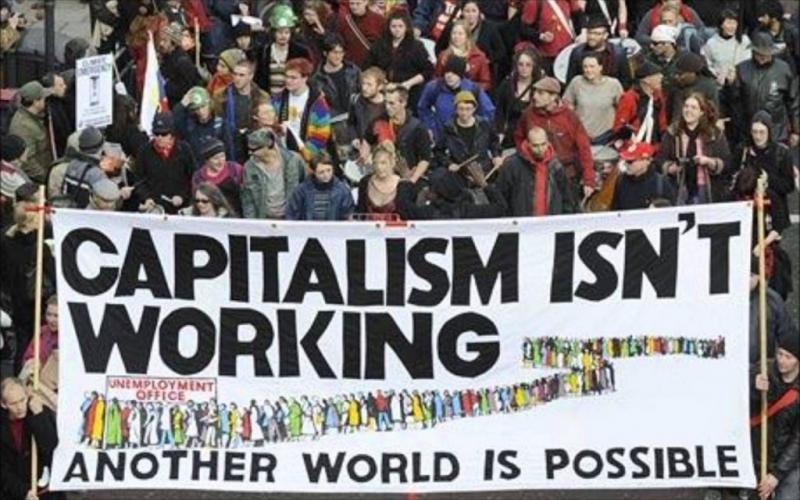 Perhaps the recent passing of Fidel Castro Ruz—leader of a process that best incarnated the emancipatory utopias in the region—highlights the absence of a theory capable of transforming the present into a more noble reality. Decades ago, it was common to witness exchanges between the Commander of the Cuban Revolution and numerous delegations of countries that belonged to what we then called the Third World. Today, social movements meet in the Vatican to nourish themselves with the only humanist discourse that is still current.

As a consequence, it is an imperious necessity to go back to learn from the praxis of the peoples that once formed the Non-Aligned Movement, and earlier this century created the movements that gathered in places like the Porto Alegre Social Forum. Our challenge is categorizing and systematizing the knowledge that emerges from their struggles.

One of the contemporary currents of critical thought that emerged from the peripheral world—after the so-called de-colonial turn, led, among others, by Argentine philosopher Enrique Dussel—is the Epistemology of the South (where ‘South’ is a geo-cultural metaphor that refers to every place that is oppressed and plundered by capitalism). The main promoter of this epistemological current is Portuguese scholar and social militant Boaventura de Sousa Santos. This current questions the hegemonic concept of “development”, which motorizes the myth of the limitless progress of the productive forces.

The Epistemology of the South makes several contributions to counter-hegemonic theory, including a respectful criticism of classical Marxism’s self-perception as the universal ideology of the working class in Western modernity.

It also benevolently questions decolonial thought for its focus on the cultural plane at the expense of the economic plane. Sousa maintains that this is a scholarly approach, without emotional strength (“without teeth”, as he says).  And he steers away from the deconstructive approaches of Foucault and Derrida to favor the positive struggle. He also maintains that we have to analyze the continuities and ruptures with the colonial model of Europe and its posterior influence in America, because there are abysmal differences between the colonial forms of the 19th century, characterized by metropolitan enclaves, and the colonial sociability of the 21st century. Lastly, he describes three indispensable categories for the peripheral world: capitalism, colonialism and patriarchy (which entail an ontological degradation of social, racial and sexual nature).

This current proposes a “Sociology of the Absent” is necessary to analyze the elements that hegemonic thought leaves out, creating a universe of people that are excluded from human rights, or socially disappeared. And, on the other hand, it proposes a “Sociology of Emergences” to contribute to the restitution of rights to all human beings, and the coexistence between different experiences in an ecosystem of knowledge that finds balance between scientific thought and popular thought.

It is worth remembering that Gunter Rodolfo Kush, a sociologist specialized in America and defender of contextualized knowledge [pensamiento situado]) considered myths as the form of knowledge of non-scriptural peoples—which positivist social sciences have considered less than civilization by establishing that written word is the frontier between prehistory and history, dismissing knowledge that had been codified in other manners.

In these times, we can’t dismiss any source that can contribute to diversify the monoculture of thoughts.

The body of women was the first colonized territory, prior to the Spanish conquest

Sayak Valencia, who is a doctor in Feminist Philosophy, Theory and Criticism at the Complutense University of Madrid, coined the term gore capitalism for the particular way in which marginalized and vulnerable territories operate under late capitalism. The term comes from US cinema, where it denominates a subgenre of horror movies with graphic and visceral violence. In this form of capitalism, like in the movies, “bloodshed is explicit and unjustified, with a high amount of viscera and dismemberment, frequently mixed with economic precarization, organized crime, the binary construction of gender and the predatory use of bodies”.

This enables some people to transform their situations of vulnerability or precariousness and empower themselves, albeit in a perverse form of self-affirmation, where they turn to violent practices that are profitable under the logic of capital—or “gore practices”. Valencia calls this process of self-affirmation through gore practices “necro-empowerment”, which is related to a concept coined by Achille Mbembe (a brilliant theoretician of decolonial thought from Cameroon) concept of “necro-power”, or the ability to decide on the death of others and the power that emanates from it.

“Endriago subject”(1) is the term Valencia created to denominate the executor of the gore practices of the new capitalism, which combines four forces: lack of basic necessities due to their marginal economic position; excess due to hyper-consumerist desires fueled by the market; frustration due to the impossibility of satisfaction of those needs; and the glorification of violence due to the trivializing and justifying of these actions in media depictions. Set in motion by these four forces, endriago subjects make violence a form of production that enables them to accumulate enough capital to have presence in the international market. This is why Valencia affirms that gore capitalism is an inter-continental struggle of extreme post-colonialism. The endriago subject is a form of adaptation to the environment through deviated practices, which exploit the most aggressive forms of the ideas associated with masculinity and hyper-individualism to get hold of the three functions that the state usually monopolizes: the exploitation of resources, selling security as a commodity and the appropriation of bodies as workers or consumers.

According to Prof. Ester Kandel, yesterday and today democratic vindications are incomplete because they occur in the context of a capitalist system.

The women’s movement has carried out numerous struggles—which have grown in the last few years—against issues like domestic violence, human trafficking, sexual and reproductive rights, abortion, sexual harassment and workplace equality. These struggles visibilize many phenomenons that had been naturalized. Even though several government organisms took initiatives to address these problems there are many problems, difficulties and pains.

The former issue was studied in the Argentine province of Córdoba, which linked the increase in cancer and abortions with the Monsanto model.

In Monte Maíz, cancer and spontaneous abortions were three times more frequent than the national average. But the Minister of Science and Technology, Lino Barañao, defended Monsanto and its agrotoxics, claiming that “glyphosate is like water with salt (…) There are also cases of improper use and death with antibiotics, and nobody complains”

If colonialism is a core element of modernity, because the salvationist rhetoric of modernity is based on the oppressive and condemnatory logic of coloniality, then that oppressive logic (as Argentine semiologist Walter Mignolo said) produces an energy of unhappiness, mistrust, and disengagement among those who react against imperial violence.

Kimberlé Crenshaw, US academic specialized in critical theory of race, has coined the term intersectionality as an analytic concept that systematizes the inclusion of those who are marginalized from the social, cultural, political, economic and academic fields.

Thinking about the Global South without colonialist concepts

One of the most unknown and mythologized places in the peripheral world is the so-called “Black continent”. In fact, the colonialist intervention of Africa permeates all cultural manifestations. For example, the fictional story of Tarzan, created in the early 20th century by US writer Edgar Rice Burroughs (and later adapted to comics, cinema and TV) still influences the new generations. In the story, Lord Greystoke, the only child of Scottish aristocrats, was stranded in the African jungle in the late 19th century after a mutiny in the ship they were travelling in. John’s parents died when he was an infant and he was adopted by a pack of gorilla-like monkeys, who call him Tarzan, which means “white skin”. Tarzan develops great physical abilities, like jumping from trees, balancing from lianas and defending his family against any wild animal. In line with his noble heritage, he also possesses great intelligence. Of course, after a while he becomes the single defender of  the tribes he relates with, who are incapable of defending themselves without the involvement of the Western white man.

It goes without saying that, as the other side of the coin on this colonial mythology, the world has seen many contributions made by independentist struggles of the African continent during the second half of the 20th century. Patriots like Amílcar Cabral, from Guinea Bissau and Cape Verde, have been among the first to denounce the interrelation between colonialism, capitalism and racism. “We don’t simply fight to raise our flag on our countries or have a national hymn, we fight so that  insults don’t govern our countries, so that our peoples are not exploited by imperialists—not only those with white skin, we don’t want any kind of exploitation, not even by black people”.

As Portuguese academic Marían Paula Menese (CLACSO), our rich and complex reality doesn’t fit into any universalist theory, not even that of some currents of critical thought like the one that supported the failed Cuban struggle in Congo.

Antillan psychiatrist Frantz Fanon also contributed to the matter. In his essay “The Wretched of the Earth”, he writes about the difficult task of defending an Epistemic Justice “colonialism and imperialism have not paid their score when they withdraw their flags and their police forces from our territories. For centuries the capitalists have behaved in the underdeveloped world like nothing more than war criminals. Deportations, massacres, forced labor, and slavery have been the main methods used by capitalism to increase its wealth, its gold or diamond reserves, and to establish its power”.

In order to have this rich theoretical work not remain only in the realm of ideas, we prefer to think that decolonization must be simultaneous to world decolonization, because the epistemic genocide justifies the social genocide: the Belgian colonizers who forcibly disappeared people during the Algerian battle had already erased the hocicos negros from history long before disappearing their bodies.

Connecting the above ideas with our context, it is necessary to mention that Western positivist modernity has canonized the cardinal points future/past and center/periphery in order to present a false dichotomy between civilization/barbarie that benefits the global north. This was first conceived by the founding fathers that created our republics in the image of the European states, through the bloodshed of natives, creoles and Africans.

Of course, our native peoples have a different idea of time, which has nothing to do with the pragmatism of capitalism, expressed in phrases like “time is money”. The urban/rural dichotomy also has created tensions for centuries.

If something has been made clear in the current context in our continent it is the fact that emancipation of a single country is impossible—emancipation has to be regional.

In conclusion, conceiving ourselves as a diverse geo-cultural totality is still a pending task since the dissolution of the Anfictionic Congress of Panama convened in 1826 by the liberator Simón Bolívar.

The few advances made in this regard during the so-called “progressivist decade” of the early 2000s are today threatened by the ongoing conservative counter-offensive, in a moment in history where the ferocious rapacity of global capitalism doesn’t even acknowledge the sovereignty of nation states nor the most elemental democratic formalities.

It might be possible in the immediate future to stop those onslaughts by reestablish (and not depending on institutional superstructures) regional agreements between the grassroots that tend to create something akin to a Federation of Communes of Our America—a necessary condition to act and think together against the evils of colonialism, capitalism and patriarchy that affect us daily.

(1) The endriago is a mythological beast—a hybrid between a person, a hydra, a serpent with multiple heads and a dragon.

This article previously appeared in The Dawn, the international newsletter of popular struggles.