Home » Global South » Clinton or Trump: Who is better for Africa?

Clinton or Trump: Who is better for Africa? 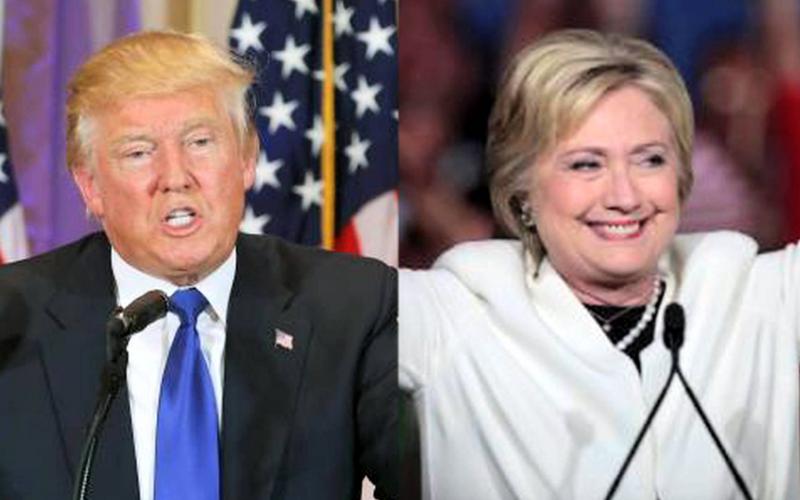 Clinton is part of the Establishment. It is part of her inheritance to provoke wars and control the world in league with global corporations. Nobody knows what lies behind Trump’s mask. May be he wants to “knock the shit” out of the Establishment. May be he is a “narcissist character” seeking reward in the short run. But no one who seriously cares about Africa’s liberation from Empire would support  Clinton.

Sometimes it helps to start an essay with a quote that sums up one’s position. Here is one from the English philosopher Bertrand Russell that defines my position: “A man without a bias cannot write interesting history – if indeed such a man exists.”[i] Indeed, no such person exists in the field of human sciences. So let me declare my bias upfront. I have no love for either Clinton or Trump, but as a “biased” African I’d rather have Trump than Clinton.

The American historian Carroll Quigley wrote a little known but brilliant book in 1949 titled The Anglo-American Establishment: From Rhodes to Cliveden.[ii] Quigley explains how men of the Empire like Cecil Rhodes, Alfred Milner, Lionel Curtis, Robert Brand and Adam Marris strategised to control the world; how they deliberately provoked wars – such as the Jameson Raid and the Boer War in South Africa leading to the British colonisation of South Africa. He also documented how they created the British Commonwealth of Nations, the Institute of Pacific Relations, and the US Council on Foreign Relations.

This is the “Establishment”.  Rhodes died in 1902, but the Anglo-American Establishment lives on and has mutated over time. Now it is represented by the global corporations that effectively control the world’s major resources (gold, diamonds, oil, etc.), banks including financial services, and the institutions of global governance (such as the IMF, the World Bank and the World Trade Organisation).

Clinton is part of the Establishment. It is part of her inheritance to provoke wars and control the system in league with global corporations. To date Clinton has raised a total of $446.4 million, and Trump of $137.3 million, of which Clinton has spent $349,6m and Trump $96.7m. Clinton’s money comes almost entirely from the Establishment whereas Trump’s largely from his own resources.[iii] Clinton is still refusing to release the transcripts of three paid speeches she gave in 2013 at a Goldman Sachs event. The speeches collectively netted her $675,000.[iv]

The Clintons are very close to Kissinger both in personal life and ideologically. They often spend vacations together. [v] But more than that Hillary regards Kissinger as her mentor, her Guru.

The person who defines Kissinger’s realpolitik ideology best is Bernard Lewis, the well-known “expert” on Middle Eastern and Islamic studies. His advice to the West, stripped of scholarly veneer, and in contemporary terms, is quite simple: fight proxy wars in Iraq, Afghanistan, Libya, Somalia, and the global South – employ agents instead of our own soldiers; manipulate the media to provide “truths” to the masses; use money to buy people, buy governments, buy entire nations; and keep the wolf (read Putin) out of the door. [vi]

Kissinger walked the talk of Lewis during the “Cold War” (by the way, always put the Cold War in inverted commas; it was “cold” for them; for Africa – Algeria, South Africa, Mozambique – it was hot). In 1975 during a conversation with the US ambassador to Turkey and two Turkish and Cypriot diplomats, Kissinger admitted of illegally supporting the military junta in Spain, Greece, and Brazil. He told his hosts that he “worked around” an official arms embargo then in effect. Also, the US exempted the military government in Brazil from crimes of torture to allow it to receive US aid. These post-facto revelations are now documented and released by whistleblowers Assange, Manning, and Snowden (check the internet). See the video Hillary Clinton does not want you to see.[vii]

It is not surprising therefore that in the US Democratic presidential debates Kissinger’s ghost sprung up like, in Shakespeare’s play Hamlet, lurking behind Hillary Clinton (“Prince” Hamlet).  During a debate on foreign policy, Bernie Sanders, the candidate contesting Clinton, referred to Clinton’s close relations with Kissinger. “I happen to believe”, he said, “that Henry Kissinger was one of the most destructive secretaries of state in the modern history of this country.” He cited “the secret bombing of Cambodia during the Vietnam War as a Kissinger-orchestrated move that eventually led to genocide in that country.” [viii]

Clinton, following Kissinger, is an imperial jingoist. Under Clinton as Secretary of State the US and NATO went well beyond their UN Security Council mandate in the Libyan war. The end of the war was the gruesome death of Gaddafi cornered in a hell-hole. Clinton on viewing this remarked with characteristic cynicism: “We came, we saw, he died”. Here is another YouTube video Hillary would not want you to see.[ix] I was shocked when I saw this display of total cynicism and psychic lack of compassion. She is the “war candidate” of the Establishment, and has made her intentions amply clear in relation to Iran, Gaza/Palestine, Syria … and if she has her way, Russia and China.

Trump, the Ogre with a big mouth

In Trump, the Americans have a Presidential candidate who has gone out of his way to be distasteful. He is regularly depicted with a dog’s face in the American Establishment media. And for sure, he has said nasty things about the Muslims, immigrants, Mexicans, Africans – in fact, anybody who comes in his way. “I knocked the shit out of her on Twitter and she never said a thing about me after that”, he said of one of his detractors. “I really like Nelson Mandela”, he said on another occasion, “but South Africa is a crime ridden mess that is just waiting to explode – not a good situation for the people!” [x] On the Black Lives Matter Movement he said:

“There’s no such thing as racism anymore. We’ve had a black president so it’s not a question anymore. Are they saying black lives should matter more than white lives or Asian lives? If black lives matter, then go back to Africa. We’ll see how much they matter there.”[xi]

Trump is criticised for being neurotic. The American journal, The Atlantic (June, 2016) did an article on him by Dan McAdams titled “The Mind of Donald Trump“. Among other things, McAdams says that Trump is an extrovert, “exuberant, outgoing and socially dominant” narcissist character. The cardinal feature of extroversion is “reward-seeking in the short run”. [xii]

But, nobody can deny that he defeated 16 other Republican contenders. In the end he got nominated as the Republican Party candidate. The Party is now distancing itself from him and trying, instead, to focus on winning seats in the Congress rather than backing Trump. But Trump marches on regardless, with his controversial off-the-cuff and “politically incorrect” innuendos against the Establishment, galvanising the youth who are sick and tired of the yawning divide between the rich and the poor in America.

The British paper the Guardian explains the “great paradox” of American politics that holds the secret of Trump’s success:

Trump is an “emotions candidate”. More than any other presidential candidate in decades, Trump focuses on eliciting and praising emotional responses from his fans rather than on detailed policy prescriptions. His speeches – evoking dominance, bravado, clarity, national pride, and personal uplift – inspire an emotional transformation. Then he points to that transformation. Not only does Trump evoke emotion, he makes an object of it, presenting it back to his fans as a sign of collective success…. His supporters have been in mourning for a lost way of life. Many have become discouraged, others depressed. They yearn to feel pride but instead have felt shame. Their land no longer feels like their own. Joined together with others like themselves, they feel greatly elated at Trump’s promise to deliver them unto a state in which they are no longer strangers in their own land.”[xiii]

I’m waiting to buy “Strangers in Their Own Land: Anger and Mourning on the American Right” (to be published in October, 2016) in which the author, Arlie Hochschild, goes on a reflective expedition from her liberal hometown of Berkeley, California, deep into Louisiana bayou country – a stronghold of the conservative right – exposing America’s ever-widening gap between the rich and the poor, the right and left. [xiv]

This is what probably explains why Trump is trouncing the Establishment.

The truth is that nobody knows what lies behind Trump’s mask. May be he wants to “knock the shit” out of the Establishment. May be he is a “narcissist character” seeking reward in the short run. Whatever he is, he has put the Establishment – both Republican as well as Democrats – in a quandary.

Trump has raised questions the people of America should have asked a long time ago. Why is the youth in America angry with the Establishment? Why is the American foreign policy such a disaster?

Trump might make peace with Russia and China. For Africa, this is good.  The continent does not wish to be dragged into another proxy war like during the “Cold War”.

Trump shocked the Establishment when he said that if he were president, the US might not come to the defence of an attacked NATO ally that hadn’t fulfilled its “obligation to make payments.”[xv] Africa should urge him to go further – NATO should be dismantled like Russia did with the Warsaw Pact. NATO is a danger to world peace.

Trump has come out openly against trade and investment agreements like the Trans Pacific Partnership (TPP) and The Transatlantic Trade and Investment Partnership (TTIP). On TPP he said, “The deal is insanity … That deal should not be supported and it should not be allowed to happen.”[xvi] Africa has, ALSO, come out against these mega-trade agreements, driven by American mega corporations.

Trump might scrape AGOA (African Growth and Opportunities Act) which is all about serving America’s, not Africa’s, interests. Trump could also scrape Obama’s “Power Africa” initiative. It is a $7 billion plan to facilitate American corporate investments in Africa. Africa needs to be liberated from these tools of the American empire.

Trump has criticised the notion of “exporting democracy” to the countries of the South saying it is not the business of America to tell Africa how to run their countries.  Exactly.

Trump and Jeremy Corbyn – the Labour Party leader in the UK – though poles apart politically, have one very significant thing in common. They are both harangued by the mainstream media and the established order in their respective countries. Like Trump, Corbyn is under attack not only by the Conservatives but also by the Establishment in the Labour Party spearheaded by the Parliamentary Labour Party.

Africa has for centuries (during slave trade and later through colonisation) been victim of the Establishment. Both Corbyn and Trump have an impressive backing from the youth of their countries. Why? Because they too, like the masses in Africa, are bitter against the dominant global order. We may not connect with Trump, but he could open space for us to establish solidarity links with the people in America, especially the youth, who too are suffering from the oppression of the Establishment warlords.

* Yash Tandon is from Uganda and has worked at many different levels as an academic, teacher, political thinker, a rural development worker, a civil society activist, and an institution builder. His latest book is Trade is War.