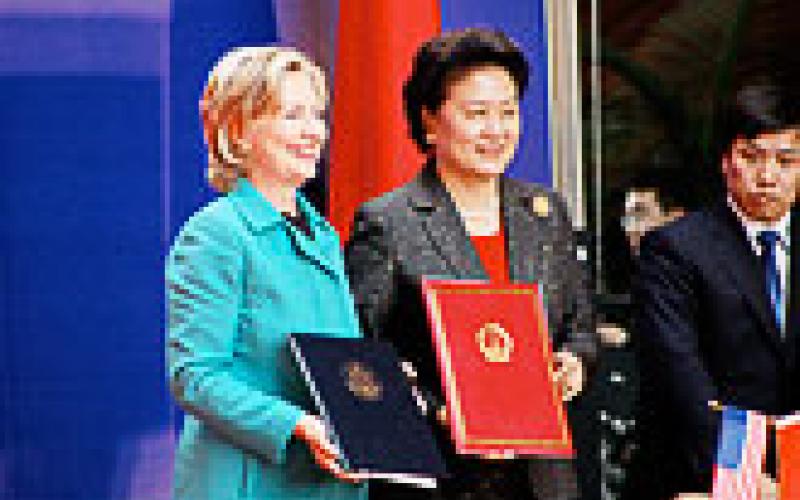 US Secretary of State Hillary Clinton jetted in to Africa recently, holding a press conference in Lusaka where she warned of a ‘new colonialism’ in Africa. Such warnings would be more credible to Africans if the US got its own record straight, points out Isaac Odoom.

Last week Hillary Clinton, US Secretary of State, embarked on an official African trip that took her to Zambia, Tanzania and Ethiopia. In a press conference in Lusaka Clinton is reported to have warned her host continent about ‘new colonialism’ in Africa from external actors and investors interested only in extracting Africa’s natural resources (see The Huffington Post.)‘We saw that during colonial times, it is easy to come in, take out natural resources, pay off leaders and leave…We don’t want to see a new colonialism in Africa,’ Clinton said in Lusaka. ‘When people come to Africa to make investments, we want them to do well but also want them to do good…We don’t want them to undermine good governance in Africa,’ she said.

Clinton did not mention China by name, but as her officials later confirmed to reporters, she wanted to stress that African countries should beware of the Chinese and hold their investors to high standards. Thus the US is concerned that China’s foreign assistance and investment practices in Africa have not always been consistent with generally accepted international norms of transparency and good governance.

Clinton’s remark on Chinese ‘new colonialism’ and her offer of the United States as the best partner to help African countries improve themselves will receive diverse reactions among different observers, including African and Chinese leaders and investors. Rightly or wrongly, for some (African) sceptics Clinton’s remark is hypocritical; as a western policy maker she lacks the moral right to make such comments about other external actors, considering US and European foreign practices and policy priorities in Africa over the years. Chinese leaders may fume over her comments, which seem to imply that China is not investing for the long run, or is only interested in narrowly investing in African elites. Chinese officials may claim that their multiple visits to countries across Africa over the past five decades, the numerous infrastructure projects and business investments in multiple sectors of African economies, suggest a much longer, deeper, and broader set of interests than Clinton appears to acknowledge.

Whichever way one chooses to interpret Clinton’s comments her bold advice to African leaders is impressive. In fact her concern about Africa's political and economic governance is commendable. However, many observers of Africa’s international relations would wish she had shown the same concern about other external actors’ foreign policy practices including US foreign assistance and investment practices in Africa. One is tempted to ask: Why is the US so concerned about the role of China in Africa? Is China the only ‘bad guy’ in town? Aren’t some Western actors complicit of the same activities in Africa? (Deborah Brautigam addresses these questions in her book, ‘The Dragon's Gift: The Real Story of China in Africa’.)

Obviously there is plenty to criticise in China's practices in Africa and human rights record at home and in Africa, and plenty of room for improvement as Chinese leaders take uncertain and inconsistent steps toward being a responsible partner with Africans. But in my view Clinton’s remarks need to be placed within the broader context of the evolving narrative/discourse on China’s rise on the global stage, in particular its increasing engagement with African countries, in the past decade.
Certainly, Africa-China relations are multifaceted and complex. However, in the growing narrative among many observers, including some academics and western policy makers, there has been a tendency to reduce China-Africa policies to either ‘China is the worst’ or ‘China is the best.’ With such a reductionist approach some important questions are not receiving much attention and more importantly the ‘real’ intentions of some of these commentators are obscured. For example, Chinese leaders and the press seek to present an all-rosy picture of China-Africa relations, based on friendship and mutual benefit. And while some African journalists and local business owners are much more sceptical, some African leaders have a positive view about the benefits of embracing China (see BBC Survey).

More importantly, in line with Clinton’s remark in Lusaka, much of the commentary emanating from Western media and policy makers on China’s engagements in Africa has been dismissive. China has been described as a ‘rogue donor’ offering ‘toxic aid’ to Africans. In one of the Wikileaks cables released late last year US Ambassador Johnnie Carson described China as ‘a very aggressive and pernicious economic competitor…[with"> no morals’ in Africa (See www.bbc.co.uk) Is this really the whole picture of China’s engagements in Africa?

As some have suggested, in the waves of hasty conclusions and (sometimes) show of ignorance on the real Chinese impact in Africa, some if not most of Western policy makers ‘accounts of the aggressive expansion of Chinese interests into African countries and societies and their collaboration with local autocratic elites and despots have a hypocritical taste or at least bear traces of amnesia…One therefore is tempted to wonder, if the concern expressed is actually not more about Western interests than about the welfare of the African people, given that what we witness today is anything but new with regard to its forms and effects’ (Henning Melber, 2007 p.6).

This is not to suggest that one cannot criticise certain practices and strategies of the Chinese in Africa simply because the remarks come from a Western actor. But it does suggest that the legitimacy of the critique itself may well depend on the underlying interests of those criticising. It is not realistic to assume that Chinese foreign policy and development aid is interest-driven whereas in general the critique of these practices is not.

Granted that the overall objective of such criticisms must be the well-being of the African people, the self-legitimisation of such discourse through the ‘we care about Africans’ rhetoric cannot be a credible motive for opposition to Chinese practices in Africa. The historical experience, that humanitarian concerns are highlighted by the West when it is strategically most opportune, determines the credibility of many official voices now articulating their concerns about the possible impact of ‘new’ actors in Africa, particularly China.

Clinton rightly recognised that ‘China’s foreign assistance and investment practices in Africa have not always been consistent with generally accepted international norms of transparency and good governance’. Indeed China has a lot to do to rationalise and improve upon its multi-faceted engagements with African countries, but so too does the US (and other western actors, including multinational banks and oil companies). Aren’t countries with poor records on democracy and governance - Egypt and Ethiopia - beneficiaries of US aid in Africa over the years? Is it not the case that energy security concerns sometimes trump good governance in relations between the US government and Equatorial Guinea? Is this consistent with generally accepted international norms of good governance?

It could be said that the strategic goals and interests of China differ little from other external actors readily open to African countries than Clinton will have us believe. A deeper and careful analysis of China’s relations with African countries may reveal that China is ‘doing’ politics or ‘development’ in a seemingly ‘similar’ yet unexpectedly ‘different’ way.

Over-fixation on the ‘Chinese exceptionalism’ as a way of legitimising one’s strategic interests and objectives in Africa is not the way to go. Such warnings will be more credible to Africans if the US and other external actors get their records straight. Otherwise such remarks may not only get some observers fuming over the underlying interests of those criticising, but it may also embolden China.

That said, Africans should be under no illusions about Chinese (US or EU) goals in their countries. The Chinese, like any other external actor, act in a ‘realist’, ie self-interest manner. But precisely because China acts in an interest-oriented manner and, for historical reasons, cannot apply the same ‘salvation rhetoric’ and strategies as the West does to legitimise their ‘intervention’ in Africa, there is incredible potential for a great partnership between the Chinese and Africans. Africans must unlock this potential. Africa cannot afford to allow China-Africa relations to be on China's (or anybody’s) terms. It has to be on our terms. We need not wait to be warned or lectured by some self-interested actor somewhere before we act. China is real. It’s time to ask what is Africa doing about China, not what is China not doing, or doing in Africa.

* Isaac Odoom is a graduate student at the University of Alberta in Canada. kojo.odoom[at">gmail.com
* Please send comments to editor[at]pambazuka[dot]org or comment online at Pambazuka News