Home » Global South » The Great October Revolution: Declaration of rights of the working and exploited people

The Great October Revolution: Declaration of rights of the working and exploited people 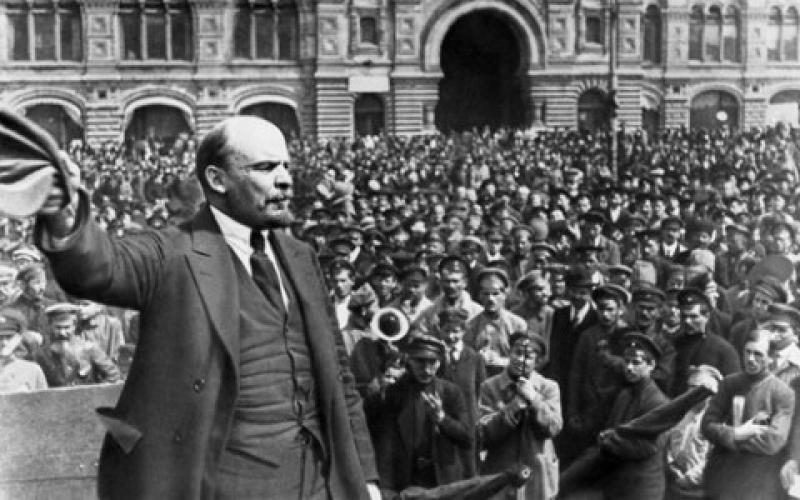 Abolishing all exploitation, completely eliminating the division of society into classes, mercilessly crushing the resistance of the exploiters, establishing a socialist organisation of society, and achieving the victory of socialism in all countries were declared as the fundamental aim of the newly established Soviet Russia, a Republic of Soviets of Workers’, Soldiers’ and Peasants’ Deputies.

That was the proclamation of the Declaration of Rights of the Working and Exploited People [[i]]. The Declaration, one of the unique achievements the proletariat made immediately after the seizure of political power through the Great October Revolution, is the yearning of the exploited people all over the world. The declaration, a significant political measure by the revolutionary proletariat, said:

“All power, centrally and locally, is vested in [the] Soviets.”

At the All-Russia Central Executive Committee on 16 January 1918, the draft of the Declaration was tabled; was adopted by a majority while two votes went against and one vote abstained, and was referred to a Coordinating Commission for final drafting. The All-Russia Central Executive Committee adopted the Declaration. It was published in Izvestiaon 17 January 1918. On 18 January 1918, Sverdlov, on behalf of the Committee, read out the Declaration at the first sitting of the Constituent Assembly (CA), and motioned for approval. Nevertheless, the counter revolutionary majority of the CA rejected the motion to discuss it.

Nevertheless, the Third All-Russia Congress of Soviets approved the Declaration on 25 January 1918, and it formed the basis of the Soviet Constitution [[ii]].

The Declaration said: The Republic, established on the principle of a free union of free nations, is a federation of Soviet national republics.

The conversion, it said, is “one of the conditions for the emancipation of the working people from the yoke of capital.”

“[T] here can be no place for exploiters in any government body. Power must be vested wholly and entirely in the working people and their authorised representatives – the Soviets of Workers’ Soldiers’ and Peasants’ Deputies.”

Referring to the Soviet law on the cancellation of the loans contracted by the governments of the tsar, the landowners and the bourgeoisie as a first blow struck at international banking and finance capital, the Declaration expressed its conviction: “[F]irmly pursue this path until workers’ uprising against the yoke of capital has completely triumphed.”

It should be mentioned that on 19 December 1917, the Finnish Diet adopted a declaration of Finland’s independence; on 31 December, the Council of People’s Commissars of Soviet Russia issued a decree of Finland’s independence; Lenin personally handed the text of the decree to Svinhufvud, Prime Minister of Finland; on 1 January 1918, the Soviet government proposed to the Persian government to elaborate a common plan for the withdrawal of Russian troops from Persia; on 11 January 1918, the Soviet government issued the Decree on Turkish Armenia.[[iii]]

The Declaration, drafted by Lenin, identified tasks of the CA: “[E]stablishing the fundamental principles of the socialist reconstruction of society”; “setting up the fundamental principles of a federation of Soviet Republics of Russia, while leaving it to the workers and peasants of each nation to decide independently at their own authoritative Congress of Soviets whether they wish to participate in the federal government and in other federal Soviet institutions, and on what terms.”

However, the CA, controlled by representatives of the exploiting classes rejected the document. Thus, it left no option for the political power of the proletariat to take further move instead of relying on the CA. Rightist theoreticians, and a section among the left regularly deny this fact of the revolutionary developments, which engulfed Russia of 1917.

The Declaration is fundamentally different from all declarations of rights the bourgeois and feudal political systems, compromises between them issued until today. It directly and unequivocally stood for rights of the exploited, and retained nothing for compromise with the exploiters as it defined rights based on hostile interests of the contending exploited and exploiting classes. The declaration made assault on exploitative property relations and private property, cancelled rights of the exploiting classes and parasitic elements in the society, and declared measures for empowering the working people to resist the exploiting classes. The Declaration’s stand against finance capital and imperialism makes the working classes’ position on the world stage singular and leading as no other class and no other declaration took such a stand.

Adopting the Declaration would have been impossible for the proletariat and the political leadership at the helm of the revolution had the proletariat and its leadership not supported and followed the masses of people, as they were spearing the heart of the opponent classes, the classes owning the most powerful base of the time – private property. The exploiting classes had an efficient exploitation mechanism. They were in control of finance capital. Imperialism was standing by the classes. This makes the Declaration a heroic document unparalleled in the world history.

The mass base was a result of a long political work within a socio-political reality, a fact ignored by a group of mainstream historians, political scientists, so-called “Marxologists” and theoreticians upholding Menshevik views. “Indeed, if the revolution is not misleadingly framed as an overnight upheaval, its popular, mass character is apparent even in its preparation, in the many millions of people organising themselves, who were later ready to follow the Bolsheviks even through the period of civil war. Without this mass movement, they would have hardly stood a chance of defeating the White counterrevolution — supported financially and militarily by the West — not to mention the international imperialist intervention against Soviet Russia. [[iv]]

These “Marxologists”, and others in their band deny the fact: “The epic sweep of those days that carried millions of people along can be seen from several angles. The Western European press of the time had no idea what was going on. Painting nightmarish visions of rioting drunken sailors and marauders thirsty for revenge descending on the rich, the 10 November issue of the Paris Journal de Débatsreported the ‘rampage of the defeatists, the traitorous cosmopolites,’ who ‘do not represent the public opinion prevalent in the country,’ and call for a repetition of the Kornilov putsch, but on ‘even grander scale.’ However, the Times of Londongave a more objective overview on 19 November, citing the restoration of public order, the reinstitution of tram traffic in Petersburg, and the merry crowds attending the movies and theatres: ‘If food supplies are sufficient, the city will remain calm. Food stocks are enough for 10 days. Crime has virtually stopped under the oversight of the radicals.’ John Reed’s account — in his magnificent Ten Days that Shook the World — does not continue in the spirit of the bourgeois papers, but evokes the mood of the revolutionary masses, becoming, in its reflection of that radical fervour, a kind of folk artwork, a primary historical source.” (ibid.)

Many persons, politicians, theoreticians discussed the property-question for centuries. Thomas Jefferson, in a letter to James Madison in 1785 [the editor, in a note, mentions the year although the letter is dated 1795], wrote: “[T]he property of this country [France] is absolutely concentrated in a very few hands.”[[vi]] He mentions “very considerable proportion of uncultivable lands […] undisturbed only for the sake of game. […] [I]t must be because of the enormous wealth of the proprietors […]” Then, he adds: “[A]n equal division of property is impracticable.”

However, in the letter, he mentions “the consequences of this enormous inequality producing so much misery to the bulk of mankind”, and says: “[I]t is clear that the laws of property have been so far extended as to violate natural right.” The debt-ridden farmers’ rebellion led by Daniel Shay in 1786-1787-western Massachusetts claimed: The state legislature was in the hands of the wealthy and it was used for their benefit. Upper classes in other states turned worried with the growing support for the rebellion. Authorities crushed the rebellion.

Robespierre wrote in 1793: “[I]t took a revolution to teach the world that extreme disparities in wealth lie at the roots of many ills and crimes […] For myself, I think it to be less necessary to private happiness than to public welfare.” (“On property rights”) He gladly preferred to be “one of the sons of Aristides, reared in the Prytaneum at the cost of the Republic, than to be the heir presumptive of Xerxes, born in the filth of courts and destined to occupy a throne draped in the degradation of peoples and dazzling against the public misery.”[[vii]] Despising property, cursing its evil effects on commoners, opposing it and dreaming its dissolution are found in rebellions by masses of the poor in countries, in their proclamations and demands. However, no political power overthrew it or promised bringing it down. The Declaration fulfilled the historic task ignored/not recognised by the mainstream as the Declaration proclaimed rights of the exploited, and laid legal ground for the rights.

The Declaration’s significance in the perspective of the world proletariat’s fight against capital is also immense. The Declaration’s position on arming of the working people is far advanced than the English Bill of Rights (An Act Declaring the Rights and Liberties of the Subject and Settling the Succession of the Crown (1689)), which, with a sectarian view, allowed arming of a section of citizens only in self-defence.

The Declaration did not stand on the bourgeois view of equality and equal rights of capital and labour, which exists only on paper. The bourgeois view ignores unequal opportunity/access of rights based on unequal and antagonistic class relationship. All declarations of rights that the bourgeoisie and their political apparatus proclaim ignore this unequal and antagonistic class relationship although all the areas that these declarations act in are characterised by this class antagonism. “The control exercised by the capitalist is not only a special function, […] but it is, at the same time, a function of exploitation of a social labour-process, and is consequently rooted in the unavoidable antagonism between the exploiter and the living and labouring raw material he exploits.”[[viii]]

All mainstream declarations pronounce “rights” – rights/entitlements to foods, well being, equality, justice, and many other human rights, but those do not look at the roots of inequality, injustice and violation and power of violation of rights: private property, unequal distribution of property, capitalist production. The declarations deny looking at exploitation, which gets life from private ownership of means of production.

Contrary to the position of these declarations, the Declaration of Rights of the Working and Exploited People decimated the material basis of inequality and absence of rights in the life of the working people. The act is the reason behind the capitalists’ and their theoreticians’ continuous condemnation of the Great October Revolution, continuous condemnation of Lenin and his comrades, the leaders of the revolution.

[ii]LCW: 26, notes 154 and 156) On Lenin’s proposal, the Declaration was incorporated as the first section of the Constitution of the Soviet Russia, adopted 10 July 1918 at the All-Russian Congress of Soviets. (Presidential Library, “Declaration of rights of working and exploited people adopted”