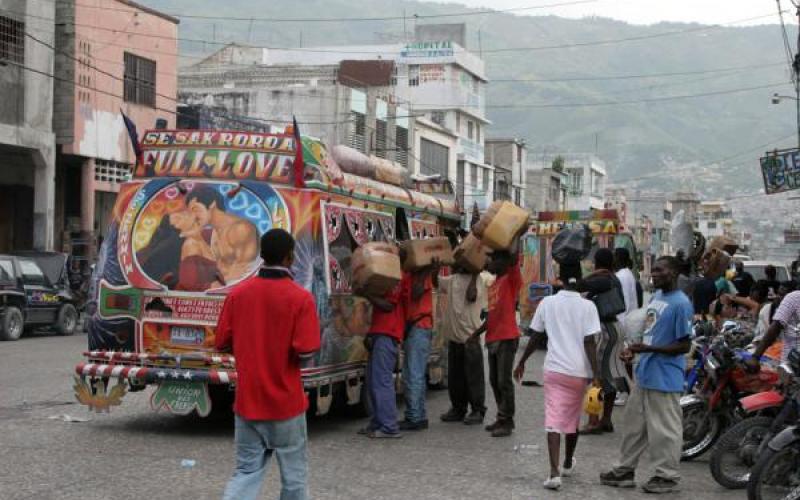 The amalgamation of a failed private sector with kidnapping, drug trafficking, and bad government constitutes the most important reason that explains Haiti’s failure in its quest to build a nation-state. Unfortunately, the United States government, symbol of nation building, is often on the wrong side of history in Haiti.

I read on the NBC website about how the private sector in the United States had created 216.000 jobs for the month of November, 2016, the expectation was 165.000. For the last 8 years during the Obama administration 15.6 million jobs have been created by the US private sector. That’s so revealing!

I am not comparing the US economy to Haiti’s considering this country’s long business tradition, and the vast amount of wealth created for the past two centuries. However, I want to stress the responsibility of the private sector in America versus the one operating in Haiti. Sometimes, people straightforwardly ask if there is a private sector in Haiti because there is no evidence that suggests otherwise.

The private sector is “the part of the economy that is not under the government’s control.” It is protected by a bunch of laws that guarantees its growing existence to maturity with only one goal: making profits. In Haiti, there is a concoction of roles. It seems that the private sector, the public sector, and the charities are working together in an evil way to crush the people.
I remember right after the earthquake that destroyed Port-Au-Prince, the capital of Haiti, in January 12th, 2010, I witnessed the rich people intertwining with the poor for a long period of time to benefit from the humanitarian aid. In some other countries, one would see something different. The rich would provide aid to the vulnerable souls. The most disgusting part remains: after a euphoric poor people-rich people interaction, the economic class, at first, monopolized the free international aid distribution. Later, it sold at an expensive price to the poor the same goods that the latter individuals were morally and legally entitled to.

In addition to profit-making, the private sector is morally obligated to create jobs. Without purchasing power, the potential customers won’t be able to consume and pay their bills. Hence, the consequences will be automatically disastrous even for those who own the means of production. Why? Because there is no consummation! -- Production will be hurt. No profit. This unbalanced equation is contrary to capitalism whose reality, among others, consists of employers making profits at the expense of employees’ labor. One may thusly summarize this reciprocal relationship:  no jobs, no profits!

I believe that the Haitian private sector doesn’t get it. Right after the Duvalier dynasty’s departure in February 1986, international financial institutions such as the IMF, the World Bank, IDB (Inter-American Development Bank) …tried to impose their view on how to run Haitian finances. In fact, they expected to develop capitalism in Haiti to definitely put an end to feudalism. The only problem is, and continues to be, that the Haitian economic class has never been ready for such an adventure. Under pressure from the aforementioned institutions, the local government sold the cement and flour companies to the private sector. Just one year after the deal, both businesses closed their doors. Then, there followed a shortage of cement and flour. Subsequently, many hundreds of people lost their jobs. Unemployment was rampant. Social unrest created a chronic instability. Worse yet, there is no unemployment benefit in Haiti which could have alleviated the jobless individuals’ burden.

Haiti is a poor country, among others, with 41% unemployment rate, 48% illiteracy rate, and 60% of people living below the poverty line. At the same time, a handful of 5 families controls the entire wealth. I remember talking to an American professor about how many billionaires we have in Haiti. At the beginning, he started to laugh at me. The paradox is that we have several Haitian billionaires. The US government has seemingly tried, on many occasions, to stimulate the private sector in Haiti through many programs such as the Haitian Hemispheric Opportunity through Partnership Encouragement Act of 2006 (HOPE); the Food Conservation and Energy Act (HOPE II) in 2008; and, in 2010, the Haiti Economic Lift Program (HELP). All of these initiatives have been put in place to stimulate foreign investment in Haiti, and to rally the private sector to redeem itself by profiting from those programs of those open doors via “Eligibility for duty-free treatment under the Caribbean Basin trade partnership Act (CBTPA)”. The main goal was to create jobs; the Haitian private sector didn’t seize the opportunity.

The Haitian Diaspora which is sending more than 2 billion dollars to Haiti each year is not welcome to participate actively in the economic and political process. Those 5 families in command of the economy are hostile to the Diaspora who is trying to invest in Haiti. Yet, “Haitian-Americans are among the most successful immigrant groups in the United States”. Last year, Haiti’s GNP showed a deficit of 2.5 billion dollars because we exported for 1.029 billion dollars, while we imported for 3.445 billion dollars.

Haitian businessmen operate as a mafia organization. They burn businesses, kidnap family members and shoot people like dogs in the streets if you are not one of them…They monopolize all vital aspects of the economy: from tourism, textile, production, government and private institutions. At the same time, they are not taking any serious measures to develop the economy to create jobs for the people. They are fiercely against all sorts of competition. They favor monopoly. Customers are totally screwed up.

Now, let’s talk about the dilemma private sector vs. the public sector.  Everywhere in the world, nations are developing a public/private partnership to better serve the people and themselves. In Haiti, businessmen own the public sector. The rich maintain their grip on governmental institutions. All of them! There is no balance of power, meaning no accountability for any mischief caused by economically powerful individuals. That’s why they have always supported, financed and corrupted presidential candidates in each election.

The last known took place on November 20th, 2016. The big business supported the “statu quo” represented by Jovenel Moïse. He is a businessman who is being investigated for money laundering, racketeering, and drug connection by the country’s highest financial court (Cour Supérieure des Comptes known by its acronym CSC). He was handpicked by Michel Martelly himself, the former Haitian president.

Let me tell a true story that happened last year in Haiti. There is a powerful guy named Jacques Kétant. He was arrested in 2003 because his bodyguard went inside of a school attended by US embassy personnel’s children to murder in broad daylight a government official. Jacqueline Charles, from Miami Herald, delivered her opinion about Mr. Ketant as follow: “Considered the Pablo Escobar of Haiti, Ketant lived a lavish lifestyle in Haiti, where he was an untouchable kingpin until Aristide gave in to U.S. pressure in 2003 and expelled him. He was soon sentenced to 27 years in prison after pleading guilty to smuggling 30 tons of cocaine from Haiti to the United States.”

On August 18th, 2015, the US judicial system decided to deport him back to Haiti after serving half of his sentence because the court found him to be cooperative. Many drug dealers have been arrested and sentenced to long prison terms. Upon his return to Haiti, Mr. Kétant was greeted and picked up at the airport by Roro Nelson and Gracia Delva. Mr. Nelson is among former president Michel Martelly’s closest friends for years; some people believe that he was there to welcome Mr. Kétant under Mr. Martelly’s express demand. Similarly, Mr. Gracia Delva, a member of parliament, is a deportee from the United States. Delva is about to be a senator very soon. Among other Martelly allies known for their criminal activities are:  Guy Philippe (pursued by DEA as a fugitive for drug trafficking); Youri Latortue, also senator, has been involved in drug activities, according to Wikileaks; Joseph Lambert, freshly reelected to senate, also has a drug connection; Willot Joseph, newly elected senator, has been implicated in drug trafficking. The Haitian senate is going to be filled up with a bunch of “drug dealers”.

Additionally, it is noteworthy to highlight the case of Clifford Brandt, a well-known businessman. He is also the son of one of the richest families in Haiti. Arrested for kidnapping in 2012, he was sentenced this year to spend 18 years in prison, after a long trial that lasted 4 years. He was identified as the closest friend of Olivier Martelly, former president Joseph Martelly’s son.

Former US ambassador to Haiti, Mr. Brian Dean Curran, in his farewell speech before leaving the country, addressed the chamber of commerce in Haiti by saying: “Yes, well-known drug traffickers. They buy from your stores; you sell houses to them or build new ones. You take their deposits to your banks. You educate their children, and you elect them to positions in chambers of commerce.”
In front of many businessmen of the country, Mr. Dean Curran denounced how they have no respect for themselves by using “dirty money” to make profits. Here is a short prospect about the Haitian bourgeoisie: all deviant actions are welcome to make money including placing corrupted leaders to power.

When Jean B. Aristide got elected to power in 1991, his program was essentially to fight inequality in Haiti. His government published a list of hundreds of businessmen who owed a lot of money to the state. Instead of starting to pay or make payment arrangements, they instead financed a multi-million-dollar military coup against the elected and legitimate president (of course with CIA/State Department’s help). The consequences were catastrophic: 5,000 deaths and 100,000 refugees. Therefore, the private sector in Haiti is against progress and is indirectly fighting social stability. The business sector spent 13 years fighting each attempt to normalize the social and political situation.

The last successful attempt, supported by the Clintons, was to parachute Joseph Martelly into power--a man who admitted that he had been a drug addict/dealer; he was denounced as a spy for “FRAPPH”, a defunct terrorist organization known for its misogyny, brutality, and political assassinations.  While in power, Martelly conceded a contract to Tony Rodham, Hillary Clinton’s brother, to exploit Haitian gold estimated at 25 billion dollars. That is a typical case of the so-called “Pay to play” game. For five straight years, the former head of state looted public funds, “legalized drug trafficking”, promoted prostitution, domesticated public institutions at the highest level via bribes and huge kickbacks. Here we are enduring Martelly’s dire economic heritage: 3 billion dollars debt, 300 million dollars budget deficit.  Let it be reminded that when Martelly got to the power in 2011, he found 1.9 billion dollars in the public treasure. Furthermore, the country had zero debt. Do the math!

Center for Strategic and International Studies “The role of the Haitian Diaspora in building Haiti back better (June 24th, 2011)