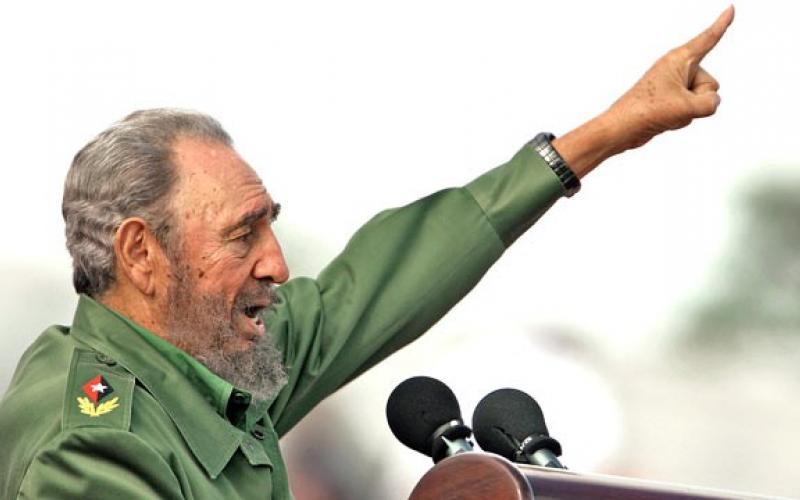 In his 20s, Castro already attempted to liberate his country from the grip of a military dictatorship. Eventually he succeeded. And once in power, his single agenda was to serve the Cuban people - and humanity through internationalist solidarity. What are the masses of young people languishing in poverty and hopelessness under misrule throughout Africa and the Global South waiting for? Arise!

As El Comandante Fidel Castro’s ashes are interred today (4th December 2016) in Santiago de Cuba, the place where the July 26th rebel movement began its journey to overthrow dictatorship and capitalism, there are many lessons that Kenyans and the whole of humanity can learn from the life of this great legend.

He remains a great inspiration to the young people of this country who are disturbed by the ever rising levels of poverty, greed and corruption. In his 20s, Fidel’s conviction for a just society led him into organising two attempts to overthrow the then military dictatorship of Fulgencio Batista, and he was eventually successful at the young age of 32.

Fidel disembarked from the Granma boat with a rebel army of 87 men and got to the Sierra Maestra mountains with less than twenty guerrillas. Through such actions, he continues to inspire those working for a better society but are few in numbers. He was never discouraged by the loss of combatants or the greater fire-power of Batista’s army; he understood that what he needed on his side was the support of the masses and not bigger guns.

Fidel teaches us to always be prepared. It was through preparation and working with the masses that Fidel Castro was able to defeat the U.S-trained soldiers who invaded Cuba in 1961 at the Bay of Pigs. It is this preparedness that has deterred the U.S from militarily invading Cuba since then.

Unlike the primitive accumulation tendencies that we see with our African leaders, Fidel Castro and his leadership never sought material riches for themselves. They worked hard to ensure that every Cuban had equal and unlimited opportunities to achieve what they humanly could. That is how Cuba was able to achieve unparalleled successes in the fields of education, preventive and curative health, sciences, gender and racial equality, housing and employment among other aspects of human development. All this was achieved in spite of the existence of the most brutal economic, commercial and financial blockade from the U.S that has been in place for over 50 years.

Through Fidel, a lesson on resilience and being true to self is learnt. Not many countries can survive a blockade such as the one that has been imposed on Cuba. Through resilience, Cuba has not only survived that blockade, but has managed to mobilize the whole world into condemning this U.S aggression. Every year at the UN General Assembly, virtually all countries except the U.S and Israel vote against the blockade. Fifty-four years into the blockade, the U.S President Barack Obama admitted that its policy had failed and he began the process of normalization of relationships between the two countries. However, the blockade still remains in force.

After the fall of the USSR, Cuba lost its closest trading partner and the Cuban economy was brought to its knees. Many countries abandoned Socialism; many Socialist political parties across the world dropped Marxism-Leninism as their ideology; and many Marxists intellectuals and politicians no longer wished to be identified with Socialism. However, Cuba’s Socialism did not fall with the fall of the wall. The country instead diversified and realigned its Socialist economy by moving towards green energy, popular organic farming, pharmaceutical and biomedical technology and other niches that are today the envy of many.

Out of this resilience and inspiration, Socialist countries began to rise a decade later in Latin America, from Venezuela, Bolivia, Nicaragua to Ecuador. Leftist governments also came into power in Argentina, Brazil and other Latin American countries. Throughout Africa, the old 'Marxist' intellectuals were replaced by young Marxist revolutionaries whose understanding was/is not pegged on Mother Russia but on the principles of equality and prosperity of humanity, just like Fidel Castro did.

Under the leadership of Fidel Castro, Cuba taught the world the most important lessons on giving and solidarity. Cuban universities have awarded thousands of full scholarships to youth from developing countries who are now serving their countries as doctors and other professionals. Cuba does not award these scholarships because it is a rich country. In fact, Cuba’s GDP is smaller than that of many developing countries, including Kenya. Cuba gives because sharing is a human responsibility. This poses a challenge to countries like Kenya that are surrounded by worse off countries. How many scholarships does Kenya give to young people from Somalia, South Sudan or the DR Congo?

Cuban combatants have fought alongside their African compatriots in their struggles against colonialism and imperialism. Cubans assisted Algeria, Guinea-Bissau, Mozambique, Angola, Namibia, Ethiopia and South Africa either in their struggle for independence or in their wars against external aggression. And as Raul Castro once said while in Angola, Cuba fought alongside Africans and left not with coffee or minerals, but with the body bags of their heroic soldiers. Cuba’s internationalist policy is unlike the U.S globalization policy; Cuba did not sacrifice its children so that they could exploit and dominate others, but it did so to fulfil its internationalist duty to humanity.

Western Sahara, continues to be Africa’s last colony up to this day. Are African countries waiting for Cubans to come and fight for the decolonization of the Saharawi Arab Democratic Republic? Do we think petitions and African Union commission reports will convince Morocco to leave Western Sahara? Haven’t we learnt anything from the sacrifices of the Cuban people?

Today, Cuba continues with this internationalist practice, but now by sending humanitarian ‘combatants’ wherever humanity needs them. From hurricane crises in Asia and the Americas, to the Ebola crisis in West Africa, Cuban doctors have always been on the frontlines of fighting and containing these disasters. While commenting on the Haitian earthquake, one Haitian expressed his gratitude to the Cuban doctors by stating that “After God, Fidel.”

Fidel gave us lessons on how to fight today's emerging crimes like terrorism. In the 1980s and the 1990’s, terrorists from Miami (supported by the CIA) tried to destroy Cuba’s tourism industry by bombing hotels, Cuban airplanes and other economic interests, even going to the extent of using bio-terrorism on innocent civilians. Rather than terrorise and alienate innocent civilians like the Kenyan government is doing today, Fidel sent his security personnel to infiltrate the enemy and unearth terror plans before they happened. That is how the world famous Cuban anti-terrorism heroes, popularly known as the Cuban Five came to be (They were arrested in the U.S and given harsh life sentences for espionage, but were freed by President Obama in December 2014).

Throughout his life, Fidel has survived hundreds of assassination attempts on his life and worst still on his character, but this never dampened his resolve. They lied about his wealth but he continued living a simple life. They lied about human rights violations but he continued to provide the highest attainable human rights for his people. Even at his death, reactionary media continues to desecrate his name by publishing lies about this great revolutionary. Fidel has taught us to ignore the liars and detractors and instead soldier on and do what is right.

I therefore reiterate the homage that Carlos Aznárez paid to Fidel Castro when he wrote:

"So, when difficulties seem too much, and we believe we’re running out of strength, when we lack answers and when confusion makes us doubt about who the enemy is, when times are dark and without hope, let’s go back to Fidel, to his ideas, to his ethic, to his audacity, to his courage, to his revolutionary power, and let’s rise again to continue this wonderful adventure to take the skies.”

A little heartbroken but never defeated, we salute you, dear Commander. We will turn back to you every now and then and ask you: “Are we doing well, Fidel?”

An avid reader, a sportsman, an arts enthusiast, a teacher, a great leader, a prolific writer, an environmentalist, an orator, a thinker, a fighter, and above all, a Communist.