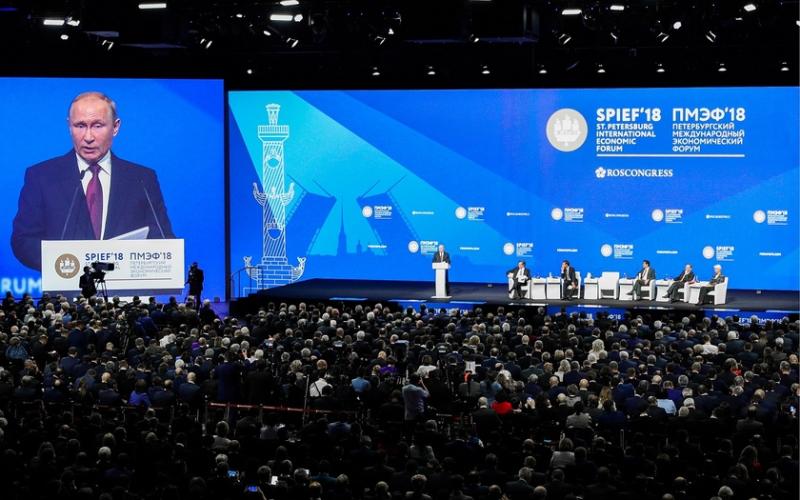 Over the years, the Saint Petersburg International Economic Forum has become an open platform to exchange best practices and key competences in the interest of providing sustainable development.

The Forum brought together a record-breaking number of participants: over 19,000 people from 145 countries, with 1,300 guests representing heads of companies. The sheer number of business community participants, variety of thematic events, and the level of representation on both national and international levels underscore the status of the SPIEF as a truly global economic forum.

During his address to the participants of the Forum, Vladimir Putin talked about the tasks the country is facing, as well as about the importance of national projects as drivers of economic growth in Russia.

The overall budget for the implementation of proposed development projects in Russia is about US$400 billion. The priorities are healthcare, education, research and development, and support for entrepreneurship. And, considerable funds will be allocated to developing major infrastructure, transport and the energy industry.

Putin praised guests and participants’ friendly attitude to Russia, their willingness for joint work and business cooperation based on pragmatism, understanding of mutual interests and, of course, trust, frankness and clear-cut positions. That global inequality between countries and regions is the main source of instability. It is not just about the level of income or financial inequality, but also fundamental differences in opportunities for people.

More than 800 million people around the world do not have basic access to drinking water, and about 11 percent of the world’s population is undernourished. A system based on ever-increasing injustice will never be stable or balanced.

As a first step, necessary to conduct a kind of demilitarisation of the key areas of the global economy and trade, that also includes utilities and energy, which help reduce the impact on the environment and climate. This concerns areas that are crucial for the life and health of millions, one might even say, billions of people on the entire planet.

Russia has embarked on implementing long-term strategic programmes, many of which are global in nature, it is important to hear each other and pool efforts for resolving common goals. Russia is ready for these challenges and changes.

During the four days of the Forum, over 1,300 speakers and moderators, including Russian and international experts, took part in discussions. They shared their knowledge, experiences and best practices with the participants of the Forum. There was a special zone of the area that hosted interviews with politicians, government officials, representatives of big business.

On the sidelines, there were business dialogues between Russia and other countries, for example Russia–Africa, were very popular this year. Deputy Speaker of the Parliament of the Republic of Zimbabwe, Mabel Chinomona, was one of the African participants. Other state officials came from Botswana, Egypt, Zimbabwe, Côte d’Ivoire, Lesotho, Mauritius, Niger, Sierra Leone and Uganda.

The Russia-Africa session featured Mikhail Bogdanov, Deputy Minister of Foreign Affairs of the Russian Federation; Special Presidential Representative for the Middle East and Africa; Amani Abou-Zeid, Commissioner for Infrastructure and Energy, African Union Commission and Tatyana Valovaya, Member of the Board – Minister in Charge of Integration and Macroeconomics, Eurasian Economic Commission.

The participants noted that 2019 should be a historic year in the development of Russian-African relations. The summit of heads of state in October should take place amidst record growth in Russian exports to Africa. Russia is interested in new markets and international alliances more than ever before, while Africa has solidified its position as one of the centres of global economic growth in recent years.

In this context, the countries need to rethink the approaches, mechanisms, and tools they use for cooperation in order to take their relations to the next level as their significance grows in the new conditions of world politics and economics. What steps are needed to give a new impetus to bilateral economic relations? What are the key initiatives and competencies that can create a deeper strategic partnership between Russia and African states?

These are among the key questions on the meeting agenda for the upcoming Russia-Africa Summit planned for October in Sochi under the co-chairmanship of the president of the Russian Federation Vladimir Putin and President of the Arab Republic of Egypt Abdel Fattah el-Sisi, Chairperson of the African Union.