Former Finance Minister Pravin Gordhan and super-consultant Iraj Abedian, two solid bourgeouis representatives, have made an unusually passionate case against what is sometimes termed White Monopoly Capital. Thus surprising breakthrough indicates that corporate-state degeneracy is now so extreme, that the truth will out.

Last week a conceptual barrier carefully constructed by elites since 2015 was suddenly cracked at the University of the Witwatersrand Great Hall by two of South Africa’s leading economic personalities: Pravin Gordhan, who served as a pro-business Finance Minister for seven years until being fired in March, and super-consultant Iraj Abedian, who in 1996 had co-authored the country’s post-apartheid homegrown structural adjustment programme. Two more solid bourgeois representatives would be hard to find.

They both came to Wits to attack the enabling role of auditing firm KPMG in the scandal involving the “Zupta” network, a fusion of the patronage system within President Jacob Zuma’s government and the Gupta brothers from India who over the past decade have successfully “state captured” several large parastatal corporations and government ministries.

However, instead of focusing on one firm, they made an unusually passionate case against what is sometimes termed White Monopoly Capital (though the two obviously wouldn’t name the beast as such given its controversial recent past). A few voices have made the same point, such as the leading trade union federation’s policy director Neil Coleman. In April, he asked, “Do we have to choose between a predatory elite and white monopoly capital?”

The moniker WMC comes from old texts drafted decades ago by SA Communist Party intellectuals, and is not related to Paul Sweezy and Paul Baran’s Monthly Review version. Indeed it was only in 2016 that Zuma’s son Duduzane – an extremely close associate of the Guptas – asked London PR firm Bell Pottinger to find “a narrative that grabs the attention of the grassroots population who must identify with it, connect with it and feel united by it.” The twitter bots and other machinery Bell Pottinger deployed did indeed popularise WMC, but then the backlash was so severe that last month, the firm suffered a mass boycott by clients disgusted when a hack of Gupta emails revealed the extent of the rot, and went out of business.

But now, finally condemning firms far beyond the Zupta nexus, Gordhan explained the deeply-rooted character of South Africa’s culture of corporate corruption. He despaired of internal reform and industry self-regulation, and concluded that “mass protest action” is required against big capital and parastatals, perhaps to the bitter end, such as Bell Pottinger experienced.

Protest against corporate injustice remains one of South Africa’s greatest strengths, the World Economic Forum indirectly acknowledged in last week’s Global Competitiveness Report 2017-18. Dating to 2012, this country’s workers have been considered the world’s most confrontational in the Swiss-based Forum’s survey of 14 000 executives.

On the other side of the class struggle, recall that PwC regularly names Johannesburg’s corporate rulers as the world’s most prone to corruption – especially procurement fraud, money-laundering, asset misappropriation and bribery – and that 80 percent of managers “do crime.” (PwC, an accountancy whose integrity in such matters was thrown into question at this year's Oscars, remains an exceptionally corrupt syndicate, and it takes one to know one. Even Bill Gates will testify to extreme corruption by PwC, and they fit perfectly into the Johannesburg milieu.)

As another example of breath-taking capacity to commit fraud against the South African state, more than a third of government’s $45 billion annual procurement budget is lost to corporate theft, according to the main Treasury official, Kenneth Brown, who quit the job earlier this year after death threats.

Pretoria politicians and bureaucrats are often blamed first for corruption, yet according to Transparency International (TI), they are rank amateurs compared to world-leading corporate chiefs. South Africa as a whole is perceived as 64th least corrupt out of 176 countries. And rebutting those whose fetish is Zupta malfeasance, TI also notes that the worst post-apartheid degeneration occurred during 1996-99 (from 23rd to 35th) under Nelson Mandela, and 2003-2008 under Thabo Mbeki (from 35th to 55th). Both adopted economic policies considered exceedingly friendly to WMC, e.g., dropping crucial exchange controls, casualising the labour market and lowering the corporate tax rate from 56 to 28%. 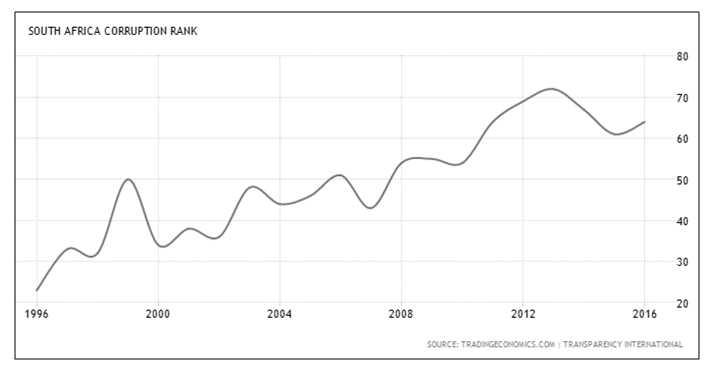 As a result, the International Monetary Fund reports, South African firms now claim average profits amongst the top five of all major economies, and the World Bank acknowledges that the highest-income 1% doubled their consumption of our national pie from 10-12% in 1990-94 to 18-20% since 2008.

Are corruption and inequality hard-wired into South African capitalism? Gordhan explained, “There’s a particular culture in the dominant part of business in South Africa, or some sections of that business, that we’ve inherited from our past, in the sanctions-busting era. Elements of that DNA are still persisting, 23 years later.” And he asked plaintively, “Are we able to actually say that firms are able to command the kinds of leadership that is required to change the culture after many years of doing things in a particular way, within large companies?”

Abedian, who recently quit insurance company Munich Re’s local board due to its ongoing KPMG contracts, confirmed: “There is an embedded culture where national resources are for the benefit of the rich… What we should be doing first is looking at the actions of those who sit on boards of insurance companies‚ banks and investment companies.”

In contrast to no-holds-barred truth-telling by Gordhan and Abedian, others retain an either/or Gupta/WMC bias. As social critic Jonny Steinberg complained in Business Day last week, debates he is having with (pro-Zuma) interviewees are frustrating: “It seems that we believe what we believe; any new evidence simply fills the contours of the story we are already telling. Mine is that an unholy alliance of politicians and bureaucrats in hock to a rich family has hijacked public institutions. Theirs is that global corporations have stolen SA.”

Such healthy hatred is by no means new. Since the origins of white-settler profiteering during the Dutch East India Company invasion in 1652, later amplified by the likes of Cecil Rhodes and Ernst Oppenheimer’s Anglo-American Corporation, resistances arose from grassroots, labour and nationalist (both Boer and Black) activists. Mostly the targets represented malevolent greed and often outright theft:

Instead, calls for the corporate death sentence ring out. Advises Daily Maverick columnist Richard Poplak: “We need to go after the likes of KPMG and Bell Pottinger, and bury them – not just because they’re complicit in Zuma’s state capture project, but because they’re shitty institutions that do shitty work and they deserve to die.” Wits School of Governance Director David Everatt warned these firms in The Conversation, “South Africans will hold them accountable, or if necessary, break them.”

After applauding last Wednesday’s national anti-corruption marches by labour and Communists, Gordhan convincingly argued to the Wits audience, “While debates like these are important, in our political culture it’s mass action that eventually counts, it’s the involvement of people who are willing to put some effort into bringing about changes, that actually makes a difference.”

And now as a first step, conceptual unity may crowd out the biased, toxic divide-and-rule framing by commentators mindlessly focusing solely on either WMC or the Zuptas. Last week’s surprising breakthrough by Gordhan and Abedian indicates that corporate-state degeneracy is now so extreme, that the truth will out.