20 years of trying to cover up the truth in vain 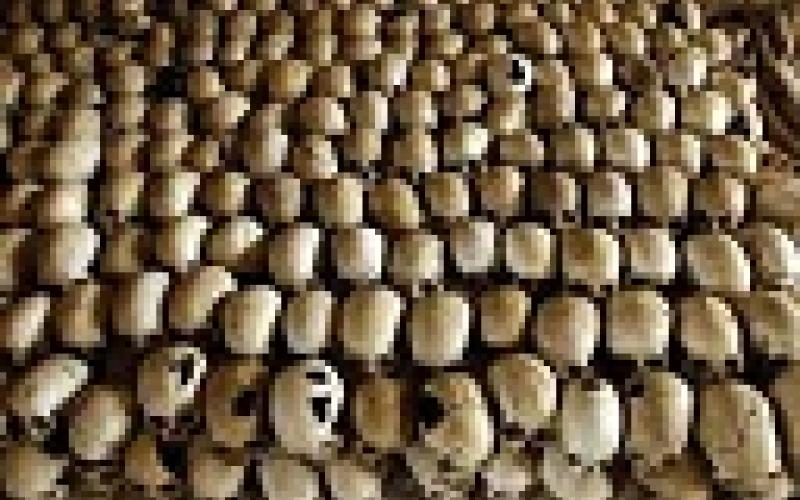 Despite powerful backing from the West and strong media influence, there have emerged some important facts which call into question the widely-accepted narrative of what really happened in Rwanda in 1994 and the identities of those responsible

To paraphrase a biblical passage, I would like to start this piece by writing that “for Congo’s sake I will not keep silent, for Kinshasa’s sake I will not remain quiet, till the Democratic Republic of Congo’s vindication shines out like the dawn, her salvation like a blazing torch”. Day and night I have used many platforms, including Pambazuka, to highlight the genocide that the Tutsi, whether they may also be victims of genocide, have committed in my country - the Democratic Republic of Congo - and I will continue to do so till my last breath.

I have not been the only one. Clara Delponte and Paul Kagame are increasingly at loggerheads. Delponte, a former Chief Prosecutor of two United Nations international criminal law tribunals; the International Criminal Tribunal for the former Yugoslavia (ICTY) and the International Criminal Tribunal for Rwanda (ICTR), fell out with Kagame, the Rwandan president, after she insisted that crimes committed by the Tutsi during the genocide should also be investigated. French Cameroonian investigative journalist Charles Onana has published many works about the real assassins of President Juvenal Habyarimana,who are still being shielded from accountability. As the spark which arguably ignited the inter-ethnic tensions into a full-scale genocide, the culprits of this crime must answer for a great deal.According to Onana, those he has identified are not included in the current list of “officially accused”. . Furthermore, the renowned French investigative journalist Pierre Péan, and American investigative journalist Keith Harmon Snow,have both claimed on factual evidence that the Rwandan Patriotic Front (RPF) and Paul Kagame were responsible for the assassination of Juvénal Habyarimana, and therefore responsible for sparking off the 1994 killings, This list is undeniably long.

In this special call for articles by Pambazuka about “Rwanda – 20 years on after the genocide”, I would like to take this opportunity to highlight, provide and share with Pambazuka readers the new facts about Rwanda and the Kagame regime that have emerged recently, which prove that the truth-covering efforts of the Kagame and Museveni regimes of the last 20 years have been wasted. They have been helped in this endeavour to obscure the reality of 1994 by powerful friends in high places in the West, including former US President Bill Clinton, White House national security advisor Susan Rice, former UK Prime Minister Tony Blair, the singer Bono, billionaire Howard Buffet, Evangelical Pastor Rick Warren, Rabbi Shmuley Boteach, billionaire Bill Gates, and so on (see: Judi Rever, “Paul Kagame’s trips to the West not worth the headache,” Digital Journal, Oct 17, 2013).

Despite such powerful backing and strong media influence, there have emerged some important facts which call into question the widely-accepted notion of what really happened in Rwanda, and the identities of those responsible. I would like to present the details of three such contentions.

First, and importantly from a Congolese perspective, it has emerged that in 1994, immediately after the RPF came to power in Kigali, the DRC’s main opposition leader Etienne Tshisekedi sent a telegram to Paul Kagame - then Vice-President - congratulating him for “having taken Juvenal Habyarimana out of power” (see: “Lettre ouverte) à M. Etienne Tshisekedi”, 30 June 2006, available at www.fomeka.net) Etienne Tshisekedi, a popular Congolese politician who has visited Kigali many times at the invitation of President Kagame, and who came second in the 2011 presidential elections, must not have made such a remark without supporting knowledge. He is not just a man of the street. He uncovered the truth, according to which what happened in Rwanda was a civil war: a Tutsi rebel movement backed by Uganda and Anglo-Saxon powers overthrew a Hutu dominated regime, notwithstanding the waves of inter-ethnic killings that were unleashed.

Second, Kagame is now under pressure from his powerful Western backers, who have finally realized that when Kagame boasted in a 2010 interview with the Financial Times of London that “Rwanda’s democracy is still the model for Africa”, that “model” does not square with human rights, let alone with democracy itself. (see: “Rwanda’s democracy is still the model for Africa”, Financial Times, 19 August 2010) Those same backers are now urging him to stop harassing, jailing and assassinating Rwandan opposition leaders, including Victoire Ingabire who was sentenced to 8 years in prison on 30 October 2012 for saying “Hutu too were killed during the genocide”, and whose sentence was increased to 15 years on 1 December 2013. Former Rwandan Intelligence chief turned opposition figure, Patrick Karegeya,was found dead in a South African hotel room, having been hanged or strangled by killers sent from Rwanda, four of whom were arrested in neighbouring Mozambique (see: “Karegeya Murder Suspects ‘Arrested’ In Mozambique,” 7 January 2014, available at Chimpreports.com).And former Rwandan army chief turned opposition figure Kayumba Nyamwasa was shot by a lone gunman in South Africa. Kagame’s Western backers are also privately advising him to hold political dialogue with the FDLR, the Hutu fighters roaming the hills of eastern Congo, who announced recently that they have laid down their arms and are ready to return to Rwanda provided the regime is open to dialogue.

In fact, many of Kagame’s backers have themselves been involved in political dialogue with those who present a threat to established order. The British who back Kagame held peace talks with the terrorist IRA in Northern Ireland; the Afghan regime which is backed by the United States is encouraged to hold talks with the Taliban; Nelson Mandela held talks with white apartheid leaders; the Congolese government held talks with “Tutsi Congolese rebels” – most of whom are Rwandans and Ugandans sent to the DRC to kill, rape and loot, despite whichKinshasa goes so far as to integrate them into the Congolese army. (…???).In this context, why should the Kagame regime be an exception? Inter-Ugandan dialogue, including with the LRA, and inter-Rwandan dialogue including with the FDLR, is the way forward for lasting peace in the region.

But this idea seemingly doesn’t appeal to Kagame. The so-called “stability” in Rwanda comes at the expense of Congo, where Kagame continues to stoke the fire inthe Congo, as Tony Blair put it in a 2013 Foreign Policy article which showed support to Kagame (see: “Stand with Rwanda”, Foreign Policy, 21 February 2013). Recently Kagame threw a tantrum over his erstwhile Western backers, calling them “former colonial masters who do not stop lecturing Africans”. However, he was later caught in his own trap when he boycotted the “Summit on Peace and Security in the African Continent”, convened by the French President François Hollande in Paris on 6 December 2013. For Rwanda, there was no question of attending the summit.

“Those who feel they still need the protection of the former colonial master will go to this meeting. This is not our case,” a close associate of Paul Kagame told Jeune Afrique (see: “Sommet sur la paix et la sécurité à Paris: le Rwanda décline l’invitation,”, 19 June 2013, available at Jambonews.net). A short while later, Kigali welcomed the invitation from U.S. President Barack Obama to attend an historic summit of leaders from across sub-Saharan Africa – the first of its kind – to be held in Washington in August 2014. ( “Obama to host summit of African leaders next year,” AFP, 30 June 2013). Kagame was indeed caught in his own trap – having declined the invitation of Frence, he nevertheless accepted that of Obama to all African Heads of State. What difference could there be in the invitations of the two Western masters? It is because the United States shields Kagame from being held accountable for genocide in Congo. After all, he is only playing the role of “an Anglo-American proxy” in Congo, as he has done “so well” for the last 20 years.

Thirdly, in the last 20 years, Kagame, Museveni, their cronies and even the foreign masters that arm them, have become rich thanks to predatory wars for natural and mineral resources in Congo. The so-called “post-genocide economic progress in Rwanda” is itself based on such predatory wars. At the same time, Museveni and Kagame have enjoyed a level of impunity, getting away with heinous crimes; of genocide, of war, and crimes against humanity both in Rwanda and in Congo, They have trampled on international law or bent it in their favour whenever it suits their interests at home and abroad. When it comes to extraditing “Congolese Tutsi rebels”, including Laurent Nkunda, Mutebusi, Runiga and others who have found refuge in Rwanda, rather than their ‘country of origin’, the DRCPaul Kagame invokes the Geneva Convention. Specifically, he lectures the DRC for not yet having abolished the death penalty, therefore he “cannot extradite Congolese Tutsi rebels to their country of origin only to be executed”. But allowing Congolese to be tried in another country reveals an hypocrisy in this judgment. After the murder of Karegeya, President Kagame warned Rwandans in the opposition camp that “There are consequences for betraying your country”. This doesn’t appear to be the case across the board in Kagame’s politics, as there are no consequences for the “Tutsi Congolese rebels” who had betrayed their own country.

There is a saying which goes: “Lie, lie, there will always be something left to lie about: the truth!” Recently, Joel Mutabazi, a former Rwandan officer and former bodyguard of Kagame, who stands accused of terrorism, formation of an armed group, murder and illegal possession of firearms, amongst other charges, sought political asylum in Uganda. Subsequently, he was unlawfully (and contra to the Geneva Convention) transferred from Uganda to Rwanda to face justice in his country. Among the other accused are several members of the opposition Rwandan National Congress (RNC) and eight students (see: “Paul Kagame ex-guard Joel Mutabazi rejects Rwanda trial,” BBC, 28 January 2014). Mutabazi pleaded not guilty at his trial, but like Patrick Karegeya, he faces a death sentence.Although the UN refugee agency (UNHCR) has condemned Kampala’s decision to extradite him as a “clear violation of the asylum principle”, the United States and Britain have remained silent in the face of such a flagrant violation of international law, Ironically, Kagame’s “special adviser”, Tony Blair, is in fact a lawyer who could be called upon to defend international law in this case.

Short of inter-Rwandan dialogue, 20 years after the genocide, Rwanda remains not only “an appeased, expansionist bloody dictatorship”, but also “a powder keg, a time-ticking bomb waiting to explode.”.

* Antoine Roger Lokongo is a journalist and Beijing University PhD candidate from the Democratic Republic of Congo.