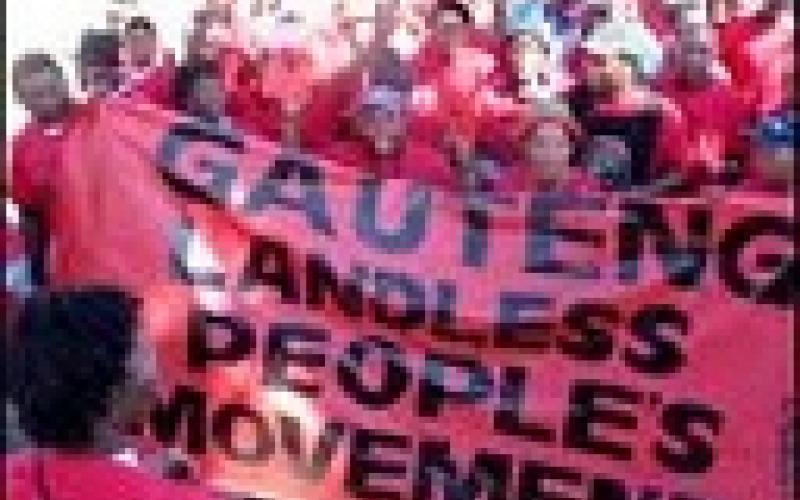 Over 11 million South African citizens are currently in debt, due to the entrenchment of aggressive capitalist policies. Most debt experiences, such as the author’s, are extremely painful. It is time for the country to rise up against big banking and end the cycle of debt.

I will not bore you with the run-up to my financial demise, suffice to say, ordinary life circumstances brought me to the doors of the Blue Bank’s financial advice department in 2011, not a fleet of Lamborghinis or a taste for Johnny Walker Blue.

I was already over-indebted and struggling to meet monthly debt repayments yet had been faced with urgent surgery costs for my mother for the removal of an aggressive tumour. My mother, a state pensioner, could have undergone the operation for free at a public health facility, but we had been warned of a year long waiting period. Time was not on my mother’s side, I explained to the bank’s immaculately dressed financial consultant. Despite explaining my existing financial difficulties, the consultant shrugged elegantly, advised strongly against debt counseling, and prescribed a personal loan, failing which, she said, there was nothing more she could do. In the absence of other options, I took the loan.

A year later, conflict with my sociopathic employer and unbearable working conditions left me unemployed, burnt out, stressed out, unable to receive unemployment benefits and extremely ill. It took me five months to recover, during which time my debt ballooned and I fell into arrears on all my accounts.

I dutifully obtained further advice from the bank, sought a ‘holiday’ period on my home loan and applied for credit consolidation. My credit consolidation application was lost and the process dragged on for three months as opposed to the ten-day period listed in the bank’s glossy brochures. My debt blossomed further, fed by penalties on stop orders when the bank had failed to cancel several fraudulent transactions, choosing to reward their own criminality.

When, out of desperation, I eventually lodged a complaint, my credit consolidation application was miraculously processed – and immediately refused – within days of the expiry of my home loan repayment ‘holiday’ period. Unable to cope with the sustained telephone harassment of almost twenty calls per day from the bank’s numerous debt collection call centres, I voluntarily placed myself under debt review.

At the time, I was working on a freelance basis while applying for full time employment. The extortionist repayment terms, which the debt counselor suggested were suitably ‘attractive’ to ensure the bank’s acceptance, quickly liquidated most of my movable assets. On one meal a day, my mother and I grew to know hunger and electricity disconnections, the loss of dignity in being poor. We experienced what it is like to have to accept handouts, the stigma of being in debt, the logistical acrobatics one is forced to perform when one finds that even the simplest tasks such as providing the bank with an affidavit requires money.

We were slowly starving but hey, I was repaying the debt! Well, until a non-profit organization reneged on payment for work undertaken, and I spectacularly defaulted on the freshly granted debt rearrangement court order. In blind panic I sought the debt counselor’s advice. Nothing doing, I was told, ‘You’re now in contempt of court.’

I frantically applied to the bank for a repayment leniency period while I continued to seek employment. I tried to sell my house, not knowing where we could live without a fixed, or even liveable salary. My mother aged before my eyes. Never a good sleeper, I utilized my now chronic insomnia to undertake work I was unable to do during the day – days were spent at the bank, on the phone to the bank, writing letters to the bank, preparing documents for the bank, bank call centres, bank attorneys, bank Bank Bank BANK – my life revolved around the bank. I now fully appreciate how the desperation of hungry mouths can feed petty and ‘social’ crime such as sex work.

After two signed offers on my property expired and I was prevented from taking up employment in another city, I gave up the unequal struggle of trying to extract crucial advice regarding the sale of my home from the faceless, departmentally hydra-headed, call-centre-dominated juggernaut. During this time I had lost a considerable amount of money and productive time and if we were to survive at all, it became essential to focus on making a living.

I managed to negotiate minimum repayment terms with the bank’s attorneys on my unsecured credit accounts – all of which had, by then, been handed over. I began to obtain a little more work and our electricity and telephone was not cut off quite so regularly. I even managed to buy a little more food.

Although I was paying back every cent I could manage, my financial recovery, however, was not fast enough for the bank.

In true big banking-style disregard for the law, one day I found court papers balanced on my postbox, an application for the execution of sale on my property. Standard Bank had finally responded to my queries of a year previously regarding the sale of my house and decided they would now take it. I had received no prior notifications, no lawyers’ letters, no demands, no summons, no account statements, nothing whatsoever in writing as is required in terms of the Just Administration Act. I had not been provided the opportunity of attempting to negotiate repayment terms, had been denied any right to defend myself and had indeed been most fortunate to have discovered the court papers before they blew away and we were faced with sudden eviction. I also learned that a thirty-year judgement had been awarded against me some months previously – again without my knowledge. A judgement essentially precludes one from all financial transactions and one may not even enter into a cellphone contract or rental agreement.

The nightmare got worse. The case was for some incomprehensible reason in the Pietermaritzburg High Court so I had to find urgent funds for transport. I discovered I did not qualify for legal aid because, although I was earning less than half the qualifying threshold, my house was valued at more than the R350,000 property limit, irrespective of the fact that my debt far exceeded its value!

With a little third-hand legal advice, I represented myself in court and managed to get the case removed from the roll pending my negotiation of repayment terms with the bank’s attorneys, or if agreement could not be reached, my obtaining legal representation.

That was a over a month ago and the bank’s attorneys have, to date, consistently ignored all attempts to follow the High Court’s directive. This is another déjà vu big banking experience, as the law, consumer and constitutional rights and due process are usurped in favour of corporate greed. Although the original loan had been repaid five times over, loan extensions, a criminal compound interest rate and the bank’s failure to enable the sale of my property since last year had led to the accumulation of a further R100,000 debt in less than a year. As I have not received a bank statement in eighteen months, I will employ our president’s Nkandla logic – that I cannot repay an amount I am unaware of.

At the same time this horror story was unfolding, I was informed by another of the bank’s call-centre debt collector attorneys that the amount I was currently repaying on one of my accounts had been deemed insufficient and that I was to increase the amount by a minimum of 250 per cent or the bank would seek to attach my movable assets.

Needless to say, addressing the latest economic implosion has again led to a loss of productivity and earning potential. Each struggling step forward through the morass of debt is accompanied by a rapid twenty-five backwards, as the bank’s unyielding bureaucratic supremacy and ‘ethic’ of greed pushes one further into the quagmire of total economic and personal devastation.

I cannot begin to fully describe the untold and apparently never-ending stress, indignity and misery that has, to date, been meted out by the Blue Bank. I will fight it to the bitter end because I literally have everything to lose. If the bank attaches my movable assets I will be prevented from working and unable to support myself and my mother. If the bank succeeds in its application for the execution of sale of my property, we will be evicted. The illegal judgement precludes my signing a rental, or any other financial agreement, even in the event that I could afford to pay rent. So I am fighting for my right not to be transformed from a productive human being into a life of vagrancy by a morally reprehensible, ethically bankrupt and deeply irrational financial system that has, from the outset, been designed and protected by the insatiable capitalist system for the benefit of a select few, while condemning millions to the misery of financial slavery and the trauma of economic violence.

With 11 million over-indebted South Africans, the numbers are in this instance very much on our side. Is it not time we fought for our economic freedom from this deeply corrupt system, nurtured by socially unjust, extractive, non-sustainable and economically harmful government policies, such as the National Development Plan and Operation Phakisa, by instituting some of the very same strategies we used during the fight against apartheid – the 1990s bond boycotts?

The simultaneous default of 11 million South Africans united in our rejection of a system that has proven to be nothing but usury would topple the power of parasitic financial institutions and ensure an end to the debt bondage from which, for many, death will bring our only escape.

* Vanessa Burger is a Dennis Brutus Community Scholar at the Centre for Civil Society based at the University of Kwa-Zulu Natal, a provincial member of the Democratic Left Front and Right2Know Campaign and works closely with organisations such as the South Durban Community Environmental Alliance, uBunye Bamahostel, the Poor Flat Dwellers Movement and the KZN Violence Monitor.