Stakeholders in the Côte d’Ivoire crisis 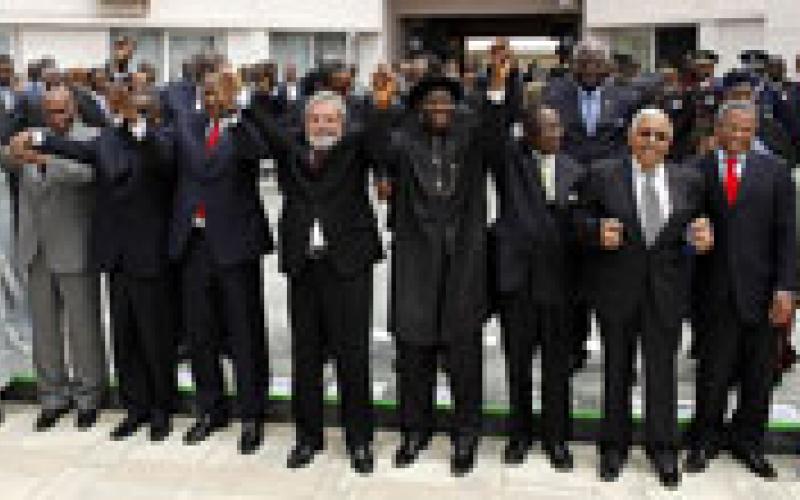 What is at stake in Côte d’Ivoire ‘are the consequences of French on-going colonisation and ruthless exploitation in connivance with unscrupulous local leaders of swathes of west and central Africa’, writes Sanou Mbaye, in an analysis of the five parties affected by the country’s post-election crisis.

In 2002 Côte d’Ivoire was rocked by a rebel uprising that partitioned the country into two parts, with the government led by President Laurent Gbagbo controlling the south, the rebels the north and the French army camping between the two. As a member of the Security Council, France managed to give this intervention the stamp of international approval under a UN mandate. In 2004, to avenge the death of nine French soldiers, the French army destroyed Côte d’Ivoire air defence and killed dozens of unarmed civilian demonstrators.

After a peace conference in 2005 a government of national unity was established. In November 2010 Laurent Gbagbo organised a much-delayed presidential election. His opponents were former president Henri Konan Bédié and former prime minister Alassane Ouattara. Once it was all done with, the country ended up with two stated presidents. Ouattara was declared winner by the independent electoral commission and the international community. Gbagbo was confirmed re-elected by the Constitutional Court. As a result, Côte d’Ivoire is now plunged in a deadly tale of five stakeholders.

The first stakeholder is the incumbent President, Laurent Gbagbo. During his ten-year tenure, Laurent Gbagbo sought to accredit his opposition to French neo-colonialism, and his socialist and anti-imperialist credentials while strengthening a new class of rich Ivoirians including the military. Their sources of enrichment were enhanced in 2006 when oil and gas revenues supplemented the traditional cocoa and coffee incomes.

The second stakeholder is Ouattara. In his professional background as head of the Africa desk of the IMF, governor of the West African central bank, prime minister of Côte d’Ivoire, and deputy-managing director of the IMF, Ouattara presided over the deregulation and the liberalisation of the Côte d’Ivoire economy. He liquidated Côte d’Ivoire’s valuable and strategic assets to French conglomerates at knockdown prices after the 100 per cent devaluation in 1994 of the CFA franc. Ouattara kept for years pocketing a double salary as a prime minister and central bank governor. He stopped this practice only when this was discovered and exposed by then opposition leader, Gbagbo, whom he jailed.

The third stakeholder is France, which granted independence to its former African colonies on condition that French troops remained stationed on their territories and they maintain the colonial CFA franc as their common currency. The CFA franc is convertible and its convertibility is guaranteed by the French Treasury which holds a right of veto over the management of the two central banks which issue the currency: BCEAO of the West African Economic and Monetary Union (WAEMU) and BEAC of the Central African Economic and Monetary Community (CEMAC), which would issue the currency. A capital control limits the free transfer of the currency to France. The credit that these central banks could extend to each member country was capped at 20 per cent of any country’s public revenue in the preceding year. These countries also signed up to an obligation to keep 65 per cent of their foreign exchange reserves in a ‘compte d’operations’ held at the French Treasury, as well as another 20 per cent to cover financial liabilities. According to figures published by Banque de France, foreign exchange reserves were estimated in 2008 at US$15.8 billion for CEMAC and US$9.3 billion for WAEMU. Except from the French mandarins from Banque de France and the Treasury, nobody, not least African officials, has access to these figures, and no independent audit has ever been carried out.

At a fixed-rate of 665.957 to each Euro, the exchange rate of the CFA franc is grossly overvalued. This is tantamount to an economic suicide when one considers that countries around the world battle to keep their exchanges rates low in order to make their exports competitive. But this suits French businesses, which can transfer all their earnings to France at this very advantageous exchange rate.

Another advantage of the system for France is that the enormous wealth that the African leaders accumulate in exchange of their adherence to such a system is recycled uniquely through the French banking system and duly recorded. So, every now and then, some shadowy civil society organisation would bring a corruption libel case against a few of these African leaders before a French judge. The latest targets of such proceedings were the late Omar Bongo of Gabon, Sassou-Nguesso of Congo or Paul Biya of Cameroon. The cases are then vastly publicised in French and world media before being suddenly dropped, an elaborate and not so subtle way of keeping these leaders under check.

The fourth stakeholder is the Ivorians themselves, a population under siege, governed by two declared winners of the same election, divided along ethnic and economic lines and fed with the venom of hatred, ready to massacre each other as they did in the deadly civil war they went through between 2002 and 2003.

The fifth stakeholders are two regional organisations: The African regional organisations: the African Union and the Economic Community of West African states (ECOWAS). They endorsed the international community’s stand in favour of Ouattara. France and the US were instrumental in shaping world opinion. France easily secured the EU members support. Jendayi Frazer, an African American, a former US Assistant Secretary of State for African Affairs in the Bush Administration and present US Ambassador to South Africa was instrumental in shaping the Obama’s administration stand. France’s former African colonies carried the day within the African regional organisations. This is comprehensible. What is less understandable is Nigeria’s readiness to spearhead a military intervention to dislodge Gbagbo when Cote-d’Ivoire is home to two million informal sector operator Nigerians in addition to the millions of other migrant workers who were attracted into Côte d’Ivoire to work on cocoa, coffee and banana plantations. They were the real architects of what was then dubbed ‘the Ivorian miracle’. Military intervention could entail the destabilising effects of seeing them flocking back to their countries of origin, not to mention the killings and the horrors already witnessed in the previous civil war.

But beyond all the rhetoric, the banning and condemnation, what are at stake in Côte d’Ivoire are the consequences of French on-going colonisation and ruthless exploitation in connivance with unscrupulous local leaders of swathes of west and central Africa. France has been able to phantom the politics and the economics of its former colonies so far. But, in a changing world and an increasing shifting of the world balance of power, its dominance will be more and more questioned.

* Sanou Mbaye is a London-based independent economist and the author of “L’Afrique au secours de l’Afrique” (Africa to the rescue of Africa).
* Please send comments to [email protected] or comment online at Pambazuka News.