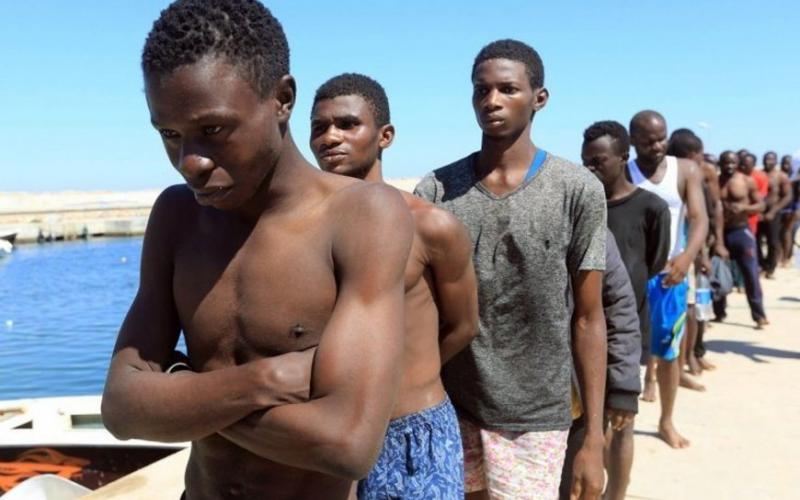 The CNN exposé on the heart-wrenching abominable slavery and the slave trade practices going on in Libya should be condemned with all the contempt it deserves. It depicts the activation and execution of the beastly instincts in man. While it is true that Black people in Libya generally have been subjected to second-class status even during the time of Gaddhafi, the situation was not as despicable and degrading as we find it now. What is happening constitutes cruel, inhuman, degrading treatment or punishment and, indeed, crimes against humanity. This is not only about the severity of the punishment that is meted out to the victims but also the exploitation of the powerlessness of the victims.

In this scenario, who do we blame? The West and African leaders are to blame.

There are three reasons to lay the blame on the West. First, we blame the West for orchestrating the overthrow of Gaddhafi and leaving a gaping hole in governance. Militias and militant groups like ISIS have filled this gap to perpetrate various levels of injustice and criminality on innocent citizens and worsening the security situation in North and West Africa as a result. Without learning from the case of Saddam Hussein and Iraq, the decision to overthrow Gaddhafi was premised on his dictatorial character but President Nicolas Sarkhozy of France, in particular, is exposed for having other ulterior motives to cause the overthrow of Gaddhafi.

In a joint letter to The Times of London, the International Herald Tribune and Le Figaro, Obama of the US, David Cameron of the UK and Nicolas Sarkozy vowed ‘to look to the future’ of Libya, saying, ‘We are convinced that better times lie ahead for the people of Libya, and a pathway can be forged to achieve just that.’

However, after orchestrating the regime change, things began to unravel. In one of his departing interviews, Obama admitted to the BBC that ‘failing to prepare for the aftermath of the ousting of Libyan leader Col Muammar Gaddafi was the worst mistake of his presidency.’ He also blamed David Cameron and Sarkozy for contributing to the ‘mess.’ Obama noted that ‘Sarkozy wanted to trumpet the flights he was taking in the air campaign, despite the fact that we had wiped out all the air defences and essentially set up the entire infrastructure.’ With respect to Cameron, Obama noted that Cameron had taken his eye off Libya after being ‘distracted by a range of other things.’  Thus, Libya was left to spiral out of control due largely to the inaction of America’s European allies. As we speak, the UN-backed government shares power with militias and militant groups, including ISIS cells and the slavery and slave trade are happening in the territories outside the control of the legitimate government.

The EU policy of containment is another factor accounting for the proliferation of slavery and slave trade in Libya. On 3 February 2017, the EU announced a deal in Malta aimed at curbing the flow of migrants from Libya through the creation of ‘safe’ refugee camps within Libya as a means to contain the flow of migrants. This included collaborating with the United Nations High Commissioner for Refugees (UNHCR) and International Organization for Migration(IOM) to process refugee application claims in Libya and to afford passage to Europe to those who qualify for asylum; and to have the rest repatriated to their countries of origin. A similar arrangement was made by France, Germany, Italy and Spain with Libya, Chad and Niger to help stem the flow of migrants and refugees into Europe, which agreement the French President called “the most effective and far-reaching meeting in months.” But this approach is nothing more than extending European borders into Libya, Niger and Chad and ‘outsourcing border controls to Libya’. These refugees have now become trapped ‘in a living hell,’ according to Oxfam and Action Aid, and have become the ‘slaves’ in the areas which are beyond the control of the UN-backed Libyan government.

The third reason is the continued exploitation of Africa by Europe and other developed economies, especially the former colonial powers, and their continued zeal and entrenched behaviour to dictate to Africa’s political leaders in return for pittance from Europe. The result has been the strangulation of the economies of most African states and subsequent increase in unemployment among African youth.

African leaders, both individually and collectively (through the African Union) also have their fair share of the blame for not paying attention to their youth. The youth have mainly been exploited by African leaders to do the ‘dirty’ jobs for them during electioneering campaigns in return for promises of ‘jobs for the boys’ after winning elections. Yet, after winning power, the leaders focus their attention on self-aggrandizement or other priorities. At best, their youth employment projects or national service schemes have become politicised and a fodder for high-grade corruption by party sycophants. The youth are consequently left to fight over annexing toilets to collect money, engaging in vigilantism, ejecting alleged political opponents from job opportunities which they consider as ‘political jobs,’ taking up arms to engage in militant activities and armed robbery or even joining terror groups like Boko Haram and ISIS. The rest are left with no other choice but simply to pack bag and baggage to seek greener pastures abroad through illegal routes which end them up in slavery, either in Libya or the Middle East. That has been the lot of most African youths to the extent that in Ghana, unemployed graduates have formed an Unemployed Graduates Association.

At the same time, the AU has adopted lip service to dealing with youth issues in general and youth employment in particular. Unlike the OAU era, African leaders, in the AU era, pledged to put the youth first. For that matter, in the AU Constitutive Act, the preamble proposes a ‘partnership between governments and all segments of civil society, in particular women, youth and the private sector, in order to strengthen solidarity and cohesion among our peoples’ [Emphasis added].

Consequently, the AU has established the Human Resources and Youth Division which is responsible for Africa’s Youth Agenda in the African Union Commission (AUC). The Division aims to, among others, “strengthen the young people through complete capacity building so as to prepare them for their meaningful contribution in the African socioeconomic renaissance.”

At various AU fora, including AU summits, the issue of the youth has received attention. The most recent one is the 28th African Union summit which took place in January 2017 under the theme “Harnessing the demographic dividend through investments in the youth.” According to Dr. Abdalla Hamdok, Executive Secretary, United Nations Economic Commission for Africa (UNECA), he is quoted: ‘Africa today is the youngest region of the world. The top 10 countries in the world with the youngest populations are all in Africa. By 2050, Africa will be home to 38 of the 40 youngest countries.’ He continues, ‘The pace, depth and scope of any society's development depends on how well its youth are nurtured, deployed and utilized. ... The youth bulge can be a huge opportunity for economic and social transformation. Alternatively, it can be a source of instability if countries fail to harness their potential through design and implementation of appropriate policies that unlock the demographic dividend and explore new economic opportunities.’

Yet, it has been much ado about nothing. The youth continue to wallow in disappointment and disillusionment. One would have expected the AU or ECOWAS to organise an extraordinary session to discuss the slave trade issue in Libya and take decisive action but we see our leaders sitting on the fence or merely issuing verbal condemnations.

The 5th EU-AU summit in Abidjan was focused on youth, migration, terrorism. One wonders if the theme is coincidental or it is to cement the Malta deal. If the EU were serious about solving this mess, which they are largely responsible for creating, it could have mounted a humanitarian intervention, which is supported by customary international law. They would not have hesitated to do the same thing if it was Europeans who were trapped in the Libyan hellhole.

Things have got to change.

* DR KWADWO APPIAGYEI-ATUA is a Senior Lecturer at the School of Law, University of Ghana, Legon. He lectures in Public International Law and International Human Rights Law. He can be reached on [email protected]