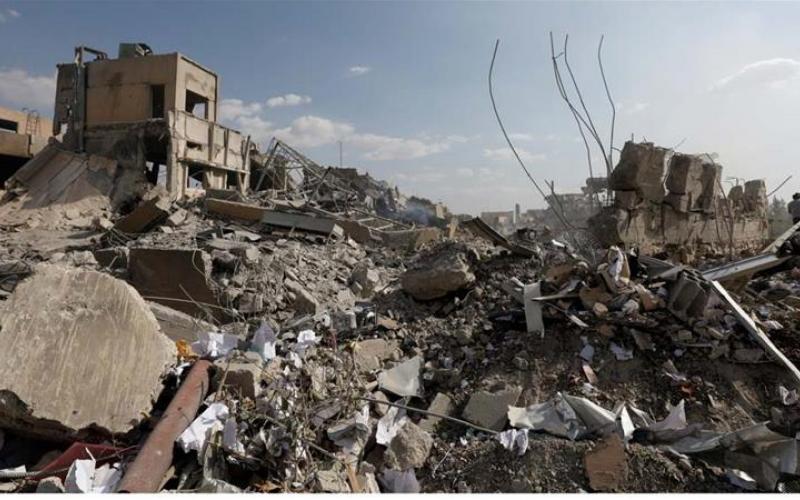 Imperialism again carries on a direct aggression against Syria. And, with its bloody claws, heinous imperialism again asserts its age-old axiom: Everything is and will be dominated; no effort for a peaceful life will be allowed.

The United States of America, the United Kingdom and France – an imperialist alliance – have bombed multiple government targets in Syria in an early (Saturday 14 April 2018) morning operation. And, with this act, the imperialist states have violated sovereignty of a country. The imperialists have shown their total disregard to a people’s right to pursue peace. All these are criminal acts. But, the mainstream media eager to search stories of “genocide” in corners of the world will keep silent following their imperialist-“democratic” tradition.

With its latest act of aggression in Syria, the imperialist axis announces: “I’m the truth, I’m the lord. It’s I, who fabricate fact. None of my utterances are false.”

So, Theresa May, the UK Prime Minister, said, “There was no practicable alternative to the use of force”.

Who has determined the “practicable alternative”? Who has made the judgment? Who has weighed alternatives – practicable and impracticable? It is imperialism. Was there authorisation of the parliament behind this act of Syria strike? No. Was its parliament consulted? No. The same was in US, the “great democracy” and a beacon for proxies of imperialism.

This is the imperialist accountability. It is imperialist democracy. Shall the world-famous mainstream media tell this truth? Shall it raise this question? Readers know best. What shall be the position of imperialist proxies – active and going to be active – in countries? No position? No position is a position; and that is confirmation of the fact that they are imperialism’s proxies.

Without any neutral, non-partisan investigation, the imperialist axis of war and destruction decided norms in international relations, sovereignty of countries, logic and rationality of aggression as they hit Syria with more than a hundred missiles.

The Syrian government said the incident of alleged chemical attack was fabricated. Russia said, “Strike on Damascus comes just as Syria got the chance for a peaceful future.

The moments depend on its requirements: profit, dominance, boost up war industry, manipulate taxpayers, play with domestic politics, disseminate message of fear to the entire world. James Mattis, US Secretary of Defense told reporters: “I believe it has sent a very strong message.”

The process is, broadly, the same: organise proxies, essentially mercenaries, soldiers – unarmed and armed, hire a bunch of so-called progressives, create a clumsy situation, arrange the flow of some blood, obstruct efforts for reconciliation, hinder political process in the targeted country, continue with the fabrication of information, provoke hostility, organise calls for imperialist intervention named the “Responsibility to Protect” – the right to protect, and then strike. Libya has experienced this. Syria is experiencing this. There is every possibility that some other countries will experience this.

In the case of the Syria strike, the imperialists arbitrarily designed its logic; and scope for investigation was quashed.

What happens in cases of other countries targeted by imperialism for intervention? Does it accept statement provided by authorities of those countries? Everyday news bears the answer.

But, today’s world is different to some extent from the world of the 1990s and the following decade.  Russia’s statement indicates the change in reality. The statement issued through Russia’s ambassador in US said, “Such actions will not be left without consequences”. During imperialist’s Iraq and Libya invasions, such warning was absent. But, in future, imperialism will have to get more warnings, and effective warnings.

The changing realty compels Theresa May to say, “The strikes are not about regime change”.

Imperialists want regime change in Syria. But, they have to publicly pronounce the opposite. It is for public consumption, and for staying safe in the arena of international affairs.

On the Syria aggression, the US president said the purpose was “to establish a strong deterrent against the production, spread and use of chemical weapons”.

The purpose, in real terms, is to establish a strong deterrent against moves that may hurt the murderous imperialist axis, characterised by the Trump-May-Macron alliance.

There is another indication: Imperialism has turned reckless. Imperialism doesn’t care about the United Nations (UN). Imperialism goes to the UN whenever it is confident that the world body can be manipulated. Prior to Iraq and Libya invasions, imperialism tried to get the UN seal of approval on it design for intervention. It even tried to seek approval from a block of countries of the region. But, in this case of the Syria strike, it didn’t wait. Shall imperialism be pulled to the court of justice? There is no possibility. This is the reality, and this reality is to be taken into consideration.

Homes of the imperialist axis play some role to make them reckless. It is their problem in homes. All the countries in the axis are den of serious economic and social problems. Imperialists are to subdue those constituencies. Imperialism’s so-called war on terror is taking its share from the warrior. And, the share is big enough. Steam is not out of it. However, it is over-stretched. As a way out, imperialism needs war. So, it will create war after war.

Countries should be cautious. There are signs of the return of imperialist intervention in countries of the global South.