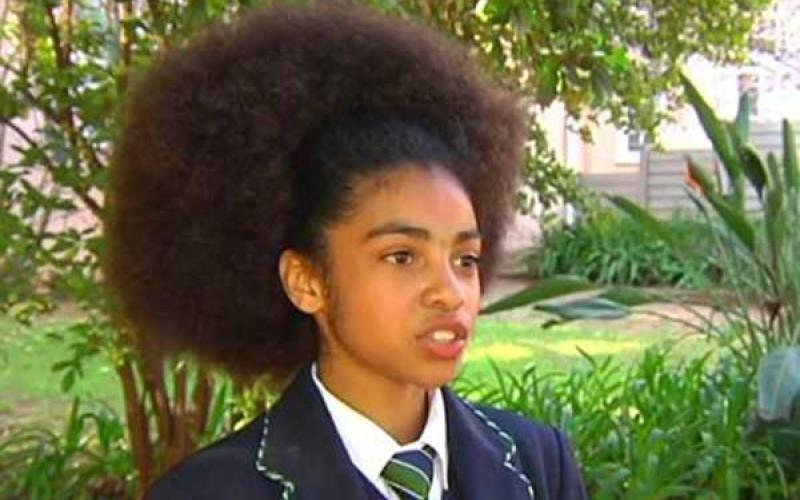 To call a conscious protest by schoolgirls resisting racism a “tantrum” is myopic. Although apartheid has long been legally dismantled in South Africa, racism still exists and whiteness there still means being part of a privileged group; one whose traditions, religion, food and appearance - including hairstyle - is still the default norm.

It’s hardly surprising that BBC’s 2016 most influential women in the world list included Zulaikha Patel, one of the girls that led the protests at Pretoria High School for Girls (PHSG). She has reminded us that barely a decade after Indie Arie proudly sang, “I am not my hair”, matters of black hair are still very much political. The gains made by the Black Pride and Black Consciousness movements which sought to instill a sense of pride over Black aesthetics are perpetually challenged in institutions with policies that uphold racial hierarchies.

A range of institutions continues to work together to marginalize Black women’s hairstyles and encourage them to invest in products that will rid them of their ‘kinky, curly, unmanageable’ hair - they are urged to embrace wigs, weaves, or chemically ‘straightened’ hair. Doing so provides them access to jobs, education and social inclusion in predominantly white institutions. Black hairstyles thereby come to signify whether one wants to be included (read “conform”) or excluded (read “militant”). Patel’s protest is entangled in historical attempts to police Black women’s hair. At PHSG, Black students have complained that they are not allowed to wear afros, are encouraged to straighten their hair, and were subjected to racial slights by staff [1]. As a PHSG Old Girl, I feel obligated to respond, as it may be a useful discourse for many grappling with hair, Blackness and whiteness in the ‘New South Africa’.

PHSG, a leader in multi-racial education

PHSG was one of the first schools in the province when it came to progressive and inclusive race policies – it was a trailblazer during its time. It sought to finally realize its founding principles of admitting students from all races by being one of the first schools in Gauteng (Northern Transvaal) to admit Black students during the apartheid era – at a time when it didn’t legally have to - and a time when racially segregated schools were not only normal but legal. So, in August, when the allegations of racism started to appear in the media, I was taken aback that it was happening at that school. The school has now become the center of a national debate about lingering racialized policies, exposing polarized racial discords.

When I was a pupil at PHSG in the 90s, the school’s code of conduct did not specifically address Black hairstyles. At the time it was a one-size-fits all policy that did not specifically mention what is typically considered “Black hairstyles” [2]. They tried their best to apply existing rules to us. Our hair battles with the administration were for them to allow braids and cornrows, which they eventually allowed. They encouraged Black students to have “natural” hairstyles (which included afros), thereby discouraging any type of “fancy” or expensive hairstyles. This seemed largely due to the need for students not to “stand-out” and conform but did not seem racially motivated. The rules that were applied to us were based on an interpretation of their general hair policies, which posited that hair should not be “neat” and “tidy”.

To place these rules in context, there were only a handful of Black girls at PHSG at the time - this was in the early 1990s before apartheid was dismantled. Malawi was the only African country to still have diplomatic relations with South Africa. Therefore Malawi’s envoys had diplomatic immunity which accorded them the “privilege” of being able to live in white neighborhoods. As such, my parents sought to admit their children in the schools that were closest to where they lived and where their children could receive the impeccable education that PHSG could provide.

Following school-wide deliberations that culminated in a vote to decide to become a racially “open” model C school, my sister, Thoko, became the first Black student at the school - I joined over a year later along with other Malawian students. Therefore, a written policy meant for just a handful of us was probably not necessary. The changing demographics of the school over the years probably necessitated a more concrete hair policy.

This has changed. The current code of conduct at PHSG has stipulations for braids, cornrows and other hairstyles that are worn by all students [3]. It doesn’t mention afros explicitly - it neither bans nor permits them. Therefore, some people wrongly believe the policy cannot be racialized because it applies across the board to students of all colors.

Reaction to the protest

An opinion piece by Lelouch Giard captures the lens with which a significant number of white South Africans analyzed the students’ complaints. Giard posits that the entire controversy simply and neatly boils down to a matter of playing a “race card” because a handful of Black students don’t want to learn or follow the rules everyone is subjected to and thereby are inclined to arbitrary call ‘racism’. In sum, it holds that in a post-racial South Africa in which colorblindness prevails,  Black students would rather “throw tantrums” over exaggerated accusations and shout ‘racism’ rather than improve their socio-economic status [4]. He fails to acknowledge that although apartheid has long been legally dismantled in South Africa, racism still exists and whiteness there still means being part of a privileged group; one whose traditions, religion, food and appearance (including hairstyle) is still the default norm and is not ‘othered’. His backlash to their protests seems reminiscent of ideas shared in popular movements such as Trumpism, Brexit and other white identity politics that have recently gained traction [5].

Giard acknowledges that the afro symbolizes Black identity and expression. However, he doesn’t mention the political connotations which link the style to marginalized, non-conforming revolutionary women such as Angela Davis or Winnie Mandela. Rather, he links the style to unsubstantiated political connections between hairstyle and bad behavior when he addresses the reasons Patel may have left her previous schools – “The question arises: is it really just because of her hair, or her attitude (possibly as relating to her hair)?” He goes on to question her credibility because of it, and uses her attitude as a basis for invalidating her experiences at the school. He also objectifies her from the start of the article by introducing her as a "a girl who calls herself ...." which already indicates his own subjective attitude towards her.

Giard’s tendency to focus on the victim does not acknowledge that systemic race discrimination still exists in the nation’s institutions and may continue to impact Black girls. Rather than acknowledging the possibility that she may have been subjected to racist comments by some of the staff members, he largely discredits her account and that of the girls that supported her. In fact, he seems set on proving that they were never wronged.

Alumnae have supported her claims arguing that some of the administrative staff in the school are interpreting the rules to mean that they can’t wear afros and need to straighten their hair. They note feeling harassed and being subjected to racial slights by faculty such as being called “monkeys” and being told that their head looks like there is a “a nest” on top of it. Although such behavior is unacceptable by any standards, Girard should, ideally, give equal attention to an administrative climate at the school that potentially allows teachers to act with impunity. Instead, he points to the social pathology of the Black alumni. He calls their experiences largely “imagined” or “exaggerated”. He also calls them “unsubstantiated” accounts. However, experiences of discriminatory harassment do not need his legitimization (or anyone else’s) to hold in a court of law.

If several girls experienced micro-aggressions by authority figures over several years, who is Giard to delegitimize their lived experience by telling them that they are wrong and are treated the same as everyone else? And even if they are treated the same, that comes with its own set of problems. In sociology and law disparate impact is when treating people the same results in a different impact for some groups. This can be liked to a school in France banning head covering for all its students, thereby unfairly impacting Muslim girls wearing hijab – or height requirements in the military which discriminate against women or having a single hair policy.

Lastly, to call their protest a “tantrum” when the issues that the girls are dealing with are real adult world problems is myopic. Black Women worldwide have to wonder if their hair will cost them a job regularly. It is an issue woman in the US military were dealing with as recently as two years ago and one that the US federal court recently ruled on. It’s not just a schoolgirl concern and they should be applauded for their consciousness, instead of being chided for seemingly not following the proper channels for complaints. Yes, protests should be the last recourse but that assumes that the girls never complained. In fact they did – and when they did, they were labelled as being too focused on politics and race [6].

Although hair was at the center of the issue, their concerns dealt directly with their right to gather, speak in their own languages and to be taught in an environment that is not hostile. Reducing this issue to race-baiting is short-sighted. All South Africans need to acknowledge that discrimination still occurs and still needs to be dealt with and in some institutions to be fully eradicated [7]. It can even pops up its ugly head in the nation’s progressive institutions because racism can’t be legislated away.

Although many alumnae are rightfully upset about the broad brush which the school is being painted with in the media, the incident may just be good for the school - the changes that it will make will once again make PHSG a leader when it comes to maintaining safe spaces for all leaners in South Africa’s schools.

* Sitinga Kachipande is a Malawian blogger and PhD student in Sociology at Virginia Tech with a concentration in Africana Studies and Global Political Economy. She has an MA in Pan African Studies and an MBA.  Follow her: https://twitter.com/MsTingaK