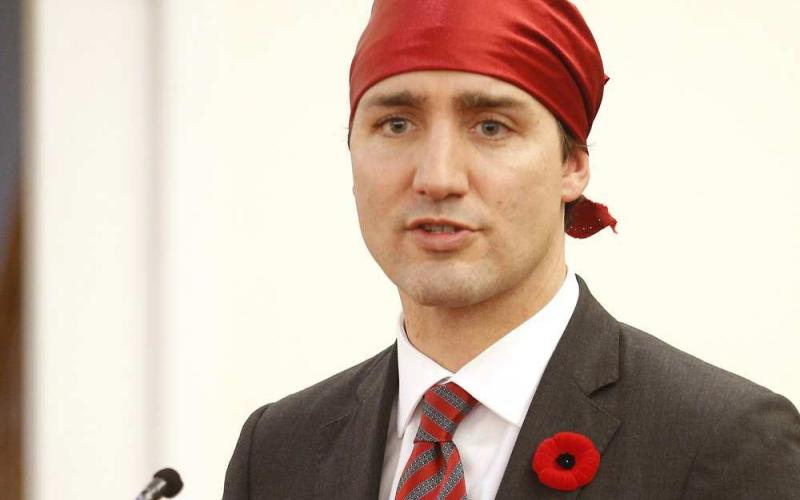 Canada is attempting to project itself as a friend of Africa, Haiti, women and the world. If he is to be believed Prime Minister Justin Trudeau is a friend of all God’s children. But is he?

Trudeau’s first cabinet was Africanless. Africans in Canada, from the continent and here questioned this move.  Many felt that the younger Trudeau took us for granted because his father Pierre Elliott Trudeau (October 18, 1919 – September 28, 2000) “opened” the doors for immigrants from the Caribbean and Africa. Eventually he did appoint Somali Toronto MP Ahmed Hussen to the federal cabinet as immigration minister.

Trudeau did appoint Indian-born Sikh Harjit Sajjan, MP for Vancouver South, minister of defence. Sikhs have a significantly different history in Canada than Africans.  The Sikh community is represented in all professional fields: medical, legal, technological, academic. Africans came kicking and screaming to the Western Hemisphere. Recently he has been questioned about “fibbing” about being the leader of a battle in Afghanistan. Sajjan said yearly defence spending will swell by more than 70 per cent, from $18.9 billion in 2016-17 to $32.7 billion in 2026-27. He promised $62.3 billion in new spending over 20 years.

Amarjeet Sohi is an Indian-Canadian politician, currently the Member of Parliament for Edmonton and the Minister of Infrastructure and Communities in the federal cabinet. He narrowly beat out strong community advocate Nigerian-born Chinwe Okelu.

Maryam Monsef is an Afghan Canadian politician, a Liberal member the House of Commons in 2015. She was previously the Minister of Democratic Institutions and president of the Queen’s Privy Council for Canada until January 10, 2017.

Monsef has not had an easy ride. According to Wikipedia: “Monsef has been criticized for stating that she was born in Afghanistan, when in fact she was born in Iran. When this was revealed in September 2016, some commentators pointed out that this could lead to revocation of her Canadian citizenship and potential deportation, while others have criticized the absurdity of the present law or decried the importation of birtherism into Canadian politics. In an interview at that time, former MP Dean Del Mastro said that political workers in the 2014 municipal and 2015 federal campaigns knew she was not born in Afghanistan, but chose not to make an issue of it.”

Canada’s role in Haiti should never be forgotten. Back in the day I discussed Haiti on the Black Commentator in an article: “Canada's Crimes Against Haiti” in   the October 27, 2005 issue. After reading Yves Engler and Anthony Fenton’s  volume ‘Canada in Haiti’, I pointed out: “The chapter ‘Responsibility to Protect or A Made in Ottawa Coup?’ points out the coup against Aristide was actually planned on Canadian soil. From January 31-February 1, 2003, Canada’s Secretary of State for Latin America and La Francophonie, Denis Paradis, played host to a high-level roundtable meeting dubbed, The Ottawa Initiative on Haiti. Surprise, surprise, no representative of Haiti’s elected government was invited. However, Otto Reich, then President George W. Bush’s appointee as Assistant Secretary State for the Western Hemisphere, was in attendance. Paradis leaked the fact that this meeting took place to journalist Michael Vastel, who reported the meeting in the March 15, 2003 edition of L’Actualite magazine. Another chapter, ‘Using NGOs to Destroy Democracy and the Canadian Military Connection’ exposes the shameful role played by many Canadian NGOs.”

Trudeau is a self-proclaimed “feminist”. The court is still out on this matter. A recent article in the British based Guardian newspaper questioned the Canadian Prime Minister: “A slight note of exasperation crept into Justin Trudeau’s voice, suggesting that this was a topic he had broached many times before. ‘I’m going to keep saying loud and clearly that I am a feminist until it is met with a shrug,’ he declared to an audience at the United Nations in New York.”

His words sparked delight around the world. But one year on, Trudeau’s heady promises have run into the realities of government, prompting the question: has electing a self-described feminist to helm of the country translated into real change for Canadian women?

Canada’s prime minister is moving the Great White North further to the right on foreign affairs. Trudeau’s father Pierre Elliot Trudeau opened the doors to draft resisters including myself who refused to fight against the Vietnamese people. I saw Africans in America and the Vietnamese as colonial subjects. Africans in the United States were colonized by Uncle Sam and the Vietnamese by the French. Wiki pointed out: “While Canada had previously participated in military action against Iraq  in the Gulf War of 1991, it refused to declare war against Iraq without United Nations approval.

The Iraq War began with the United States-led 2003 invasion. The Government of Canada did not at any time formally declare war against Iraq, and the level and nature of this participation, which changed over time, was controversial.

Prime Minister Jean Chrétien said on 10 October 2002 that Canada would, in fact, be part of a military coalition to invade Iraq if it were sanctioned by the United Nations. However, when the United States and the United Kingdom subsequently withdrew their diplomatic efforts to gain that UN sanction, Jean Chrétien announced in Parliament on 17 March 2003 that Canada would not participate in the pending invasion.”

However, this is not the full story. The “Big White Folks” as Paul Robeson called them speak with forked tongues. “Nevertheless, he offered the US and its soldiers his moral support. However, according to classified U.S. documents released by Wikileaks, a high-ranking Canadian official may have secretly promised to clandestinely support the invasion. Two days earlier, a quarter million people in Montreal had marched against the impending war. Major anti-war demonstrations had taken place in several other Canadian cities.” Chrétien’s moves had more to do with the growing opposition to the invasion than his political morality.

The not so great white north has a checkered history in the African continent. Canada joined the imperialists and played with the white checkers. They played a significant role in the assassinations of Patrice Lumumba, Maurice Mpolo, and Joseph Okito on January 21, 1961. Ottawa came up on the wrong side of history on the question of the Congo. Yves Engler author of the illuminating volume, Canada in Africa: 300 years of aid and exploitation, pointed out: “Siding with Washington, Ottawa promoted ONUC) and UN Secretary General Dag Hammarskjold’s controversial anti-Lumumba position. ONUC was established in July 1960 to ensure the withdrawal of Belgian forces. 1,900 Canadian troops participated in the UN mission between 1960 and 1964, making this country’s military one of its more active members. There were almost always more Canadian officers at ONUC headquarters than those of any other nationality and the Canadians were concentrated in militarily important logistical positions including chief operations officer and chief signals officer.”

Canada opposed anticolonial struggles in Africa, supported apartheid South Africa and Idi Amin’s coup against Milton Obote (December 28 1925- October 10, 2005) who had led Uganda to independence in 1962 from British colonialism. He was overthrown by Amin in 1971. Canada played a role in the ousting of Lumumba in the Congo by the CIA, Belgium and Mobutu Sese Seko Kuku Ngbendu Wa Za Banga aka Joseph Mobutu and Ghana’s Kwame Nkrumah.

The Great White North pressed African states to follow neoliberal policies, which have benefitted Canadian corporations. The Canadian International Development Perform points out: “Canada is a global mining giant and a leading player in Africa’s mining sector. 70% of the equity capital raised globally by the mining industry was raised on the Toronto (TSX) and Venture (TSXV) exchanges. Of the $10.3 billion in equity raised for mining on the TSX and TSXV in 2012 $1.9 billion or 18.5% was for projects in Latin America while another $1.7 billion or 16.5% was for projects in Africa.”   Canada played a role in the violence the Congo, Rwanda and Somali.

Canada does have a Black Radical Tradition. However, we cannot expect Corporate Canada or the Black Misleadership Class to tell the story. That is on us on the Black Left.