Congo: An enterprise managed by the United Nations Security Council

An Interview with Economist Jean-Claude Maswana 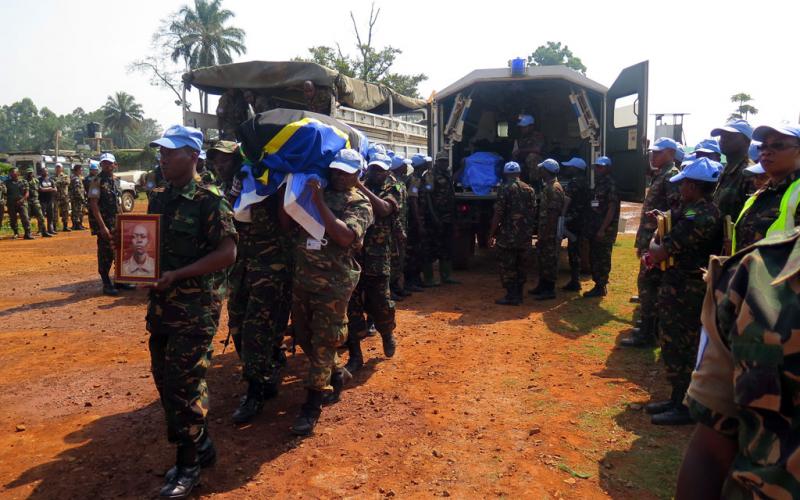 Patrice Lumumba, the Democratic Republic of Congo’s independence hero and first Prime Minister, famously wrote to his wife Pauline from captivity in 1960, shortly before his assassination: “We are not alone. Africa, Asia, and the free and liberated peoples in every corner of the globe will ever remain at the side of the millions of Congolese who will not abandon the struggle until the day when there will be no more colonisers and no more of their mercenaries in our country.” But is anyone on the side of the Congolese now?

The Democratic Republic of the Congo (DRC) is the heart of Black Africa. Millions of Congolese have been murdered, massacred, enslaved, robbed of their resources, and driven from their homes since the Berlin Conference gave the “Congo Free State” to Belgium’s King Leopold II as his personal property in 1885.

Patrice Lumumba, the DRC’s independence hero and first Prime Minister, famously wrote to his wife Pauline from captivity in 1960, shortly before his assassination: “We are not alone. Africa, Asia, and the free and liberated peoples in every corner of the globe will ever remain at the side of the millions of Congolese who will not abandon the struggle until the day when there will be no more colonisers and no more of their mercenaries in our country.” But is anyone on the side of the Congolese now?

I spoke to Jean-Claude Maswana about the latest waves of aggression under current Congolese President Joseph Kabila. Maswana is a Congolese native and economics professor at Tsukuba University, Japan.

Ann Garrison: Professor Maswana, the Congolese never seem to get a break. On 7 December 2017, Tanzanian peacekeepers who were actually trying to keep the peace in Congo’s Beni Territory were attacked. Fifteen were killed, more than 50 wounded. Then, on Christmas Eve, the Ugandan Army started shelling Beni Territory from across the border and Ugandan attack aircraft crossed into Congolese air space and started dropping bombs. On New Year’s Eve, the Congolese army attacked a peaceful protest march led by the Catholic Church. Is anyone on the side of the Congolese now?

AG: Not even the Catholic Church? Isn’t it the second most powerful institution in Congo, where more than half the population is Catholic?

AG: OK, let’s step back and explain that. Kabila’s term was to have expired in December 2016, but he didn’t organise an election and he didn’t step down. Civil unrest broke out, and eventually this agreement mediated by the church was signed. What did the agreement say?

AG: But then the Catholic Church did lead this peaceful protest march on New Year’s Eve, in Kinshasa and other cities right?

JCM: That could be seen as siding with the Congolese people. Nevertheless, to be honest, I don’t personally think the Church was really siding with the people, as it should have then. I don’t want to be seen as too critical of the Church as they have made some efforts, and some of them were beaten by soldiers on the front lines of the New Year’s Eve march, but the objective of that march was unclear. The Church should have taken a clear stance and refused to accept anything but Kabila’s departure from power. No more compromise should have been made after he once again failed to organise elections. The objective of the march was to pressure Kabila to implement the 31 December 2016 agreement, but he had already failed to do that.

AG: The Congolese army, the president’s republican guard, and the military police are heavily armed against the unarmed population, so what could the Catholic Church have done but organise a nonviolent march?

JCM: A peaceful march doesn’t change the situation on the ground. It doesn’t change the balance of political or military power. The Catholic Church could bring about such a change if it stopped recognising Kabila’s illegal and unconstitutional presidency as legitimate. This would change the political balance of power and hopefully lead the way to the negotiated creation of a transitional government until free and fair elections could be organised in a reasonable time frame.

Unfortunately, the Church isn’t even close to refusing to recognise Kabila’s legitimacy. So it’s leaving the political balance of power untouched and Kabila is happy with this outcome.

AG: That’s very interesting because you’re saying that another kind of nonviolent protest is possible.

JCM: Yes, there are other forms of nonviolent protests that are not being implemented by the opposition or the Church.

AG: OK, at this point, it looks like the European Union, the United States, all the North Atlantic Treaty Oorganisation powers, and China are happy with the chaos and the mayhem. They’re not disturbed enough to do anything about it. Russia doesn’t seem to be very involved. And the United Nations (UN) Security Council has never been willing to acknowledge Rwanda or Uganda’s presence in the Congo, which is a violation of national sovereignty that the UN Charter would oblige them to stop if they did. So it’s really up to the Congolese people, right? There are no other significant players on the global chessboard who are willing to intervene on their behalf.

JCM: Yes, that’s an accurate description of the situation as I see it. The Congolese people are alone in their struggle against Kabila. Russia, China, and all the other powerful international players support Kabila because they have ongoing deals. There is an unspoken consensus of the powerful players for leaving the situation on the ground as it is. That’s the sad fact.

AG: So everyone’s getting the resources that they want, and the Congolese people continue to be murdered and massacred without any real intervention on their behalf. MONUSCO, the UN peacekeeping operation in the DRC, just seems to manage the conflict at a cost of more than US$ 1 billion annually, most of which is paid by the West. On 7 December 2017, well-armed troops wearing Congolese uniforms actually attacked Tanzanian peacekeepers who were taking their mission seriously—trying to protect the population and stop the aggressors in Beni Territory—in a clear warning that real peacekeepers would not be tolerated.

JCM: Exactly. My reading is that the very same interests behind the murder of two UN experts earlier in 2017 were behind the attacks on the Tanzanian peacekeepers. These attacks on UN experts and peacekeepers and Kabila’s unconstitutional grip on power are both part of the same movie by the same “producer.” The UN Security Council issues toothless, knee-jerk calls for justice and democracy in response to these crimes but nothing is done. US Ambassador to the UN Nikki Halley went to see Kabila and told him he’s obliged to organise elections in December 2018.

AG: Since you’ve told me several times now that there are no great powers willing to intervene on behalf of the Congolese, I looked back at the moment in Congo’s history when King Leopold’s enforcers were committing unspeakable atrocities to extract rubber and whatever other resources from the “Congo Free State,” which the Berlin Conference had given to him as his personal property in 1885. There was so much international outrage that Belgium finally took over, creating the Belgian Congo. That was no triumph over colonialism, but there was so much outrage about King Leopold’s brutality that the international community of the time finally reacted. Is anything like that conceivable now?

JCM: I don’t think so because the context is very different. Leopold II was more powerful than those who gave him the ownership of the “Congo Free State.” Unlike King Leopold the owner, Kabila has been given an assignment. International interests have decided to outsource Congolese resource extraction to him, and he is in turn allowed to grab his own share of the nation’s wealth. Kabila acts as the head of the local affiliate in a much larger multinational enterprise. So far as its executives are concerned, he and MONUSCO are both doing a great job, fulfilling their de facto mandate. Never mind what they say out loud in the UN Security Council, on UN Web TV, or through UN News. This multinational enterprise has been at Kabila’s side ever since he took power ten days after the assassination of his less compliant, adoptive father, Congolese President Laurent Désiré Kabila, on 16 January 2001.

AG: So, basically, Leopold II really did own and control the “Congo Free State” as an individual, as a king, but Kabila’s just an apparatchik.

AG: OK, so any real outrage would have to go beyond the apparatchik to the multinational enterprise, and that’s unlikely.

AG: Early on you explained that the only real agency on behalf of the Congolese people is in the hands of the Congolese people, who would themselves have to stop recognising Kabila as the rightful president. Is there anything that those of us in other parts of the world who are horrified by what continues to go on there can do to support them, even if we’re far from the centers of power?

JCM: Yes. First, just continue to do what you’ve been doing: spreading information and raising awareness among US citizens. The end goal could be to make the DRC tragedy an issue at some electoral level. Next, join and support the networks of those fighting the killing machine in DRC. Also, bring some international and different perspectives to the conflict to help us, the DRC people, expand our understanding of the tragedy. Most of the time, the most vulnerable and victimised in the DRC tragedy have a limited or incorrect understanding of who is really behind it, especially of who is behind it from outside the DRC.

AG: The information question reminded me of something. Just before the peaceful march on New Year’s Eve, Kabila had the Internet and SMS messaging switched off. Has that been restored?

JCM: Yes, the SMS and Internet are back, but even so, the control is in place. The monitoring system is in place; they have the technology, provided by some companies that I’m not going to name here. They have the technology in place and they’re monitoring everything and, from time to time, randomly checking people’s smart phones or other devices, or forcing people to open up their Facebook or Whatsapp accounts, for example.

AG: High tech surveillance in a nation where less than 10 percent of the population have electricity at home but as many as 23 percent may own cell phones.

AG: To be continued?