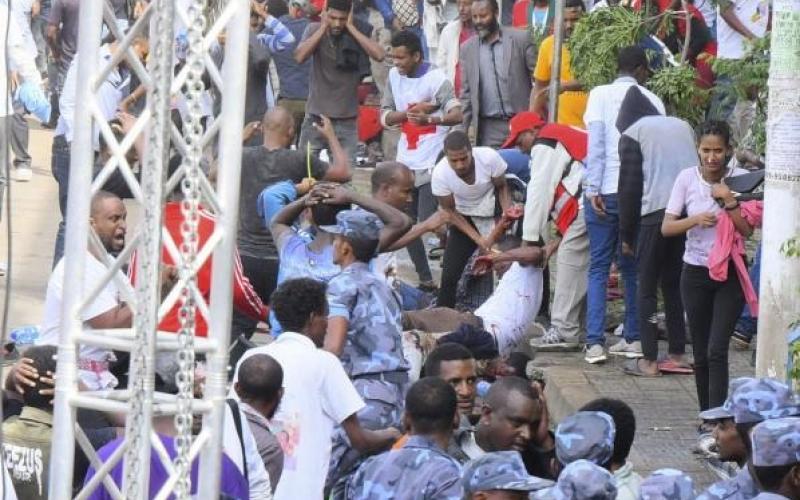 From the Horn to Southern Africa similar destabilisation efforts were met with condemnation over attacks on political rallies.

Two separate grenade attacks in the Ethiopian capital of Addis Ababa and the Zimbabwean city of Bulawayo resulted in the deaths of several people.

These deadly acts occurred immediately after addresses by leaders of both countries, which are significant forces in modern African history.

Newly appointed Prime Minister Abiy Ahmed came to office earlier this year amid a rise in demonstrations by opposition groups demanding reforms. Abiy succeeded former Prime Minister Hailemariam Desalegn who served in the position after the death of Meles Zenawi in 2012.

Hailemariam oversaw the arrests of many activists said to have been involved in protests beginning in 2016. The unrest began among the Oromo people in the south of the East African state and later spread to areas inhabited by the Amhara. The previous prime minister resigned from his governmental post as well as Chairman of the ruling Ethiopian People’s Revolutionary Democratic Front (EPRDF).

Since taking the highest governing position in Ethiopia, Abiy Ahmed has released thousands of people held for political reasons from prisons, allowed exiles to return home and is embarking upon a process of normalisation of relations with neighbouring Eritrea.

At a large gathering of tens of thousands at Meskel Square in Addis Ababa on 23 June 2018 an explosion was heard just seconds after Abiy had returned to his seat from the rostrum. The prime minister was rushed from the scene while panic ensued within the crowd.

It has been reported that two people died in the attack and 156 were injured, eight of whom seriously. In the subsequent investigation of the incident approximately 40 people have been detained for interrogation.

Several police officers were arrested for failing to secure the site of the explosion. A Deputy Police Commissioner of Addis Ababa was also taken into custody related to the failure to prevent such an attack.

Abiy spoke to the nation over Ethiopian Television after the incident saying that those responsible would not be successful in halting the process of democratisation and the transformation of the national economy. He noted that there was widespread support for his policies, which would not be reversed.

Abiy went on to claim that the grenade attack was part of a broader plan involving infrastructural and economic sabotage. These operations were designed to undermine the ability of the new government to effectively respond to a security crisis.

The prime minister continued in a separate statement claiming: “It has been proven that the attempt to disrupt the rally involved other plots in addition to hurling the grenade. First, a power outage and a telecommunications network disruption coincided with the event. Second, coordinated acts of economic sabotage are being undertaken to worsen the cost of living and thirdly, various agencies meant to provide different services to the public are being prevented from delivering.” (Channel NewsAsia, 29 June)

Nonetheless, the government believes those responsible for the attack may strike again and is taking measures to prevent any further attempts at destabilisation. Ahmed Shide, the director of Ethiopia’s Government Communication Affairs Office warned: “There is suspicion that these forces whose bid was foiled may strike again in different parts of the country.” (Reuters, 27 June)

On the regional foreign policy level, Abiy is offering a plan to end the two decades-long border dispute with Eritrea around Badme. Tens of thousands of troops from Eritrea and Ethiopia died in battles, which occurred in 1998 and 2000.

Eritrea had waged a 30-year war of independence between 1961 and 1991 when the socialist-oriented government of Col. Mengistu Haile Mariam collapsed. In 1993, after a nationwide referendum in Eritrea, the country was recognised as an independent state by the Organisation of African Unity (OAU, the predecessor to the African Union—AU) and the United Nations.

A high-level delegation led by Eritrean Foreign Minister Osman Saleh arrived in Addis Ababa, Ethiopia for talks on the normalisation project. Although this has been welcomed by many domestically and internationally, there are still those within the border areas in Ethiopia who are concerned about the implementation of an agreement brokered in Algeria by the OAU in 2000.

Resistance to the peace plan is reportedly coming from elements within the Tigray People’s Liberation Front, which has been the dominant grouping within the EPRDF since 1991 when Meles came to power. The Tigray people are a minority within Ethiopia and their role in administering the multi-national state has been a source of conflict over the last two years.

At White City stadium in the second largest city in the Southern African state of the Republic of Zimbabwe on 23 June, an assassination attempt was carried out against President Emmerson Mnangagwa, his two vice presidents, their wives, along with other top cabinet ministers and officials of the ruling Zimbabwe African National Union, Patriotic Front (ZANU-PF). Two people have died so far as a direct result of the grenade thrown towards the stage where a rally had just ended.

Dozens of other people were wounded and injured by shrapnel from the explosion. Vice President Kembo Mohadi and Minister of Environment, Climate and Water, Oppah Muchinguri-Kashiri (who is also Chairperson of ZANU-PF), both long-time members of the party, were later airlifted to the Republic of South Africa for more specialised treatment.

Even though more than a week has passed since the incident, not one suspect had been reportedly arrested in connection with this egregious breach of national security and treason. President Mnangagwa, who came to power late last year in the wake of the forced resignation of former President Robert Mugabe, was quick to suggest that the assassination attempt was not the machinations of the people of Matabeleland, where Bulawayo is located.

A profile of one of the fatalities in the 23 June grenade attack was laid out in an article published by the state-controlled Zimbabwe Herald. Nelson Dube, said to have been a key figure in President Mnangagwa’s security detail, died as a result of the assassination attempt on the political leadership of the country.

The Herald report said: “He was taken to Mpilo Hospital, where he later succumbed to injuries sustained during the bomb attack on 23 June 2018. Due to the nature of his job as an intelligence officer charged with protecting the President, he was an unsung hero. Many a people from all walks of life have been mourning this unknown hero, but keen to know who Cde Nelson Dube, nom de guerre, Cde Shingirai Tichazvipedza, was.” (Herald, 29 June)

Ironically the heckling of former First Lady Grace Mugabe during a youth interface rally at the same location last November 2017, created the condition for the removal of the-then Vice President Mnangagwa. Political elements surrounding Grace Mugabe blamed Mnangagwa for the embarrassment. Mnangagwa and his supporters believed that an assassination attempt was eminent and facilitated the-then vice president’s removal from the country to South Africa.

When the military under Commander General Constantino Chiwenga took control of the national media and key government installations on 15 November, the stage was set for the resignation of Mugabe (on 21 November 2017) and the ascendancy of Mnangagwa as president and Chiwenga himself as Vice President. ZANU-PF is running to remain in charge of the country in national elections on 30 July 2018. Over 20 other candidates are also seeking the presidency and many more parliamentary seats.

The major candidates for the presidency appear to be Mnangagwa for ZANU-PF and Nelson Chamisa, 40, of the main opposition Movement for Democratic Change. As a condition for the new political dispensation, Mnangagwa has granted observer status to a host of international bodies, even those state entities which continue to maintain sanctions against Zimbabwe. The United States and Britain have laid down terms for the lifting of sanctions and the normalisation of relations.

One such prerequisite is the holding of elections that satisfy the requirements of these imperialist governments. The economic crisis in Zimbabwe is largely due to the draconian sanctions levelled against the ZANU-PF government and the previous five-year Government of National Unity (2008-2013).

Although no imperialist intrigue has been suggested by official sources in Zimbabwe, the former First Lady Grace Mugabe and members of the Generation 40 faction of ZANU-PF have been mentioned as possible suspects. Mnangagwa in an interview published by the British Broadcasting Corporation said that without any concrete evidence the Generation 40 people were in all likelihood behind the White City explosion on 23 June.

Jason Burke of The Guardian in a report on the incident wrote: “Many of those who were close to the former first lady have fled Zimbabwe. Opposition leaders in Zimbabwe fear the bombing may serve as a pretext for a wide-ranging crackdown by the government or the military in the Southern African state. Mnangagwa said such concern was unfounded. ‘There is no need for a security crackdown … this is a criminal activity … but of course we must make sure the population is protected … and only when we have got them are we going to be able to assess the extent to which the network is spread.’” (27 June)

Ethiopia, Zimbabwe and the strategic interests of imperialism

There is of course a long and sordid history of Western intervention in the affairs of post-colonial African states. In fact the imperialists want no genuinely independent and stable African government to exist.

Ethiopia and Zimbabwe within the African context are important state and regional entities, which have valuable natural wealth and a legacy of struggle against colonial and neo-colonial dominance. The normalisation of relations involving Addis Ababa and Asmara (Eritrea) could potentially set a standard for the resolution of other protracted conflicts, which drain monumental human and material resources.

Zimbabwe is well endowed with minerals and fertile soil. The national liberation movements from the late 19th century through the modern era were fuelled by the desire for the reacquisition of the land encompassing the enormous deposits of diamonds, platinum group metals (including palladium), coal, chromium ore, nickel, copper, iron ore, vanadium, tin and gold. The country also has lithium, chrysotile asbestos and vermiculite.

National, regional and continental unity would position the AU member states to embark upon a course of achieving economic as well as political integration. The formation of a continental state would wipe away security concerns, which provide a rationale for military collaboration and co-optation by the Pentagon, the Central Intelligence Agency and the North Atlantic Treaty Organisation groupings.

The grenade explosions in Ethiopia and Zimbabwe have been condemned by the AU, the United Nations and other international bodies. Nonetheless, ultimately the security of Africa and its governments are the responsibility of the people themselves.

As long as nations such as Ethiopia and Eritrea allow the military penetration of their armed forces, ports and state structures by imperialist military and intelligence agencies in a quest for economic sustenance, the longer Africa will remain in a dependent relationship with Western capitalism. This would hold true for Zimbabwe as well when it is compelled by the need to lift sanctions in turn to accept the monitoring of its electoral process by European and North American governments, which openly practice racism and class exploitation against oppressed peoples and the working class as a whole within their respective countries.

Mauritania is the venue for the 25 June-2July 31st Ordinary AU Summit where Chairperson President Paul Kagame of Rwanda will oversee discussions on four key areas of concern to the continent: the South Sudan conflict; Western Saharan colonial question; state corruption; and the imperatives for gender equality. There is the necessity to continue discussions on the implementation of the Africa Continental Free Trade Area, which was adopted several months ago by a number of AU member states.

However, as long as instability and dependency reign on the continent these issues cannot be adequately resolved. Concrete problems deriving from the failure to unify Africa and its people must be solved in order for sustainable development and progress to be realised in the 21st century.