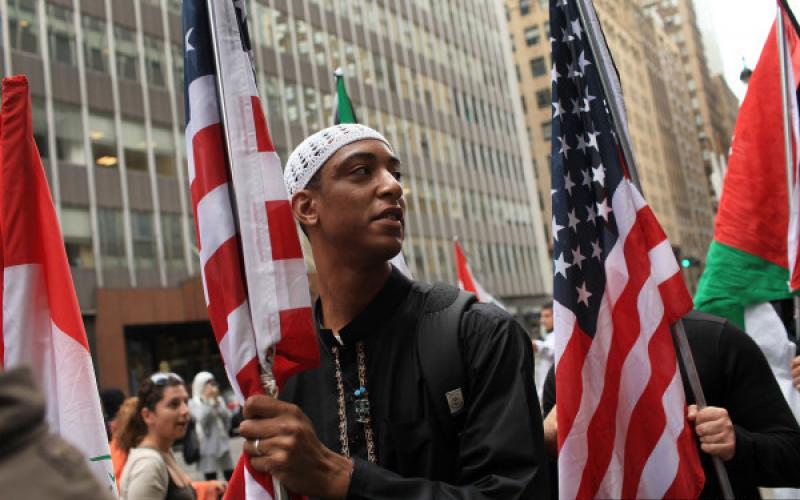 As American contradictions get sharper in the coming four years, what is needed is a rich Islamic selfhood that abides by the law of the land, is at ease with quarrelsome heterogeneity, and is confident enough to enter into open, vigorous and respectful dialogue.

At first blush, President Donald Trump is correct to identify the safety of the American Republic and its citizens as a top concern for him, and his administration. On this, there is no daylight between him and his predecessor, as well as the vast majority of the American people. But on the heels of such a large consensus, this unavoidable and immediate question arises: how must one go about the pursuit of such an enduring and important objective? It is here where President Trump’s leadership qualities fall short, his actions betray, thus far, ignorance, a small-minded vision, administrative ineptitude, and, added together, set the basis for acute alienation among many of his compatriots. The combined weight of these debilities have the real potential to disfigure cherished American national institutions that are the envy of the rest of the world, denude the country’s standing in global affairs, embolden existing nemeses, and trigger new antipathies. The immediate impact on and subsequent challenge to American Muslims, akin to numerous others in the larger American society, are only beginning to unfold.

Heretofore, American national leaders have publicly acknowledged, if not fully celebrated, the pivotal role of immigrants in the making of the United States. Perhaps it was one of America’s more substantial presidents, Franklin Delano Roosevelt, in an instructive address to the Daughters of the American Revolution, who articulated the foundational point thus:

“All of our people all over the country --- except the pureblooded Indians--- are immigrants or descendants of immigrants, including even those who came over here on the Mayflower.”

As the new president, Donald Trump has yet to publicly register his own ancestors’ debt to this precious American history, let alone enthuse about it. On the contrary, his campaign pronouncements, from the inception, have been laced with derogatory animus towards immigrants, with particular finger pointing at those who have arrived at these shores since the repeal of the National Origins Law in 1965. This re-ignition of racist othering violates the truth about the actual history of various waves of immigration to the United States, and inevitably sows new discord among American people — especially in a time of hyper global competition that makes it imperative for the country to thicken its civic mutuality and keep on valorising its democratic institutions and traditions.

But the cost will also be heavy in the international arena. The stature of the USA as a leading nation has already taken some beating in these past few weeks. The large demonstrations in many countries, fuelled by a mixture of astonishment, anger and revulsion are a worrisome signal. Unless skillfully assuaged, the long-term effects could be deleteriously multi-faceted. Around eight hundred years ago, the magnificent Muslim intellectual and jurist, Ibn Khaldoun, warned about what befalls a country whose leaders cavalierly abuse the power invested in them:

“Leadership and government serve as the world’s market place, attracting to it the products of scholarship and craftsmanship alike. Wayward wisdom and forgotten lore turn up there. In this market stories are told and items of historical information are delivered. Whatever is in demand on this market is in general demand everywhere else. Now, wherever the established leadership avoids injustice, prejudice and weakness, and double-dealing, with determination keeping to the right path and never swerving from it, the wares on its market are pure sliver and fine gold. However, influenced by selfish interests and rivalries, or swayed by vendors of tyranny and dishonesty, the wares of its markets-place becomes as dross and debased metals.”

Muslims in America were always present but have had a marginal presence. In recent decades, however, their number has grown to 3.3 million, about one per cent of the total population. Notwithstanding this growth, Muslim insignificance has been aggravated by the fall out from the events of September 11, 2001. Although hundreds of Muslims professionals lost their lives in the attack, one clear effect has been a resurgence of the demonisation of Islam — typified by the latest version uttered by President Trump. If racial profiling is a common feature of the forces of domestic order, singling out specific religious affiliation, as is the case with Muslims, is now in a new and high gear. In such a context, non- European Muslims, such as Africans who happen to be black, must think about what kind of Americans they ought to be. To be sure, the combination of these being non-European and Muslim, in the pursuit of the third, an American, can subject one to complex anxieties — a triple challenge even more daunting than the “double consciousness” so ingeniously and lastingly pointed out by the towering intellect and resilient architect of the civil rights movement, W.E.B. Du Bois. Thus, at this moment, deep-shadowing one’s Muslim identity or, at the other extreme, using it as an aggressively defensive instrument to distance those who do not belong to the faith or who interpret it differently is, at minimum, counterproductive and only accentuates marginality. As American contradictions get sharper in these coming four years, what is needed, then, is a reasoning Islam — a rich Islamic selfhood that abides by the law of the land, is at ease with quarrelsome heterogeneity, and, as a result, is confident enough to enter into open, vigorous and respectful dialogue with those who share a civic identity but follow a different set of religious beliefs.

The vast majority of Muslim Americans feels at once blessed to have become stakeholders of the American civilisation and is proud of their Islamic faith. Thus, while this moment presents some danger, it also presents potentially educating and empowering opportunities. Educating, because American Muslims could awaken to the urgency of enhancing their sophistication about American history, politics and the constantly changing nuances; empowering, because they could discover and then join hands with their rightful allies in protecting the best of progressive American civic engagement and constitutional order. Thus, by strengthening the interweaving of their evolving public spirit and the sincerest piety of being Muslims, they could position themselves well to face up to the rising conjuncture and, ultimately, confound, out-pace and then help defeat this President’s retrograde agenda.

* Ahmed I. Samatar is a James Wallace Professor of International Studies, and Founding Dean of Macalester College, Minnesota. He has written dozens of books and articles about the Third world, particularly about Africa, and the Arab region. This article first appeared in Gulf News.