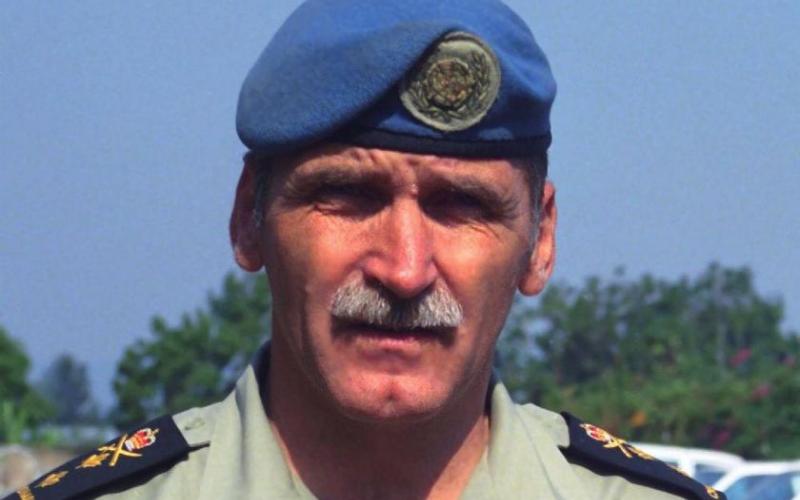 General Roméo Dallaire has gone from shaking hands with the devil to promoting Africa’s most blood-stained ruler.

Last week, Roméo Dallaire attended a screening of “Rwanda — The Royal Tour” in Chicago. The tourism documentary criss-crosses that country with Paul Kagame and the Rwandan dictator was on hand for the premiere. Six months ago Dallaire met Rwanda’s war criminal defence minister, James Kabarebe, in Vancouver, Canada and in 2016 the former Canadian general spoke alongside Kagame in Toronto.

All this despite growing attention to Kagame’s brutality and questions regarding the official story of the Rwandan genocide, which underpins his legitimacy. The president of Rwanda, who in his 2003 book Shake Hands With the Devil Dallaire described as an “extraordinary man”, has finally been revealed as a tyrant by the dominant media.

According to the promotion for In Praise of Blood: The Crimes of the Rwandan Patriotic Front, since 2015 seven front page Globe and Mail stories have included Judi Rever’s reporting on Kagame’s international assassination programme and responsibility for blowing up the presidential plane, which triggered the Rwandan mass killings in April 1994. Published by Penguin Random House Canada, The Globe and Mail and Toronto Star (provocatively titled “Did Rwanda’s Paul Kagame trigger the genocide of his own people?”) have both recently run excerpts from In Praise of Blood while Rever has been interviewed by CBC radio’s flagship current affairs show As It Happens, the Hill Times and others.

An important contribution to exposing Rwandan Patriotic Front (RPF) violence in Rwanda and the Congo during the 1990s, Rever’s book comes on the heels of Anjan Sundaram’s Bad News: Last Journalists in a Dictatorship, which describes the totalitarian regime in Rwanda. (In a sign of Kagame’s determination to stamp out all non-state controlled gatherings, the government recently shuttered 6,000 churches/mosques and arrested a half-dozen pastors for “illegal meetings with bad intentions.”) Sundaram’s book received significant corporate media attention and the British Broadcasting Corporation documentary Rwanda’s Untold Story offers an easily accessible challenge to the Dallaire/Kigali promoted genocide fairy tale.

More devastating, though less publicised, recent challenges to the Kigali/Washington/London promoted account of the Rwanda (and concurrent Burundian and Congolese) tragedies include Edward S. Herman and David Peterson’s Enduring Lies: The Rwandan Genocide in the Propaganda System, 20 Years Later and Robin Philpot’s Rwanda and the New Scramble for Africa: From Tragedy to Useful Imperial Fiction.

As part of research for a chapter on Dallaire I picked up In Praise of Blood and was surprised that Rever ignores the former Canadian general’s contribution to the Rwandan disaster and distortion of what transpired. (Dallaire is cited three times in the bibliography and none of those mentions are critical.) This cannot be by accident. It is unlikely Penguin Random House Canada would have considered publishing the Montrealer’s book if not for the former Canadian general’s role in Rwanda since, as serial Kagame apologist Gerald Caplan put it, “the personal relationship so many Canadians feel with Rwanda can be explained in two words: Roméo Dallaire.”

Conversely, however, the corporate behemoth probably wouldn’t have published Rever’s book (or dominant media covered it) if it directly challenged Dallaire/benevolent Canada mythology. Already, In Praise of Blood’s challenge to the popular understanding of the Rwandan violence pushes the bounds of mainstream politics. It would be too much to explicitly criticise Dallaire’s role in backing RPF crimes and distorting Rwanda’s tragedy to serve Kigali/Washington and his own aims.

But, directly confronting Dallaire is imperative. As I detail, the former general backed the war in Afghanistan, bombing of Libya, 2004 coup in Haiti, etc. and has called for western intervention in a slew of other places. Dallaire promotes a highly simplistic account of the Rwandan genocide designed to promote liberal interventionist policies such as the Responsibility to Protect doctrine.

At the same time “Canada’s most admired citizen” and “greatest Canadian” finalist openly backs a dictator who has contributed to millions of deaths in Rwanda and the Congo. Having played an important role in toppling governments in Kampala (1986), Kigali (1994) and Kinshasa (1997), Kagame probably has more African blood on his hands than any other individual alive today.

* Yves Engler’s the author of Canada in Africa: 300 years of aid and exploitation.