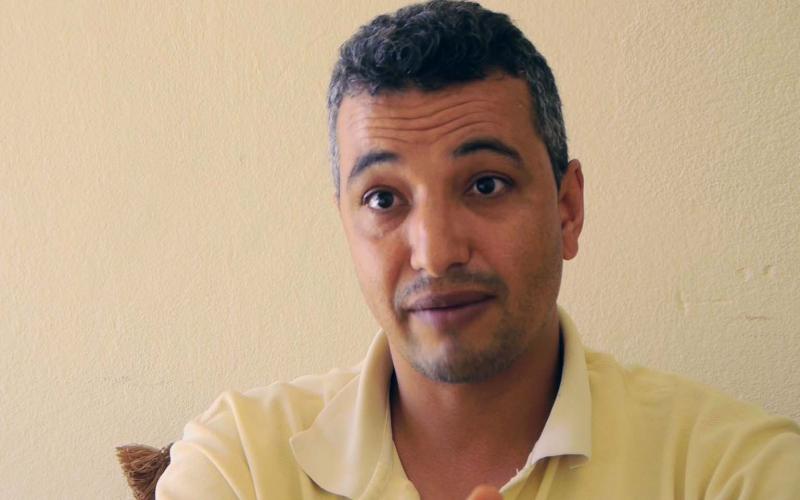 The coordinator of Saharawi video activist group Equipe Mediawas assaulted, injured and interrogated by Moroccan police in the Moroccan colony of Western Sahara.

Mohamed Mayara, media activist and co-founder and coordinator of Equipe Media that documents human rights violations in Africa’s last colony Western Sahara, was physically assaulted and injured his cheek and other parts of his body at El Aaiun airport in the occupied territories of Western Sahara on 13 January. He was beaten by several Moroccan police officers, according to the World Organisation Against Torture.

Mayara was returning from a visit to the Saharawi refugee camps in Algeria, where many of Western Sahara’s people the Saharawis fled to when Morocco invaded their country in 1975.

He had been visiting his family and participating in political activities, and was accompanied by other human rights defenders, including President of the Saharawi human rights organisation, human rights activist Aminatu Haidar.

Beaten up and interrogated

“As soon as I arrived at the main door of the airport, two policemen – Ali Boufri and Mohcen Essergholi – and eight other policemen insulted me and knocked me down and beat me. They hit me in the head but I could see what was happening. I was injured on the fingers, shoulders and jaw,” Mayara says.

“They then took me to an isolated room where they interrogated me and searched my body entirely and intrusively. They filmed me without asking my permission. Questions and assertions related to my activities with Equipe Media, and our short film “3 Stolen Cameras”. They asked me about our next projects,” he adds.

Mayara didn’t go to the hospital, he says, because he has “no confidence in Moroccan health care teams,” and hasn’t lodged a complaint with the Moroccan courts because “Morocco has neither the sovereignty nor the right of the administration of my country.” Instead Mayara says he sent e-mails to the United Nations Special Envoy to Western Sahara and the United Nations Peacekeeping Mission in Western Sahara.

Mohamed Mayara urges the international community to act, not simply on the assault of him but more generally on the Western Sahara conflict.

“Pressure must be exerted on the Moroccan occupier power to end its lies, double standards and deceitful practices. Continued United Nations inaction and paralysis in the face of Moroccan actions will be interpreted as promoting double standards in terms of international practice,” Mayara says.

“I want to call on all countries to recognise the Saharawi Arab Democratic Republic [a member of the African Union] as the representative of the Sahrawi people. This is the only way to stop the Moroccan arrogance, tyranny and dictatorship that breeds hatred, violence and chaos,” he adds.

Mohamed Mayara and Equipe Mediahave documented Moroccan repression against Saharawis who campaign for an independent Western Sahara since 2009. A dangerous feat in a colony that an Amnesty International campaign in 2015 focused on as being one of the most torture-prone regimes in the world and American independent watchdog Freedom House rates as being more repressive than Saudi Arabia.

This was by no means the first time that Mohamed Mayara has been assaulted by Moroccan police. According to Mayara, he has been harassed, arrested and tortured by Moroccan police several times, as well as being constantly under surveillance and receiving death threats. Human Rights Watch documents this harassment as going at least as far back as 2005.

Several other journalists from Equipe Mediaalso say they have been beaten and tortured by Moroccan police, forced to sign false confessions, and given jail sentences.

Father was tortured to death

Mohamed Mayara’s father was kidnapped, tortured and killed by the Moroccan colonial authorities in 1977, when he was a year old.  “I try to teach [my seven-year-old daughter] that one day, I will face the same fate,” Mohamed Mayara told Democracy Now in November 2018.

The documentary about Equipe Media, 3 Stolen Cameras was produced by Equipe Media and Swedish film collective RåFILM, and released in 2017.

*Peter Kenworthy is a freelance journalist.