On 15 September, Rwandan political prisoners Victoire Ingabire and Kizito Mihigo walked out of Nyarugenge Prison in Rwanda’s capital, along with nearly 2000 more Rwandan prisoners whom President Paul Kagame had granted “executive clemency.” Members of local and international media surrounded them with still and video cameras as they emerged.

Victoire Ingabire is a politician and member of Rwanda’s Hutu ethnic majority. She had been sentenced to 15 years in prison for terrorism and minimising the Rwandan Genocide after she attempted to run against President Paul Kagame in 2010. She served eight years, including five in solitary confinement, before her release this week.

Kizito Mihigo is a gospel singer and a member of Rwanda’s Tutsi minority, who went to prison in 2015 for terrorism, plotting to kill President Kagame, and minimising genocide. He had just recorded a music videoin which he sang that both Hutu and Tutsi had lost loved ones in the 1994 massacres known as the Rwandan Genocide, and that both must acknowledge one another’s suffering to reconcile.

Victoire, as she is commonly known, has often said the same, as in this statement added to Song for Madame Victoire Ingabire, which was recorded to celebrate her heroism while she remained in prison.

“Let me tell all Rwandans that what we wish for is that all of us should work together, to make sure that such a tragedy will never take place again. That is one of the reasons why the political party Forces Democratiques Unifiées[UDF] made a decision to return to the country peacefully, without resorting to violence as many people think that the solution to Rwanda’s problems is to resort to armed struggle. We do not believe that shedding blood should resolve problems. When one sheds blood, the blood comes back to haunt him or her.”

Charging these two Rwandan leaders with terrorism was ludicrous to say the least.

Victoire emerged wearing a bright red dress and lime green jacket, the colours of her political party, UDF, which has not been allowed to register and was therefore unable to field her as a candidate against President Paul Kagame in 2010. Rwandan prisoners’ heads are shaven, but it looked as though she had been allowed to let hers grow into a short natural for perhaps a week or more.

Kizito, as he is commonly known, emerged in an orange cap and a white and orange t-shirt, both bearing the logo of Kizito Mihigo pour la Paix, the foundation he created to promote peace. 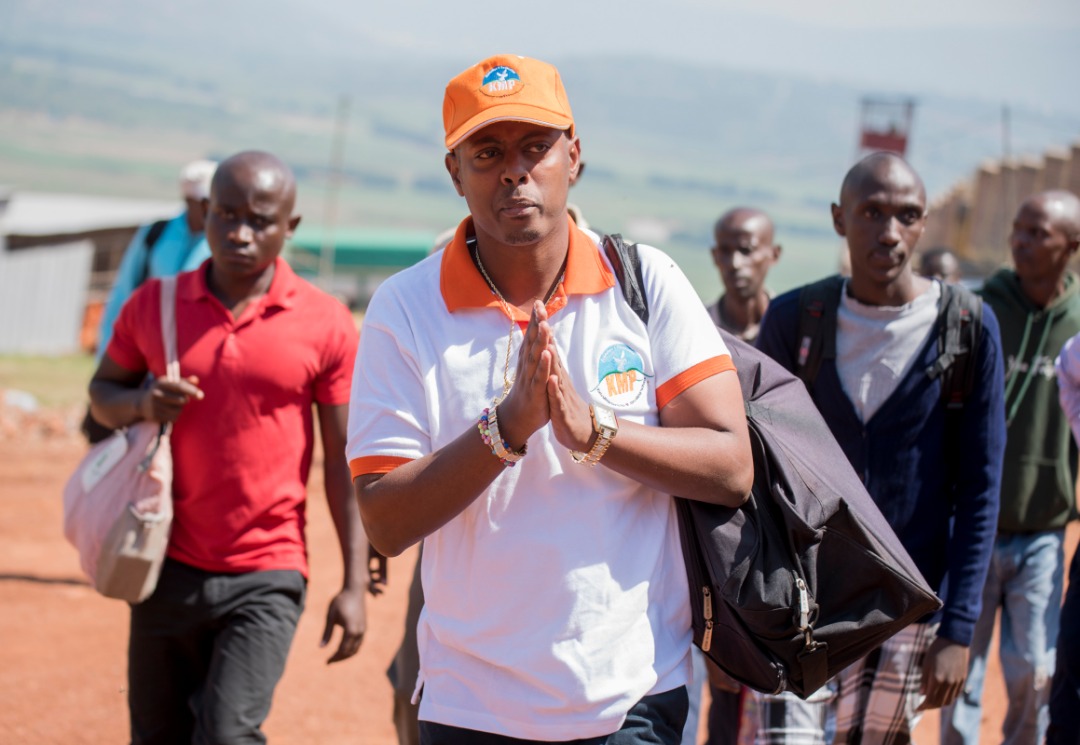 President Paul Kagame granted Victoire “executive clemency,” which will not allow her to run for political office. For that Kagame would have to convert her executive clemency release to unconditional release. Both Victoire and Kizito are on parole, required to report to authorities once a month. Victoire is unable to leave the country to meet her two grandchildren, both of whom were born in the Netherlands during her imprisonment.

According to Marcelline Nduwamungu, a founding member of Réseau international des femmes pour la démocratie et la paix(Women’s International Network for Democracy and Peace), Victoire has returned to a house in Kigali that a group of her supporters lived in to advocate for her and prepare food to take to her in prison. They are all in prison now, so she returned to an empty house. Phone and Internet connections are still being arranged, but Deutsche Wellesucceeded in arranging an interview, in which she said that she would continue trying to open political space and free all political prisoners, and that she did not fear returning to prison herself. She also said:

Many people have asked why Kagame chose to release Victoire, Kizito and more than 2000 other prisoners now. Victoire herself told Deutsche Welle:

“I don’t know if there is any other tactic [behind my release]. I still believe that he did it because he thinks it is time to open the political space in Rwanda because that is the only guarantee to the security, to the sustainable development in our country. And it is the better solution to better prepare the future generation of our country.

No one who is not in Kagame’s confidence can know what motivated him, but this is the context in which he released Victoire, Kizito, and more than 2000 other prisoners:

2) Victoire and Kizito Mihigo are both celebrity prisoners known outside Rwanda. In 2016, a Spanish representative to the European Parliament introduced a resolution calling for Victoire’s freedom and succeeded in getting it passed.

3) The most prominent Western powers and politicians have heroised Kagame, enshrined his legally enforced lies about the 1994 genocide, and applauded his ascent to the presidency of the African Union, so they may have demanded he polish his image. The powerful Washington, DC-based Brookings Institution invited him to talk about neoliberal reforms as soon as it was announced that he would be the next African Union president.

4) President Kagame is quarrelling with Ugandan President Yoweri Museveni, whose international reputation has taken a nose dive because his armed men beat up Afropop star Bobi Wine so badly that he had to leave the country in a wheelchair, after a long list of internationally known musicians and other prominent figures demanded his release from prison. Wine, still walking with a cane, has appeared on the Voice of America’s Straight Talk Africa and testified in Congress, which could mean the beginning of the end for Museveni. Kagame and Museveni are both longstanding United States allies and “military partners” on the African continent, and Kagame would do well to appear as the more respectable partner.

*Ann Garrison is an independent journalist based in the San Francisco Bay Area, United States of America. In 2014, she received the Victoire Ingabire Umuhoza Democracy and Peace Prize for her reporting on conflict in the African Great Lakes region.