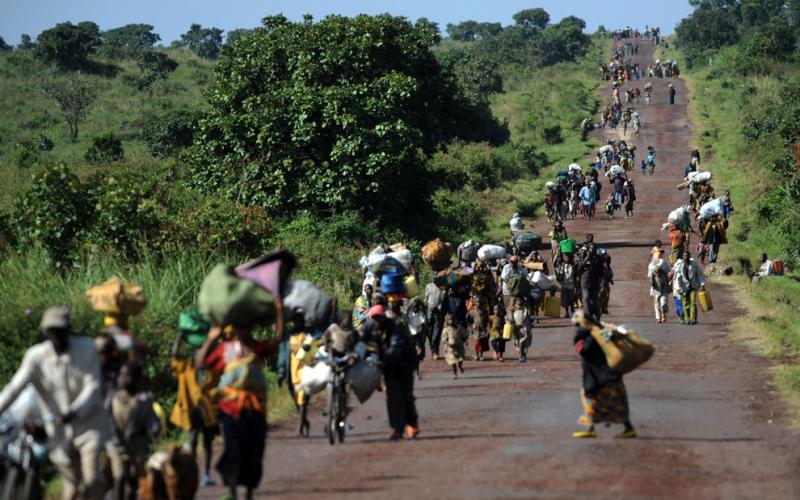 Instead of being locked in crowded camps surrounded by barbed wire, the 1.2 million refugees in Uganda are given large plots of land in sprawling settlements to build homes or, if they like, small farms. If agrarian life isn’t for them, they can move freely around the country, traveling to towns or to the bustling capital of Kampala, which 95,000 refugees call their home.

The distinguished scholar and humanitarian activist Noam Chomsky characterizes European attitudes towards refugees “[as] among the signs of the severe moral-cultural crisis of the West that is mislabeled a ‘refugee crisis.’”

According to the latest report of Amnesty International:

“Measures implemented by EU leaders to strengthen search and rescue capacity in the central Mediterranean in April 2015 dramatically decreased deaths at sea. But this priority, which saw several countries provide more rescue boats closer to Libyan territorial waters, was short-lived. Instead, EU governments have shifted their focus to disrupting smugglers and preventing departures of boats from Libya: a failing strategy that has led to ever more dangerous crossings and a threefold increase in the death-rate from 0.89% in the second half of 2015 to 2.7% in 2017.”

This “failing strategy” confirms Chomsky’s observation that what is occurring along the central Mediterranean is actually more of a Western moral crisis than a refugee crisis and racism is the real cause, for the new normal is to let Africans drown in the Mediterranean rather than save them. Can you imagine this being the case if the ones needing to survive were White people?

Libya, Egypt and Sudan are places where refugees are subjected to degrading treatment, extortion, extreme abuse and slavery as they are tortured, raped and murdered. Bribing these countries to deter or contain refugees is the ultimate cruelty and cynicism. To depend and support the Libyan Coast Guard operating in lawless Libya is to become complicit with criminal gangs. According to a UNHCR study:

“[T]he conflict and instability in the country have contributed to create an environment where human smuggling and criminal networks flourish. At the same time, the collapse of the justice system and reigning impunity have led many armed groups, criminal gangs and individuals to participate in the exploitation and abuse of refugees and migrants.”

When a reporter asked Mahatma Gandhi what he thought of Western civilization, he famously replied: “I think it would be a good idea.” President Donald Trump is talking about the defense of Western civilization these days, but where is the evidence for any degree of civilized action in his policies? Precisely because they are the most vulnerable, attacking refugees and the poor has been the distinguishing hallmarks of his presidency thus far. The United States is increasingly a stingy and heartless bystander when it comes to refugees and other vulnerable populations. The United States and Britain as well are the leading merchants of weapons spearheading military interventions, yet they are hesitant to deal with the clean-up of the mess created by the current refugee exodus from war-torn countries awash in those very weapons.

The five wealthiest countries [the U.S., China, Japan, the U.K. and Germany]— which make up half the global economy — are hosting less than 5 percent of the world’s refugees, while 86 percent of refugees are in poorer developing countries that are often struggling to meet the needs of their own people.

Uganda, on the other hand, through its compassionate policy towards refugees, exemplifies the moral high ground abandoned by the United States under President Trump and, frankly, even to a lesser extent under former President Obama. There have been many remarkable testimonies on Uganda’s exceptional reception of refugees. Julian Hattem writing for the Washington Post states:

“Instead of being locked in crowded camps surrounded by barbed wire, the 1.2 million refugees in Uganda are given large plots of land in sprawling settlements to build homes or, if they like, small farms. If agrarian life isn’t for them, they can move freely around the country, traveling to towns or to the bustling capital of Kampala, which 95,000 refugees call their home.”

This generous policy comes at a huge price for Uganda as Bidi Bidi, the largest refugee camp in the world, has reached near a breaking point. Nevertheless, Uganda’s proactive refugee policy has been hailed as one of the best, if not the best, approach to host refugees. Unfortunately, as much as Uganda’s treatment of refugees has provided a model for how a civilized country deals with refugees, many countries in Africa have been a hellish nightmare for African refugees.

Sudan, Libya, Egypt and South Africa are horrific places to be a refugee. Refugees have been burned alive by South African mobs. There are few options for refugees and there are also very limited opportunities for resettlement: of the 16.1 million refugees of concern to the UNHCR around the world at the end of 2015, less than one per cent were resettled that year.

In contrast to Uganda, Europe and other wealthy countries are increasingly shunning refugees. Ignoring the plight of drowning refugees in the central Mediterranean off the coast of Libya has become the new normal. To discourage crossing the Mediterranean, European countries replaced the stronger Italian rescue operation, the Nora Nostrum, with Triton. The Triton operation was expected to complement the Nora Nostrum; instead it replaced it with no clear mission and with a stated function of “border management” within 30 nautical miles from the European border. The worry was that the Nora Nostrum was a “pull factor” for refugees from Africa.

The securitization of border control has gone a step further, with NATO launching naval patrols ostensibly to hunt for human traffickers in the eastern Mediterranean and for the first time returning refugees to Turkey. In 2017, Europeans have left it to the Libyan “Coast Guard” to apprehend refugees in boats at sea and force them to disembark back in Libya, where these same refugees become victimized again and again by gangs also purporting to belong to the Libyan Coast Guard. This situation is a logical extension of the “fortress Europe” mentality. These gangs have shot at refugees, and others have drowned during panics when approached violently by these gangs.

In contrast, European citizen humanitarianism, the ever exemplary NGO Médecins Sans Frontières (MSF) and Save the Children, private initiatives like individuals like the Moroccan-Sicilian Nawal Soufi, who uses her mobile phone as a lifeline for refugees in boats braving the Mediterranean, have helped save lives. The humanity of ordinary people from the island of Lampedusa is depicted in the film, Fire at Sea by Italian director Gianfranco Rosi, which won the Golden Bear prize at the Berlin film festival. It tells the story of the migrant crisis through the eyes of locals. Some ordinary fishermen and humanitarians have responded humanely during incidents where ships left refugees to die to avoid any responsibility. “According to Frontex, the EU border and coastal protection agency, around 40 percent of all rescue operations are carried out by volunteers.” Survivors of one of the worst shipwrecks in recent European history, in which 366 people died on october 3rd 2013, off the Italian island of Lampedusa, reported that boats nearby did not help. But these NGO’s are now under attack falsely accused of complicity with smugglers and encouraging refugees to make the dangerous trip across the Mediterranean.

In Europe, attitudes towards refugees are only hardening. More legal as well as physical barriers are being put in place. Razor wire fences are erected, the demonization of refugees as swarms, infiltrators, criminals, vermin, terrorists and threats to security, welfare-fleecing parasites gets heated, and their desperation only grows. The various barriers do not curb irregular migration but only serve to increase the death toll and do not stop refugees from trying to get around these obstacles. Human beings do what they need to do to try to survive.

A Europe-wide agreement could easily and definitively define an asylum seeker and standardize legal rights and standards for their reception and treatment, but the future is more likely to be more fences and restrictions as governments face more and more extreme challenges from right-wing political parties. These challenges tend to be acrimonious, with blame for the refugee crisis oscillating between the front-line states (Greece, Malta, Spain and Italy) and non-front line countries (mainly Austria). The non-front-line countries blame the front-line countries for allowing more refugees to cross their borders and for not taking measures to guard their own borders, resulting in threats to exclude the front-line states from the privileges of Schengen.

In the current EU meeting in Estonia, responses to the refugee crisis centers on restricting the activities of life-saving work by NGO’s and on collaborating with African dictators and the so called Libyan Coast Guard in order to return refugees into the conditions from which they fled. “About half of the more than 90 million euros ($103 million) allotted for the refugee crisis on the Mediterranean route is to be spent on the providing the Libyan coast guard with more weapons and training.” Blaming NGO’s is in reality a diversion from the lack of inaction and impotence of the European Union. According to a study done by the Forensic Oceanography branch at the University of London:

“As long as migrants are forced to resort to smugglers for lack of legal pathways, proactive Search and Rescue at sea will be a humanitarian necessity – whether it is operated by states or NGOs. Only a fundamental re-orientation of the EU’s migration policies to grant legal and safe passage may bring the smuggling business, the daily reality of thousands of migrants’ in distress and the need to rescue them to an end.”

Uganda points the way forward. Uganda is a wonderful model for compassionate hospitality towards refugees, but the country is reaching a breaking point due to increasing demands for civilized accommodation of the large numbers of refugees. What was promised for Uganda from donors, during last year’s high level summit in New York has not been forthcoming. Supporting viable resettlement programs and working towards durable solutions is the only way to resolve the crisis. Part of what I view as a durable solution is using leverage to promote human rights and good governance in refugee producing countries. At present, increasing life-saving rescue operations in the Mediterranean is the right thing to do. Bribing the dictators who are the very reason for these flights is cruel and uncivilized.

* YOHANNES WOLDEMARIAM is an educator and author. This article previously appeared in the Huffington Post.