Home » Human Security » What is the solution to the over-policing of blacks?

What is the solution to the over-policing of blacks? 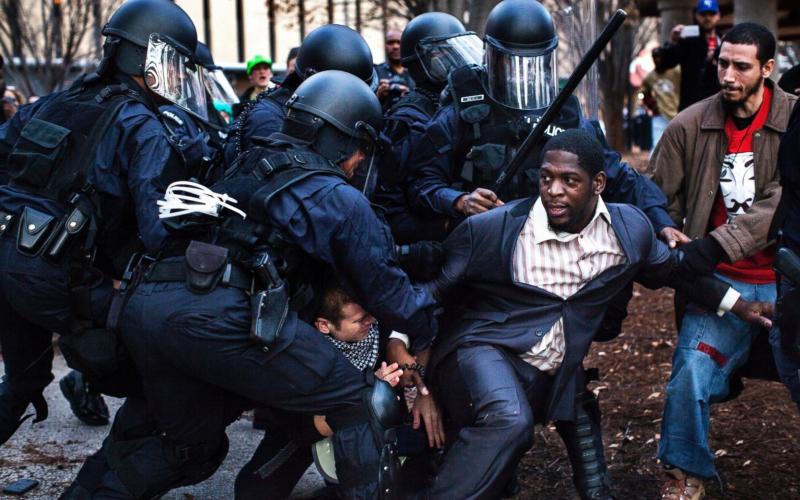 Blacks are being incarcerated at disturbingly high rates for seemingly minor infractions in the United States. The cost of posting bail is often relatively exorbitant for indigent blacks, who end up remaining in jail, as their rights are further infringed on. Despite the disproportionately high incidence of black arrests, African Americans do not necessarily violate the law more than other ethnic groups, but may in fact, be victims of over-policing and prejudice exhibited by rogue members of law enforcement. Having more black lawyers may save black men from jail.

In October 2017, a retired New Jersey police chief, Frank Nucera, Jr., a 60-year-old of Bordentown Township was arrested, for hate crimes and violating the civil rights of an African American suspect under custody. A complaint cited that he demonstrated “intense racial animus” towards blacks. A department member, who had been concerned by Nucera’s increasingly racist remarks surreptitiously, recorded the police chief. Former chief Nucera was recorded saying, “[t]hese niggers are like ISIS, they have no value. They should line them all up, and mow ‘em down. I’d like to be on the firing squad.”

Acting US Attorney William E. Fitzpatrick gave his take: “Chief Nucera harboured an intense, senseless, irrational and bigoted view toward African-Americans.” To be clear not all law enforcement officers are as egregiously racist and opprobrious as former chief Nucera. In fact, he was outed by a colleague, who was offended by his ignoble actions and intense racial animus towards blacks. Perhaps, these are the exceptions and not the rule—that is the former chief’s ignoble actions and the unmasking of an officer by a colleague are arguably rare.

However, we need more officers that are able to stand in the gap like Nucera’s colleague, who unmasked him. The more officers realise that they serve the public and the sacrosanct laws of the United States, and not the bonhomie system of the police force, perhaps the less instances of police abuse that will arise.

In 2016, the Governor of Maine, Paul LePage was caught making overt racist remarks to the effect that, “the enemy right now…are people of colour or people of Hispanic origin.” Governor LePage had made these comments in response to being asked to clarify a statement he had made earlier. Governor LePage had claimed Maine’s heroin problem was caused by “guys by the name D-Money, Smoothie, Shifty.” LePage alluding to people of African American descent stated that “[t]hey come up here, they sell their heroin, then they go back home [Connecticut and New York]. Incidentally, half the time they impregnate a young, white girl before they leave.”

Governor LePage claimed that he had a binder cataloguing drug arrests in the state of Maine, and it showed that over 90 percent of the offenders were blacks and Hispanics. However, after failing to supply the binder from which he cited his claims, upon being requested to do so, The Portland Press Herald published Federal Bureau of Investigation statistics showing that 1,211 people were arrested on charges of drug sales or manufacturing in Maine in 2014. Of those arrests, 14.1 percent were blacks and almost all the rest were white. This data contradicted Governor LePage’s claims that over 90 percent of the drug related offenses and arrests in Maine involved blacks and Hispanics.

Even model black citizens are not immune from discriminatory and hostile actions of rogue elements in law enforcement. In July 2009, the world was shocked by images and headlines of famed black Harvard University Professor and television personality, Henry Louis Gates, Jr., handcuffed and flanked by two burly police officers on his front porch. It was later revealed that the diminutive senior citizen and host of a popular genealogy TV series on Public Broadcasting Service, was arrested by a white police officer, who had responded to a false alarm of a break in. A passer-by had noticed Professor Gates climb in through the window of his house and called the police. Professor Gates, who had just returned from a trip from China, had forgotten his key, but had left his window open as a precaution and climbed through it.

However, after the arresting officer found Professor Gates in the house and determined the situation was fine and Professor Gates was appropriately identified as being authorised to be there as the rightful owner and occupant, in a display of arrogance not befitting a public servant, Sergeant Crowley arrested Henry Louis Gates for asserting his rights, in his own home. The unsettling image of the diminutive, cane-wielding senior citizen being straddled by two burly officers and apparently bullied and dehumanised in his own home, caused national consternation. Who would have thought Professor Gates’ cane could suddenly transform into a Beretta semi-automatic shotgun and endanger the lives of the burly fully-armed officers? All charges of “disorderly conduct” were dropped after Professor Gates was summarily intimidated, harassed and humiliated by a cop.

Sergeant Crowley’s colleagues at the scene, failed to stand in the gap and show the equanimity to act as reasonable officers serving the laws, integrity and people of the United States. Instead, they subscribed to the buddy culture and groupthink that are harming the police force and which undermine the laws of the United States, and their duty to protect the public.

It is not uncommon for the news to report the release of black men finally exonerated through incontrovertible evidence (such as DNA analysis) after languishing in jail for a good portion of their adult lives. Wilbert Jones, who was wrongfully convicted and jailed after being picked out from a line-up for a rape that occurred three months prior to his being erroneously identified, spent almost 50 years in jail for a crime he never committed. He is now 65 years old. There is the need to stop the wasting of black lives. What is the solution?

One solution to the cop menace on black lives

Being a lawyer is no trite affair; and being a black male lawyer provides an opportunity to address the egregious abuse by rogue cops and reverse the spate of unjust incarcerations. Just like Harvard Law Professor Ronald Sullivan has done, by helping to exonerate wrongfully convicted black citizens through the Conviction Review Unit. Furthermore, black male lawyers may serve as a counterpoint to the unfair presumption of guilt that hovers over black men. A black male lawyer, Thurgood Marshall, and his team, won the judgement in Brown v. Board, which overruled the discriminatory segregation laws that dehumanised blacks.

As a child, I had no doubt that I wanted to become a lawyer. Everyone who knew me in my country of birth knew exactly what I was meant to do: law. Then in America, almost everyone tried to discourage me from becoming a lawyer: with most citing the overabundance of lawyers in society…claiming lawyers do not “make anything or build anything like engineers do, or heal the sick like doctors do.”

Lawyers are social engineers, who build a more just society. You want to see black engineers graduating from Massachusetts Institute of Technology or black medical doctors from Johns Hopkins? Well lawyers made it possible through Brown v. Board, by effectively declaring segregation in public schools to be unconstitutional, and setting the stage for further anti-discrimination laws that move American society toward equity and equality in fact. And remember a lawyer initiated steps towards outlawing slavery in America with the Emancipation Proclamation: Abraham Lincoln.

Regarding the proliferation of lawyers or their oversupply in a utilitarian economy: this is not applicable to black lawyers. Especially, black male lawyers. Last year I was in a class section of about 80 law students. And I was the only black male for the entire year – arguably one place that is not chocolate in “Chocolate City” – the sobriquet for Washington, DC (misnomer). In the neighbouring state of Maryland, where I lived in my first year of law school, 72 percent of the prison population is made up of black men. It is abysmal; given black men constitute less than 12 percent of the population of the state. In fact, I argue that partly because there is a dearth of black male lawyers, black men are “overrepresented” in America’s prison population. It is not necessarily the case that non-black lawyers show the sensitivity, understanding or the requisite empathy to be impassioned advocates for the black community.

Sometime ago, I compared two different tapestries of photographs: one was mostly all whites with some Asian Americans. The second one was all black men. (This process was not unlike that of Governor LePage’s viewing of the photos in his binder of drug-related arrests in Maine.) One was of graduating students entering the workforce as lawyers this year. The other one—all black men—was of people convicted and in prison.

It was disturbing when a black male law student, in a conversation, insinuated that black men were prone to crime and violence, and that was why they were possibly incarcerated at such astronomical rates. No. The answers (at least some of them) are in the tapestries of contrasting pictures. The folks sending black men to jail: non-blacks. If there were some hidden Tartarean conspiracy to paint black men as inherently criminal, even among blacks themselves – it is working. But there is an unmindfulness and callousness in law enforcement and the criminal justice system. There is a seeming lack of empathy for the plight of black men or an apparent deficit in the connection between the legal apparatus and law enforcement and black communities being “judged.” Black communities are yet to be viewed within the body politic and enforcement framework as full citizens to be protected and served by the law. Lawyers are made to unravel such things and bust “grand collusion.”

If you know any black male, no matter how old: tell him to work on becoming a lawyer. Even in jail, he can study to become a lawyer. Mandela did it. And if the black male is free, encourage him to avoid the “bling bling” and live a life of denial to get his law degree. Already married and with kids, Mandela quit his job to become a full-time student subsisting on student loans for a while. Although many uncritical detractors may complain, but like Mandela, ignore them all. Because as a lawyer, you will be in good company, among men who changed the world: Abraham Lincoln, Alexander Hamilton, Nelson Mandela, Thurgood Marshall, Karl Marx, Vladimir Lenin, and Barack Obama.

* Olurotimi Osha attended Columbia University in the City of New York and is a Doctor of Law candidate at the George Washington University Law School, in Washington, DC.