Home » ICT, Media & Security » Salzburg Global Seminar: A Marshall Plan for the mind and peace in a globalized world

Salzburg Global Seminar: A Marshall Plan for the mind and peace in a globalized world 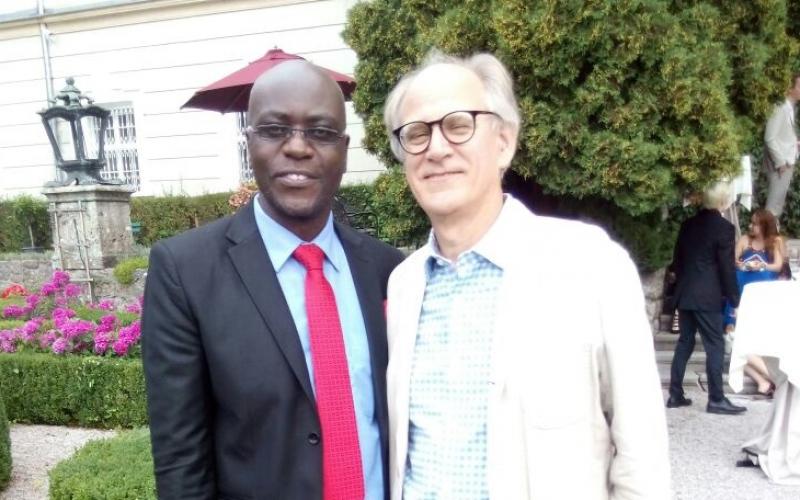 From a humble centre for American Studies, the Salzburg Global Seminar now runs several academies and programmes focusing on imagination, sustainability and justice, among other topical issues of global concern. It also produces several publications on various themes and has several institutional and individual donors and partners across the globe.

Flashback to 1945. World War II has just ended and the whole world is wounded, disillusioned and battle-weary. Europe is literally stranded and no one needs another senseless and devastating war - at least not in the meantime. The need for global peace has never been greater. What to do? Fast forward to summer of 1947. Following the ripple effects of the war, it was urgent to craft ‘A Marshall Plan For The Mind’ to midwife ideologies that would reclaim global peace and quality life.  To aid the continent’s intellectual renewal, three young visionaries founded the Salzburg Seminar in American Studies, which was later renamed Salzburg Global Seminar (SGS). The visionaries were Harvard University fellows: graduate student Clemens Heller, college senior Richard “Dick” Campbell and young English instructor Scott Elledge. They envisioned a world where great minds could congregate in a neutral environment and share ideas on how to make the world a better place to live in.

Though initially meant to be a one-off affair, its initial success prompted the founders to make it a permanent programme. While the US Government craved a quick economic recovery of Europe after WWII, the pioneers of SGS believed that intellectual reconstruction was also vital. They have since gone to the netherworld but their dream lives on: SGS continues to challenge present and future leaders to solve issues of global concern. The SGS is permanently based at the iconic Schloss Leopoldskron in Salzburg City, Austria. More than 30,000 people from about 170 countries have taken part in its programmes over the years.

The battles might have been over but the war was far from over. The years 1962-1989 were the peak of a global ideological rift known in history as the Cold War, pitting the West against the East. Again, SGS played a central role in bridging Cold War divides. Geographic expansion beyond Europe and thematic expansion beyond American studies gave the seminar an expanded role.

The next 15 years from 1990-2004 ushered in increased globalization. SGS also had to scale the emerging global village and so it moved eastwards and southwards, tackling common concerns from economics and education to the environment and peace-building. However, the challenges of the world keep changing in shape and size. This has forced SGS to change with the times. From 2005 onwards, the focus has been on people and power in the digital sphere. The seminar holds thematic sessions that tackle existing and emerging global issues.

In his 70th anniversary edition report, Stephen Salyer, the President/CEO of SGS, notes that in an increasingly interconnected and volatile world, citizens seek leaders with answers as well as opportunities to take greater control over their lives. “The work of Salzburg Global Seminar and of our Fellows remains at the forefront of leading global solutions,” he adds. SGS celebrated its 70th anniversary this year. From a humble centre for American Studies, with limited facilities, it now runs several academies and programmes focusing on imagination, sustainability and justice, among other topical issues of global concern. It also produces several publications on the said themes; and has several institutional and individual donors and partners across the globe.

Since 2012, Daystar University’s School of Communication has been represented every summer at the Salzburg Academy on Media and Global Change in Austria. The university, based in Nairobi, Kenya, is the only partner institution of the Academy in the African continent. This year’s representative to the global seminar was yours truly, a postgraduate student and Features Editor of Involvement, a student-driven monthly newspaper that showcases excellence in student journalism.

I was accompanied by Dr Rosemary Nyaole-Kowuor, Chair of the Communication Department. While briefing me on the nature of the programme, Rosemary told me that it is enriching and good for exposure. Last year’s representative was Jeremiah Kipainoi, the immediate former Station Manager of Shine FM 103.1, our university’s radio station. “The seminar was a life-changing experience for me,” he told me when I contacted him to give me a feel of the event. I can’t agree more. The other Salzburg Media Academy fellows from Daystar are: Abby Wanjiru (2012); Moses Osani (2013); Antony Lusi (2014); Leonida Kombo (2015).

After experiencing the programme, I can confess that I made the best choice in my academic life. I have been able to network with faculty and students from diverse cultures; made friends and useful contacts and learnt a lot in the process. My cultural fluency has soared considerably. Perhaps it would be a good idea if the Salzburg Global Seminar gave my university more scholarships to open the space for other students instead of granting only one per year. Food for thought…

The Salzburg Academy on Media and Global Change is an exceptional three-week research-based seminar that brings young media makers, experts and scholars together from around the globe to critique and create civic media for civic engagement that prompts social change. The 2017 summer session attracted 83 undergraduate and postgraduate students; and about 30 faculty and experts from over 25 countries and 17 universities. The 2017 cohort (SAC 11)  brainstormed on and researched case studies and narratives on global populism and extremism. This year’s theme is, Voices Against Extremism: Media Responses to Global Populism.

In this era of information overflow, objectivity in journalism has nosedived. Instead, there has emerged a post-modern relativism at the expense of fact-based reporting. We are living in a post-truth era where anything goes and populist leaders use the media to sway the masses for self-seeking agendas. Increasingly, there is a sense in which the news media slants stories of people in extremist situations. This scenario makes the media an accomplice in the global populist and extremist agenda.

Meanwhile, fake news has come home to roost. The populist rhetoric may seem far-fetched and alien but it has finally caught up with the Kenyan press as well. During the 2013 and 2017 elections, the public trust in the mainstream media in Kenya declined considerably. The media appears to have abdicated its traditional role of informing, educating and settled on merely entertaining the public (arguably the least important of its functions). In 2017, one of the most disturbing spectacles that the Kenyan media fell for and blew out of proportion was the alleged gun attack on Deputy President William Ruto’s rural home; only for it to turn out to be a machete-wielding intruder! In 2013, Kenyans had to rely on the foreign press to get objective news coverage of the electoral process, which is often steeped in controversy. When will Kenya and other countries where populism is the norm get out of this rat hole?

Although the first sitting of the seminar took place in 1947, the media segment has been held for the last 11 years. Dr Paul Mihailidis, the Director of the Media Academy, says the programme allow fellows “to discuss critical and important social issues of our time.” At the end of the session, SAC 11 fellows and faculty produced an interactive Playbook that students, clubs and organizations across the globe will use to bolster their media literacy and civic engagement. The learning guide is hosted on Medium and can be downloaded here.

A statement posted on the Academy’s website reads in part: “In today’s volatile, interconnected world, what Salzburg Global Seminar offers is more important than ever. Its relevance to global problem-solving and development of tomorrow’s leaders, and its growing base of individual and institutional supporters, ensures its prominence as a place where ‘thoughtful, committed citizens’ can continue to shape a better world.”

As I write this, the six alumni of the Academy from Daystar University have started a community of change makers to establish a local affiliate to see how we can effect some meaningful civic engagement within and without the campus environment. This community is an initiative of Dr Kowuor. In her message to us, she outlined the mandate of the group: “The goal of this forum is to bring together the great minds who participated at Salzburg Global Seminar. We need to create a symposium where you can share your experiences with Communication staff and students. We also need to document a feature article and if possible a video documentary of your experiences and exploits as change agents.”

In the meantime, we are exchanging ideas through a WhatsApp group but we will soon have a face-to-face encounter to chart a way forward. We are counting on individual and institutional support for this noble venture; for the challenges of this world are as perennial as the grass.

* TOM OLANG’ is a postgraduate communications student at Daystar University and a Fellow of Salzburg Global Seminar 2017. [email protected]